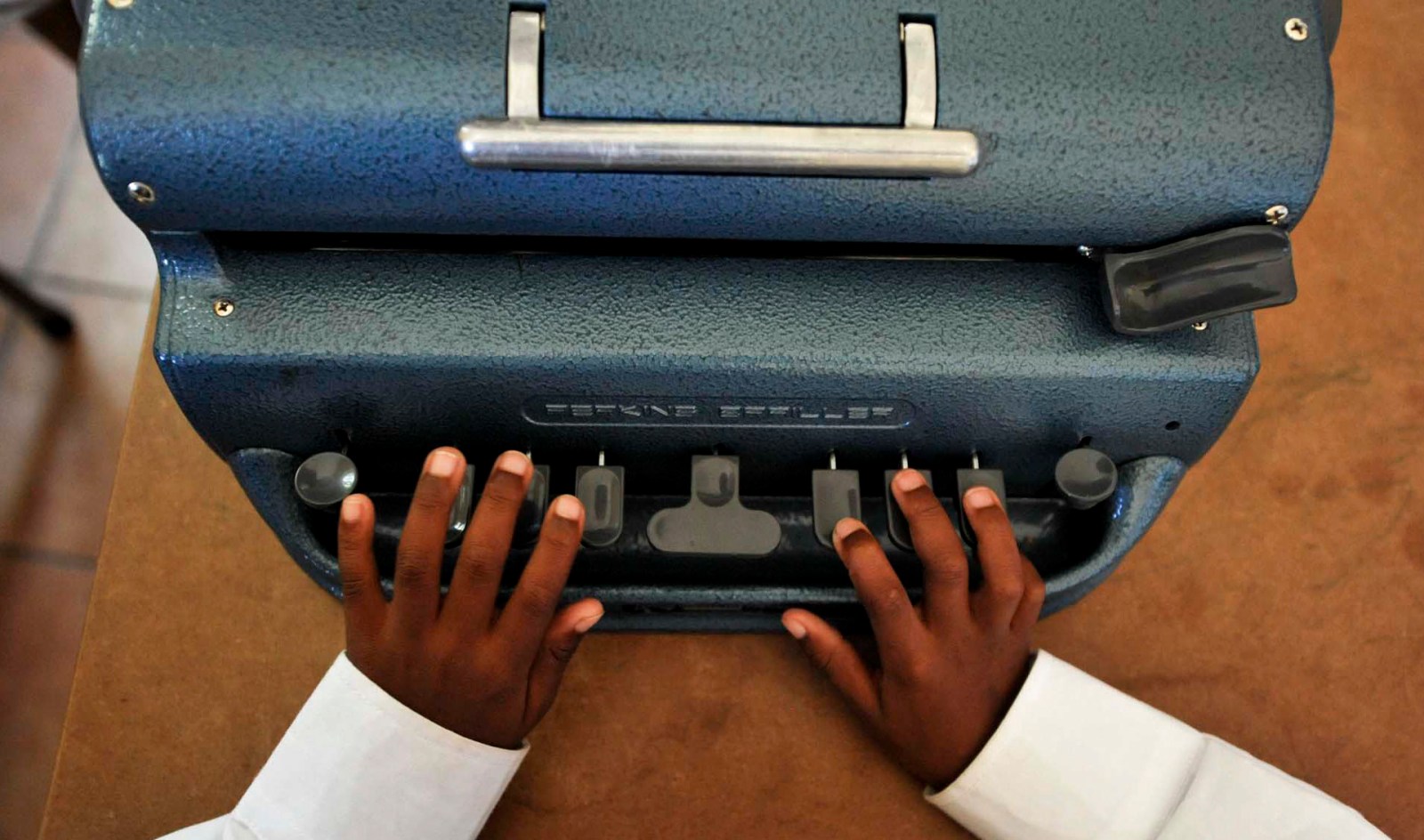 A learner in a classroom at the Christiana School for the Blind and Partially Sighted in North West. (Photo: Gallo Images / Foto24 / Bongiwe Gumede)

Nearly 50 people attended the virtual dialogue, including representatives from the Free State Department of Education and the national Department of Basic Education.

With August being Women’s Month, Letlhage says now is the time to raise their concerns and challenges through provincial dialogues that will take place throughout August.

Speaking on the daily challenges of visually impaired women, Mashele says that the Gender-Based Violence Committee interviewed women from different backgrounds, provinces, and organisations, and ascertained that they face the following challenges:

An infringement of human rights

Article 26 of the Universal Declaration of Human Rights states that “education shall be directed to the full development of the human personality and to the strengthening of respect for human rights and fundamental freedoms. It shall promote understanding, tolerance and friendship among all nations, racial, or religious groups.”

In South Africa, access to quality and equal education for learners with disabilities is very limited. This has worsened with the Covid-19 pandemic where special needs schools have been neglected in governmental decisions and considerations.

Blind SA and the Equal Education Law Centre have been negotiating with the Department of Basic Education from before the lockdown in March regarding the unsatisfactory infrastructure, lack of learner-teacher support material (LTSM), and lack of basic assistive devices and safety at schools for the blind.

Beere says that the Equal Education Law Centre has had concerns during the lockdown about the “lack of attention that has been paid to ensuring protective measures for learners with disabilities”.

The Department of Basic Education has emphasised two principles in education during the pandemic. The first is No child left behind, and the second has been the health and safety of learners.

Beere says these two principles were not applied to learners with disabilities:

“Learners with disabilities have been the last to be considered when it comes to provisioning for personal protective equipment and health and safety measures in special schools.”

Beere said the first guidelines for special needs schools were only published on 23 June, after some of the schools (particularly for learners with visual impairments) had already returned.

Beere says these guidelines were only published after “much pressure from Blind SA and other organisations of persons with disabilities on the department.

“The government allowed children to return back to a school environment despite all of their promises to the contrary, without being able to ensure those would be safe in school.”

The organisation continues to put pressure on the department to address the shortfalls. Beere says they recently obtained a court order compelling the education department to develop comprehensive guidelines for the categories of disabilities that were excluded previously. The department has three weeks to comply.

Beere says it is still a concern that it has taken this long and needed a court order to get the department to address the exclusion of those with disabilities:

“As soon as the writing pointed out it was a human rights issue, the fact that a child with a disability may require a device or a different type of PPE to ensure their health and safety is not special treatment, and is not an additional burden on the government. It is simply what they need in order to learn on an equal basis with every other child.”

Jonas (JJ) Ndlovu, a visually impaired Grade 11 pupil from Filadelfia Secondary LSEN  School says he prides himself on being who he is:

“I’m thrilled to say to you, I pride myself to be one of the different, very unique learners, and who is willing to go an extra mile to build a better society and future for visually impaired people in South Africa.”

However, Ndlovu says he is not surprised that nothing has changed with regards to the government and its treatment of those with disabilities.

Ndlovu adds that it is time for those with disabilities to no longer “look up to the government to solve [their] issues. It is about time we as individuals do something.”

The injustice of the Copyright Act

The Copyright Act came into effect in South Africa in 1978. However, to date, there have been no amendments to this act – not even for those who are visually impaired. In South Africa, republishing works into Braille is a crime with serious legal repercussions.

“In South Africa, we have a copyright law which is still active, but which is hopelessly outdated. It does not provide for copyright exemptions for persons with reading difficulties. To a large extent as a result of that, blind persons have access to less than half a percent of published material,” says Blind SAA’s De Klerk.

He says that for the past four years there has been a process of trying to get an amendment to the Copyright Act, the Copyright Amendment Bill. However, this has met with some opposition.

Devnarain says the opposition is coming from some international corporate giants based overseas, specifically in Europe and the US:

“They do not want to see me, and, sadly, they have been able to successfully get into the ear of government at the highest level. They have turned the discussion away from the vulnerable and those who are suffering the injustices of unfair exploitation. They have focused the discussion away from us and into the world of big money, commerce and corporate rights and profits.”

In his capacity as the chairperson of the SA Guild of Actors, Devnarain devised an audio-visual presentation that “is going to tell the story of human beings that are in desperate need of support that need governments to step up and stand with them and not against them”.

These presentations will launch as a promotional video that Blind SA will use in its social media campaign, #BrailleIsNoCrime. As a final voice of motivation, Devnarain says:

“We are all in this fight together and it will take nothing less than a fight. We need to stand firm, and we need to demonstrate solidarity.

“If we are not doing this, our interests will be overtaken by those huge corporate interests, by the profits, by the exploitation of the buyer by those massive publishing firms, the law firms, the international producers, because they’ve been doing this all along.