PGA Champs: Can Brooks do the three-peat? 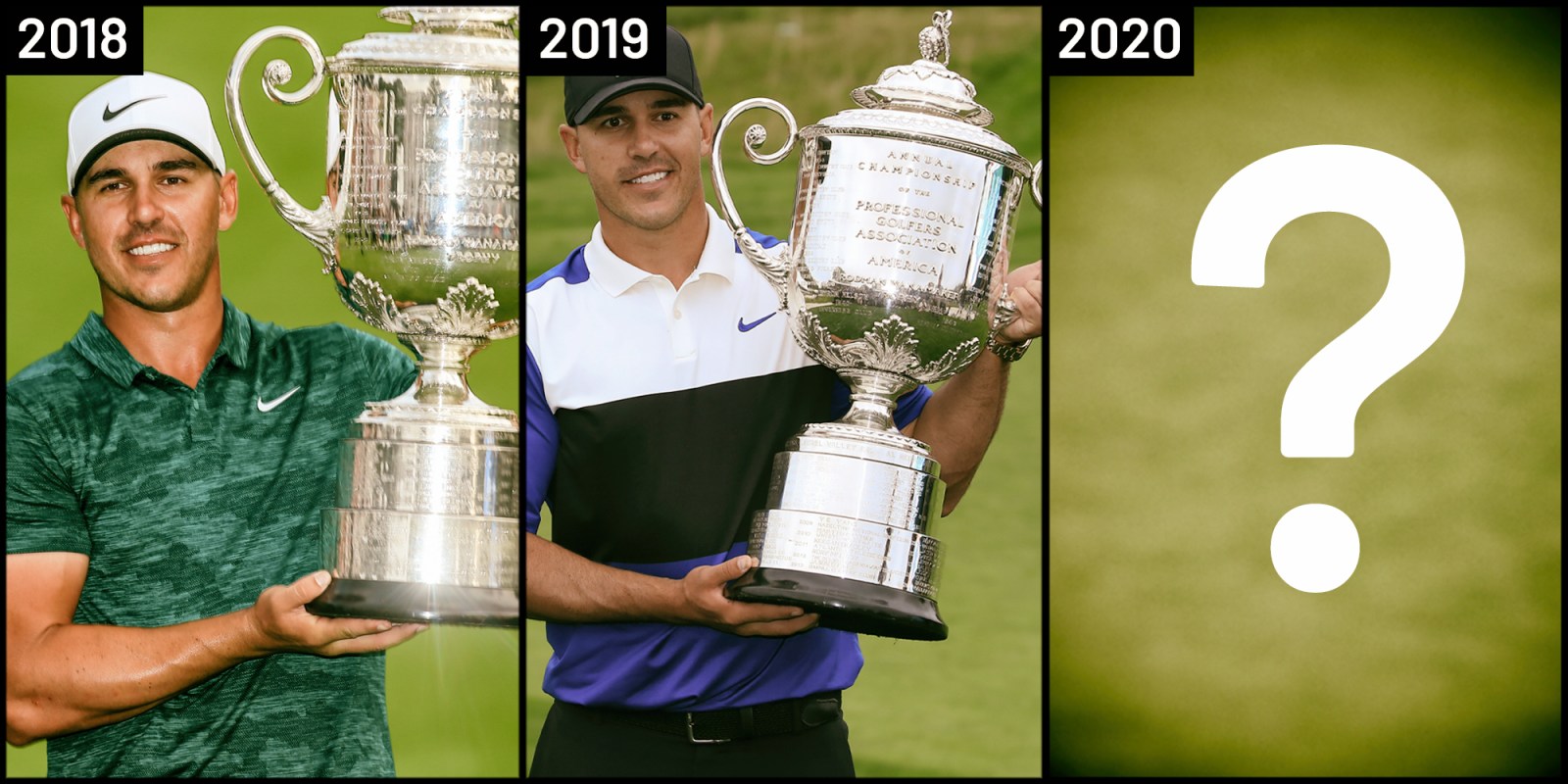 Brooks Koepka of the US poses with the Wanamaker Trophy after winning the 100th PGA Championship golf tournament at Bellerive Country Club in St Louis, Missouri in 2018, left, and Koepka with the trophy at Bethpage Black in Farmingdale, New York in 2019. Photos: EPA-EFE / Tannen Maury)

In a world desperate to return to some form of ‘normal’ amid the Covid-19 pandemic, the return of the PGA Championship to August 2020 harks back to a distant time when things were simpler – 2018.

The PGA Championship between 1969 and 2018 was almost exclusively played in August as the fourth and final major of the season. In 2019, the world’s golfing powers agreed to move it to May 2020, making it the season’s second major after the Masters.

May was supposed to be where it stayed locked in the calendar. And then came the virus. The PGA has somehow become the first major of the 2020 season after the postponement of the Masters and US Open (traditionally in April and June respectively) and the cancellation of the Open (July).

The PGA tour schedule resumed without fans six weeks ago and the PGA Championship will follow the same Covid-19 regulations at Harding Park Golf Club in San Francisco.

While everything feels different, there could be a real sense of the familiar if defending champion Brooks Koepka wins the Wanamaker trophy again. It would make him the first man since Walter Hagen in 1926 to win the tournament on three consecutive occasions.

While there won’t be thousands on course whooping for Tiger Woods and Phil Mickelson, both sons of California, or urging on Koepka, TV will bring the scene to millions.

Golf is made for television. Being able to cut between players on course, who physically could be as far as 2km apart, is one of the appeals of the TV spectacle. With 140 players in the field spread across the vastness of a course that measures just under 7,000 metres, lack of fans doesn’t detract from the electronic offering in the same way it does in sports confined by stadium parameters.

The players have also become used to the eerie calm on course. Some might even enjoy the relative lack of pressure that comes with hitting a ball down a deserted fairway. But when it comes to pressure at majors, few of the current crop of players handle it as well as Koepka.

The strapping 30-year-old Florida native has won four of the last 10 majors. A 40% strike rate at majors over three years is Woods-esque. If Koepka can claim a third straight PGA title, he would join some rarefied company. Only Hagen and Peter Thompson at the Open in 1956 have won the same major three times in a row in the modern era.

Trying to win the same major for a third time is not a new experience for Koepka, who won the 2017 and 2018 US Opens, and went into the 2019 tournament at Pebble Beach aiming for history as well. He fell short on that occasion.

“I’ve already dealt with it [the pressure] at the US Open going into Pebble,” Koepka told the media at Harding Park. “I feel like I know how to handle it and I played pretty well there. I just got beat. My game feels like it’s in really, really good shape right now. I like the way I’m hitting it, and how it feels. I’m putting it really, really well. Every day is a lot more comfortable.

“I’m excited. This is a big-boy golf course. You’ve got to hit it straight and put it in the fairway. It’s going to be quite long. I think it kind of plays into my hands.”

Koepka won’t have it all his own way though. Newly minted world number one Justin Thomas, who rallied from behind to beat Koepka at last week’s WGC St Jude Classic, is red hot at the moment. But so are several others such as Spaniard Jon Rahm, whom Thomas unseated for the No 1 ranking.

Rahm is in search of his first major title while former No 1 and four-time major winner Rory McIlroy returns to the course where he won the 2015 WGC matchplay title. Throw in Mickelson, who displayed some solid form last week, and Woods, who has hardly played this year but is always one good swing away from becoming a factor, and it’s a fascinating scenario.

Woods, who so often has fed off the energy of the galleries on course, has downplayed the issue of a lack of spectators.

“It’s different than most of the times when you go from green-to-tee, people yelling or trying to touch you,” Woods said. “That part is different. As far as energy while I’m competing and playing, no that’s the same. I’m pretty intense when I play and pretty into what I’m doing.

This is the first of three majors this year in a rejigged schedule, which will be completed by November 2020 and Woods has been preparing around the revised major dates. He is well into his 40s now, so competing at every major is vital as his pursuit of Jack Nicklaus’ record of 18 major titles continues.

“I’ve been trying to prepare for the three,” Woods said. “Trying to figure out my schedule and training programmes and playing prep and the things I need to work on for each major venue. It’s just in a different calendar order and different time of year.

“This is a big run for us coming up here. I’ve been gearing up for this, and looking forward to the challenges of not only this week, but obviously the [FedEx Cup] play-offs and a US Open and then the Masters.

“I haven’t played that much, but with the results that I’ve seen at home, I’m very enthusiastic about some of the changes.”

Straight driving will be key, as the rough is long and the weather forecast is for cool, windy conditions. The ball is not flying as far as players have been used to in the hot July conditions on tour.

“The rough out here is pretty thick,” Koepka said. “You can get some pretty juicy lies and not advance it very far. But it all depends. Is it going to be wet? I think it will be, especially in the mornings, so it could be quite tough to control your distance and spin, things like that.”

Woods added: “Talking to some of the guys yesterday, they were laughing at their TrackMan numbers already,” he said. “They don’t have the swing speed or ball speed they did last week. It’s just the way it is. It’s going to be playing longer. The ball doesn’t fly very far here. We knew that coming in. I think the weather forecast is supposed to be like this all week; cool, windy, and we are all going to have to deal with it.”

The South African duo of Charl Schwartzel and Louis Oosthuizen go into the tournament with some form, but it will be an uphill battle against some red-hot players.

Oosthuizen finished in a tie for sixth last week, a timely reminder that the 2010 Open Champion can still be a factor at big tournaments. Schwartzel, who won the 2011 Masters, also hovered near the top of the leaderboard and eventually finished in a tie for third at the 3M Open two weeks ago.

But it’s Koepka who everyone will watch. In case there was any doubt about his confidence after a knee injury earlier in 2020 and then a three-month lay-off because of the pandemic, he issued a warning to his rivals.

“The way the golf course sets up eliminates pretty much half the guys, and then from there, you know, half of those guys probably won’t play well,” Koepka said.

“Then from there, I feel like mentally I can beat them, the other half, so you’ve probably got 10 guys. That’s the way I see it. If I can do what I’m supposed to, then yeah, I should [win].

“I think that’s why I’ve played so well. I break things down very easily. I think for some reason, people make golf a lot more complicated than it should be, worrying about where shots go, results and putting more emphasis on this week or the major weeks.

“To me, it almost seems the most relaxing week of the year. I feel like Monday to Wednesday I conserve mental energy because I’ve got a good routine. I play nine holes or fewer pretty much every day and I leave the golf course feeling pretty refreshed. By Sunday though, I’m mentally drained.” DM