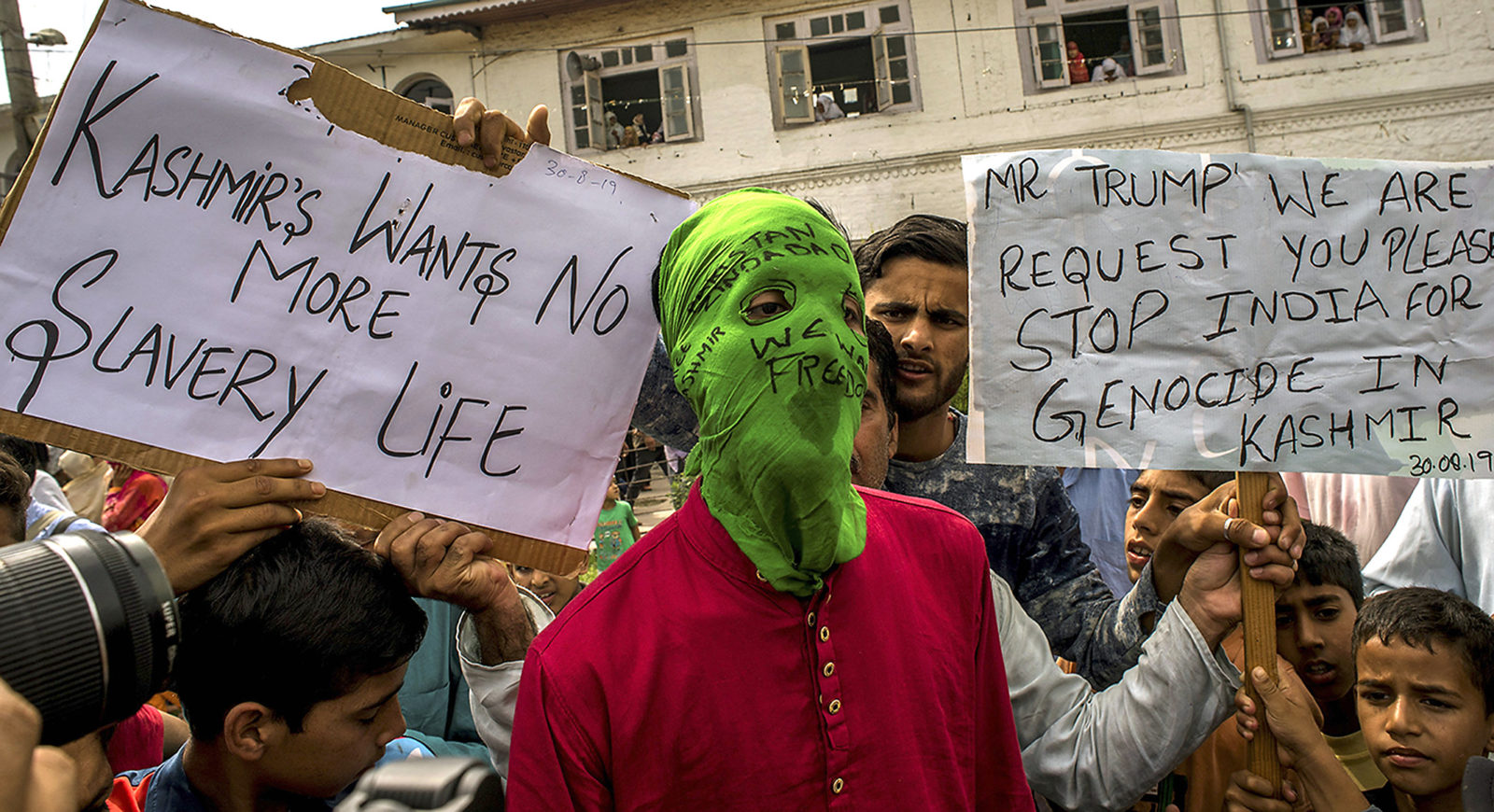 A masked Kashmir Muslim protester shouts slogans during a protest against Indian rule and the revocation of Kashmir’s special status in Srinagar, the summer capital of Indian-administered Kashmir. (Photo: Yawar Nazir / Getty Images)

This is the fifth article in a six-part series that looks at how the Covid-19 pandemic is playing out in the BRICS countries.

Unlike presidents Donald Trump and Jair Bolsonaro, President Narendra Modi did not dismiss the dangers of Covid-19. He imposed the first national lockdown, for 21 days, on 24 March 2020, when India had 600 cases and 10 deaths, declaring that the virus would be vanquished in that period.

That didn’t happen, of course, but meanwhile, his callous indifference to the travails of ordinary Indians and preference for symbolic gestures over a sustained and substantive public health response transformed the pandemic into a humanitarian crisis.

Four months later, India is growing at a faster rate than the US and Brazil, behind which it follows closely in total cases (1.5 million) and deaths (35,000). Further, as a master of manufacturing and using crises as a mode of governance, Modi has exploited the pandemic for repression, political gain and corporate profiteering.

The worst humanitarian crisis since Partition

India’s lockdown was announced at night with four hours’ notice and no arrangements in place, especially for the poorest. By the second week, workers with lost jobs or unpaid wages, daily-wage and self-employed informal sector workers all found themselves unable to afford food and rent. With no transport available, migrants to the cities were left with no choice but to walk the country’s interstate highways to return to rural homes that might offer some subsistence.

With interstate borders shut, the walkers were subject to all manner of abuse – from extortion by unscrupulous truck drivers, to police beatings for violating the curfew-like conditions, to corralling by state governments into makeshift shelters. This long march of the working poor was on the historical scale of India’s 1947 Partition. The trains that the government eventually ran in early May 2020 to take workers back to their homes (charging them full fare) brought their own troubles. More than 300 deaths resulted from these inhumane journeys.

The finance ministry “responded” days after the lockdown began, offering free rations and minimal cash support to workers who had lost their jobs. This was barely enough, and cruel given the government’s overflowing buffer grain stocks. Eventually, of course, those who made it back to their villages will be forced to return, given the failure of rural livelihoods that forced them out in the first place. With some 119 million jobs lost in the first two weeks of the lockdown itself, it is not clear what they will come back to.

While the workers’ current plight is almost entirely due to the government’s inexcusable incompetence and disregard for the poor, it offers a window into how decades of neoliberal economic policy have combined with the ruling Bharatiya Janata Party’s (BJP’s) politics of Hindu majoritarian nationalism to distribute vulnerabilities along hierarchies of class, caste, and regional and religious identity.

India’s estimated 120 million migrant workers are part of a footloose proletariat whose ranks have been swelled over decades by the combined effect of agrarian crisis and the loss of rights over land and commons as a result of mining, dam building and industrial expansion. These precarious workers eke out a marginal living in India’s vast informal sector, their cheap and disposable labour used to build and run the cities that they can’t afford to live in.

Their precarity is exacerbated by the fact that the Indian republic has failed dismally to extend social rights to its poorest and most vulnerable citizens. This is especially evident in healthcare. Never well-funded, investment in public healthcare has seen a further cut under Modi as the American model of super-speciality private hospitals and privatised health insurance has been promoted. The price-gouging by private hospitals as the pandemic surged brought home to the middle classes what has long been a reality for the poor, who continue to die of treatable diseases like TB because they cannot afford treatment.

The workers who carry out essential personal care and sanitation functions inside hospitals and outside, the vast majority of whom are Dalits (oppressed castes), are last in line for personal protective equipment (PPE) and other protection. The virus arrived with returnees from abroad, but it was vegetable vendors who were brutally evicted by zealous resident welfare associations. The spread of the virus among members of the Tablighi Jamaat (a transnational Islamic sect) after a convention in Delhi in mid-March 2020, before the lockdown had been imposed, provided yet another excuse to viciously scapegoat Muslims. People from the north-east states were harassed as “Chinese” and held responsible for originating the virus.

Meanwhile, Modi made sure to strengthen his populist rapport with his core constituents – the middle classes and upper castes – calling on the people to see the lockdown as their sacrifice for the nation, and asking for their participation in grand symbolic spectacles, ably aided in this by the “lapdog” corporate media who also worked hard to absolve him of any responsibility for the humanitarian crisis.

Weak public institutions, systematically suborned by the Hindutva regime since 2014, have exacerbated the crises. The Indian Council of Medical Research, responsible for setting public health and treatment protocols, has issued data and guidelines that are frequently changing, unreliable and confusing, aimed at portraying a government in control. The Supreme Court, which has increasingly aligned itself with Modi’s Hindu nationalist statecraft, was culpably slow in directing the government to assist migrant workers.

While India’s fascist leaders couldn’t make the trains to take workers home run on time, they have been extraordinarily efficient in matters closer to their heart. The national lockdown enabled them to quell the widespread protests against the anti-Muslim Citizenship Amendment Act ongoing since December 2019. Protest sites have been cleared, and legal cases have been prepared against activists of these movements, with hundreds arrested, especially Muslim students, many under draconian national security laws.

Like the arrests of leading progressive figures despite concerns about Covid-19 in overcrowded jails, these are part of the government’s ongoing war on dissent. So is the use of emergency disaster management powers to charge or arrest journalists for reporting on failures in the state’s pandemic response.

Meanwhile, in Kashmir, the Covid-19 curfew has compounded the repression and daily hardships of the military occupation in place since August 2019.

In a classic case of “shock therapy”, the government has used the economic ravages of the pandemic to further privatise public assets. A $22-billion economic recovery package was announced in late May 2020. Broadcast as worth 10% of the country’s GDP, close scrutiny revealed the new outlay to be only 1-2% of the GDP.

Aimed at creating an “atma nirbhar” (self-reliant) India, the package advances plans to allow commercial mining of coal, increase the foreign direct investment limit in defence manufacturing from 49% to 74%, auction six more airports to public-private partnerships, and open up the space sector to private firms. Several BJP-run state governments have announced labour “reforms” that do away with basic employment standards, and an attempt is being made to ram through significant dilutions to the Environmental Impact Assessment law while parliament is suspended. “Self-reliance” has also been invoked to speed clearances to Indian companies for poorly-tested coronavirus drugs and vaccines.

A pandemic relief fund dubbed PM-CARES set up by Modi is widely suspected to be a scheme to pad the BJP’s war chest. Believed to have raised about $1.4-billion from the public and private sectors, it is a profoundly opaque operation, exempt from right to information requests, public audit or parliamentary oversight. There is little evidence so far of it being spent on immediate livelihood and healthcare needs, except for its contribution to “self-reliance” by giving large contracts for substandard ventilators to little-known, but possibly politically sympathetic, companies.

Institutional autonomy, if not quite resistant, has been asserted by some non-BJP state governments, such as that of the Left Front in Kerala, or the Congress in Chhattisgarh and Punjab, to put in place more effective pandemic responses.

Refusing to be passive victims, migrant workers have engaged in militant protests, demanding wages, food and transport. Major trade unions have demonstrated against the introduction of labour “reforms” in several states. Doctors and health workers have mobilised for back pay, better PPE and home isolation facilities for themselves.

It is above all the dense networks of social movements and civil society organisations that have picked up the task of care, and provision for the stranded migrant workers. Along with the feisty independent media, they have exposed the state’s inadequate response and pressured authorities to expand relief measures.

They have put forth new proposals for increasing public healthcare and social security, as well as for alternative economies and ways of living. Stretched thin and working under the burden of Modi’s authoritarian rule, however, no large coalition of progressive actors or social movements has emerged in response to the pandemic, unlike in South Africa.

With the lifting of the nationwide lockdown since 1 June 2020, Covid-19 cases have been spreading across the country. The monsoons have brought their annual burden of dengue, malaria, encephalitis and other mosquito-borne diseases. Climate change-related locust swarms in several states and a massive cyclone impacting the Bay of Bengal coast have added to a rural subsistence crisis, striking an economy already in freefall before the pandemic.

Modi’s chief response to all this has been to attempt to suppress bad news and put out positive, often patently untrue, spin, including the claim that India is a global leader in combating Covid-19. He and Home Minister Amit Shah have returned to their political chess games, using the BJP’s massive war chest to buy off state-level opposition legislators to ensure a majority in elections to the upper house and to topple governments in non-BJP-run states, as well as to fund the party’s campaign for the November 2020 election in Bihar.

Will all this eventually backfire for Modi? It’s hard to tell, given his solid and assiduously cultivated support base. The leader of the opposition Congress party, Rahul Gandhi, is becoming more combative, but the Congress is in disarray, and there is little sign yet of the coalition of regional and national parties needed to defeat the BJP’s electoral chokehold. Undoing its political hegemony will require a broader coalition, bringing together those – like the migrant workers – struggling for social citizenship, and those – like the Dalit and Muslim activists – facing increasing repression as they assert their right to a secular civil and political citizenship. DM/MC

Aparna Sundar is an independent researcher. Alf Gunvald Nilsen is a professor of sociology at the University of Pretoria.

This article is the fifth in a collection that comes out of a collaborative project comparing neoliberal politics and social movement responses in the BRICS countries, generously supported by the National Institute for the Humanities and the Social Sciences (NIHSS) in South Africa. It is republished with permission from The Wire, an independent online publication in India, and the original can be found here.

BRICS and Covid-19: Rising powers in a time of pandemic

Covid-19 in Russia: Mishandling has led to popular protests, but Putin remains strong