By Centre for Analytics and Behavioural Change• 4 August 2020 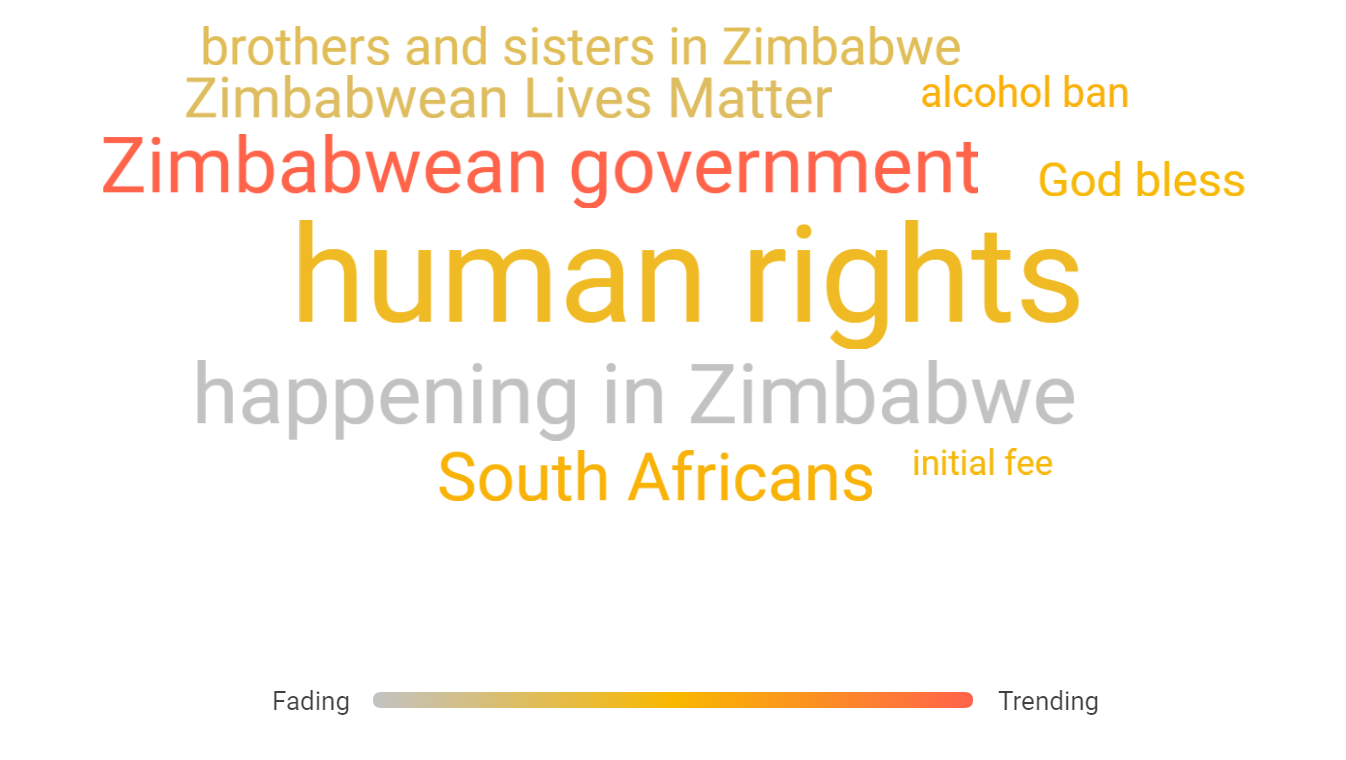 This is a summary of the trending, highest impact, and most active themes and their narratives related to social cohesion and division in South African public-domain social media conversations on 3 August 2020. 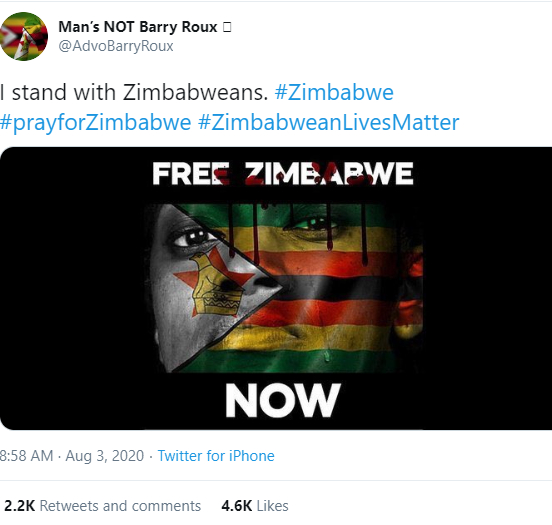 Conversation about the crisis has been building following the arrest of activists Hopewell Chin’ono, Tsisti Dangaremba and others for alleging that their government has engaged in corruption and is infringing freedom of speech.

Dr. Nkosana Moyo tweeted: “the livelihoods of Zimbabweans are being destroyed by continued corruption, disregard for the law and basic human rights, lack of decisive actions to fix the economy amongst many ills. So today I say #ZimbabweanLivesMatter,” highlighting the reasons behind the crisis faced by Zimbabweans. (5,700 likes and 2,800 retweets.)

@OrdinaryCitizein tweeted about activist Hopewell Chin’ono: “today marks the 14th day Hopewell Chin’ono is in prison. He’s a journalist who exposed the looting of Covid-19 funds worth US $60 million. The Minister of Health who orchestrated the looting sits in the comfort of his home with no accountability. #FreeHopewell #ZimbabweanLivesMatter.” (1,600 likes and 1,300 retweets.)

Twitter users called for action against the Zimbabwean government.  Africa Fact Zones explained: “#ZimbabweanLivesMatter is campaign for the release of Journalists, Human Rights Activists and Opposition Figures who are being arrested, intimidated and assaulted in the country. It’s also calling for the end of human rights abuses in the country.” (4,700 likes and 2,700 retweets.)

@Ali_Naka tweeted: “Silence is no longer an Option! There comes a time when Zimbabweans will have to defend themselves against blood sucking Tyranny. Enough is Enough #ZimbabweanLivesMatter,” asking for Zimbabweans and others to speak out against the Zimbabwean government. (2,400 likes and 1,100 retweets.)

@imisred tweeted: “The situation has reached a point where all Zimbabweans regardless of political affiliation, race, or religion need to sit down and say how can we make Zimbabwe better. Human rights must be respected COMPLETELY. #Zimbabweanlivesmatter.” The tweet received over 11,300 likes and 3,700 retweets.

South African @AneleMdoda asked: “What can be done for Zimbabwe besides retweeting guys. I don’t mean to dilute anything but really what does hitting retweet do ? Who are the tweets putting pressure on?” @Neli_Ngqulana responded: “The tweets and hashtags keep what is happening there in circulation and in the news. As South Africans, we can push our President to say something/condemn/ send a delegation. Our Pres is also the Chair of the AU, he can also use that position to put pressure on Zim…”

Social media users are growing increasingly adept at finding new ways to spread their messages. On Monday Twitter users challenged each other to tag their favourite celebrity in tweets about Zimbabwe. @antony_bee tweeted: “Hi @icecube I hope you’ll read this. The Zimbabwean government has been abducting and torturing people protesting against corruption and looting. Please help us raise awareness Copy this message and tag your favourite celebrity. Until someone hears us #ZimbabweanLivesMatter.”  (1,400 retweets and over 3,200 likes.)

Shortly afterwards, @namataik_ tweeted: “Hi @serenawilliams I hope you’ll read this. The Zimbabwean government has been abducting and torturing people protesting against corruption. Please help us raise awareness. Copy this message and tag your favourite celebrity using #ZimbabweanLivesMatter Until someone hears us.” 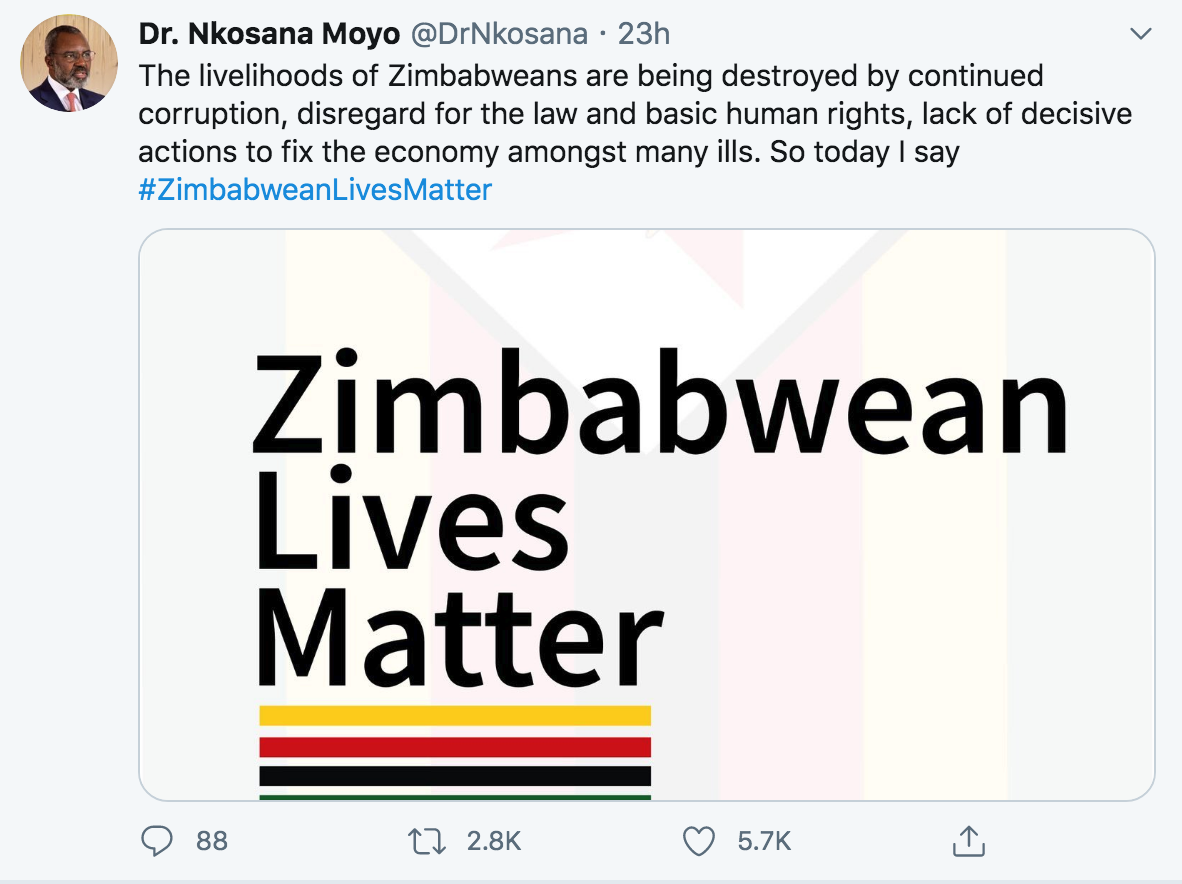 The challenge continued throughout the day as activists appealed to the global community to spread awareness about ongoing injustices.

The conversation turned to the lack of action by African governments and citizens, especially South Africa.

@aphiwemhlanga tweeted: “All the South Africans who were shouting about BLM are HELLA quiet about what’s going on in Zim. It’s very clear which black lives you were talking about smh.”  (2,700 retweets and 6,000 likes.)

Political parties were quick to join the conversation and spread their views to the growing number of social media users engaged in the topic.

@MmusiMaimane tweeted: “Eita @Trevornoah can we find a way to bring global attention to the human rights abuses in Africa. The attacks on black lives in our neighbourhood which need global solidarity. A burning topic right now is the arrests of journalists and activists in Zimbabwe #ZimbabweanLivesMatter”. This tweet received over 7,000 retweets and 16,800 likes.

South African musician @PrinceKaybee_SA echoed these sentiments in this tweet: “We know the pain and indignity of oppression first hand as South Africans! We have a responsibility to raise our voices & call for the brutality of the innocent to stop! We can’t afford to turn a blind eye to the human rights violations [sic] that are happening in Zimbabwe.”

Several artists took to their Twitter accounts to support Zimbabweans, including South African musicians AKA, DJ Tira, Maps Maponya and Ghanaian artist Ay Poyoo, who tweeted: “Peace and love to Zimbabwe. My POYOORIANS there please stay safe #ZimbabweanLivesMatter.” Collectively, these posts received over 44,500 likes and 12,300 retweets.

Dr Tumi supported Zimbabweans by tweeting: “We Stand in solidarity with the people of Zimbabwe. May God bless Zimbabwe and cause peace and justice to reign. #ZimbabweanLivesMatter.” The tweet received over 7,800 likes and 2,900 retweets. 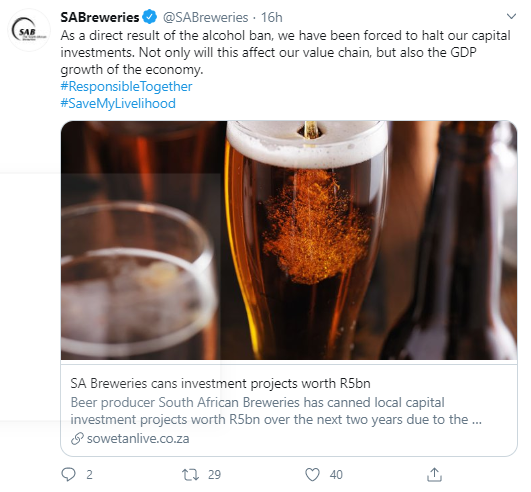 Most other topics were dwarfed in comparison to the Zimbabwean narrative on Monday. A few posts about the economic consequences of the lockdown drove conversation.

South African Breweries (SAB) announced on Monday that it would halt investments worth around R5-billion over the next two years because of the alcohol ban. SAB finance vice president Andrew Murray explained that they had lost 12 full trading weeks as a result of the ban on alcohol sales, leading to significant operating uncertainties.

@TimesLIVE tweeted a link to the announcement by SAB. One responder remarked: “Oooh blackmail springs to mind. What happened to their #ResponsibleTogether campaign? #savemylivelihood efforts.”

@SABreweries tweeted: “As a direct result of the alcohol ban, we have been forced to halt our capital investments. Not only will this affect our value chain, but also the GDP growth of the economy. #ResponsibleTogether #SaveMyLivelihood.”

@mikeratcliffe tweeted a link to a Biznews article explaining that the alcohol industry had called for a review of the alcohol ban because pressure on hospitals had eased. SAMRC President Dr Glenda Gray and Prof Charles Parry, Director of Alcohol, Tobacco and other Drugs Research Unit of the SAMRC, advised in a recent interview that the excessive pressure anticipated from the Covid-19 pandemic had not materialised, and that lifting the ban should be considered.  @mikeratcliffe’s post was retweeted close to 200 times and received more than 400 likes. Responding to @mikeratcliffe, @nigel0401commented: “people have lost jobs. #savejobs.”

@SayEntrepreneur tweeted: “Consol Glass has lost over R1.75 bn sales and production due alcohol ban. South Africa’s glass packaging industry’s sales are made up of 85% alcoholic beverages. Consol may shutdown 8 of 14 furnaces resulting in over 300 job losses.”

As debate over the SAB disinvestment continued, @BonoloMaphutha tweeted a sobering message about the shortage of PPE for doctors, attracting 1,700 retweets and nearly 3,000 likes by this morning: “I’m here to remind you guys that doctors in South Africa are dying due to lack of PPEs but people received tenders worth millions to supply PPEs. With the government we have? I don’t see us recovering from this pandemic anytime soon.”

@Extrovrt_ responded: “Can we all just agree that we aren’t voting for ANC in the upcoming elections.” DM