A crisis such as the Covid-19 pandemic creates a perfect opportunity for those who wish to cause confusion, chaos, and public harm. Mis and disinformation enables them to do just that. Another week, more complaints from the fruitcakes, the nasty and the evil. Like the virus, we may win big battles, but the war is far from over.

The spreading of false information to intentionally cause public harm has always been part of information sharing. What is new is that the internet, social media and other digital platforms have made sharing this information that much faster, more accessible, and able to reach a massive audience in the blink of an eye. This is one of the reasons why disinformation during a time of crisis is particularly dangerous, not only to our individual (and collective) health but to the very core of what we stand for as a democracy. Using the Real411 platform we have analysed disinformation trends which have largely focused on Covid19. Disinformation is defined as “false, inaccurate or misleading information designed, presented and promoted online to intentionally cause public harm”.

Real411 has been up and running for nearly four months and, since the initial launch, we have received 606 complaints. Of these complaints, 585 have been reviewed, assessed, and appropriate action recommended and taken. Most of the complaints have been assessed as instances of disinformation related to Covid-19, the pandemic, health regulations, scams, conspiracy theories, and calls to encourage non-compliance with government regulations. The weekly commentaries that we write aim to create awareness and push counternarratives to the content found to be disinformation. We want to highlight some of the more concerning or interesting complaints, but also point to some of the bizarre content that seems to make its way onto our timelines and social media feeds.

The selected complaints below highlight some of the more dangerous, bizarre, and outright silly instances of disinformation found on social media platforms during the reporting period (20 – 26 July 2020).

Complaint #649 is a common occurrence of mis/disinformation. Legitimate content taken from a different time, and presented as current, but with inaccurate context. The complaint was of a video circulating on Twitter, claiming that the Covid-19 virus transmits from monkeys to humans. The video in question dates back to February 2019. The video was shared by a known parody account, but one cannot be certain whether the intention was parody or not, thus, given the heightened anxiety ridden environment we find ourselves in during a global crisis, there should be far more responsibility displayed when sharing content such as this.

Back to the conspiracies, another attempt at pushing for the fruitcake notion that Covid-19 is a hoax and part of a 50-year plan to achieve global governance. What’s interesting to note in these kinds of complaints is that often the conspiracies are aimed at people who in many other contexts, while powerful, are agents of positive change. In particular, Anthony Fauci – the US Public Health official who consistently holds to the value and power of science in seeking to combat Covid-19.

Then, Bill Gates, while we might hold strong views on his former company Microsoft and hate the system when it crashes for no reasons, the Gates Foundation has been transformative in supporting world leading HIV research, much of it in South Africa. Then of course we get George Soros, hated because his foundations have been supporting and deepening democracy. In South Africa, while the foundation carries his name, all decisions to allocate funds are made by local experts and team.  (Disclaimer, MMA is funded by Open Society Foundation.)

What is common to the three is that they are challenging the status quo and perhaps this makes them especially juicy targets. On the surface though, the suggestion that they are in fact behind a secret plot to control us all is so jarring it hardly seems worth consideration. The problem is that those who seek to disinform will put out variations of disinformation about them, so that swirling around them at any one time is the notion that not only are they not doing good work, they are in fact seeking to control us or are also secretly Nazis, and/ or driven by evil Jews (yep stupid to think they may be both Nazis and driven by evil Jews). Why would people seek to do this? First, to create doubt, but also to create noise and divert attention from the key things they are actually saying and doing. Thus, instead of people debating for example a point by Dr Fauci, people are more likely arguing on social media over whether Dr Fauci is part of an evil plan to control the world or not. The science goes out the window and people are left with false equivalencies and irrelevant debates. Despite no evidence to support any of the negative claims about the people mentioned, the content continues to have traction on social media. As highlighted previously, spreading conspiracy theories seems to be more common that one would think, especially during a pandemic.

Complaint #661 seems to be a classic attempt at a scam, playing on existing potential confusion around adequate protection in the form of masks. The blog claims that while everyone must wear surgical masks, many current surgical masks are “fake”. Simply false information designed to cause further confusion and fear. Just about everything about the content is bad. From the poorly conceived idea to the actual mask they are seeking to sell, which has a one-way valve, so air for the user is filtered as she breathes in but the air breathed out goes out unfiltered. One of the key elements of wearing masks in this period is to help prevent the virus being spread by the person breathing out. So not only does the advert seek to mislead about cloth masks, it is also trying to sell a product that is genuinely counterproductive and would probably assist in the spread of Covid-19.

This complaint takes fruitcake ideas to a whole new level. This particular post claims that the real reason for lockdown is a cover for paedophilia and the human sacrificing of children, happening within the highest levels of government. While there is no doubt that child abuse is a very, very serious issue, and needs to be tackled, suggesting that Covid-19 is driven by government to hide it is just extraordinary. Unlike some of the other fruitcake ideas, the logical leap here between how a government would use the epidemic to hide paedophilia is wider than the gap between what Eskom charges for power and what it delivers. This type of disinformation is a classic case of encouraging non-compliance, instilling fear and confusion.

Like some of the other powerful people noted above, Nelson Mandela is also subjected to a number of outlandish claims, including that he worked for the CIA, the apartheid government and/ or Johann Rupert. In this complaint the content suggests that Nelson Mandela, South Africa’s first democratically elected president, was a Freemason, and this was relevant because it explained how he acted at the instruction of an elite group of evil whites. Interestingly, the symbols from the Order of St John have been used to suggest Mandela was a Freemason. It seems that a purpose of the post was to fuel racial tension.

The examples have been selected from the Real411 system. 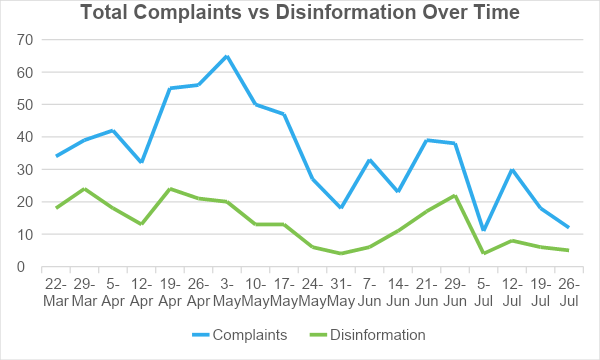 In our weekly analysis, we also take a look at where the complaints originate from, in other words, where instances of alleged disinformation have been found, and complaints submitted. 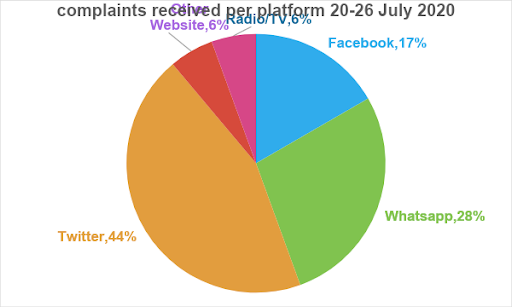 Twitter, Facebook and WhatsApp remain the top three platforms where content is found and submitted to Real411. This is to be expected though. What is interesting is to observe which platform seems to have more complaints about content and how that changes on a weekly basis. Last week, WhatsApp had the most complaints; this week, however, Twitter leads with eight complaints, followed by WhatsApp with five, and Facebook with three. DM