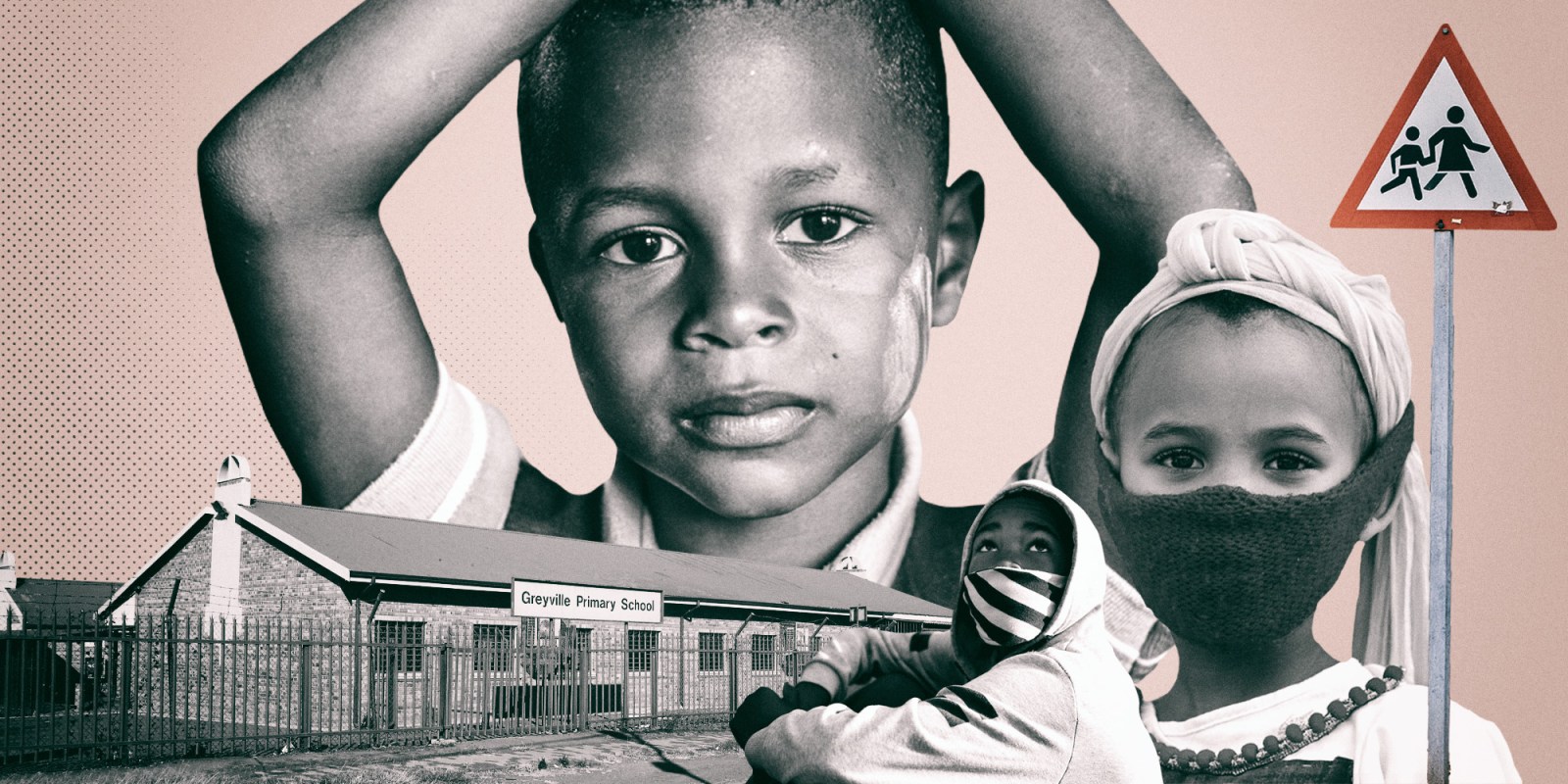 With public schools closed, parents and pupils are left to fend for themselves and while many are trying to make sure the academic year is not wasted, activists say structural failures of the public schooling system cannot be ignored.

Cinga Mgandela, 13, lives in Gugulethu and attends Kulani Secondary School in Langa. A lean and tall teenager who wants to be a doctor when she grows up, she’s gutted that she’s missed most of her first year of high school. The last time she heard the bell ring was 18 March.

“I’m not okay, I’ve been missing a lot of schoolwork,” she told Daily Maverick over the phone.

During the day she enjoys reading fairy tales and books that her mother buys to help her catch up on missed work. Her room is painted pink, with schoolwork stuck to the walls. Her favourite subjects are mathematics, English and natural Science but it’s been difficult to get through new content because she was not allowed to bring her textbooks home before lockdown.

With learning predominantly being her own responsibility, Cinga’s taken to watching educational TV channels and asking her older sister for help. But she misses her friends and her teachers. “The teachers encourage us a lot. They encourage us to focus on our schoolwork and stop being with boys. But I’m not interested in boys,” she says with a laugh. “My schoolwork comes first.”

According to Statistics South Africa, more than 23,000 public schools cater for more than 12 million pupils and the sector is marred by overcrowded classrooms, teacher absenteeism, high drop-out rates, poor sanitation and vandalism. The threat of Covid-19 is yet another snag and the announcement to close public schools for a further four weeks while allowing private schools to remain open by President Cyril Ramaphosa on 23 July 2020 has stakeholders concerned that the inequality gap will be further widened.

“The ways in which government has let black children down is astounding,” says Athambile Masola, a member of the bua-lit collective and a lecturer at the University of Pretoria. She says the cards are stacked against children like Cinga who dream big but face a continuously failing education system.

“The situation is worse than we think and it’s no surprise that we’re not able to get out of the inequality of education because it was designed that way. Government thinks it’s okay to close black children’s schools, but private schools are going to keep going. That is by design. It’s about Covid-19 but it’s also about how the system was designed to fail and here’s the failure,” says Masola.

Basic education department spokesperson Elijah Mhlanga says pupils at public schools can access a “variety of platforms” including radio, TV and zero-rated sites for “good curriculum content that can be accessed, whether one has data or not”. But there has been an outcry about how pupils at public institutions are expected to consistently access online learning materials.

“The [inequality] gap has got so much wider in the past four months because some were able to migrate [online], others were not,” says Masola.

According to a General Household Survey released by Statistics South Africa in 2018 which looked at internet and device penetration rates, 64% of South African households have at least one member who owns a device that can connect to the internet. Gauteng has the highest internet penetration rate, with 74% of its residents accessing the internet from their homes, place of work, study, or internet cafes. Limpopo has the lowest rate in the country with only 46% having access to the internet. The study also found that more pupils are attending no-fee schools and a quarter of those who dropped out of school said they did so due to financial reasons, poor academic performance and “a feeling that education is useless”.

Western Cape Minister of Education Debbie Schäfer released a statement on 24 July 2020 expressing “deep disappointment” with the decision to close schools, saying that an additional four weeks of pupils at home will cause “immeasurable damage to our children and our economy”.

Parents across the country have been collecting schoolwork on behalf of their children during lockdown including Karen Hendricks, an unemployed, single mother. Her 13-year-old son is in Grade 7, a “crucial year” before entering high school.

“The expectation for them to do their schoolwork as normal is so high but these are not normal times,” says Hendricks. “A lot of responsibility is placed on parents and there’s no relationship or communication between us and the educators. Everyone is in a difficult position right now and a lot of teachers don’t understand the social challenges of learners.”

Western Cape Education Department Spokesperson, Kerry Mauchline, says her department has provided thousands of free digital learning resources to pupils through ePortal, including resources for teachers and Matric pupils. According to Mauchline user numbers on the site have increased dramatically since the start of lockdown and her department has been releasing weekly lesson plans on what to cover to “guide parents and learners through the curriculum”.

But for Hendricks and her son, online schoolwork comes with its own challenges. They are two of 1,200 residents at Cissie Gool House in Woodstock, Cape Town, a hospital that has been occupied by land activist group Reclaim the City since March 2017. The occupiers are predominantly evictees and homeless people and roughly 350 children are occupants. Social distancing at the hospital is difficult with families sharing small rooms, ablution facilities and cooking areas. The ability of parents to earn an income has also been hampered by restriction of movement. Many parents do not have laptops or smartphones which would make it possible for their children to access online learning resources and there is no dedicated space for pupils to do their work.

“We don’t have access to online facilities and we’re not able to help them [with schoolwork]. I’m angry because no one was prepared for this,” says Hendricks. “How do you assist your child with homework if you don’t have the knowledge?”

Mauchline acknowledges that even in cases where the technology is available, it’s not always possible for pupils from low-income communities to access quiet spaces to do schoolwork.

“In-class teaching is very important for them especially, and also for the social and developmental aspects of learning by attending school. This is why it is so important to have learners back in class instead of closing schools against expert evidence which says that schools should be open,” says Mauchline.

For Masola, whether a school is physically open or not is not the point. It’s digital migration that is hampering pupil engagement. “When we say private schools are surviving it’s because a middle-class child has a room, or is sharing a room with a sibling, they have a laptop or a smartphone that is theirs,” she says.

“The lives of middle-class children are structured in such a way that they can do the work of independent learning. But for a working-class child you’re saying they must work in a home where everyone is living on top of each other, or where there’s no food at home, so the idea of sitting at a desk by yourself and having the time to do independent learning is probably not there,” she says.

The government does not believe in the education of the black child and there’s a fundamental belief that black children don’t matter, says Masola, who argues that the history of the Bantu education system continues to wreak havoc on South African children. She says there’s a “level of vindication” for education activists who have been warning the education department about the failures of the public schooling system for decades. “Somehow there is no urgency about fixing an unequal system,” says Masola.

“There are kids who will never go back to school, not because of lockdown per se but because there’s never been an incentive for them to go to school in the first place,” says Masola.

Education department spokesperson Mhlanga acknowledges that Covid-19 disruptions are going to have a major impact on pupils but says that 2020 cannot and should not be compared to other years when determining education performance and dropout rates.

“There has been trauma, fear, panic and general instability in the sector. For that reason we can’t compare [2020] with any previous year due to the unique circumstances the world finds itself in,” says Mhlanga.

But as an activist, Masola’s greatest concern is that even the “brightest kids” in the system will be left behind. “I don’t know if they will be able to get themselves out of this because we know a lot of children were teaching themselves even when they were at school because teachers were not rocking up. So, I don’t know how even the brightest buttons are functioning.” DM