DA elective congress: A key moment, and not just for the party 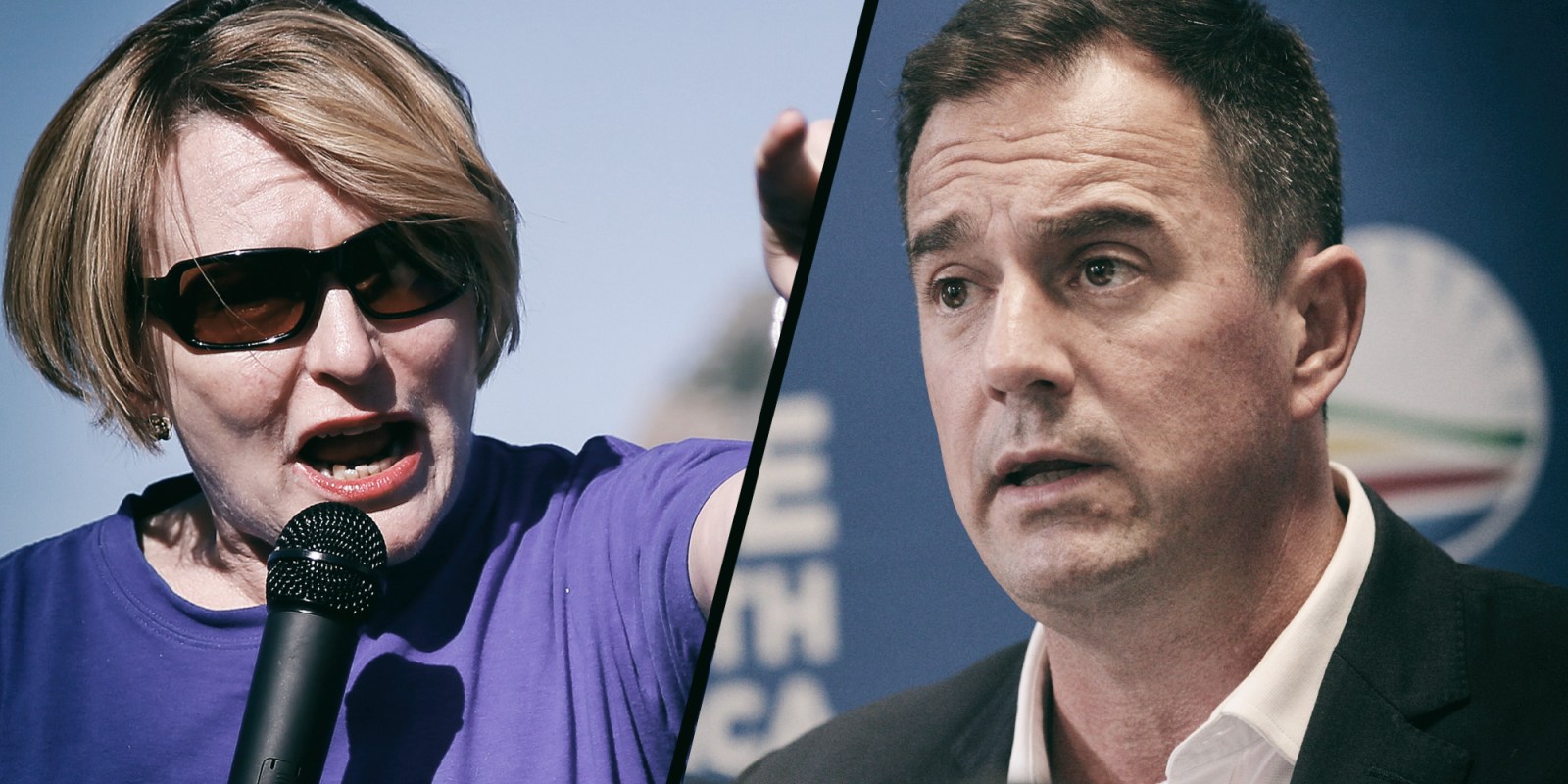 Twelve weeks of campaigning. Then a hybrid virtual elective congress. It’s a period that will determine what happens to the DA — but will also have an impact on South Africa’s body politic.

For the political party that measures its success by electoral performance, the 2021 local government elections will be key. And to stand the best possible chance to thump the ANC — and be that alternative government — is to reorientate the DA.

It’s a point rivals for leadership — KwaZulu-Natal MPL Mbali Ntuli and interim leader John Steenhuisen — agree on. What’s to be done is where the difference comes in.

Ntuli is looking to change the internal culture to ensure everyone is heard and seen. Steenhuisen is more driven by efficiency, in leadership and party organisation.

Both agree, again, performance in the 2021 local government elections is key for the DA, even if they do not share the same approach.

As Ntuli put it: “Nine years of (President Jacob) Zuma, and we still do not scrape beyond the low 20 percentages means we have to change”. Steenhuisen says the DA needs to emerge as a significant player that will ensure the ANC is put on the back foot.

It’s not a two-way leadership race, but outgoing Gauteng leader John Moodey, the third leadership contestant, seems to be in the background. According to some circles in the DA, he is seen as splitting the vote that would go to Ntuli. But Ntuli has KwaZulu-Natal pretty much sewn up, and the younger DA public reps and members.

Nothing in politics is ever quite straightforward.

That face-off will be between former DA leader Helen Zille, who cut short a stint at the Institute of Race Relations (IRR) at the 11th hour to contest the post in October 2019, and Gauteng MPL Mike Moriarty.

Zille is widely tipped as the front-runner. But that does not mean Moriarty, a veteran DA public representative and party’s number cruncher at election time, isn’t putting up a credible contest.

It wasn’t about the DA being on a comfortable ideological platform, said Moriarty, but asking the difficult questions. “It has to be about prioritising South Africa, the broader base…”

While Zille counts on support arising from her governance reputation built as mayor of Cape Town from March 2006 to the maximum two stints as Western Cape premier, her campaign for Federal Council chairperson unfolds under the shadow of disciplinary proceedings.

Daily Maverick has confirmed Zille will be facing charges under the DA digital media policies over her most recent Twitter controversy, although no date has yet been set.

The tweet — “There are more racist laws today than there were under apartheid” is central — having sparked renewed pushback against Zille, who is perceived as the face for classic, true-blue, and predominantly white, liberals.

When asked for official comment by the person in charge of matters disciplinary, Deputy Federal Council Chairperson Thomas Walters declined.

“No comment… I’m not having any conversation with the media regarding an internal process.”

It’s an interesting twist as the DA traditionally has touted its openness and approachability, but perhaps an indication of the new direction of that office since October 2019.

Getting to the elective congress from 31 October to 1 November 2020 — it was postponed from May due to the Covid-19 lockdown — is crucial. Organisationally, but also policy-wise.

The two-day policy conference from 5 September may yet have an impact on the elective congress, and the DA’s future direction.

Race has been the Achilles Heel of the DA for years. Going back to when Lindiwe Mazibuko was DA parliamentary leader and at the first-ever policy gathering in November 2013 spearheaded the successful push for a race to be recognised as a proxy and legitimate measure for disadvantage.

The draft vision and principle policy document put together by DA policy honcho Gwen Ngwenya — she’s more of a libertarian, free-market fundamentalist and a one time IRR COO — again discounts race as a signifier of poverty, inequality and joblessness.

In short, that policy draft says the DA opposes quotas as “each individual is unique and not a racial or gender envoy”, and is committed to nonracialism “not just to reject racialism and racism, but to fight for the deconstruction of race, and the reconstruction of a non-racial future” with policies to “tackle inequality of opportunity” through interventions in education.

Just not interventions that recognise race as the overwhelming characteristic of the deep poverty and inequality in South Africa.

Somewhat ironically, none of the three leadership contestants takes this view. Certainly not Ntuli who is clear in her stand that “people of colour are still living in poverty. I have no difficulty to say race, but also to propose solutions”. And neither Steenhuisen, who said, “people are going to be less concerned about the colour of the cat, and more concerned about the cat catching the mice”.

Daily Maverick understands that vision and principle draft policy may well be amended. And while other DA policy documents are not unimportant, it will be the views on race as part of its values and principles that will play a not insignificant role in how the DA will be perceived by South Africa’s voters.

In many ways, the upcoming elective congress will resolve the unfinished business of the past nine months.

In the October 2019 contest for that position, Zille roundly defeated ex-Nelson Mandela Bay mayor Athol Trollip — leading about three days later to the resignation of Trollip and then party leader Mmusi Maimane. Amid rapidly moving developments, Steenhuisen, then DA chief whip, became temporary interim leader within a couple of days, before the Federal Council in mid-November 2017 elected him interim leader until the elective congress.

The date for congress from 31 October was confirmed by the Federal Council over the weekend of 25 July. And by Wednesday, the campaigns for party office were in full swing.

Ntuli and Steenhuisen reactivated their websites, posted videos — as did Moriarty — and started campaigning, as the DA does for its party posts. Moodey also rebooted his campaign, centred on the theme of “workable alternative”, with a newsletter scheduled for this week.

Ntuli is campaigning around the motto “Kind. Strong. Fair”, with a clear appeal to make the DA home for everyone. Steenhuisen campaigns on “winning ways” and “decisive leadership”. And Moriarty is urging “for a better future, commit to the vision”.

Campaign team meetings are planned all round. That much must happen virtually is uncharted territory for everyone.

“We will have to see how it goes,” said Moodey, confirming he would not stand again as Gauteng DA leader when the provincial congress is held in late September: “It’s time to move on… You can’t stay in the same place…”

Last weekend’s 82% Federal Council vote in favour of a hybrid virtual congress defeated Ntuli’s push to delay the congress until it could physically take place in the interest of full debate and delegates’ interaction.

Ntuli said a letter is being drafted for Federal Chairperson Ivan Meyer — he’s responsible for congress — to raise issues regarding the secret voting system in a hybrid system, how to access delegates, and other issues.

“At this point, we don’t feel these concerns are addressed.”

Some issues are settled. According to Meyer, 2,166 delegates will attend the two-day elective congress, and nominations will be open from 1 September to 10 October.

Once that nomination window closes, who is contesting what position will be clear.

Another factor is the Freedom Front Plus, and whether it will translate its May 2019 national electoral gains — up from four MPs to 10 — to local government where it is understood to be targeting DA voters, particularly the more conservative elements.

The outcome of the DA’s policy conference and elective congress will determine how these broader opposition dynamics unfold. And the impact could well reverberate across the South African body politic given the governing ANC’s cancellation of its 2020 conferences, including the traditional mid-term assessment, the National General Council.

If the DA gets it right, it could shift the political landscape in the 2021 local government elections. As in 2016, when the ANC lost Tshwane and Nelson Mandela Bay and needed coalitions to maintain control in Ekurhuleni and elsewhere.

If the DA gets it wrong, it will pay the price. DM