DA leadership: The party under Steenhuisen must now face up to race, redress and electoral mishaps 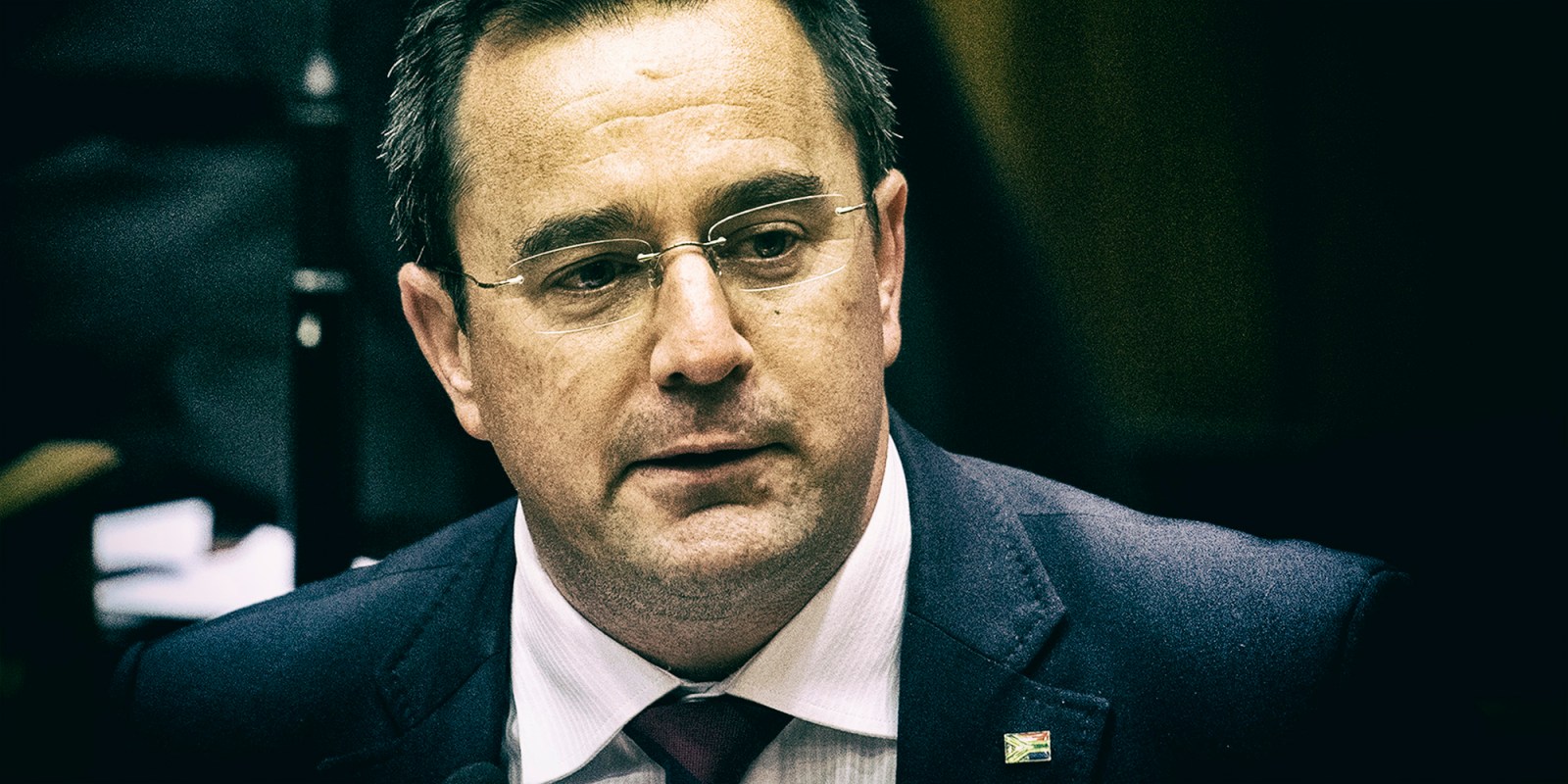 DA parliamentary leader John Steenhuisen’s election as DA interim leader is raising questions about black leadership, race and redress. And while Steenhuisen didn’t mince his words — ‘Race matters’ — only time will tell if he’s got backing among the DA’s liberal factions.

Newly elected DA interim leader John Steenhuisen, who’s made no bones about the interim leader’s post being a pit stop before contesting the leadership position in early 2020, has five months to persuade the DA not only how to deal with race and redress, but also how to reposition itself away from “banging [on] about how bad things are under the ANC” and in establishing the party in communities to regain trust and electoral support.

His vision? “No more blue jelly in the middle”.

It’s ambitious. But Steenhuisen, it has been reliably learnt, received 75% of the vote at Sunday’s DA Federal Council, its highest decision-making structure between national congresses. And that, at least for now, has smoothed the road to the April 2020 policy conference, followed by the national elective DA congress in May 2020.

“We now go back to the branches. The journey continues,” read Gana’s congratulatory tweet in what counts as good form in the DA.

Instead, Western Cape agriculture MEC Ivan Meyer, a one-time provincial DA leader in Zille’s time as national leader, got the nod to replace Athol Trollip, who resigned with Mmusi Maimane on 23 October 2019.

The two leaders’ resignations, alongside that of Johannesburg Mayor Herman Mashaba effective from the end of November 2019, rocked the DA. The resignations are intricately linked to the comeback of Helen Zille, who on 20 October was elected chairperson of the Federal Council. Given that in that role, Zille is also chairperson of the smaller Federal Executive Committee (FedEx) in charge of the DA’s day-to-day running, the former DA leader and two-term Western Cape premier has an extremely powerful role.

Zille and Steenhuisen are set to clash. They are not quite on the same page, ideologically. Throughout Sunday’s media conference Zille sat stone-faced and silent.

And it’s at that FedEx meeting in a few days that Steenhuisen will face a first potential stumbling block — the appointment of a policy head. On Sunday it was made clear that this is a FedEx decision.

It’s a crucial determination ahead of what is an unusual move in the DA, a dedicated policy conference. In November 2013, such a policy conference held at the instigation of then parliamentary leader Lindiwe Mazibuko led to the decision that the DA believed race is a proxy for disadvantage.

It was a significant breakthrough, although Zille, then party leader, seemed to feel backed into a corner given that the decision came shortly after she had read Mazibuko the riot act over backing BEE amendment legislation. At that November 2013 media briefing, Zille maintained that while race was a proxy for disadvantage, it did not mean sudden approval for race-based quotas.

According to City Press, one contender for policy boss is Gwen Ngwenya, the former policy honcho who left in early 2019 after a fall-out with then-leader Maimane. She did not take up her seat as MP after the May 2019 elections. The liberalism supported by Ngwenya and many others in and outside the DA is opposed to race in any shape, form or version as her July 2019 political opinion piece “How race poisoned the DA” illustrates.

“Race turns everything rancid,” writes Ngwenya regarding the DA’s turmoil. “It destroys merit and elevates mediocrity, it shuns principle and critical thinking and replaces it with a racial logic which defines how arguments are made and won, but most fatally it prostrates the individual before a false and hegemonic myth, that race is real.”

The DA unashamedly proclaims itself liberal with a focus on individuals, merit and potential rags-to-riches tales, but this means dealing with race, particularly for those of the libertarian and classical liberal persuasions, is an ideological pickle.

And so it’s set to raise hackles in the party Steenhuisen now leads, especially when he talked, as he did at a televised media briefing within an hour of having been elected, of the need for redress and that redress can not be delinked from race:

“It is clear to the DA the legacy of apartheid must be corrected through targeted redress. Apartheid was a brutal and unjust system that continues to haunt the lives of millions of South Africans two-and-a-half decades after it ended.”

But while many different views prevail in the DA on race, there is one unifying point: opposition to employment equity and black economic empowerment on the agreement these have failed to address inequality and poverty over the past 25 years while entrenching the wealth of a few.

“I never once said race doesn’t matter. Of course, it matters because 99.9% of poor South Africans are black,” said Steenhuisen, but adding later that redress did not have to resort to “crude race classification” as redress policies should be directed at the poorest in South African society, who were black South Africans.

It’s the line already taken at Thursday’s DA parliamentary caucus. Daily Maverick understands Steenhuisen told DA parliamentarians that the party had to be absolutely committed to redressing the wrongs of the past and that race did matter because poverty and inequality today were still very much along racial lines.

None of this is necessarily opposed to, for example, Gana’s interim leader campaign of “a new direction for economic, social and environmental justice”. But it would all depend on what kind of liberalism ultimately prevails.

The DA broad church of liberalism includes the libertarian kind that values the free market above all; the classic liberalism of market economy, private property, rule of law and free trade, and also the social liberalism that allows state interventions to, for example, regulate the economy and to act on social issues. And there are nuances in between.

For many, the 2013 DA policy decision that race is proxy for disadvantage — an evolution of the 2005 Federal Council nod to diversity — rankles. And many in the DA also argue that the black middle class has grown to more than five million. It could not be regarded as disadvantaged, and neither could black professionals.

One line of thinking in the opposition party is that disadvantage needs to be measured by anything but race — from unemployment, income levels, housing conditions and health to educational qualifications. The thinking in this argument is such measuring of disadvantage would lead to policies to benefit the millions of black South Africans, who 25 years into democracy remain most disadvantaged by any measure.

But this is exactly the tone-deafness and blind spot to the lived reality of South Africa’s racialised inequality the DA has been sharply and repeatedly criticised for.

It is the DA’s Achilles Heel. And it is this that leads to proposals such as Steenhuisen’s policies of redress to lift people out of poverty and so-called “opportunity policies” to deliver on better education and a faster-growing economy.

The months to the April 2020 policy conference will be tense with factional jockeying and politicking. The policy meeting is one of those occasions where the DA will make a choice on its future – and how it situates race in its policies, politics and activism will be crucial.

But it’s also about repositioning the DA from its electoral losing streak ahead of the 2021 local government elections.

Right now it’s not looking that good. Much has been made of the drop in support in the May 2019 general election to 20.7% from 22.2% in 2014. But recent by-elections have not delivered much happiness.

In the 13 November 2019 by-election, the DA lost the Vredendal ward it had clinched from the ANC in the 2016 elections and even though it retained the other two wards in its strongholds of Tafelsig and Westbank on the Cape Flats, support was down by 20% and 17% respectively. These outcomes are in line with the trend in the months ahead of the May 2019 elections.

Steenhuisen has his work cut out as an interim leader at a time the DA, particularly in its policy-making around race and redress, will make crucial decisions on its future. And regarding his career future, it’s a long road to the DA national elective congress in May 2020. DM