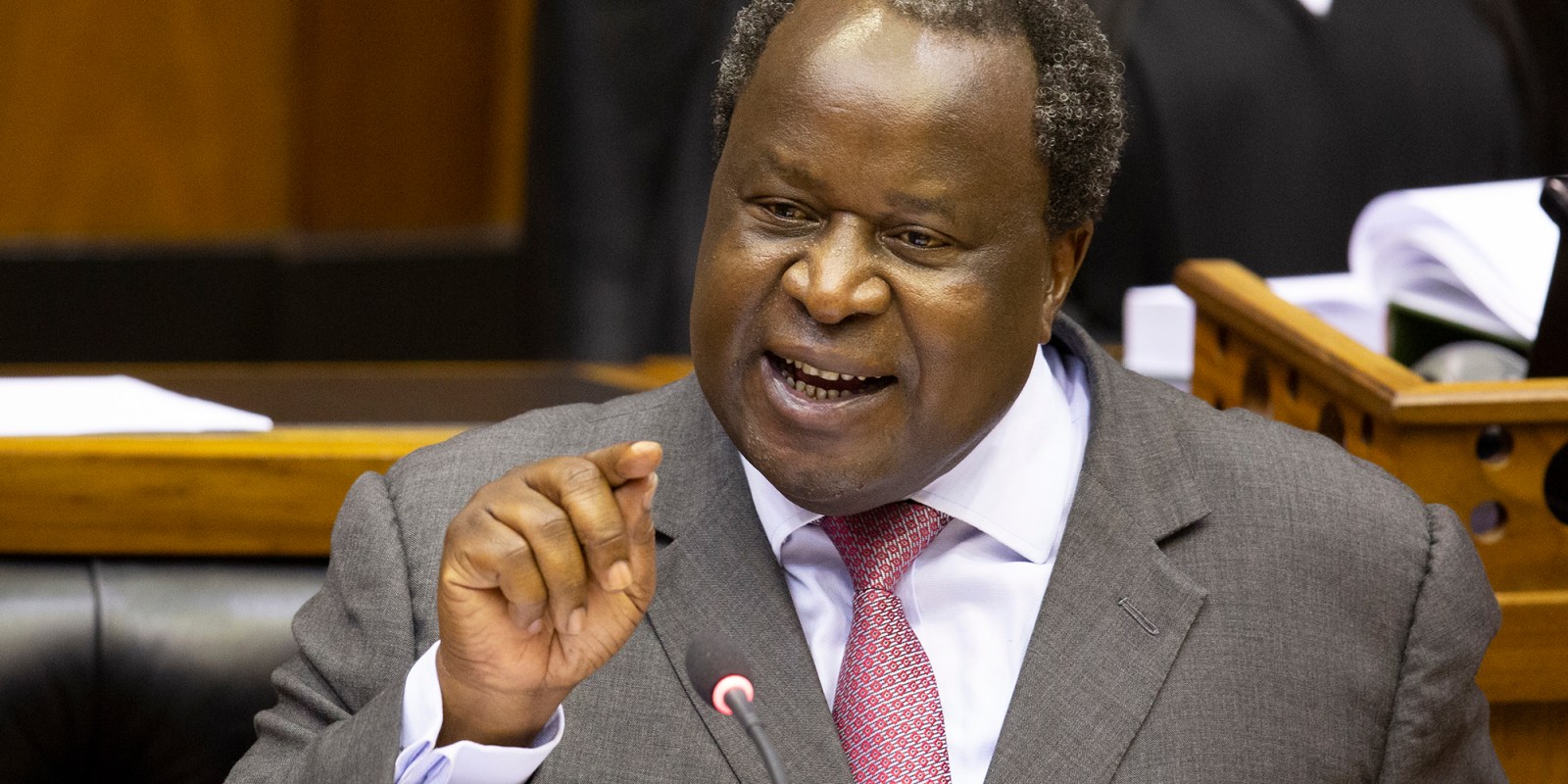 That the Covid-19 emergency Budget, officially the Adjustment Appropriation Budget, would be passed by the National Assembly was a given. In the previous week of Budget votes, the ANC gave its numerical majority to support all. Wednesday’s first reading vote was 226 in favour, 129 against. All individual votes were carried on the back of ANC numbers in the House.

But Wednesday’s Covid-19 emergency Budget vote also came in the wake of the start of Special Investigating Unit (SIU) investigations into various dodgy Covid-19 contracts, after claims of nepotism, corruption and price gouging. Not only in Gauteng, which is at the heart of the controversy, but also the Eastern Cape, KwaZulu-Natal and elsewhere.

“The feeding frenzy that is going on in the country, that every contract and every tender issued is equal to corruption is incorrect… It is very important to put things in perspective,” said Mboweni in closing the debate.

Referring to “possible acts of corruption in some of the contracts”, Mboweni said he had already held talks with National Treasury Director-General Dondo Mogajane to tighten the processes.

Transversal contracts are the centrally facilitated procurement of goods that are used by more than one department, or entity. Health, for example, already has several — from anti-retroviral treatment medication to condoms and surgical sundries. Others include school textbooks and stationery, courier services and fuel.

Mboweni named no names when he said, “That a R125-million tender is a gift to someone is incorrect…”, but it’s a clear reference to the controversial R125-million Covid-19 tender for amaBhaca traditional leader Thandisizwe Diko, husband of Presidency spokesperson Khusela Diko, who has taken leave. Daily Maverick confirmed R47-million in tenders that, however, were ultimately not signed into binding contracts.

How Covid-19 emergency procurement turned into a cadres’ feast

That did not stop opposition MPs on Wednesday from using this — during the question time on Budget Vote 1, the Presidency.

DA interim leader John Steenhuisen described President Cyril Ramaphosa as a man out of touch with reality, as “his government is holding the boot to the neck of South Africa’s economy and education system”, amid mounting evidence of “ANC covidpreneurs” also right under his nose.

It was time for action, not another presidential word salad, according to Steenhuisen.

“Minister Mboweni said that a tender is predominantly an ‘ethical’ contract and not a blank cheque that corrupt officials can use to cheat and steal. And yet that is exactly what is happening…”

Similarly, the EFF and African Christian Democratic Party (ACDP) raised the allegations around the amaBhaca tender, and Covid-19 corruption generally.

Deputy Minister in the Presidency Thembi Siweya kept her response to highlight the 23 July presidential address to the nation when he announced the SIU probes, adding later:

“It is not correct the president is not taking an active stance on corruption.”

Aside from the African Development Bank’s R5-billion loan, most attention has fallen on the $4.3-billion, or around R70-billion, loan from the International Monetary Fund (IMF).

Given that Ramaphosa has adopted an anti-corruption stance for his administration from word go, the corruption claims attached to Covid-19 personal protective equipment and other gear are deeply damaging.

The developing Covid-19 corruption saga — the auditor-general will also look at how Covid-19 monies are being spent — is particularly painful in many circles because of where the R130-billion reallocated from across government towards Covid-19 measures comes from.

The emergency Covid-19 Budget moves billions of rands from what is officially regarded as underperforming programmes. Given that is the standard, serious questions must be asked about why hundreds of millions are taken from what seem to be key programmes — HIV/Aids testing, public transport and land restitution.

From various Budget documentation, it emerges R611-million has been reprioritised away from food security. Land redistribution and tenure reform lost R544-million, land restitution R403-million. Just over R600-million is redirected from the HIV/Aids testing programme. Basic education loses R2.2-billion from its infrastructure funds meant to address schools backlogs. Some R1.9-billion was moved from the public transport network grant, even as public transport remains a priority.

That these funds have been moved from the original intended purpose to Covid-19 measures indicates uncertainty on whether the funds would have been spent. And this, again, highlights the weak public administration.

And yet the Special Adjustment Appropriation Budget measures outlined in the Supplementary Budget Review are key to South Africa securing the tens of billions of rands needed to plug the large and growing hole in the public purse.

The booze and alcohol bans cost about R1.5-billion in excise taxes a month, contributing to the anticipated R304.1-billion tax collection shortfall also due to retrenchments, salary cuts and furloughs. Instead of a very modest 0.8% growth predicted in February’s Budget, the 24 June Special Appropriation Budget is based on a 7.2% economic contraction.

Aside from the African Development Bank’s R5-billion loan, most attention has fallen on the $4.3-billion, or around R70-billion, loan from the International Monetary Fund (IMF).

But it’s one thing to outline an initiative on paper, quite another to implement it — especially in a contested, factional, governing ANC where ideological musings are not infrequently prioritised.

Despite the polite language, the IMF report seems not quite convinced South Africa has the gumption to do what’s needed

“Should the authorities not achieve consensus to implement the envisaged reform agenda to reverse the economic stagnation of the last decade, growth and debt would follow the path in the passive scenario presented in the authorities’ Supplementary Budget Review, posing serious threats to debt sustainability, and generating destabilising effects such as inflation or financial repression.”

On the Covid-19 measures, the IMF references growing unemployment and social restiveness and unrest, to put it rather bluntly

“Fiscal tightening and rising unemployment, if not mitigated through timely and well-targeted Covid-19 relief first, and policies that promote investment and employment later, would jeopardise growth revival and increase poverty and inequality”.

The IMF recognises the supplementary or Covid-19 emergency Budget as an interim measure — National Treasury calls it a bridge — to October’s Medium-Term Budget Policy Statement (MTBPS). That also seems to be the outer timeline for action for the IMF agenda.

Intellidex analyst Peter Attard Montalto, in Tuesday’s brief, said if the so-called active scenario reforms were not implemented, South Africa would in the next two to three years be back at the IMF for a full-blown conditionality programme.

South Africa’s choice is a fundamental one: implement the real reforms to address the structural distortions that maintain poverty, inequality, joblessness, and due to the Covid-19 lockdown, increasing hunger, or continue ideological debating.

In the wake of confirmation of South Africa’s IMF loan, it seemed that ideological debating dominated. Mboweni tried to address this in closing Wednesday’s special Adjustment Appropriation debate.

“This misunderstanding of the IMF loan as if the biggest devil has arrived in town is quite incorrect. We must understand it within the context of Covid-19,” said the finance minister, adding if the IMF loan, alongside the African Development Bank loan, had not materialised, South Africa would have to make another plan to borrow the money.

It’s a now or never moment for South Africa. DM