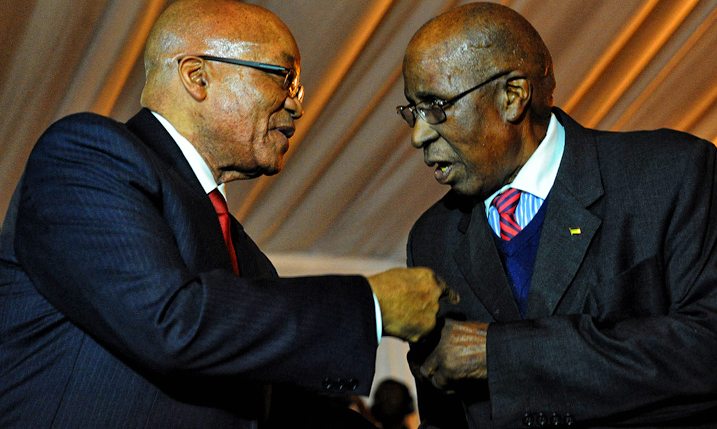 A strongly worded letter from the stalwarts and veterans of the ANC to the party urges the organisation to review and rescind a decision to have former president Jacob Zuma headline the programme of the memorial of Andrew Mlangeni.

We write with great urgency to express our consternation regarding the programme of the ANC to memorialise Isithwalandwe Comrade Andrew Mlangeni.

We have noted that Cde Jacob Zuma will headline this programme at 17.00 today (Friday) and might we be so bold as to warn of the unsuitability of choosing him to fulfil this important role. We do so mindful of Cde Zuma’s constitutionally improper conduct during his tenure as President of the ANC, as well as of the raft of very serious charges of corruption for which he is to stand trial, not to mention his alleged enabling role in state capture, which is a central concern of the State Capture Enquiry presided over by Deputy Chief Justice Raymond Zondo. These matters stand in direct contradiction to the moral and revolutionary integrity embodied by Cde Mlangeni.

Moreover, Cde Mlangeni was most forthright in his condemnation of Cde Zuma’s behaviour, going so far as to say that, despite having spent ten years with Cde Zuma on Robben Island, should he be found guilty of the offences levelled against him, Cde Zuma should be returned to that gaol to serve his sentence. These were not idle words, but a damning indictment. Consequently, we are perplexed by the very idea that Cde Zuma was selected to conduct this sombre and profound homage to the last of the Rivonia trialists and custodian of the finest values of our proud movement.

In the light of these matters, we consider it wholly inappropriate to have Cde Jacob Zuma leading the memorial of Cde Andrew Mlangeni. The irony of giving this solemn honour to someone whose behaviour was so trenchantly criticised by Bab’ Mlangeni does not escape us, nor will it escape the members and supporters of the ANC, the country as a whole and the world at large. To sully the memory of Cde Mlangeni in such a cynical manner is distasteful and unbecoming of the African National Congress.

We, therefore, respectfully but strenuously urge you to review and rescind your decision and to propose a memorial programme befitting of the prestige and memory of one of the great leaders of our liberation.

Anything short of this will not enjoy the support of the Stalwarts and Veterans of the ANC, nor, we believe, of the ANC Veterans League and the broader membership. Indeed, in the event that this request is ignored, we reserve the right to distance ourselves from the programme in favour of one that properly honours Cde Mlangeni’s great legacy.

On behalf of the Stalwarts and Veterans of the ANC DM