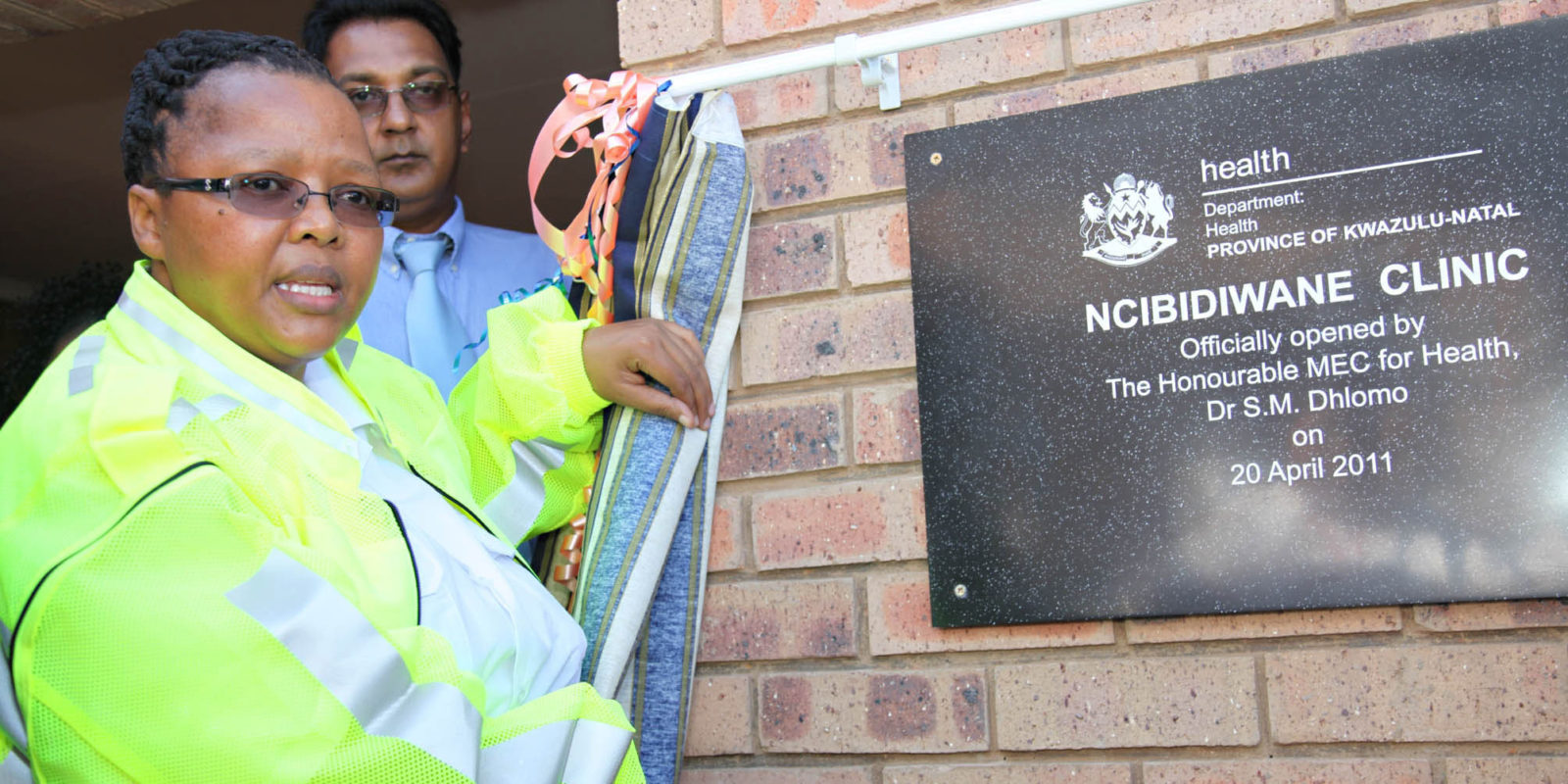 The team deployed to rectify the Eastern Cape health department’s disastrous Covid-19 response is being led by Sibongile Zungu, who has a contentious past at the KZN health department, and is one of several former employees currently under investigation by the Hawks for possible contraventions of the Public Finance Management Act.

Dr Sibongile Zungu was appointed head of the newly created project management unit (PMU) in the Eastern Cape by Premier Oscar Mabuyane last week, after she and other experts were deployed by Health Minister Zweli Mkhize to root out the reasons for the province’s pitiful management of, and response to, the coronavirus.

The formation of the PMU was among one of the recommendations made by the team which Zungu – a clinic adviser to the minister since 2019 – led.

(Zungu is not Mkhize’s special adviser on national health insurance (NHI), as has been reported.)

Nevertheless, her CV makes for impressive reading, as does her experience – she has worked abroad in countries including Malawi and Tahiti, and in some of the most remote rural areas of KZN.

But she continues to be haunted by allegations of mismanagement and corruption that follow her from a term as KZN Health head of department (HOD), which ended in 2014.

In January this year, a report was released by the public protector that made damning findings against Zungu and some of her colleagues for their roles relating to the procurement of four mobile health units leased by the department for use between 2012 and 2017 at a grossly inflated price of R61-million.

The department ended up receiving only two of the units, which were eventually recalled by the providers after sitting in an EMRS lot.

In 2013, also under Zungu’s watch, two state-of-the-art cancer radiotherapy machines worth R120-million were lying idle due to the department’s failure to pay a maintenance contract.

This was the start of the collapse of the oncology services in the province, which resulted in excessive treatment waiting lists and breakdowns at other hospitals, and the exodus of almost all provincial oncology staff due to working conditions.

The crisis led to at least 499 known deaths that could have been avoided. To date, no one in the department has been held accountable.

The department would later claim, but provided no substantial evidence, that the maintenance contract was stopped due to fraud and corruption on the side of the service provider.

Zungu also received a scathing review in the 2014 Ndaki Report, a probe headed by Professor Fikile Ndaki to investigate allegations of mismanagement, corruption and nepotism about Zungu that were made by the union Nehawu.

The union accused her of spending R310,000 on cellphone calls and data while abroad in 2013, which she said at the time was as a result of roaming network charges.

The Ndaki Report has never been made public, but it was on the strength of its findings that the then-KZN premier, Senzo Mchunu, decided he would not renew Zungu’s contract. Nehawu stated publicly at the time that it would mobilise its members and protest for a month should she be permanently reappointed.

Her month-to-month contract was terminated in March 2015 when the results of the investigation were handed to Mchunu.

She tried unsuccessfully to challenge the termination and have the Labour Court force the province to reappoint her as HOD.  She even, also unsuccessfully, took the matter to the Constitutional Court to have the cost order overturned. This judgment was handed down in January 2018.

It was Democratic Alliance (DA) KZN MPL Rishigen Viranna who laid the charges against Zungu and some of her former colleagues in January this year, on the veracity of the public protector’s report into the mobile units.  The case has since made its way to the KZN office of the Hawks for investigation, after first landing at the national office.

Zungu texted at 6.30am on Tuesday and said she was willing to talk to Daily Maverick. She later admitted she had been avoiding Daily Maverick’s calls and texts, until it struck her that she had “nothing to hide”.

“You know, my thought was [you keep on contacting me] and it’s like I am running away, so I thought, let me just write a message to you to say [I am available early] but when the clock hits eight, I am working, it is madness until 10 or 11pm. So, I thought, if you wanted to have a chat early, we could have a chat, because I don’t have anything to hide.”

She said she “welcomed” the Hawks’ investigation and hoped it would finally put paid to the allegations about the tender.

“I am fully confident that the investigation will clear me, and I will be happy when those things finally come to an end.”

As reported by Daily Maverick earlier this year, some of the public protector’s findings included that one company, Mzansi Life Care, appointed to provide one mobile health unit, was registered only on 29 May 2012, 17 days before the tender for the mobile units was advertised.

The public protector further found the R61-million paid for the four mobile units resulted in fruitless and wasteful expenditure of about R32-million because the department received only two units, as reported earlier.

The public protector ordered the provincial health MEC (currently Nomagugu Simelane-Zulu, a former ANC KZN spokesperson, and MPL) to take “appropriate disciplinary action against the officials of the department in respect of their conduct”.

She also said the HOD should, among other tasks, report to the provincial treasury and the auditor-general the particulars of the alleged financial misconduct.

Zungu told Daily Maverick that “anything” she did while heading up KZN health, “I did in the best interests of the province”.

“If you want to survive in public service, you have to do nothing until you reach pension age. Then you are [considered] clean. What I did, was to get into KZN Health and work.

“So, for me, I welcome the investigation.

“The unfortunate part is, no matter how dedicated you can be to your work, not everybody will be happy.”

She also described some of the systems she put in place at the department as “innovative”, again emphasising it was not in her nature to “sit around”.

“I had put systems in place to minimise the medico-legal cases. I am sure that if you go back to the department now, the costs will be 15 times more than they were [under my watch]; I don’t know what happened to those systems [since],” she said.

“Whilst I was a doctor I used to teach the rural students maths and physics, if something needs to be done and I am able to do it, I step up and do it.”

She said that unlike other KZN health HODs before her, who were “forced out”, she had completed her term.

She also said allegations of racking up high legal bills during her tenure had to do with “consequence management”, which unions did not agree with.

“The cases would go through and their members would be charged and dismissed or suspended, so the challenge was if you want department staff to be witnesses and all of that, they get intimidated.

“And in most instances, the department loses cases because the witness did not come. The witness doesn’t come because he or she is afraid to be singled out as being responsible for the dismissal or suspension or negative sanction [of a colleague]. So the case then folds and the person who was implicated was cleared. And it would then have to be reinstated, and things like that.”

According to the Eastern Cape government, in her new position, Zungu will “work closely with the tracking, tracing and testing teams, hospital support teams and directly with regional coordinators to ensure that the tracking, testing, isolation and quarantine interventions are strengthened”.

She said the high legal costs and cases also had to be balanced with “the recoveries we made” as a result of, for example, overpayments or double payments to service providers.

“We actually did recoveries of money related to some of the cases… and we reported to Cabinet and the portfolio committee about our recoveries.”

As for claims of nepotism as investigated by Ndaki, she said:

“That Mr Zungu happened to be a Mr Zungu that I know, he was not appointed by me [as deputy director-general]. He was appointed by the national Department of Health. He is not my blood relation. I am not born a Zungu, I was married to a Zungu.

“It makes my heart sad again to go back to those things,” she said of being asked about the Ndaki Report, but quickly emphasised that it was a “preliminary report where I still had to respond”.

“If I were to go about the things that were written about by the media about me, I would sit and do nothing. Maybe for a month or two, I am sad and mad about everything, but when I see a need, I stand up and go and do. Just to assist. That’s how I have been from a young age to now.”

According to the Eastern Cape government, in her new position, Zungu will “work closely with the tracking, tracing and testing teams, hospital support teams and directly with regional coordinators to ensure that the tracking, testing, isolation and quarantine interventions are strengthened”.

“Dr Zungu will provide technical and clinical support for case management of hospitalised patients including the availability of oxygen, clinical protocols for patient management and rational use of ICU beds.”

While various local and international media reports have highlighted the serious neglect, corruption and mismanagement of the public health system in the province, Premier Mabuyane continues to maintain that the collapsed health system is due to the amalgamation of homeland and apartheid South Africa’s health systems, which took place about 25 years ago.

Asked about the consistent reports of corruption, maladministration and neglect in the Eastern Cape healthcare system and the province, Zungu said:

“I am trying by all means not to get involved in that. I am just trying to do the part I am assigned to do, and hope to succeed in getting ready for Covid amid everything else that is going on.”

She said the Eastern Cape was a vast province “with big rural areas that make delivering health systems equitably to the masses very difficult”.

“And then you find areas that have over the years not been able to keep up with development. You still go to areas where connectivity is an issue. So we are talking about Zoom meetings and all of that. They work under difficult circumstances. I take my hat off to the doctors, nurses, and pharmacists there. The level of commitment they have, they are really trying to make things work.

“If you look at some of the basics in the province, the roads the ambulances have to use, goodness, the ambulance, when it’s rushing with a patient on a ventilator, the calibration of the ventilator is going to be haywire, and the ambulance itself won’t last long.

“The Eastern Cape for me is a place where we need to develop a case to say ‘how can we develop services here and look at different modalities instead of taking a one size fits all approach?’ ” DM