Poverty, hunger and opportunism in the epicentre of Joburg’s Covid-19 outbreak 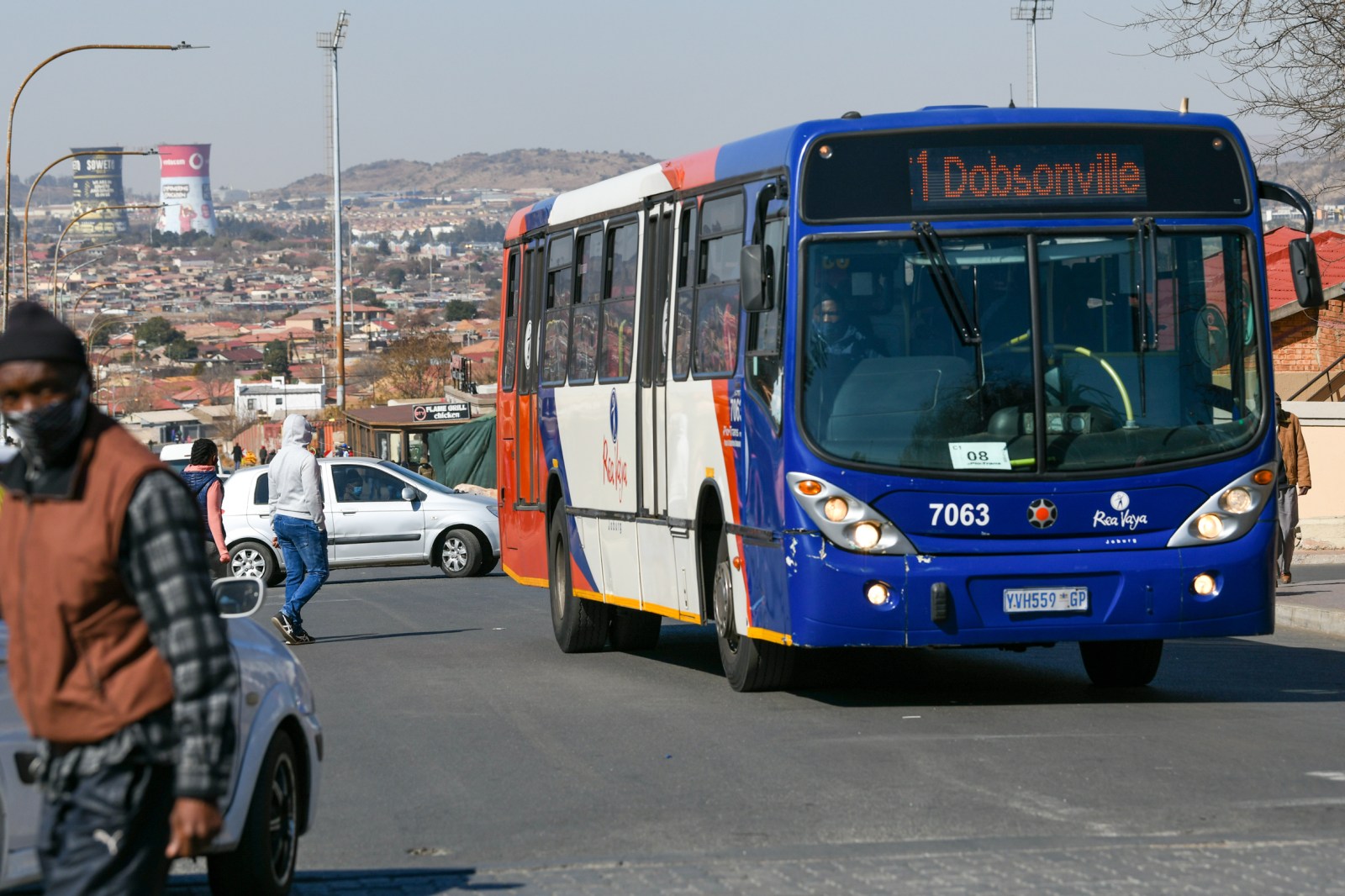 A Rea Vaya bus passes through Meadowlands, Soweto. Despite limiting the numbers in these closed enviroments it is believed that confined public areas including public transport are contrbuting to the spread of Covid-19. Meadowlands is one of the emerging hot spots for the coronavirus pandemic in Soweto. (Photo: Chris Collingridge)

Until recently, the most notable effect of the virus in Soweto was the swath of economic devastation it left. But this is changing.

Every afternoon they arrive hungry.

Children, women and men cross the Klip River that borders Eldorado Park and join the well-spaced queue along Calendula Road in Klipspruit West.

They are shack dwellers who live in an informal settlement that bears the name of the river they had to cross.

What they come for is a free meal on offer Monday to Friday.

For five years Catherine Johnson and taxi-owner Ashraf Mohapi have fed the poor in the area.

The cooking begins at 8am in a garage in Calendula Road, and they begin serving at 1pm.

It is always children first, then women and finally the men.

On Wednesday the meal was beef curry and rice.

Not so long ago they were feeding maybe 600 people, but as the Covid-19 virus destroyed incomes the numbers have doubled.

Until recently the most notable effect of the virus had been the swath of economic devastation it left across this densely populated district. But this is changing.

Kliptown is on the border of Johannesburg Region D, which over the last couple weeks has become the epicentre of the city’s Covid-19 outbreak.

On Thursday 16 July the number of Covid-19 infections in Region D, which includes Doornkop, Soweto, Dobsonville and Protea Glen, stood at 11,170 – the highest in the Joburg area.

As Health MEC Bandile Masuku pointed out in a webinar hosted by Daily Maverick, it is the people living in places like the Klip River informal settlement who are most at risk of becoming infected by a disease that is spreading like a winter veld fire through the district.

“There are no testing stations near here, you have to drive, you would have to go to Bara, [Chris Hani Baragwanath Hospital],” says one of the volunteers, Cecil Christian, who helps with the feeding.

“The problem is that people don’t see this as real.”

It is a problem not just confined to Klipspruit West. Across Region D, the criticism is that people aren’t taking the pandemic seriously.

“Maybe they will only believe it when they see someone sick, when they notice people are dying,” says Mbuyiseno Sinqotho, who owns the Tau Cybernet store in Meadowlands.

There was a wake-up call for the citizens of Soweto on Thursday. It emerged that one of the township’s most famous daughters, Zindzi Mandela, could have died of Covid-19. By Thursday it wasn’t known where Nelson Mandela’s daughter had contracted the disease, or if she had been staying at her mother’s home in Orlando West before being admitted to hospital.

Not far from Siqotho’s shop, Rea Vaya buses and minibus taxis jostle for customers on Heckroodt Circle, in Meadowlands.

The new regulations mean that taxis can now operate at 100% capacity. They are also supposed to drive with their windows open to circulate air and reduce infection. In the July winter cold, few taxis had their windows open.

Meadowlands has seen a recent spike in infections, and like everywhere else where the virus has taken hold, there is little indication that the disease is spreading. Besides people wearing masks and the odd social distancing, there is little else to show.

“People are dying at home or they’re dying in the hospitals and we’re not seeing that,” says Professor Francois Venter, an infectious disease doctor at Ezintsha, Wits University.

“There was a report that came out this morning that showed a dramatic increase in natural deaths in Gauteng and the Western Cape.”

The health MEC said it is predictable that areas like Soweto and Gauteng would see spikes in infection, because of the size of their population.

The virus does sometimes show itself in Meadowlands. Early in the morning, a queue of people gathers along Heckroodt Circle outside the Meadowlands Clinic as they wait to be tested for Covid-19. Mondays, according to the security guards at the clinic, see the longest queues.

For the moment, most Meadowlands residents are more concerned with dealing with the economic fallout caused by the lockdown, and spend their days hustling for a couple of rand.

With the alcohol prohibition back, liquor prices jumped overnight.

“Business is booming,” says one bootlegger.

A Heineken beer that went for R18 on Sunday, the bootlegger now sells for R30.

“I am actually thinking about selling it for R40 because I only have 10 cases left,” he says.

For the more desperate there are two-litre bottles of mbamba beer, a dangerous concoction of pineapple, bread, yeast and battery acid. It goes for R25.

“If the old people see you drinking, they call the cops,” laments the bootlegger.

Others are hustling more legit produce. Mirra Nkurla used to be a hairdresser but now she sells cloth masks outside the Ndofaya mall. She has noticed an uptake in masks over the last couple of days.

But among the covert drinkers, the mall rats that frequent the Ndofaya mall and the informal traders, the virus now lurks.

How it arrived in this iconic Soweto township, Venter believes, has to do with those cocoons of virus incubation, the minibus taxis and Reya Vaya buses.

Another driver of infection, he says, is the family gatherings that Ramaphosa chastised the public for taking part in, when he announced stricter lockdown restrictions on Sunday.

“I think it’s most likely the public transport that induced the spread, and it was completely predictable,” he says.

“So, it’s very infectious and, yeah, it’s going to find a faultline wherever it is, and in Soweto people are heavily dependent on public transport.”

Venter added that this was something that should have been addressed three months ago, at the beginning of lockdown.

“We knew public transport was going to be a factor. But the taxi industry just took the government on so efficiently and they just stared them down.”

Speaking during the webinar on Thursday, Masuku said that a balance was needed to keep the taxis operational and the economy moving, while also protecting passengers and drivers.

“Research that has been done indicates that… some level of ventilation and some level of social distancing, with wearing a mask, does actually decrease the chances of catching the virus,” Masuku said.

On Calendula Road the last polystyrene food box with curry and rice is handed to an old man, who suffers from epilepsy. With his box in hand, he joins the rest of the shack dwellers as they head back across the Klip River to their homes.

The virus has already reached out and snatched their livelihoods and it threatens soon to take so much more. For many, it will strike when they least expect it.

“I saw a meme the other day. It said we are all tired of the lockdown but the virus doesn’t get tired, it sits there and waits until you let your guard down,” says Venter. DM