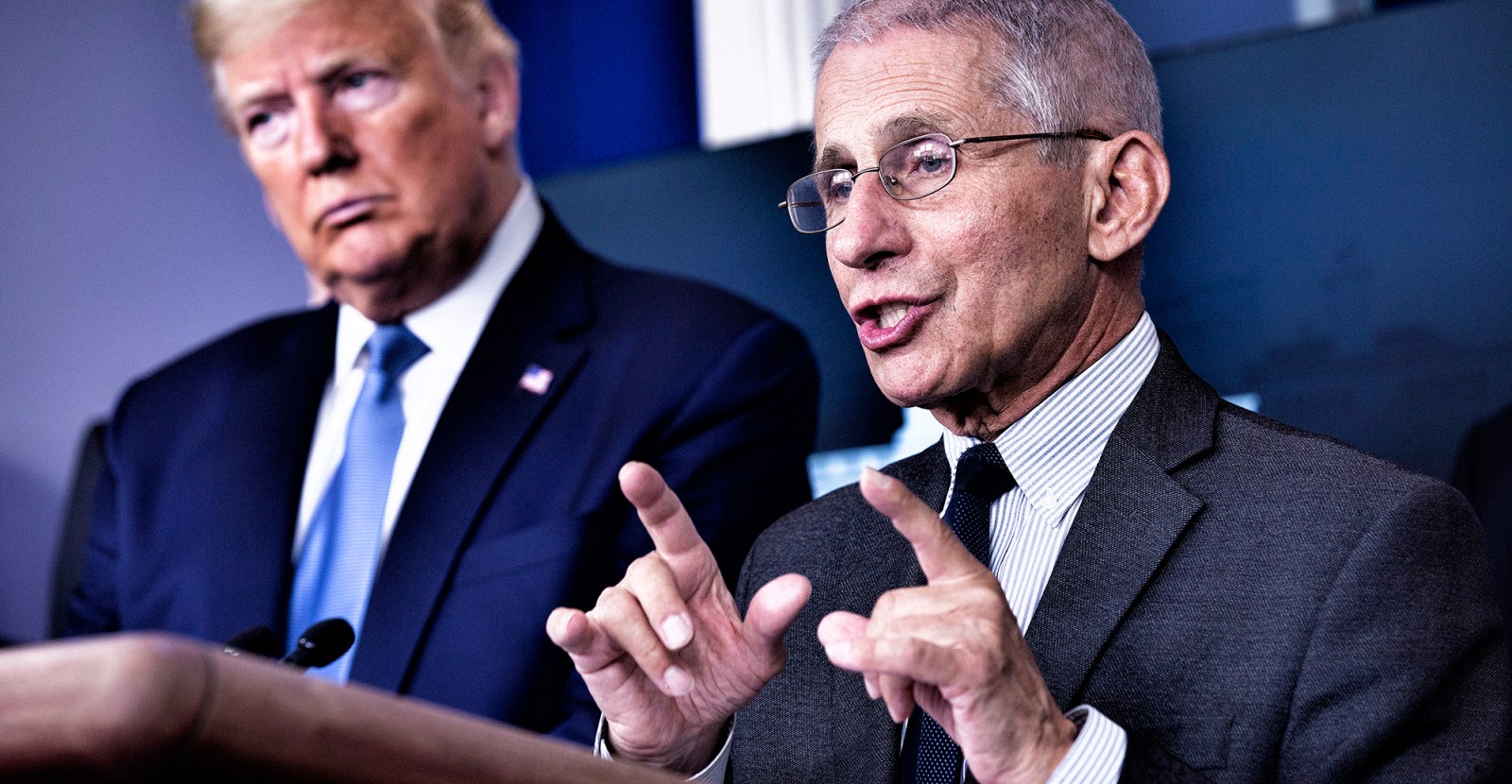 Director of the National Institute of Allergy and Infectious Diseases at the National Institutes of Health, Dr. Anthony Fauci, joined by United States President Donald J. Trump and members of the Coronavirus Task Force, makes remarks on the Coronavirus crisis in the Brady Press Briefing Room of the White House in Washington, DC, USA, 21 March 2020. (EPA-EFE/Stefani Reynolds)

While the White House was on Monday trying to get out of a “he said, she said” about what they did or did not say, which in fact they DID say (Fauci was wrong about ‘certain’ things but that he and the president got on well despite not talking for two months) about the nation’s leading infectious disease expert, coronavirus pressure in the US seems to be rapidly approaching its zenith.

The state of California is averaging 8,000 Covid-19 cases a day with just over 320,000 cases in total and 7,017 deaths. New cases in California have surged to the point where it is leading the US. America’s top infectious disease official had warned early last week that many states should consider closing again as virus numbers surged. Despite the calls from the Director for the Centre for Infectious Diseases (CID), Anthony Fauci, the weekend saw people flocking to beaches and outdoor spaces, without masks or any form of distancing.

In California, Infectious Disease Specialist Dr Lilian Abbo said, “Miami is now the epicentre of the pandemic. What we were seeing in Wuhan… now we are there.”

Florida also recorded its highest number of new coronavirus cases on Saturday – 15,300 with a state total of 282,435 cases. In California, Florida, Texas and in some other states, hospitals are at a tipping point, with Intensive Care Units at capacity, as in Mississippi.

Around the country, experts are warning that young people should be careful as they are not invulnerable to Covid-19. In New York, Mayor Bill de Blasio said they are seeing more increases in younger people (under 50) and in particular they are worried about the age group 20 to 29 which is showing an increase in positive cases. In interviews this week, Fauci said: “We have not begun to see the end of this yet.”

Fauci says the main reason that US coronavirus cases are surging is because the nation did not shut down. California, Florida, Texas and Arizona have shown the sharpest spikes.

Some 20 states reported record high numbers of infections at the weekend and America’s three largest school districts have announced that they will start the new school year in August with distance learning. This is despite Trump demanding that schools must fully open in the fall (autumn) and threatening, alongside Education Secretary Betsy DeVos, to withhold federal funding if they do not.

Trump hopes that his stance on reopening the schools will boost his bid for reelection. Last week he tweeted: “SCHOOLS MUST OPEN IN THE FALL!!!” But while he can tweet about opening schools, he has no authority over how and when schools open.

On Saturday 11 July 11, President Donald Trump wore a mask in public for the first time. It became a matter of some debate as to whether this is a sign that he will be wearing a mask in future, or whether he was scoring political brownie points. The mask has become a political flashpoint in the US, with Trump himself all but encouraging people not to wear them and ridiculing people who do – singling out Joe Biden in particular.

Globally, right now, the world is at just over 12.7 million cases and over half a million deaths. In a nation of 350 million people, with many protesting in the streets that the coronavirus was a hoax and stating that they would not wear a mask as this was taking away their civil liberties, it was no surprise that the virus surged when states started to open.

Towards the end of May, states started opening in anticipation of the summer holidays (summer officially starts on 21 June and ends on 21 September). Temperatures were warming up and Americans were not only eager to be done with stay-at-home orders, but they were eager for the economy to open up. Between mid-March and the start of May, more than 20 million jobs were lost because of the pandemic.

Currently the virus has left over 35 million Americans unemployed and experts say 40% of those jobs lost will not return. Prior to the pandemic, the US had been enjoying a 50-year record unemployment low, which by the end of April had dropped so fast it matched the 1930s Great Depression.

Earlier in 2020, in March and April, the US Congress approved a round of stimulus packages called the CARES Act – Coronavirus Aid, Relief and Economic Security Act. This included once-off cheques to citizens. Besides being roundly criticised for doing more for big business than for Joe Public, it then also turned out many of the cheques for individuals were sent to dead people – almost 1.1 million dead people.

A second round of stimulus cheques are expected to be finalised when the senate’s current recess is over on Friday 17 July. Discussion is set to start on Monday with a second round of stimulus cheques potentially ready to go out by 26 August. Last week, US Treasury Secretary Steven Mnuchin said the Trump administration was working with the senate to pass a new CARES bill by the end of July.

Trump himself told media last week, “We are working on another stimulus package.” He said he wanted people to get bigger cheques and that those cheques would arrive “very soon”. He neglected to put a date to “soon”. Also out now is the bare knuckles deep dive into the psyche of Trump which he tried very hard to suppress last week – the book Too Much and Never Enough by his niece, psychologist Mary Trump.