Slabtown, Stellenbosch: People live here, but they dream of something better 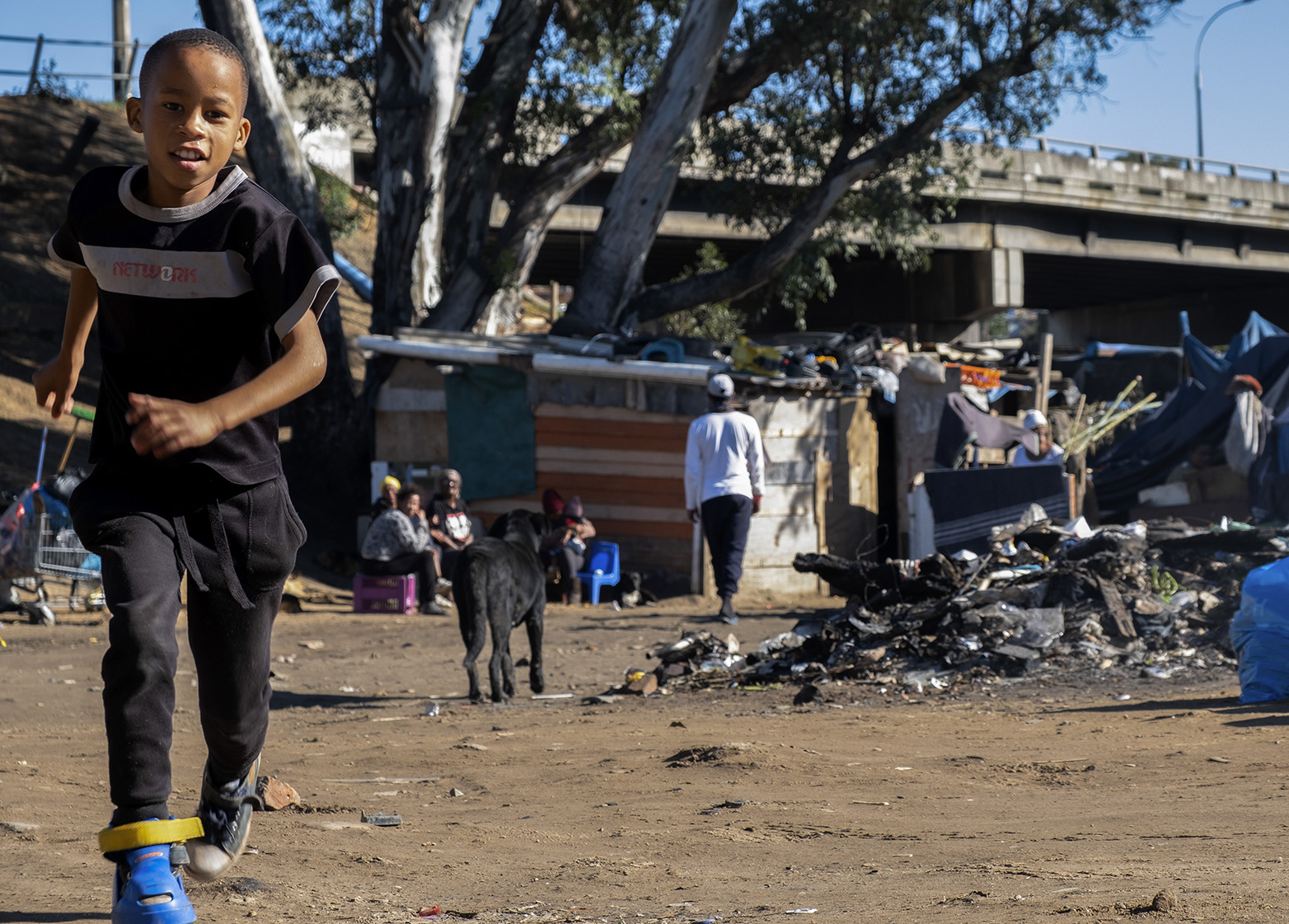 Children in Slabtown have not attended school since the start of lockdown. (Photo: Daniel Steyn)

Often referred to by the bourgeoisie as ‘bin pickers’, the recyclers of Slabtown wake early every morning – earlier on rubbish days – and start their rounds, sorting through bins and rubbish bags before the trucks get there.

At the bottom of Bird Street in the historical university town of Stellenbosch in the Western Cape, there is a bridge. Few who drive over it know that a community of people has been living under this bridge for upwards of 20 years. Known colloquially as “Slabtown”, this informal settlement has become home to some of Stellenbosch’s most disenfranchised and hard-working people.

The stench of rancid urine and burnt plastic hits us as my colleague Vusi Mokoena and I get out of the car. A man comes running across the railway, holding a makeshift weapon. It seems to be a bamboo stick with a scissor blade tied to the top. He says he’ll take us to Kop, Mokoena’s cousin who lives in Slabtown. Unsure about what his need for a weapon could be and deciding it’s too late to turn back, we follow.

The semi-structured shacks lined up against the walls and pillars of the bridge are made of cardboard, plastic, scrap metal and wooden pallets. Two elderly women stand by a small fire, warming up and trying to boil water in a kettle. From inside a half-built shack, a group of men greets and invite us for a smoke. We politely decline, dodging a growling dog as we walk on. “He bites,” our guide tells us nonchalantly.

Kop is still at work, we find out, so we’re handed over to a man called Edwin. We tell him our business: we’re journalists, Vusi’s cousin lives here, we want to write a story that will help them.

“Yes,” says Edwin, giving us a toothless smile, “we need help.” He tells us that many of the Slabtown residents are ex-convicts and some are drug addicts, while others are still criminals and gangsters. Many have never had a home, some have left abusive homes and others have lost their homes.

The main source of income here is recycling, although some also make a living from manual labour and crime. Often referred to by the bourgeoisie as “bin pickers”, the recyclers of Slabtown wake early every morning – earlier on rubbish days – and start their rounds, sorting through bins and rubbish bags before the trucks get there. They push their wares in shopping trolleys and sell it to recycling companies.

Outside Edwin’s house, there is an open piece of land, used by the residents as a processing yard. A large heap of garbage is piled up in the middle, smouldering and exuding plumes of foul-smelling smoke. These are the leftovers, we’re told. Local farmers and small businesses come to dump their garbage here. Once the Slabtown residents have removed all the recyclables, the municipality takes too long to remove it, so it’s burnt instead.

We are referred to Neil Arendse, a friendly man who seems to be a key figure in co-ordinating the daily recycling operations. He tells us that tin cans, white paper, copper, steel, glass and plastic are all valuable goods. The recyclers can make up to R50 to R60 a day selling general recyclables at 45c a kilogram. When they get their hands on copper (usually cables that are out of order, Arendse tells me), they can sell it at an average of R50 a kilogram.

Arendse served 10 years in prison and has the tattoos to show for it. They scare employers off, he says. On leaving prison, he was promised support by the government to help him reintegrate into society and secure employment. In the meantime, he settled in Slabtown, where his tik addiction was rekindled. He says he would welcome the opportunity to rehabilitate. I ask him what his biggest dream is.

“I just need enough cents to survive,” he says, “and if I could, I would love to spend time with my two children again.”

“We live day to day,” Arendse says. The recycling does not provide them with a constant income and in winter months it’s even more difficult. Recently they’ve been chased away by people in the suburbs, apparently out of fear of Covid-19. Many of the residents want to find formal work, but either have criminal records or don’t have the proper documentation. A recent shack fire destroyed many of their IDs and birth certificates, we’re told.

On occasion, charities bring them food, blankets or clothing. A local pastor comes every Sunday and prays for them, always bringing donations with him. But it’s unsustainable to rely on goodwill when there is so little of it, Arendse says. It is certainly not enough to restore their dignity, let alone allow them to rise out of the conditions they live in.

Jennilene Jones, an 18-year-old woman, has been living in Slabtown for two years. She used to live in Cloetesville before her mother married an abusive man, rendering the environment at home far less desirable than Slabtown. She still goes home every day to say hello to her mother, but the atmosphere there is too uncomfortable.

“At Slabtown, we live together as a family,” Jones says, “and we stand together.” For example, if you don’t have a candle one night, you can always ask someone else to lend you one. Or if someone comes to donate food and you’re not there, the others will make sure to keep you some. Newcomers are always welcome to share residents’ shacks.

We spot a group of older women sitting in a semicircle, observing the day’s activities. They freeze when we join them. We introduce ourselves, but they don’t want to speak. “Houses,” is all they say, “we need houses.” They decline to answer any other questions.

“Too many people have come here to make promises,” Fabiola Wilson tells us, “that’s why they won’t talk.” She says that government officials do not treat them like people. Police often carry out raids for drugs and stolen goods, destroying all of the structures, regardless of which ones belong to innocent people.

Sometimes, the area becomes a battleground between police and criminals. Recently, a resident was violently evicted and taken to a hospital, apparently because they are HIV-positive and could be more vulnerable to Covid-19. “It was just unnecessary,” Wilson says.

Asked about the Stellenbosch Municipality’s plans for the area, communications manager Stuart Grobbelaar said that development plans for the area include “a portion of the site [being] utilised as a transport hub, and will also include approximately 15 kiosks for trading”.

Grobbelaar also said that in the past, the municipality had assisted the families of Slabtown with alternative accommodation “as far as possible” and that some of those families had returned to Slabtown.

“The municipality is in the process of investigating 11 sites in Cloetesville to address the current challenges families are facing in this area,” he said.

Wilson says her biggest concern is for the children. They are traumatised by the violence in the area, she says. She wishes that the government and private sector would step in to help the children and support them to ensure they can break free from these conditions.

“We don’t want everything on a silver platter,” she says, “but we just want them to lift a finger to help the kids break free from this life.”

On our way out, we take some pictures. Children are playing. A boy, no older than 10, skates towards us on some old roller-skates to have his picture taken.

A girl, even younger than the boy, is rummaging through the rubbish, picking out items she finds interesting or pretty. She shows us a picture she found – an old lady sitting in a lush garden with a dog at her feet. Someone’s unwanted family photo is another’s prized belonging, offering a fleeting glimpse of a different, more beautiful world that she can only dream of. DM/MC

Daniel Steyn is a filmmaker-writer from Cape Town, inspired by stories of activism, change and courage.

Vusumzi Mokoena is a multimedia storyteller from Kayamandi, Stellenbosch.