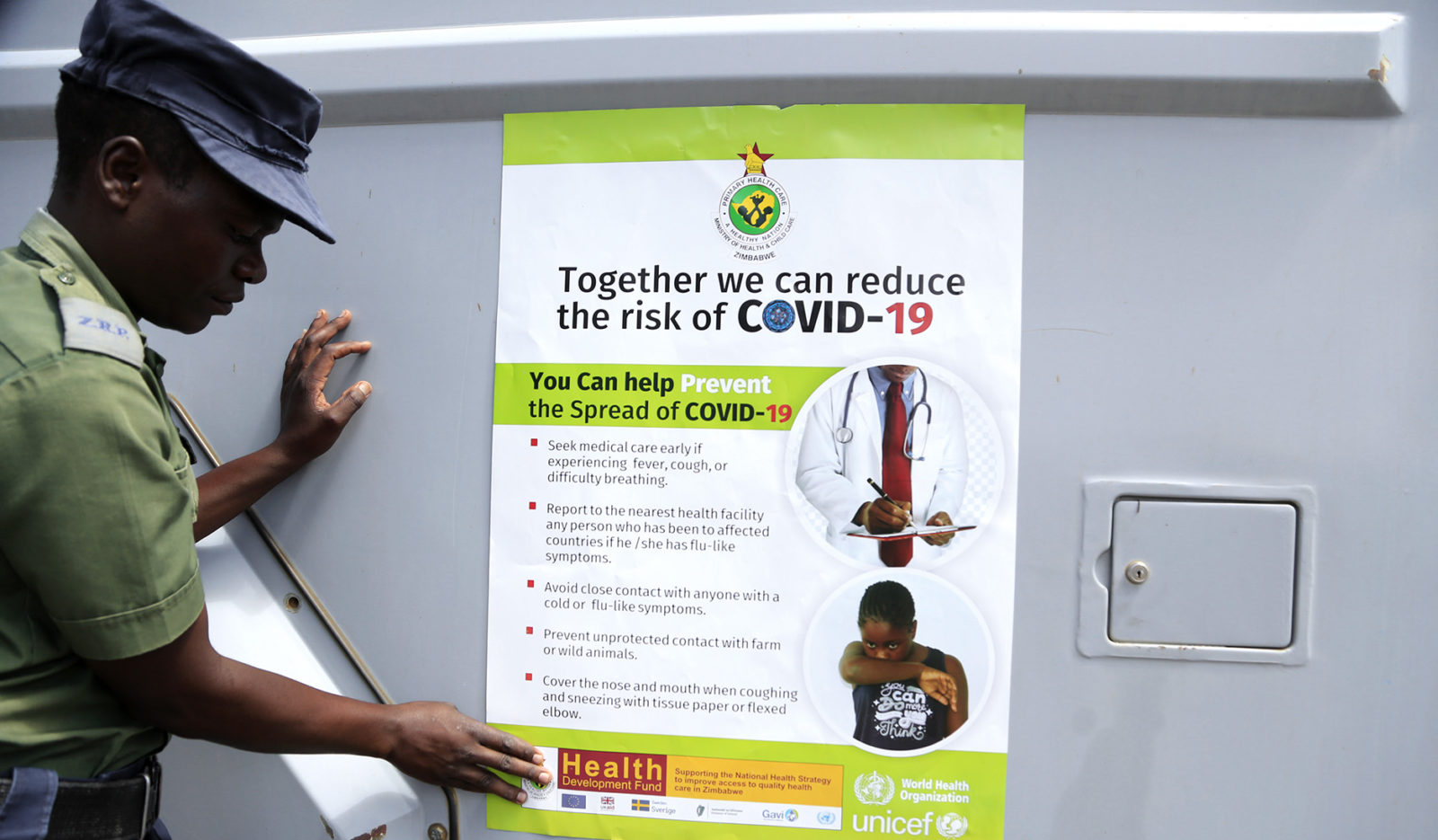 A Zimbabwean police officer affixes a coronavirus information poster on a truck in the Mbare township of Harare, Zimbabwe. (Photo: EPA-EFE /Aaron Ufumeli)

Dr Obadiah Moyo, Zimbabwe’s Minister of Health and Childcare, has been fired following his involvement in a US$60-million deal for the procurement of Covid-19 medical supplies by Drax International, a company allegedly linked to the first family.

A statement issued on 7 July by the Chief Secretary to the president and cabinet, Dr Misheck Sibanda, reads:

“Please be advised that his excellency President E.D. Mnangagwa has removed Dr Obediah Moyo [sic] from the office of Cabinet Minister with immediate effect… for conduct inappropriate for a government Minister.”

Dr Moyo is currently out on bail of Zim$50,000 (US$2000). Dr Moyo is expected to appear in court on 31 July 2020. After he was arrested on Friday 19 June over allegations of attempting to embezzle government funds by awarding a contract for Covid-19 testing kits, drugs and personal protective equipment (PPE) worth over US$60-million to Drax International LLC, Drax Consulting, and Papi Pharma.

According to prosecutors in court on 20 June, Moyo was charged with criminal abuse of office. He is alleged to have instructed his ministry’s permanent secretary, retired Major-General Gerald Gwinji, to process paperwork and award the tender to Papi Pharma under a direct purchase.

Prosecutors further alleged that Moyo used his position and influence by verbally directing the ministry’s permanent secretary Major-General Gwinji to engage Papi Pharma before a report on due diligence had been received from the Treasury.

Moyo’s alleged accomplice and Drax country representative, Dilesh Nguwaya, is out on Zim$50,000 bail on charges related to the Covid-19 procurement scandal. His bail conditions required him to surrender all his travel documents with the clerk of the court at Harare Magistrates Court, and reside at his house in Sandton, west of Harare city centre, until his trial is finalised, and not interfere with the state witness.

Nguwaya is alleged to be friends with President Mnangagwa’s twin sons, Shaun and Collins, and has been seen with them at private and State House functions.

Nguwaya made fraudulent misrepresentations to government officials by claiming that Drax was a manufacturer of drugs and medical equipment. Without following tender procedures due to the facilitation by Dr Moyo, Nguwaya then overpriced the government procurement. He was initially remanded into custody by a magistrate’s court but later appealed to the High Court which then released him on bail.

On releasing Nguwaya, High Court judge, Justice Pisirayi Kwenda, said in his ruling: “The fact that the medicines were overpriced should have been picked by state officials during due diligence or a competitive bidding process.”

On 25 September 2019, the permanent secretary in the Ministry of Finance, George Guvamatanga, had raised concerns in a letter addressed to Dr Agnes Mahomva at the ministry of health over the Drax deal. It is however alleged that Dr Moyo personally called Guvamatanga claiming that new information had been received and Drax was cleared for transactional purposes with the government.

According to the charge sheet, Dr Moyo forced his subordinates to award Drax the tender for supplying Covid-19 medicines and equipment through National Pharmaceuticals (Natpharm).

Drax went on to supply the first consignment for US$2,733,980 which was then paid into an offshore account. The supplies were overpriced and Moyo is accused of having prejudiced the country of US$17,266,020 in all the transactions involved.

Moyo’s sacking and the arrest of protesting nurses

Moyo’s sacking comes at a time when more than 13 nurses have been arrested for demonstrating against poor remuneration and working conditions. Amid the Covid-19 pandemic, nurses, doctors and their support staff across the country are demanding protective gear.

Zimbabwe Republic Police (ZRP) arrested striking nurses at Sally Mugabe Hospital in the capital city Harare, on allegations of contravening section 8(3)(a) of the Public Health (Covid-19 Prevention, Containment & Treatment Regulations). The 13 nurses were arrested on 6 July. Two nurses were released after paying admission of guilt fines which allowed them to attend to their children as they are breastfeeding. The other 11 nurses were ordered to pay ZW$1,000 each and to report once a week at various police stations.

“As lawyers, we decided that we should help the plight of the demonstrating health workers by representing them in court. We are calling on the government not to infringe on their constitutional right to demonstrate.”

In a statement by Amnesty International the Deputy Director for Southern Africa, Muleya Mwananyanda said:

“The charges levelled against these nurses under the pretext of enforcing Covid-19 lockdown regulations intend to prevent them from organising and speaking out against low wages and terrible working conditions.

“Authorities must stop intimidating and suppressing dissent but instead start listening to the genuine concerns of healthcare workers, because it’s important in effectively containing the spread of the virus.”

Before the sacking of Moyo, Zimbabweans across the political divide had been calling for the dismissal and prosecution of the former health minister under the hashtag #ObadiahMoyoMustGo.

Another hashtag, #July31, has been called by opposition parties and civic organisations for a nationwide public protest on 31 July to force President Emmerson Mnangagwa to step down. Mnangagwa is accused of destroying the economy and impoverishing millions by allowing massive corruption and human rights abuses under his administration.

Former President Robert Mugabe was deposed by a military coup supported by millions of citizens across the country who marched against him in November 2017. The military announced via the state broadcaster that they were targeting corrupt criminals around the former president.

Moyo is the second minister under Mnangagwa’s administration to be arrested after tourism minister Prisca Mupfumira’s arrest in August 2019 on similar charges of corruption and embezzlement of public funds. Mupfumira has not been convicted.

If convicted, Moyo could face up to 15 years in jail. DM