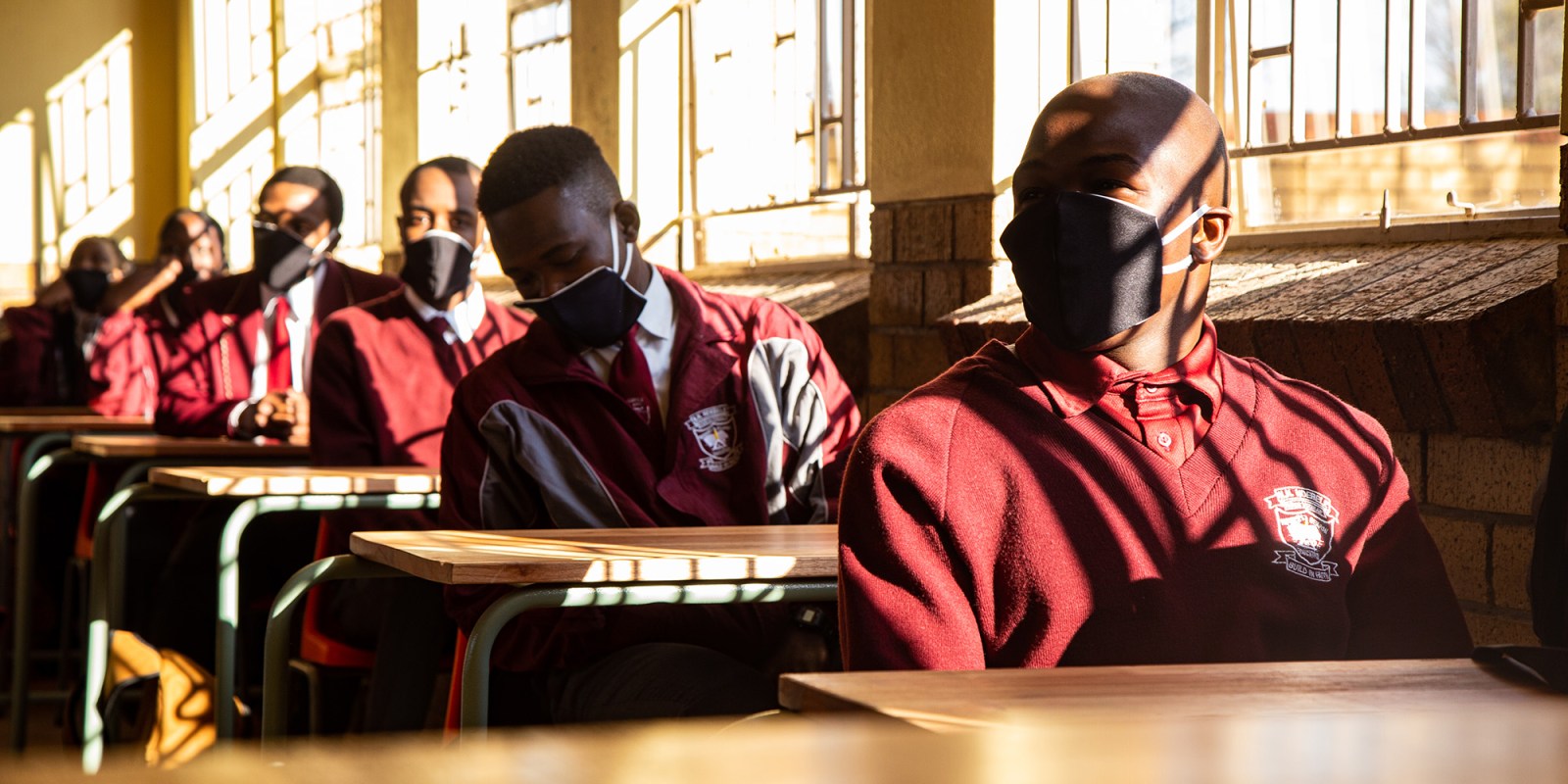 The question is not: ‘When is it safe to reopen schools?’ The question is: ‘Does the cost of closing schools outweigh the benefits?’ says the writer. (Photo: Gallo Images/OJ Koloti)

Almost half of educators in South Africa report having at least one comorbidity, posing a serious challenge to the resumption of classes. Daily Maverick spoke to one Limpopo school principal with comorbidities who described his fears as he waits for the department of education to approve his application to work from home.

A 59-year-old school principal from Limpopo, who asked not to be named, told Daily Maverick he’s been waiting since 12 June for the provincial department of education to approve his application to work from home.

“I submitted my medical report and supporting documents three days after I returned to school over the fear that my conditions put me at high risk of contracting the virus,” he said.

The principal, who has been an educator for 35 years, lives with two chronic illnesses – type 2 diabetes and hypertension – both of which have been flagged as high-risk illnesses by the department of education.

He is one of the many educators in South Africa whose health, because of underlying conditions, is more at risk now with schools having reopened and more grades being phased in.

A survey conducted by teacher unions in conjunction with the Respiratory and Meningeal Pathogens Research Unit (RMPRU) and the Vaccine-Preventable Diseases Unit (VPD) of the Department of Science and Technology/National Research Foundation found that of the 130,655 respondents that completed the survey, 49.8% reported having at least one comorbid condition.

The survey also found that the prevalence of comorbidities in educators increased with age.

A concession agreement entered into by the department of education, teacher unions and the Education Labour Relations Council (ELRC), which contains procedures to be followed when dealing with educators with comorbidities, permits teachers to stay at home while they wait for approval.

However, the Limpopo principal continued to report to work until Monday 6 July. Last week, he told Daily Maverick about his concerns.

“They [district officials] said I must come to work until they approve the application. My concern is that I can get… [the virus] while I am waiting for that process. I don’t even know how long it will take.”

The principal, who is from Vhembe district, told Daily Maverick that he lived in fear “because people of my age who have underlying health issues are dying of this virus, and if I stay at home it means I risk my income”.

The SA Democratic Teachers Union (Sadtu) advised him to stay at home until his concession was approved within the 30-day period. Consequently, he did not return to work as of Monday

The concession of staying at home, instead of taking risks by going to work, is in fact in the agreement.

According to the agreement, the head of the department “may subject the application to the health risk manager or health professional for further assessment for a period not exceeding 30 calendar days”.

During this time, the educator “shall be allowed to remain and/or work from home with full pay whilst waiting for the outcome”, the concession agreement states.

The agreement notes type 2 diabetes, severe hypertension, severe obesity and chronic lung problems as high-risk illnesses, and educators over the age 0f 60 who have one or more of the listed illnesses are at high risk.

At the height of the discussions around the reopening of schools, teacher unions insisted that educators who are vulnerable to Covid-19 because of age and underlying health conditions be given an option to either work from home or be granted leave until the virus is no longer at its peak.

The principal said he followed up with the department to track progress on his application, which is now almost a month old.

“An official from the district offices told me they are understaffed. Because of Covid-19 regulations, they are working as a small team and this means they can’t capture all applications at once.”

Tidimalo Chuene, spokesperson for the department of education in Limpopo, said the department had granted 798 concessions out of the 948 applications it had received.

“There are those who don’t qualify but were not told whether they qualify or not… that is a delay in itself. Then there are others who qualify but have also experienced a delay.”

He said the resolution of the collective agreement states that immediately after an educator submits the application, “they must stay at home”.

“We have encouraged all our members (who applied) to stay at home pending the outcome of their applications.”

While briefing Parliament’s education committee on 30 June, the national department’s director-general, Hubert Mweli, said of the 400,000 educators in the employ of the department, 20,140 had applied for the concession.

By the end of July, it is expected that one million learners will be back at school, with Grades R, 6 and 11 having returned on 6 July.

Some believe that as more learners are phased in, there will be a need to recruit more educators to be able to practice physical distancing by minimising class size, and also to cover the shortfall of educators with comorbidities. However, Motshekga disputed this in a written reply to a parliamentary question by DA MP Nomsa Marchesi.

“Schools will use various models to accommodate learners; all of them including alternate times/days/weeks attendance, depending on the context of a particular school.

“Therefore, the same number of teachers will be used to teach in terms of the trimmed curriculum and reworked timetables. On the whole, there will be no need to appoint additional educators in large numbers to accommodate social distancing.”

“So far, the department is not under any pressure to provide substitutes as not all learners are back at school yet, and the available educators are adequate for the operation of the schools.

“But going forward, the department has proposed timetabling based on a rotational schooling model that will ensure that a school should not at any given time operate at more than 50% capacity. However, for any unforeseen circumstances, the plan is to substitute the educators granted concessions utilising a database of excess educators, Funza Lushaka graduates and the unemployed educators’ database kept by districts.”

In the Western Cape, educators have been protesting against allowing learners to return to school amid South Africa’s peak in coronavirus infections.

“We are expected to give it our all and teach learners as if we are not in the middle of a pandemic. This virus is dangerous, and it kills. So, how can we work freely when we know our health conditions place us at risk?” the principal said. DM