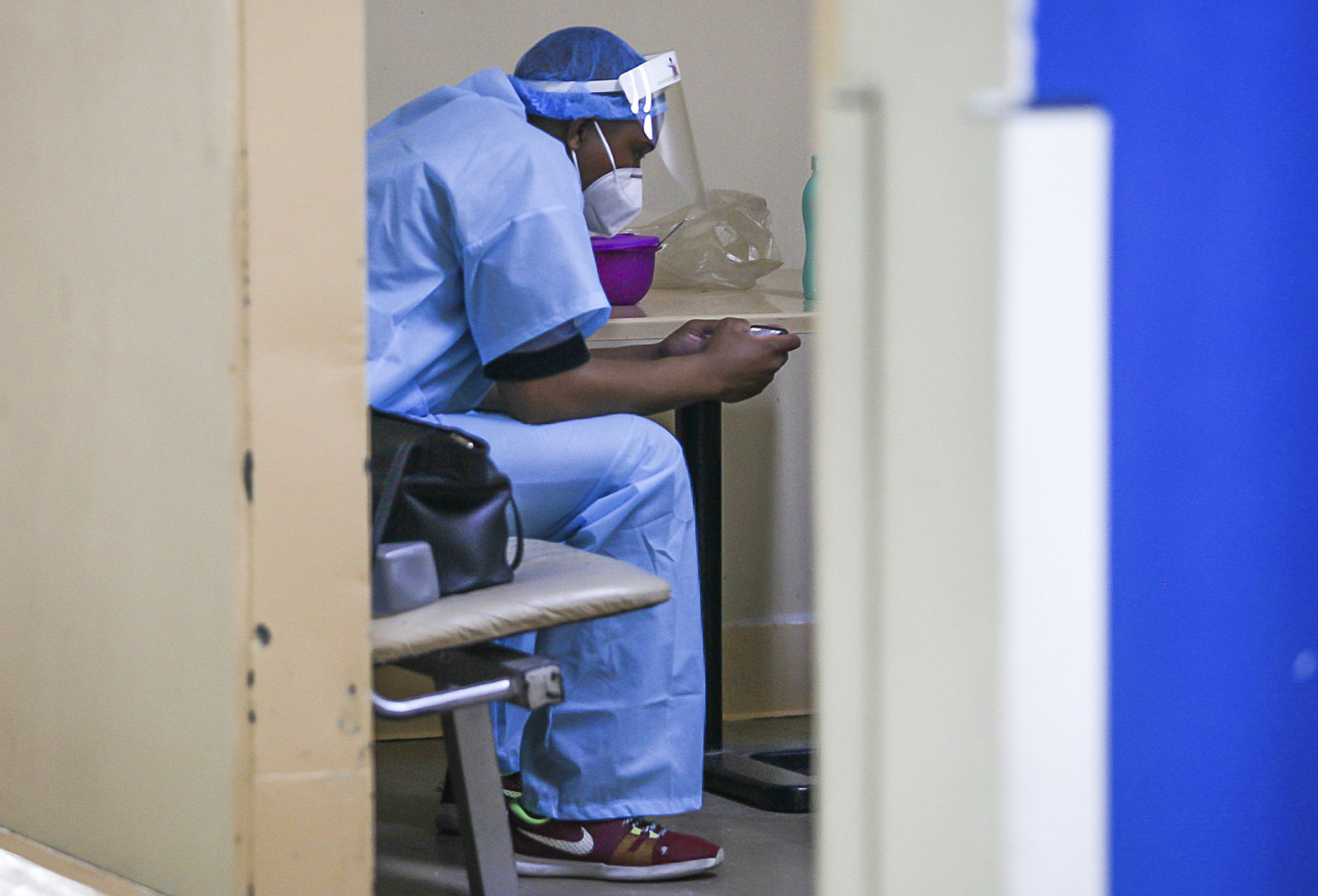 The recent suspension of clinician Ebrahim Variava, and the subsequent lifting of the suspension – briefly placed the North West health department in the national spotlight. The department has been under administration for over two years. Marcus Low asks whether the latest developments are symptomatic of still deeply entrenched dysfunction.

On 29 June, Spotlight reported that the controversial suspension of prominent North West clinician Professor Ebrahim Variava was lifted following a public outcry. But while Variava is back at work, many other senior employees of the North West Department of Health remain suspended – among them, six directors and five deputy directors.

From dodgy contracts with the Gupta-linked company Mediosa and the ambulance company Buthelezi EMS, to crippling strikes and ongoing medicines stockouts, the province’s health department has been in the headlines for mostly the wrong reasons in recent years.

It came as little surprise when, in April 2018, Cabinet placed the department under the administration of the national health department, deploying deputy director general for primary healthcare, Jeanette Hunter, to act as administrator. Since then, the former head of the provincial health department, Thabo Lekalakala, has been fired and charged with fraud. But how much has changed beyond that? What is the situation in the department more than two years after it was placed under administration?

Are the recent medicine stockouts and the suspension of Variava merely blips on the department’s road to recovery, or are they symptomatic of still deeply entrenched dysfunction in the department?

Trusted sources in the province suggest not much has changed, but since the department is under administration, we sent questions to the national health ministry to get their side of the story. We received a detailed set of responses approved by deputy health minister Joe Phaahla. We draw on these responses in the analysis below, but for a complete picture we recommend you read his responses in full.

At the beginning of June, Director of Affordable Medicines at the department of health, Khadija Jamaloodien, told Spotlight that the two provinces most severely impacted by medicine stockouts are the North West and Limpopo. A survey conducted by the Stop Stockouts Project during lockdown found that the North West and Free State were the two provinces experiencing the most serious supply issues. Spotlight also reported in May on a long list of medicines being out of stock in the North West.

While there has thus been some marginal improvement, how is it that more than two years after being placed under administration, the North West still has some of the country’s worst stockouts?

One reason appears to be that some suppliers haven’t been paid for years. “Availability in this area is being negatively affected by a large number of backlog payments (as far back as 2014) that were only discovered in June 2019,” says Phaala. “A large number of invoices for these payments are in the process of being reconciled.”

Phaala suggests that these unpaid bills were only picked up because of improvements in pharmaceutical management that came about because of the national intervention.

A further snag is that these unpaid bills means that the North West health department’s accruals have been understated in recent years. Like many other health departments, it’s already constrained by very substantial accruals – something that can potentially have many negative consequences, such as vacant healthcare worker posts being frozen.

A second related reason for the province’s ongoing stockouts has to do with management shortcomings, both in the department and at the medicines depot. In February last year, four employees were suspended – ostensibly in an effort to sort out these problems. More than a year later, the four employees remain suspended and stockouts remain a problem.

Phaahla claims that there is now “improved HR and management capacity” resulting in “transparent accounting processes” at the depot. But he also says that for sustained improvements in this area, new managers need to be appointed to oversee the pharmaceutical operations, but “this has to await the outcome of the disciplinary process”. The disciplinary process here refers to the four employees who have already been on suspension for more than a year.

In April 2018 we reported in Spotlight’s Health4Sale investigative series how the North West department of health used over R100-million earmarked for HIV to pay the private ambulance company Buthelezi EMS (B EMS), and how the department allegedly overpaid for B EMS’s services. The then health minister Aaron Motsoaledi asked National Treasury to investigate. In July 2019, President Cyril Ramaphosa signed a proclamation tasking the Special Investigating Unit with looking into the contracts with B EMS.

Some of our sources in the Free State and North West (the only two provinces with large contracts outsourcing ambulance services to private companies) argued that there was a deliberate attempt in these provinces to reduce public sector capacity to open the door for B EMS. The evidence that there was such a deliberate effort is circumstantial (reduced investment in public sector capacity, tender irregularities, etc), but compelling.

Either way, in the North West at least, it seems the focus has now shifted to in-sourcing and building the state’s ambulance capacity.

“In 2018 the department deployed 38 new ambulances and in 2019, 48 new ambulances and 20 planned patient transport vehicles,” said Phaahla. He also said that 20 advanced life support paramedics had been appointed (an almost implausibly high number given the scarcity of this level of paramedic) and that issues around the payment of overtime to EMS staff had been sorted out.

We also asked whether any funds have been recovered from B EMS, given the alleged overcharging. Phaahla responded: “B EMS claimed R285,184,059 for services rendered to the NWDoH. A service-to-invoice reconciliation and verification process could only confirm R222,182,473 and only this amount will be paid to B EMS after this company’s issues with SARS have been resolved.”

In other words, they found that B EMS overcharged the department by R62-million. That this kind of thing is being picked up and acted on is certainly a step in the right direction.

For someone in government, Phaahla is refreshingly frank about the governance challenges in the North West health department. He writes: “The breakdown in leadership and governance was one of the issues that was identified in the situational assessment at the start of the intervention. Corruption and flouting of procedures was, and are in some areas, still rampant.”

He goes on to mention “numerous expired contracts linked to key services”, “flouting of regulations”, “lack of capacity”, “indications that the inefficiencies in supply chain management were being deliberately perpetuated”, and that “corruption was found to be pervasive throughout the department, at all levels”.

But while acknowledging that some problems persist, Phaahla insists that they have made significant progress over the last two years.

“The intervention began with a work plan based on a diagnostic assessment. The work plan contains 111 activities and, to date, 74% of these activities have been achieved. The intervention has been successful in bringing about necessary stability to the NWDoH. The problems found in the NWDoH by the intervention team were many and complex. As pointed out, above, two-thirds of these have been resolved while a third is still being addressed. The most stubborn of which relate to supply chain management issues.”

Labour relations also seem to have improved somewhat over the last two years. The province’s healthcare system has not been paralysed by strikes as it was in 2018. On paper, there is certainly much that creates an impression of progress, even if it is slow.

One area the department clearly does not have fully under control, however, is its finances – with accruals of over R1-billion.

The Democratic Alliance lays the blame for the department’s ongoing money problems at Hunter’s door. “The inability of the administrator, Jeanette Hunter, to successfully steer the department out of its dire financial straits, since her appointment in May 2018, speaks volumes and should be enough reason for her to step down,” they said in a recent statement.

Over the two years of administration, the vacancy rate in the North West health department has decreased only marginally from 20% to 18%. The vacancy rate for senior management posts has dropped from 31% to 26%.

Adding to these high vacancy rates, the department also has significant numbers of suspensions, especially at more senior levels.

A total of 26 suspensions does not sound like much, given that, according to Phaahla, the province has 21,000 employees. But, according to Tebogo Lekgethwane, spokesperson for the provincial health department, six directors and five deputy directors are suspended. This is worrying given that these suspensions come on top of the already high senior management vacancy rates.

In addition, of the 26 suspensions, 11 have been in place for more than six months “due to the nature and complexity of the investigations”.

Given all the alleged corruption and the serious supply chain management problems in the department, some suspensions are of course to be expected. This is certainly the line taken by Phaahla.

But, as the case of Variava’s suspension has shown, not all suspensions are necessarily warranted. In fact, in talking to sources in the province, we believe there is at least one, but probably a few more, highly competent people in the department who are currently suspended but who shouldn’t be.

If you add to this the fact that the four pharmaceutical and depot suspensions have dragged on for more than a year, the picture that emerges is not one of a department with efficient and fair internal governance processes.

One common refrain we’ve heard from people in national government over the years is that placing a provincial department under administration gives you responsibility without much power.

The validity of this concern is arguable since legally, administrators do in fact have significant powers. Perhaps the more important question regarding power is how much political and technical backing the administrator has – something that is particularly important given how politicised and embroiled in internal ANC factionalism some provincial departments have become.

A related concern is that national departments don’t typically have teams of high calibre managers waiting around, ready to be deployed to provinces.

There has been no indication that Hunter has lost the confidence of Phaahla or minister Mkhize, and accordingly it seems very unlikely that they will bend to the DA’s wishes and replace Hunter with a new administrator.

Much more likely is that Hunter will stay on until the department is taken out of administration – something that might happen relatively soon given that the minister in July last year approved “a road map for exit of administration”.

Whether the department will be ready to manage its affairs efficiently, fairly and lawfully once it exits administration, remains to be seen. DM/MC