As restaurants founder, one takes a calculated risk and appoints top chef 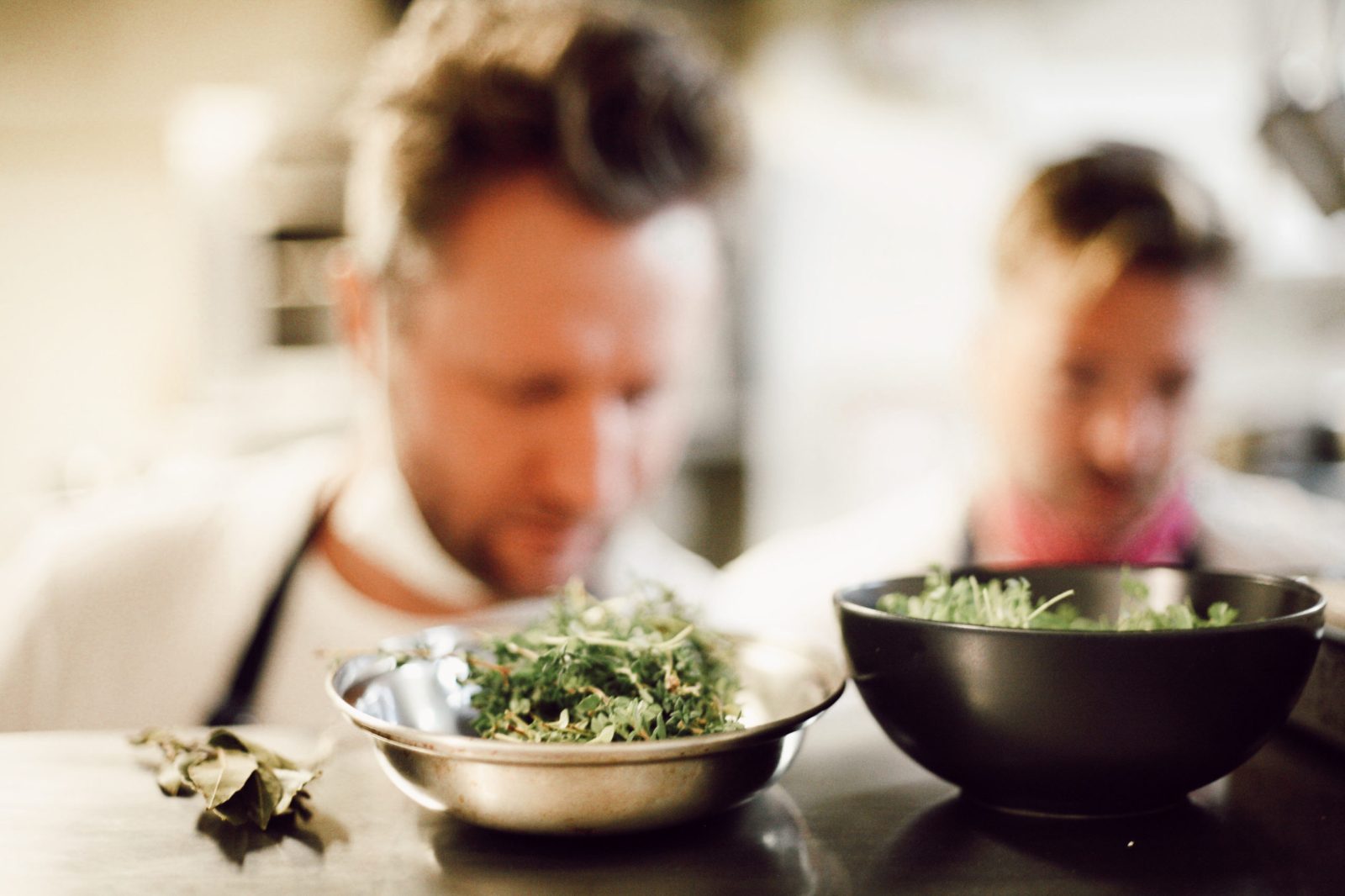 La Mouette in Sea Point reached a 10-year milestone this May. With it, a splitting of business interests for the partners involved. And news that private chef Neill Anthony has stepped into the kitchen.

The obvious question is: who hires a chef during a pandemic, when restaurants everywhere are teetering from one month to the next? It could be about a mindset change and a business owner bungee jumping into financial risk, or merely one determined that a loyal customer base will support good modern cooking. After questioning La Mouette’s new sole owner Gerrit Bruwer, it seems it’s a little of all of that.

Numerous cafés, bistros and franchise restaurants that survived lockdown are closing their doors for good. Without customers stopping in for coffee, lunchtime salads or smart wining and dining experiences, no neighbourhood favourite is immune.

“Fortune favours the bold,” Bruwer laughs. “People are still going to eat out.” La Mouette has been closed for the past few months; its staff are living off UIF payouts. Bruwer is obviously cognisant that with ever-changing government regulations, restaurants remain in a precarious position.

La Mouette dining tables are located inside a charming double-storey in Sea Point’s Main Road, on the Bantry Bay end. The restaurant was a business collaboration between university friends Bruwer and Mari Vigar, and Vigar’s British chef husband Henry. During 10 years of operation, it was well regarded for prettily plated modern tasting menus that originated in French classics, at attractive price tags. The elegant atmosphere offered smartly comfortable dining in an old-fashioned space.

“Henry felt that, after 10 years, creatively it was time to move on. La Mouette’s lease was ending this year, so Gerrit, Henry and myself started that conversation a while ago,” says Mari. So this year the trio untangled the partnerships – the Vigars now own Upper Bloem, with Bruwer as the sole owner of La Mouette.

Anniversary celebratory plans were on the cards for May 2020 regardless, rolling out a sort of La Mouette greatest hits tribute. Unfortunately it was all halted by lockdown. “We’d planned a 10-year celebration, with a nostalgic menu of all Henry’s favourite dishes,” says Mari. “The bouillabaisse, the chorizo popcorn prawn dish, those oozy cheese croquettes from the tapas menu … We were going to do that for the months of April and May.”

Bruwer says the business relationship may have changed but the friendship remains strong. “We all just wanted to do our own thing.” (Bruwer is godparent to the couple’s young son, William.)

Bruwer and Neill Anthony are friends too. With La Mouette having no head chef, they decided to collaborate.

“I’ve been friends with Gerrit since I returned to South Africa in 2010,” says Anthony. “With the split of the partners and him needing a hand in the kitchen, it’s a consultant-style role. I’ll be super hands-on in the first couple of months.”

Will Anthony lure La Mouette’s long-time dining regulars? The Zimbabwean-born chef grew up in Tzaneen. He’s slogged in good London kitchens (Gordon Ramsay, Marcus Wareing and Alyn Williams) but you’re more likely to know his face from TV show Private Chef, where he cooks in the homes of South Africa’s well-heeled. He would typically be filmed knocking together a snack for himself and doing some advance prep, then turning up in a leafy suburb to cook for the host plus eight or 10 friends. He makes entertaining seem easy and food approachable in a Jamie kind of way. The third season premiered on DStv in late 2018.

“I haven’t run a kitchen for a couple of years, but I’ve run some tough ones and it’s like riding a bicycle. So we’ll see how the public reacts when we’re allowed to open,” he says.

Interior spaces have just been freshened with a greyish-blue coat of paint. Customers can comfortably distance in upstairs or ground-floor dining areas, in this double-storey space. Yet rent and 35 staff wages have to be paid.

Anthony officially started as La Mouette’s culinary adviser in July. The restaurant will offer a five-course winter tasting menu for R350, plus two and three-course a la carte menus.

He uses descriptions such as “classic” and “more towards what I’d call modern European” and “four things per plate” and “nothing over-complicated”. He continues: “The dishes will always have a nice textural element. We’ll do cured yellowtail, wrapped like a rose. Then a Middle Eastern labneh yoghurt, with a fennel and almond sauce on the side, with dill oil to freshen it up.”

Supplier-focused cooking, with a lighter touch. “Maybe we’ll do a ham hock ravioli with fresh podded peas in a pea vinaigrette. Any chef can cook a fucking beef fillet or chicken breast, but when you focus on the little things that make a dish impressive – like the spoon of pea vinaigrette, it also just shows that the chef fucking cares about it.”

“We’ve developed and written the menus. All the staff are keen and raring to go. We just need the green light. But without alcohol sales, it’s a really tough one,” says Anthony. “Alcohol takings mean keeping a restaurant afloat with a R5,000 table, as opposed to a R3,000 table barely breaking even.”

At this point, opening dates are fluid. Bruwer favours La Mouette opening for in-house dining only once alcohol may legally be served. “This type of dining is all about the experience, the food, the ambience,” says Bruwer. “To open and just do food, when you can’t do the numbers thanks to seating restrictions, with no alcohol sales (30 to 40% of takings), and it’s winter.” At least there are fireplaces.

Anthony opted for a hard slog apprenticing in good restaurants instead of attending culinary school. “I always wanted to be a chef. But didn’t see the point in going to school to learn how to fry an egg,” he says. “We’re a large family – I’m the youngest of five. My mom is a good cook, my sister is a chef as well.” With a British passport, London seemed the place to do it. He started as a commis chef.

Food cheffy TV was just becoming popular, with Gordon Ramsay filming his first show, Passion for Flavour. Anthony (who, like Ramsay, is not shy to drop F bombs) wanted to work for Ramsay (and later did). “Alyn Williams at The Groucho Club in Soho was my foot in the door. I knew a guy who knew a guy. That’s how it all worked back then. There was no social media, you looked for a job in TNT or the Yellow Pages. I started off peeling fucking potatoes and doing whatever I was told. It was probably 2004.”

Years later, Anthony has put in the yards and built a reputation internationally as a private chef, with one-week stints for overseas clients in Miami, Los Angeles and London. He just made it home before lockdown. In contrast, most local private cheffing gigs are one-off dinner parties. “Everybody thinks it’s really out of reach price wise. But a table of 10 at a good restaurant is going to cost R2,000 a person anyway. So you may as well spend R20k and sit in your home, using your cutlery.”

Naturally Anthony has a strong social media following – “you’ve got to play the game to be top of mind” – but says his private clients are generally older and don’t find him that way. “The guy who gets hold of me is a businessman who doesn’t have time for that sort of shit. He’ll attend a dinner party where I’m cooking, or ask one of his mates – you need to be in that sort of circle.”

“Generally the private chef lifestyle is better because you’re not getting to a restaurant at 5 in the morning and leaving at 1am,” he reflects on why he took this route. “But it’s not all foie gras and caviar. I’ve done jobs where we’ve pulled 24-hour days. Some of the time I’m making mac and cheese for the guy’s kids. The mentality is that if you’re paying me a good daily rate, I have to be on call.

“I’ve been cooking in Cairo where I was asked by a client to BBQ a whole sheep at 6am. Fortunately you can run down a street to buy a whole sheep or goat, skinned and gutted, at 4am in a Cairo supermarket.”

Anthony reckons there is still money for splurging on eating. “Obviously with the whole Covid thing, private cheffing gigs have taken a hit. We can only start moving around socially now. But most gigs I had booked have been postponed, not cancelled.”

“Chefs are fucking socially retarded to start with. We stand in front of stoves and don’t want to fucking talk to anyone. As a private chef you’ve got to talk to people, be in their personal spaces. You’ve got to play that game at not being too aloof, but also giving them what they want. And at dinner parties, give a bit of a story about the plate.

“Everyone loves a story, especially in that sort of situation. You’ve got to give them a bit of a show, essentially.”

It’s not that different to today’s chefs exiting the restaurant kitchen for the dining area to chat to their regular customers.

So Anthony is rolling up his sleeves for La Mouette’s kitchen. “The kitchen team is very competent. It’s more about training staff and getting them excited about cooking. La Mouette has a loyal customer base: a lot of people will eat here two or three times a month. We’ll open only for dinner and perhaps a Sunday lunch.” DM/TGIFood