The Chief Justice, the Bible and Palestinian real estate 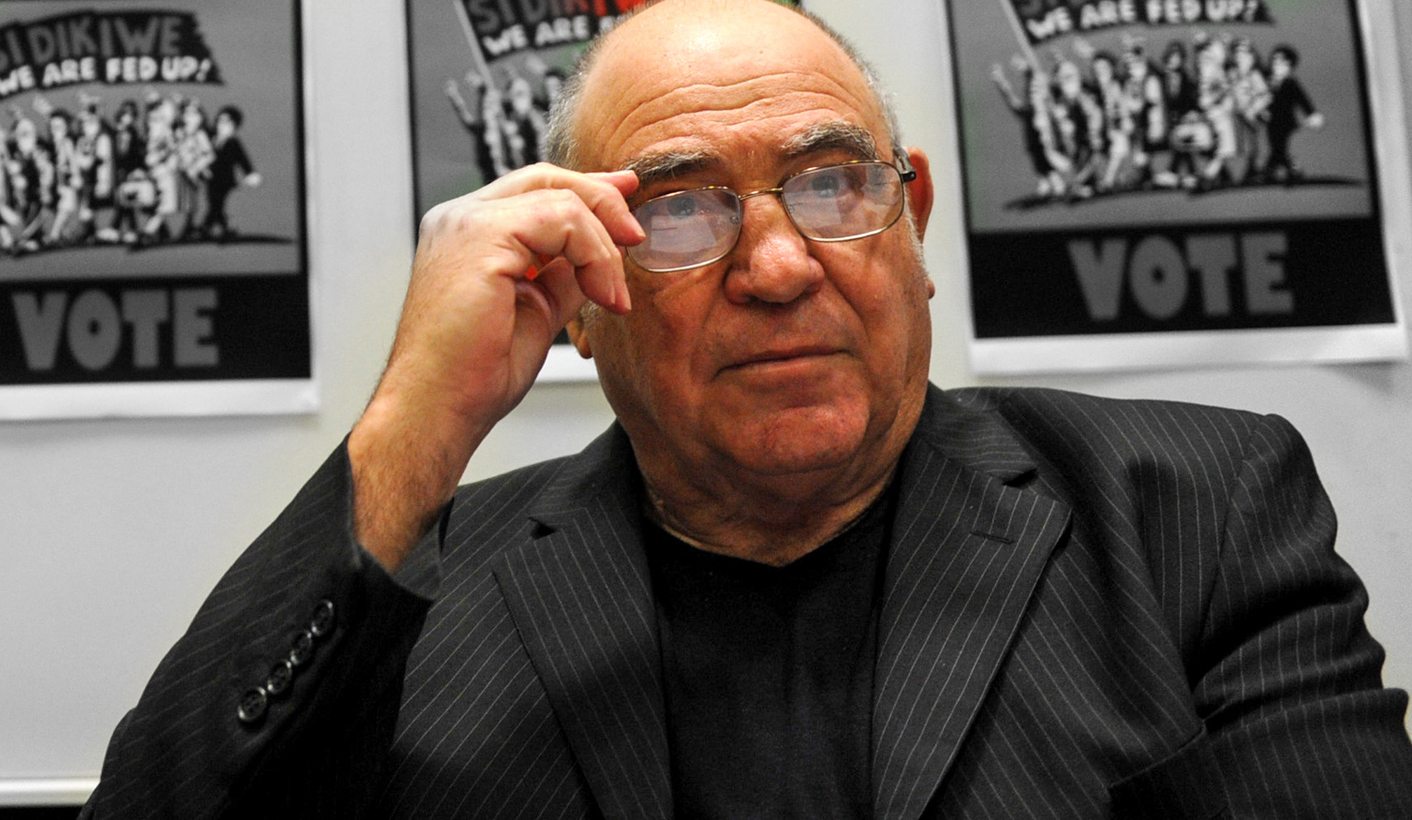 Chief Justice Mogoeng Mogoeng has committed a grave disservice to the universal principles of inclusivity our democratic country and Constitution is founded upon; but a disservice particularly to the Palestinian people.

“The whole land of Canaan… I will give to you as an everlasting possession to you and your dependents after you.”

It is claimed that God spoke those words to Abraham almost four millennia ago. Very convenient for 20th century Zionists whose founding fathers from Herzl to Ben Gurion were either agnostics or atheists from Europe whose ambitions and plans were to supplant through colonial settlement, the indigenous Palestinian people who had lived there for centuries.

“A Jewish state would be a protective wall for Europe against Asian barbarism” declared Herzl. “We will spirit the penniless Palestinians across the border” when the time comes, he averred. “What’s good for the Jews” stated Churchill, “is good for the British Empire.”

There were then, and to this day, other interests and claptrap motivating the land grab, culminating in Donald Trump’s “Deal of the Century’’ and annexation by Israel of a huge slice of what the Bible calls Samaria and Judaea. Those Zionist “non-believers” became quite adept at cynically manipulating the biblical narrative for their own ends. The Abrahamic prophecy continues to be debated by theologians, historians and politicians to this day with an unholy, racist alliance having developed between USA-based, anti-Semitic evangelicals and Zionism.

The latest self-serving episode has seen two South African Chiefs, our learned Justice of the Constitutional Court, Mogoeng Mogoeng, and the country’s orthodox Jewish religious leader, Rabbi Warren Goldstein, in cosy discourse for the Israeli-mouthpiece, the right-wing Jerusalem Post. From their ‘’learned dialogue’’, which has caused an uproar, it appears that neither gentleman has learned much from our liberation struggle or Freedom Charter, which begins with the inclusivist words, “South Africa belongs to all who live in it”.

If you choose to believe that real estate promise from on high, you really ought to present factual evidence other than the utterance of words by an invisible deity some 4,000 years ago. That is if you are making a highly contested case on behalf of one people over another as the learned Chiefs from South Africa have sought to do.

Reference to a land called Canaan is most intriguing. The Biblical Old Testament teaches that Moses en route to the Promised Land, despatched his spies into that territory to report on the terrain, the populous, agricultural production, the military power of the state etc. Hardly showing that the result was all going to depend on the will of Jehovah, the God of Israel. It is evident that even according to the biblical narrative there was no “land without a people” awaiting “a people without a land”, as modern Zionists claimed when speaking of Palestine in the 20th century.

The people we know as Palestinians today had lived in that land for centuries, tilling their fields, developing towns and trading centres, art and culture. This was a thriving populous, according to British census figures. There were 1,033,314 Palestinians in 1932 compared to 174,606 Jews. That minority had grown from a few thousand in 1882 when the Zionist project was launched from Europe [Edward Said: “The Question of Palestine.”] Owing to the increase of Jewish settlers in the wake of the Nazi Holocaust, the number jumped to half that of indigenous Palestinians by 1948. The increase was because the US, Britain and even South Africa accepted only a token number of Jewish refugees who preferred those destinations over a Zionist homeland.

That fateful year of the Nakba (“catastrophe’’ in Arabic )  saw over 700,000 Palestinians ethnically cleansed from the land of their birth; hundreds massacred and almost 500 ancestral villages destroyed –  the names removed from Israeli maps. [Illan Pappe: The Ethnic Cleansing of Palestine]. For those who are not prepared to accept claims based on a biblical narrative, history speaks. What do we know, from historical and archaeological research about this land of Canaan? I recall when I first visited the West Bank in 2004, as a government minister, being greeted by the mayor of Qalqilya, (almost entirely enclosed by Israel’s monstrous Apartheid Wall) with his proud words: “Welcome to our old Canaanite town.”

From 3000BC to 1000BC a Canaanite Kingdom covered historic Palestine and what is Israel, Lebanon and much of Syria and Jordan. By the time of Roman rule, the people were a potpourri of farmers, traders, artisans and townspeople, nomads, pagans, old Canaanite tribes – Hebrew, Persian, Samaritan, Arab, Greek and from the seventh century AD, converts to Islam. [Marcia Kunstel and Joseph Albright, “Their Promised Land”]. Many Jews had been expelled by the Romans in the 2nd century and prospered for centuries among the Arab people in neighbouring lands. An example of good neighbourliness destroyed by the rise of Zionist Israel.

Our chief justice ought to beware of mixing his faith with politics and choose his company more wisely. He has committed a grave disservice to the universal principles of inclusivity our democratic country and Constitution is founded upon, but a disservice particularly to the Palestinian people. He needs to prostrate himself before them and beg forgiveness.

The ancestral heritage of the present-day Palestinian people is the Canaanite “parent tree” which became Arabised by the 7th-century spread of Islam with the outcome that the melting pot of people “are now so completely Arabised that we cannot tell where the Canaanites leave off and the Arabs begin.”[Illene Beatty: “Arab and Jew in the Land of Canaan”] From intermarriage that took place over centuries it is more than likely that the many of the ancient Hebrews are a component of this racial mix. Apart from the biblical claims, historical research proves these facts, as do archaeological digs which attest not only to the Canaanite Middle Bronze Kingdom, but that the site of Jerusalem was a fortified Canaanite town in 1,800 BC. [Dr. Ronny Reich: “The Jewish Bulletin, 31 July 3 1998]

Despite frantic and sustained Israeli archaeological efforts, no evidence has been forthcoming of any comparable advanced Judaic civilisation in Jerusalem or the Holy Land as claimed existed in the mythical “Kingdom of Solomon and David” around 1000BC as descending from Abraham. There are no relics or historical record to show this existed, not even “simple pottery shards’’ nor “any sign of monumental architecture’’ [Finkelstein and Silberman’s ‘’The Bible Unearthed – Archaeology’s New Vision of Ancient Israel’’; Shlomo Sand: “The Invention of the Jewish People”; John Rose: The Myths of Zionism”].

Even Simon Schama, highly respected international scholar, himself a Zionist, has been forced to come to terms with some of the new research that undermines so much of the Zionist claptrap about the ancient world. Whatever the biblical belief system “how on earth can any sane human being recognise the ancient kingdom of David and Solomon as a model for the map of today’s Middle East?” Jostein Gaarder, Norwegian writer and one-time friend of Israel has stated.

Israel today, with all its power, and support of the US, Britain and to a lesser degree the EU, which glibly assume Israel’s right to exist, whether they use the Bible or realpolitik for justification, have given the Zionist state the impunity to unleash what Illan Pappe has termed “incremental genocide” of the Palestinian people. Our chief justice ignores the plight of the dispossessed Palestinians and bestows on Israel, as though he is the hand of God, the sole right to ownership of Jerusalem and the Holy Land.

Even if we ignore the volumes of historical research referred to and simply speak of Israel’s divine right to the real estate of the land once called Palestine, take heed of what the Jewish philosopher, Erich Fromm had to say as Israel manoeuvred to seize much of Palestine in 1948. He stated of Israel’s claim to exclusive ownership: “If all nations would suddenly claim territory in which their forefathers had lived two thousand years ago, the world would be a madhouse.”

The chief justice, who has a fundamentalist’s belief in everything biblical, should at least have the morally correct sense of accepting in today’s real world the rights of a people who have lived in the Holy Land for all those centuries  – Christians, Muslims and Bedouin nomads – not only the once upon a time dispersed Jews. He has come down on the side of a people given the right of return from any corner of Earth never having set foot in Israel. On the other hand, Palestinian refugees driven out of their homes in 1948 and 1967 by the barrel of a gun are denied such rights. Where is the chief justice’s sense of justice?

He has allowed himself to be played for a sucker by the chief rabbi, a fanatical Zionist who once declared to me that Israel had the right to the land wherever Abraham had left his footprints  – from Cyprus to the surrounds of Cairo, to Jordan, parts of Iraq and Syria along with the Lebanon. How generous Israel was, the learned rabbi told me, to only claim such a small percentage of all that territory. Our chief justice ought to beware of mixing his faith with politics and choose his company more wisely. He has committed a grave disservice to the universal principles of inclusivity our democratic country and Constitution is founded upon, but a disservice particularly to the Palestinian people. He needs to prostrate himself before them and beg forgiveness.

The current plight of the people of the Holy Land, where asymmetrical force and resources, injustice, state brutality and human suffering of the dispossessed abounds, forces us to confront ignorant biblical fundamentalism, a curse that undermines true faith and morality. DM