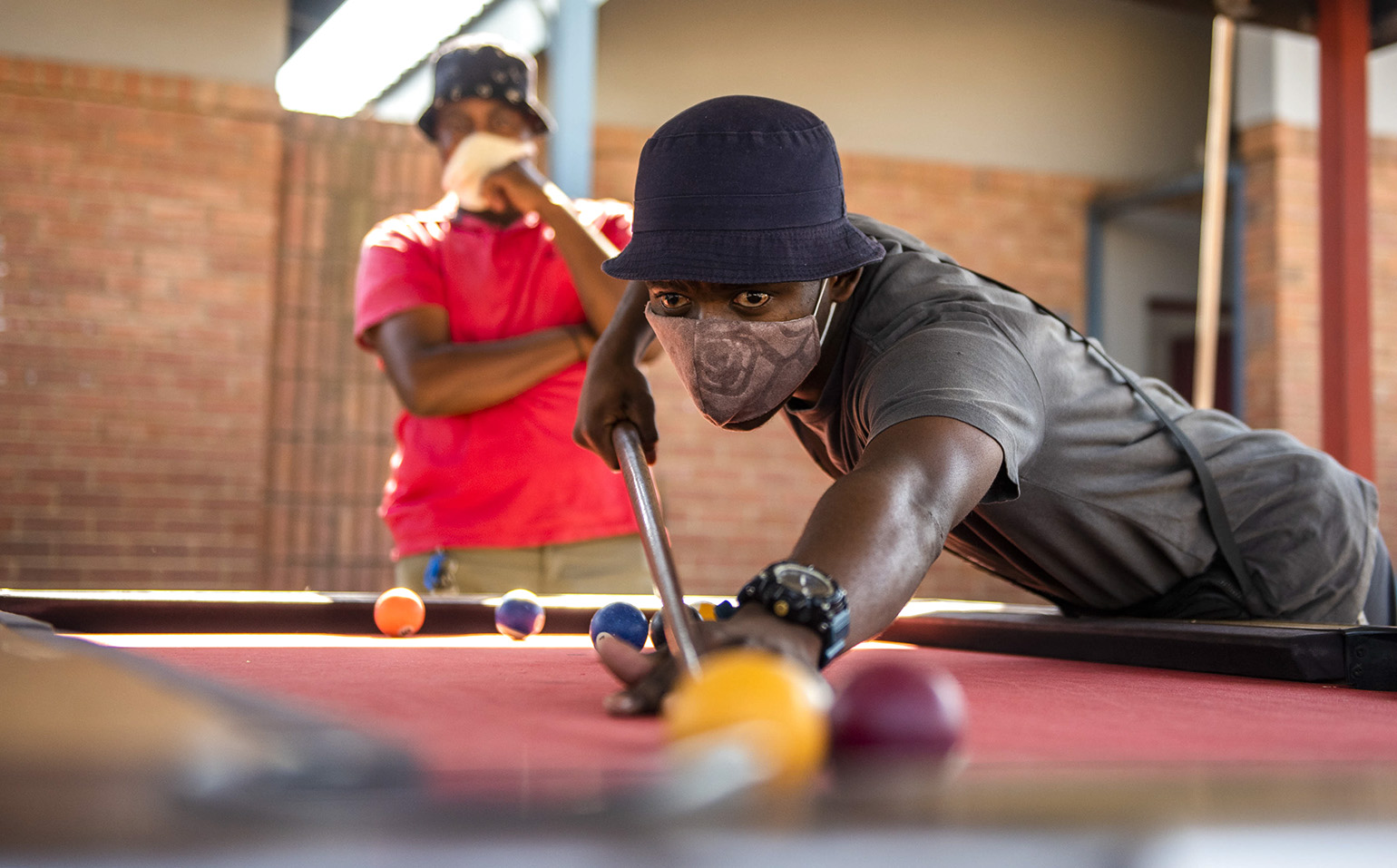 TSHWANE, SOUTH AFRICA - MAY 12: Gauteng Transport MEC Jacob Mamabolo and City of Tshwane Administrator Gilberto Martins visit the Mabopane Station Taxi Rank on May 12, 2020 in Tshwane, South Africa. The purpose of the visit was to inspect compliance to the COVID-19 lockdown regulations in terms of compulsory wearing of masks, sanitising the commuters, disinfecting the rank and monitoring physical distancing. (Photo: Alet Pretorius/Gallo Images via Getty Images)

When President Cyril Ramaphosa eased lockdown restrictions, his message was clear: individuals had to take responsibility for fighting Covid-19. But as the country hurtles towards its peak infection rate, the health system is at risk of being overwhelmed because people are flouting regulations and ignoring guidelines. As more and more people put their loved ones at risk, the government's ability to arrest the downward spiral is continually diminished.

The South African healthcare system is at risk of being overwhelmed as Covid-19 spreads rapidly, while adherence to regulations and physical distancing and hygiene guidelines has reduced since the economy reopened under Level 3 of the lockdown.

“The numbers are increasing because of our behavioural change problem,” Health Minister Zweli Mkhize told 702 on Tuesday.

“We are extremely concerned that fatigue seems to have set in and South Africans are letting down their guard at a time when the spread of infection is surging,” Mkhize said at the weekend.

“We see poor or no social distancing in communities. Masks are being abandoned or not worn properly and there is a laxity setting in around frequent hand-washing.”

Analysing data from Finmark Trust’s Covid-19 tracking survey of over 2,000 people, think tank Cenfri found that people started reducing their behavioural changes under Level 4 of the lockdown in May.

“Between the financial struggles (evidenced by a decline in financial health), the need to survive and the distress of the lockdown, people are possibly adjusting their risk-reward perceptions,” commented Cenfri’s engagement manager Alessandro Nava.

“As the government begins to ease lockdown, the ‘perceived’ message is that the crisis is easing too and, unless people have had direct experience with the virus, the strains of isolation and loss of income could result in them deciding that the perceived low-risk of catching the virus is worth it to have access to income and social contact again,” Nava continued.

Members of the South African National Taxi Council (Santaco) in Gauteng have started filling their taxis to capacity, in violation of the regulations that limit capacity to 70%. In a statement, Colleges of Medicine of South Africa CEO Professor Eric Buch said the role of public transport in spreading disease had been widely investigated and Santaco’s decision was dangerous.

Mkhize recently launched the Ministerial Advisory Committee on Social Behavioural Change, calling it “a transition from relying on enforcement to relying on the sheer goodwill and tenacity of South Africans to do what it takes to save lives and livelihoods”.

Committee chairperson Bishop Malusi Mpumlwana, general secretary of the South African Council of Churches, recently said there was “no compliance” in public with distancing and hygiene guidelines. He suggested the government should focus on building trust in its message and using communities to persuade and hold peers accountable.

Many people living in crowded areas, such as informal settlements and townships, have found it difficult to practice physical distancing. Where distancing at home is impossible “the motivation to be careful in public is significantly diminished”, said Smart.

“But there has been an increase in civil disobedience more generally, including wealthier South Africans. There is, I think, a widespread feeling that at least some of the regulations imposed on South Africans are inexplicable and/or irrational,” he added.

“When people start to question the rationality of public health interventions, they are far less likely to be adhered to, and this sadly extends to the more necessary social distancing measures.”

Smart agreed with the health minister that public fatigue has set in.

“Living like this is not sustainable indefinitely, partly for economic reasons, but mostly because ‘freedom’ is one of life’s most valuable commodities. There is a psychological need to exercise one’s freedoms that cannot be subdued indefinitely,” he said.

It’s human nature for more people to flout the regulations as they see others ignore guidelines.

“First, when others are out having fun we get jealous and want the same. Second, when there are no immediate consequences to those actions, we feel like we can get away with it, too. Third, if you are the only one social distancing, the entire system fails,” said Smart.

“Everyone needs to play their part if we are to flatten the curve and keep ICU beds available for patients in need. As things stand, there could very soon be no ICU beds, and no ventilators for those who need oxygen,” he added.

“It’s literally more important than ever to keep social distancing: wear masks, wash your hands, be particularly careful of the elderly, and stay away from other people as much as possible.”

Smart said the government should shift its focus to empowering people to control the spread of Covid-19, significantly increasing its distancing and hygiene messaging campaigns across media platforms “rather than the paternalistic approach the government has taken”. DM