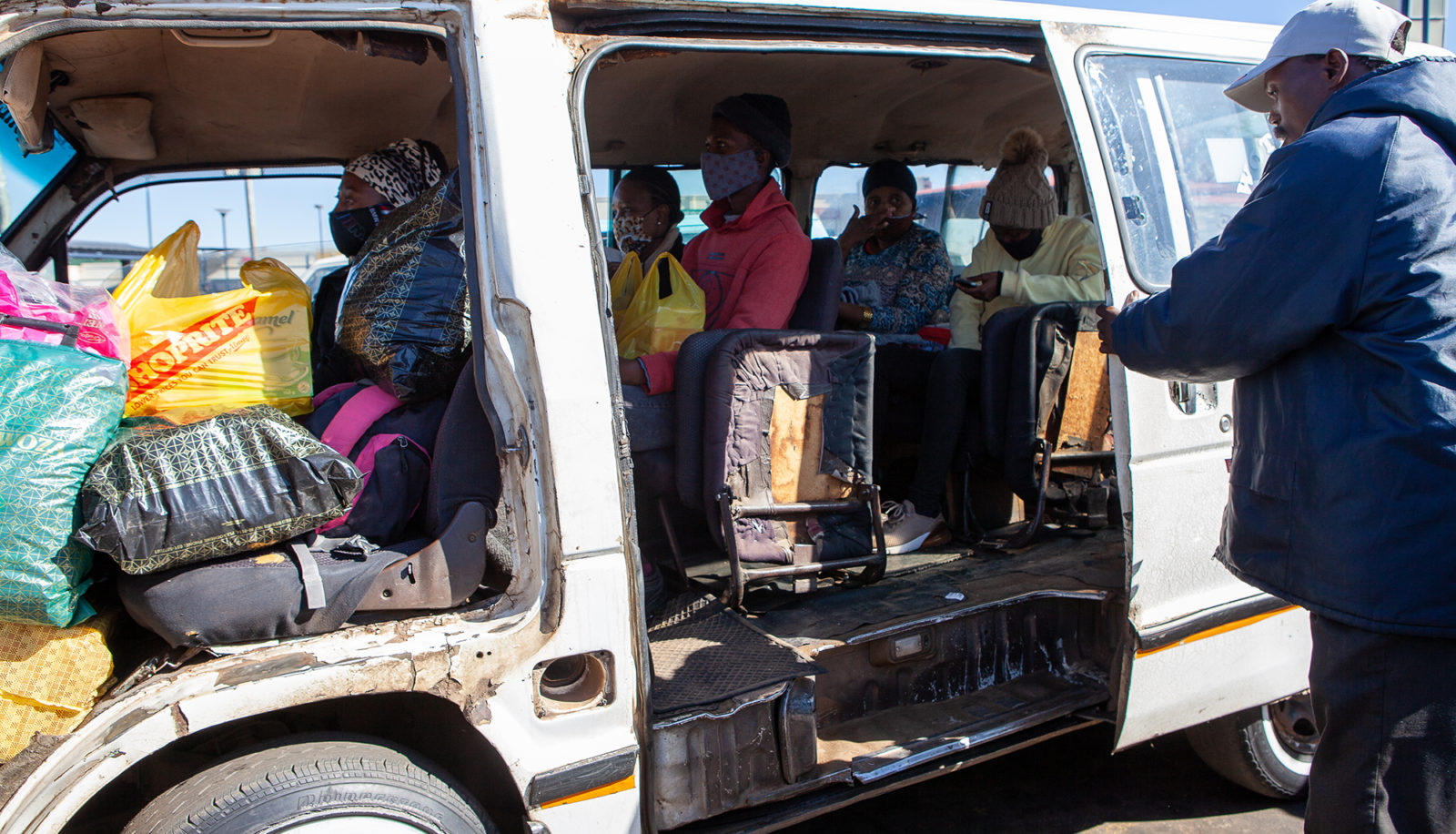 On Monday, the taxi association Santaco was loading passengers at 100% capacity in defiance of Level 3 regulations.

“I have no choice. I can either board the full taxi and risk contracting the coronavirus, or not do so and get fired from work if I don’t arrive on time. I would rather stick with the former situation.”

This was said by Leslie Baloyi, who commutes between Soweto and Johannesburg.

Baloyi’s comments came as many commuters grappled with the same dilemma.

This tough choice arose after the taxi industry announced that from Monday 29 June it would load passengers at 100% capacity and resume interprovincial travel with no travel permits for passengers.

The decision was taken by the South African National Taxi Council (Santaco). It came after the industry voiced its dissatisfaction at the amount of cash offered to the industry by Roads and Transport Minister Fikile Mbalula as Covid-19 relief. Mbalula offered the taxi industry just over R1.1-billion, which the industry rejected.

At some Soweto pickup points on Monday social distancing was not adhered to, and very few taxi marshals were seen using sanitisers.

In a statement issued by Mbalula on Sunday, he assured the sector that he would get back to them with an update once the matters had been canvassed within the government.

“It is rather unfortunate and regrettable that the taxi industry leadership has elected to violate the law and forcefully load taxis at 100% capacity and undertake interprovincial operations without the requisite permits, rather than await a decision on the matters they have tabled,” he said.

Addressing the issue on Monday, Mbalula said Santaco’s actions amounted to putting a gun to the government’s head.

“Government has always been willing to review lockdown regulations, even on Level 3. And now you are putting a gun on government’s head. Do I want law enforcement to clamp down on the taxi industry? No. Can the taxi industry promote anarchy and bring the country to a standstill? Yes, they can. Can the law be exerted and the authority of the state? Yes.

“I appeal to the leadership structures of the industry to reconsider their decision to incite lawlessness and place their drivers and passengers on a collision course with law enforcement authorities.” – Fikile Mbalula.

“There will be a collision. Over what? Over something that we can resolve. That is absolutely unnecessary. Collision over what? Over 100% loading capacity, over interprovincial travel?” Mbalula said.

However, a collision wasn’t far off, as according to information on social media on Monday, police in Mpumalanga clashed with taxi drivers who were blocking the entrance to the Moulanganga township of Kanyamazane.

Newsroom Africa journalist Mweli Masilela was apparently injured after he was shot with rubber bullets during a confrontation between police and taxi operators.

The South African National Editors’ Forum (Sanef) condemned the shooting of journalists while doing their work.

“Masilela was shot and injured when police fired rubber bullets just a few minutes after arriving in the area to disperse the protesters. There was a standoff between the police and taxi operators from the early hours of the morning over the taxi operators’ demand to carry passenger loads of a hundred percent,” Sanef said on Monday.

“We can’t talk past each other. There is no war here. There is no need to fight, we need to talk,” Mbalula said in a virtual briefing on Monday while addressing aviation matters.

“I appeal to the leadership structures of the industry to reconsider their decision to incite lawlessness and place their drivers and passengers on a collision course with law enforcement authorities.

Later on Monday, Mbalula had another meeting with Santaco, which Santaco spokesperson Thabiso Molelekwa described as cordial. Speaking to eNCA, Molelekwa said:

“It was quite a cordial meeting. We made our considerations. We did indicate our conditions that we are not willing to back off on. And, the minister indicated that he agrees in principle, but that we afford him the opportunity to engage with the Command Council. His indication was that he did not see any opposition from the Command Council.”

Molelekwa said Santaco leaders would meet late on Monday to consider the outcomes of the meeting with the minister.

He said Mbalula had asked them to consider certain decisions that they had taken. Molelekwa said Santaco was willing to work with the government, and that each understood the other’s frustrations. Molelekwa said the association would make an announcement late on Monday or on Tuesday morning.

South Africa’s taxi sector remains largely informal, with the government struggling to formalise the industry despite numerous engagements aimed at achieving this. This has meant that wayward behaviour thrives in the taxi sector as it makes and follows its own rules. There is no empathy for customers: even in these hard times, associations such as the Dobsonville Leratong Johannesburg Taxi Association are hiking fares. The fare hikes range from R2 and R4.

Molelekwa suggested that Santaco’s announcement late on Monday or Tuesday morning might see an end to the current stand-off between the taxi association and government. Most of the association’s taxis in Gauteng and KZN ran on full capacity, defying lockdown regulations. DM