Villagers forced to scrape the earth for water

Villagers forced to scrape the earth for water 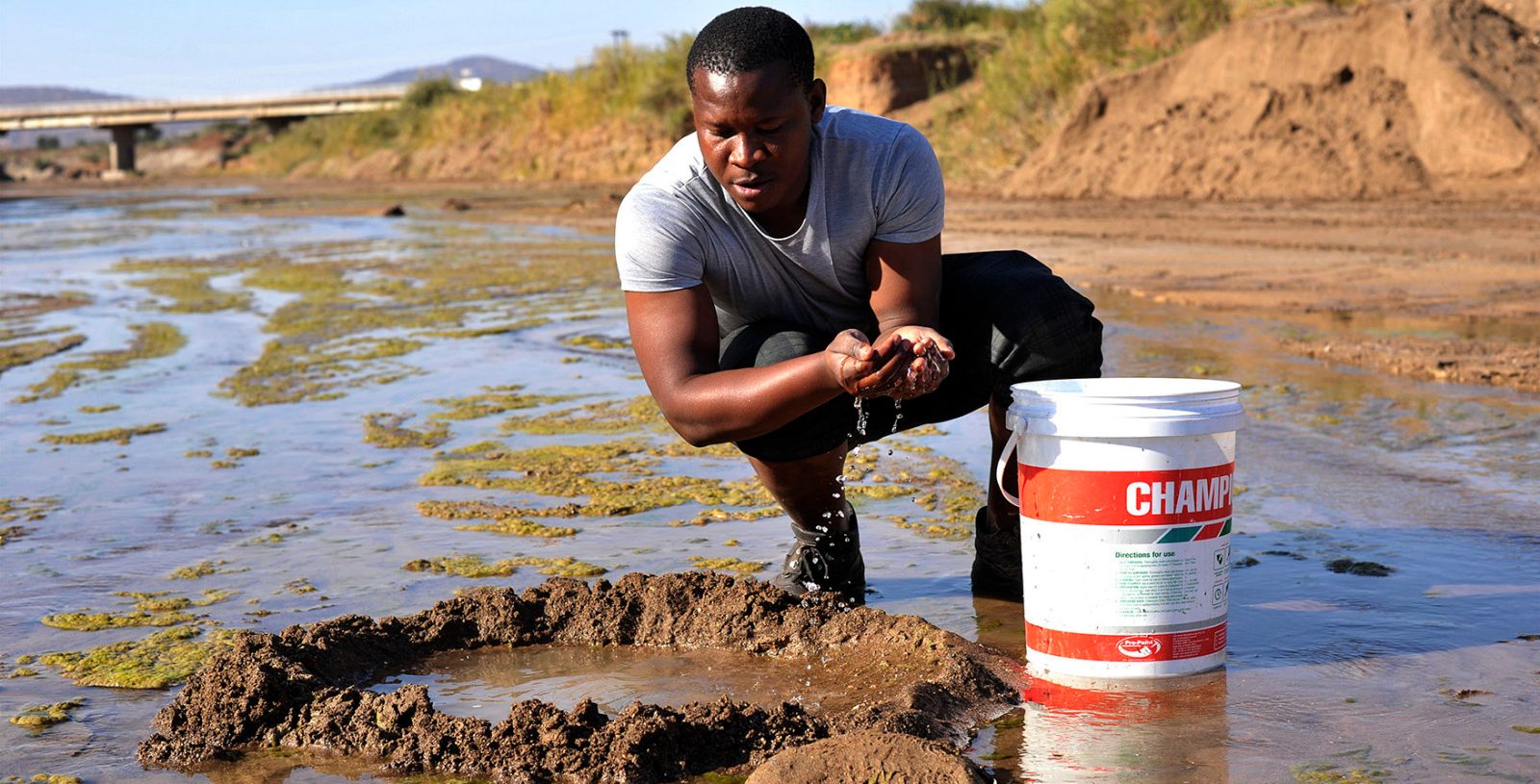 Mokopu Maidi says the struggle for water is consuming a lot of time for youngsters who are trying to find ways to survive in tough economic times. ( Photo: Lucas Ledwaba/Mukurukuru Media)

A Limpopo municipality’s indifference to water supply has left desperate residents with no choice but to resort to ancient ways to access the precious resource.

Mokopu Maishi sinks his hands into the damp river bed next to where green algae has formed underneath a flowing trickle of water. He carefully scoops out a mound of sand and builds a wall around the little dam about half a metre in circumference. And then he waits, and waits, and waits for the little dam to fill up.

When the water reaches the level of the wall made from the soft mounds of soil, he kneels and carefully scoops it into a bucket. This is how his parents, his grandparents and those who came before him used to collect water from the Motse river that meanders past Sekutlong. Although times have changed,

The village is located at the foot of a mountain in Moroke in the Fetakgomo Tubatse local municipality in Limpopo.

“We don’t know whether to fear corona or cholera because we drink water from the river. It’s dirty. It takes a lot of time to gather,” Maishi said in the late afternoon sunlight casting long shadows on the village.

Filling up a 20-litre bucket in this way can take the better part of an hour. To fill up one of those blue 210-litre drums which every household keeps in numbers on their properties, requires at least 12 buckets.

The labour of collecting water every day leaves very little time for anything else — it’s a way of life. Sekutlong is on Limpopo’s lucrative platinum belt which is home to more than two dozen platinum and chrome group metals that oil the provincial economy.

It’s in the proximity of platinum group metal mines, including the Hackney and Twickenham mines owned by Anglo American Platinum. Residents suspect the water from the Motse river is contaminated because it courses through the Hackney mine. But they have no other choice.

The Fetakgomo Tubatse local municipality invested and lost more than R245-million in the VBS Mutual Bank in 2017. Its then mayor, Johannes Phokane, was forced to resign in December 2018 as the ANC fired seven mayors whose municipalities had invested public funds in the now defunct bank.

Residents of Sekutlong say the taps installed on their properties by the municipalities more than two years ago have never produced a drop of water. They are serviced by a municipal water tanker. However, they say this truck comes only once a month.

The dire shortage of water has forced residents to draw water from an irrigation canal running parallel to the Motse river. The canal was built during the Lebowa homeland administration pre-1994 to cater for subsistence farmers planting crops on the banks of the river.

Now the canal serves as a source of drinking water for man, donkey, goat and cow. University student Thato Phahlane sits on an empty bucket next to the canal. He has spent the entire day, since morning, drawing water from the canal to fill up tanks back home in the village.

“The water is dirty. It’s not what you can use to cook with. You can use it to water plants or wash clothes,” says Phahlane, who has lost count of the number of buckets he has filled up that day.

“We are always here. This is where we have fun,” he says, explaining that the ferrying of water leaves no time for anything else.

Because of the poor quality of the water, residents boil it on wood fires before using it for consumption.

“The water is not only used for drinking. Baptisms are performed upstream in the river. We plead with our municipality to pump clean water for us. There are boreholes that were drilled years ago. When I was born, these structures were already in existence. I’m 27 years old now. This means that for 27 years our parents have been complaining about water,” says Thabiso Bošego, who prefers the old method of siphoning water from the river bank.

Alfred Malepe is washing a bucket with water from the canal before he draws water to take home to use for cooking. The pensioner doesn’t remember a time when the village had access to a regular supply of clean drinking water. He remembers how as a little boy, he too accompanied the elders down the river to draw water and when its flow was reduced to a trickle during the winter months, they too would dig holes in its bed and wait.

“I never thought people would still be living like this during this time,” he says.

Businessman Abednigo Nkoana says the chronic shortage of water has forced the family to spend money they hardly have on buying water to fill up a 2,000-litre tank, but the water is never enough for the household of eight people. The water is delivered by entrepreneurs who have found a lucrative way of making a living from the suffering.

“We buy (fill) a 2500 litre tank for R300. The water doesn’t last through the month. We have to replenish around the 2oth of the month,” says Nkoana, whose catering and food business has come to a standstill since the Covid-19 lockdown was enforced in March.

In April 2020, President Cyril Ramaphosa announced that municipalities would be allocated R20-billion as part of Covid-19 relief measures to help with issues including provision of clean drinking water to communities. But Sekutlong residents say they have not seen any changes despite this announcement by Ramaphosa.

Municipal spokesman Moloko Moloto tells a different story. He says the area does have reticulation infrastructure in place and the community has been getting water pumped on a rotational basis with the community of Moroke B. Moloto says the water is pumped to Moroke B for two days and then to Sekutlong for two days.

Moloto says the solution is to disconnect the illegal connections.

“So we don’t have storage in which we pump water. That’s why we are pumping into the reticulation systems and the reason we don’t have steel water tanks or reservoirs is we don’t have funding. The people did not have a problem with us pumping water,” he says.

But resident and community activist Tokelo Mahlakoana says it is not true that they have been receiving water.

“If we have been receiving water then the meters on the taps would reflect that. We have never had any water. We have contacted the municipality so many times. They always tell us they know about our problem, but they do nothing,” says Mahlakoana.

She says the water tanker has not been to the village in almost two months and she has been informed by staff that they would not be delivering water to the area because they are now under even more pressure to provide water to schools since they reopened.

Maishi says: “We plead with whoever is listening to come to our aid. This situation is no longer bearable. A tank of water put down the road would make accessing water much better.”— Mukurukuru Media. DM/MC