War Party: A fearless account of KZN ANC predatory elite’s use of violence and assassinations 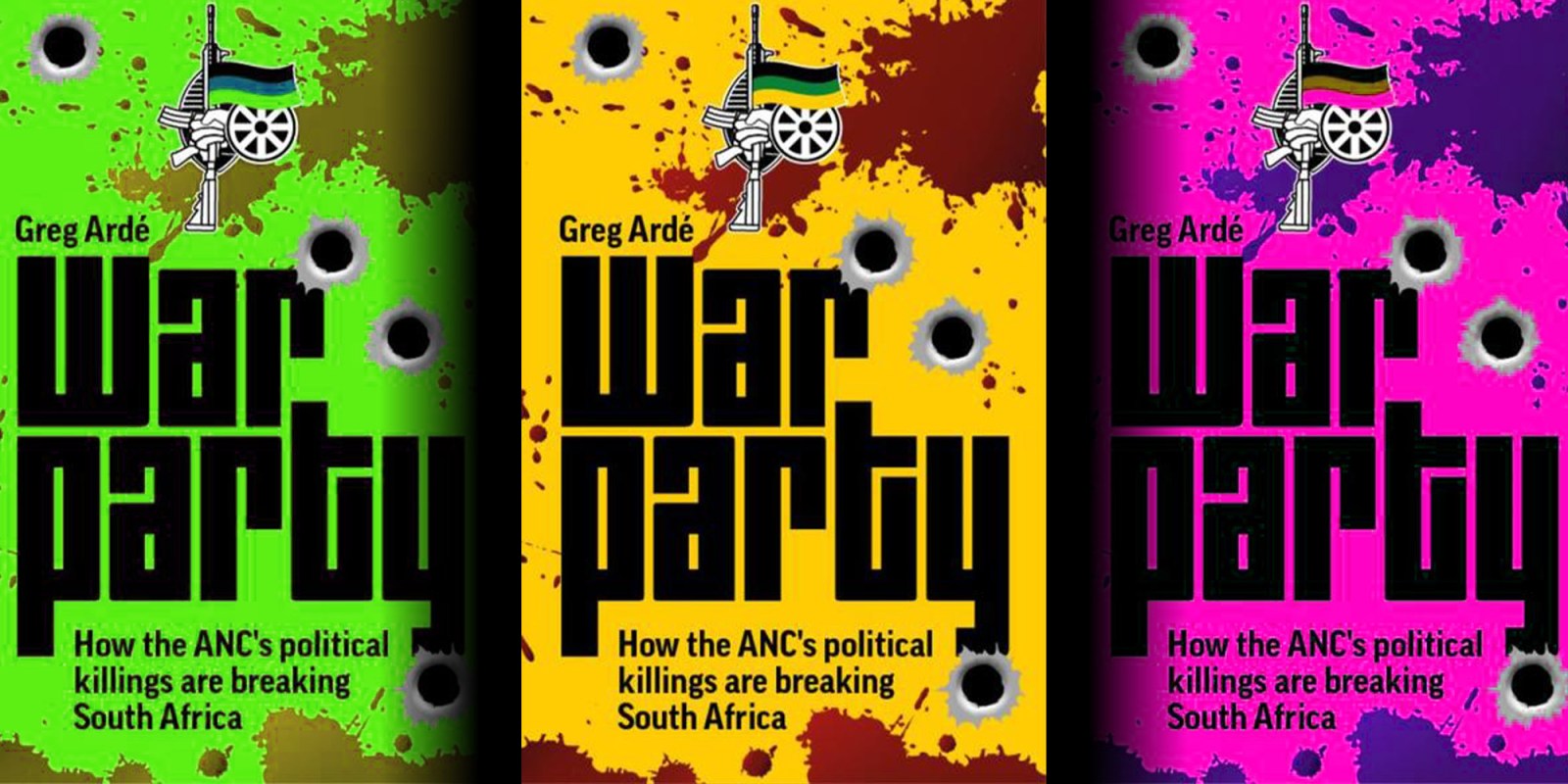 KwaZulu-Natal has a long history of political violence, violence that has continued post-1994. In a new book published by Tafelberg, Greg Ardé unpacks how individuals and factions within the ANC, fighting not over ideology, but over money and power, are feeding a deadly snake-pit of violence and assassinations.

Veteran Durban journalist Greg Ardé has written an explosive new book on the intersection of criminal networks, politicians and the police in KwaZulu-Natal (KZN). It is vital reading for anyone who wants to really understand the ANC, why things went so wrong, so fast during Jacob Zuma’s years as president and why small towns across KwaZulu-Natal are collapsing.

Political assassinations have happened in Mpumalanga and have recently become a regular event in Port Elizabeth too. But there is no doubt that KwaZulu-Natal is where the problem is at its worst. In a 2013 paper, David Bruce, a highly respected researcher, counted around 450 political killings in KZN since 1994. The problem escalated dramatically during Zuma’s years in office.

Ardé’s book notes the history of violence in the province in the late 1980s and early 1990s between Inkatha, as it was then, and the United Democratic Front (UDF). The civil war that raged through those years was an ideological contestation between the conservative, authoritarian, pro-apartheid form of Zulu nationalism led by Inkatha, and the left wing, democratic, modernising and anti-apartheid forces led by the UDF.

The book then goes on to show that the bulk of the violence after 1994 has not had an ideological form. In most cases, assassinations are a result of contestation for political positions and tenders. The majority of political murders are a result of contestation between individuals and factions within the ANC. In these murders, what is at stake is money and power, not ideology.

Ardé shows that there are exceptions to this. The South African Communist Party (SACP) and Abahlali baseMjondolo, the shack dwellers’ movement that has more than 75,000 paid-up members in Durban, have also had their leaders assassinated.

But in the majority of cases, assassinations are a result of the take-over of the ANC by criminal networks, often linked to the taxi industry.

One of the striking elements of this book is that, again and again, Ardé shows that people involved in assassinations have been protected, and given jobs, by powerful political figures.

Arde’s book is not an attempt to give a statistical overview of the problem aimed at generating a numerical record of assassinations. Instead, he uses a few case studies in short, excellently written chapters, to give a sense of how assassinations happen, and how the people who actually pull the trigger are protected and given jobs. He shows that politicians, the taxi industry and the police have become enmeshed in a criminal take-over of the local state, which allows a small and violent elite to accumulate wealth at the direct expense of ordinary people.

Ardé also makes the point, previously noted by some journalists and academics, that it was the late John Mchunu, the former chairperson of the ANC in the eThekwini region, who organised the forces that secured Zuma’s bid for the presidency of the ANC in Polokwane in 2007. The eThekwini Municipality was the primary political base for the Zuma faction and so, as others have written, there was a sense in which the country was in fact run from Durban during the Zuma years.

This was never understood by most analysts, and most analysts in Johannesburg or Cape Town still have little appreciation of just how violent and corrupt politics is in KZN.

Most journalists have been too nervous to write about the taxi bosses who have become such powerful political brokers in Durban. Their names are often spoken in hushed tones in private, but seldom discussed in public. Ardé is fearless. He names names, gives short biographies and shows how the enmeshment of organised crime with politics, and policing has made some people untouchable.

One of the striking elements of this book is that, again and again, Ardé shows that people involved in assassinations have been protected, and given jobs, by powerful political figures. One gets a clear understanding that the rot is systemic. Ardé is also unafraid to address the matter of former eThekwini mayor Zandile Gumede, who was described as a “gangster Mayor” by grassroots activists.

S’bu and Shawn Mpisane, who became massively wealthy off the eThekwini Municipality’s housing programme, get a mention in this book, but their role in the ANC is not given a serious look. This is a pity because they were clearly important figures in the nexus between business and politics during the Zuma years, and like other figures that Ardé looks at in this book, had an aura of untouchability about them.

Ardé does an excellent job of using a number of case studies to show his readers how politics and violence really work in KwaZulu-Natal, but he does not address how the Zuma project aimed to develop an ideology to legitimise the politics of a predatory elite. At the national level, this took the form of the Bell Pottinger scripted rhetoric of “radical economic transformation” and the conscripting of deeply compromised figures like Carl Niehaus to be propagandists for Zuma.

Ardé has not given us a definitive account of the problem of political violence. Each of his elegant and brief chapters could easily be developed into a book. But he has given us the first book-length account of a serious problem and one that gives the reader a real sense of how politics actually works in KwaZulu-Natal.

This history is reasonably well known, although there still needs to be work done on claims that the intelligence services supported this project by attacking Zuma’s critics, and running agents in the student movement, NGOs and elsewhere.

In Durban, celebrities and religious figures were also brought in to create a sense of a prosperity cult around Zuma, and his allies. The Mpisanes were an important part of this. This history still needs to be written.

Fixing the mess in KwaZulu-Natal will not be easy. In many cases, local politicians and police officers are part of the problem, and will not be able to be part of any solution. Ardé shows that while the Moerane Commission, which investigated political killings in 2017, welcomed evidence from all quarters and produced a voluminous report, that report made no difference at all.

The report was released by provincial Premier Willies Mchunu in late 2018. Mchunu himself has been fingered by Abahlali baseMjondolo as having made statements that indicate support for political violence, and intolerance. If the person who releases a report on political violence is not, themselves, seen to be beyond political reproach on that question, it is difficult to see possibilities for progress.

At the level of policing, it seems clear that there will not be any real progress made unless officers are brought in from outside the province, and insulated from the pressures and inducements of local elites. At the political level, it is less clear how to address the crisis.

Ardé shows that there are individual figures who are credible actors, but he also shows that the rot is systemic. However, Gumede was removed as the eThekwini mayor and so while wholesale reforms seem unlikely, progress is possible.

Ardé has not given us a definitive account of the problem of political violence. Each of his elegant and brief chapters could easily be developed into a book. But he has given us the first book-length account of a serious problem and one that gives the reader a real sense of how politics actually works in KwaZulu-Natal.

This is a well-written and important book that is required reading. Hopefully, it will spark a serious national conversation about a very serious threat to our democracy. DM

Imraan Buccus is senior research associate at ASRI, research fellow in the School of Social Sciences at UKZN and academic director of a university study abroad programme on political transformation. War Party is published by Tafelberg.