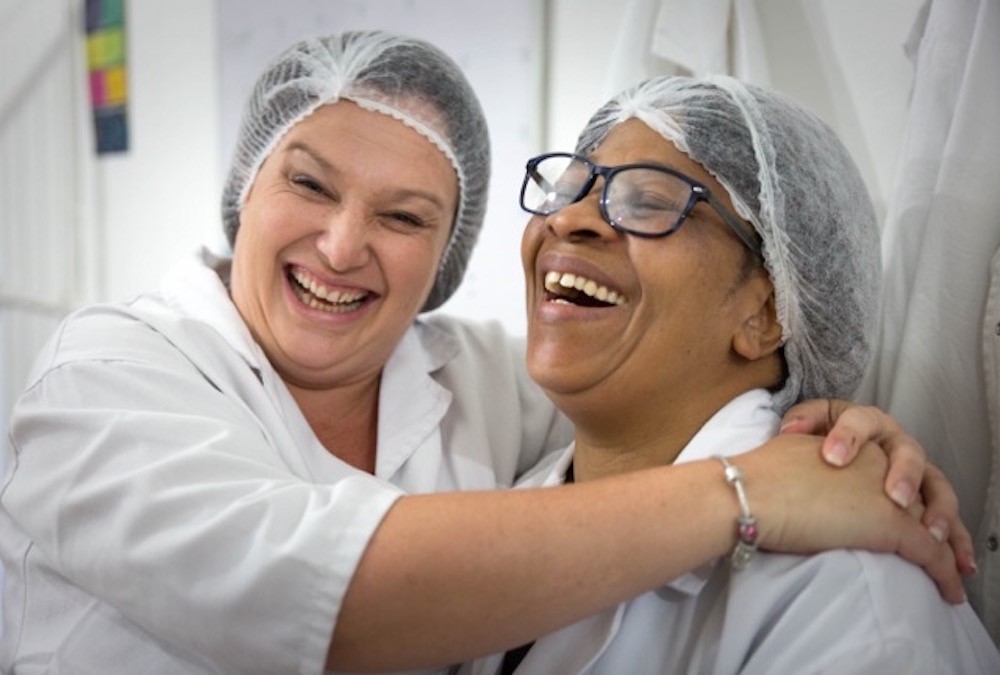 Imagine you’re a food manufacturer who wants to get their products on the supermarket shelves. These are the stories of people who did just that. In this chapter, we meet Adri Williams who is part of empowering the workers at Khayelitsha Cookies, one bite at a time.

Normally the story of a cookie brand is a happy one involving deliciousness and sprinkles of happiness. In this instance the narrative follows the plot of a thriller movie including a few natural disasters. Read on as Adri details exactly how this story resembles a blockbuster.

The beginnings of this retail adventure started low-key when Adri was still working in corporate and was involved in outreach at the Khayelitsha Day Hospital every second Saturday. With a ratio of 10 nurses for about 70 children, the infants got very little human contact; the only time they were touched was when they were fed or changed. The volunteers helped the babies to crawl and improve their fine motor skills. That was when Adri met Noluthando, a three-week-old premature baby whose mother had TB. Nurses say that if the child didn’t drink at least 15ml of milk daily she was going to get sick and moved to tube feeding. “It took two hours to get the milk in. I’ve never cried like I cried over that girl in that time, it showed me in real time what the effects of malnutrition were.”

Shortly after that encounter, Adri resigned from her job and went for an interview at Khayelitsha Cookies, determined to make a real difference. The business had been started by American Alicia Polak during her MBA in South Africa when she began training women in how to make American-style cookies by hand. When she had to go back to America because her dad fell ill, Polak sold the business to directors Tim Leher and Tom Fehrsen, who decided to run it as a social development project to give back to the community. Polak now lives in San Francisco, where she is involved in social entrepreneurship and lectures on it at The Wharton School at the University of Pennsylvania.

When Adri arrived in 2007, the facility had four women, three tables, four little ovens and a single mixer. She immediately had a rapport with Eunice Nyobole and they promised each other to do everything to make the enterprise work. By 2013 the company had accumulated R2.5-million in debt and the directors wanted to shut down operations. Adri bought the company for R1, made an arrangement with the former directors for 10 years of an interest-free loan to repay the accumulated debt, and brought Eunice on board as a co-owner. Together they vowed to keep the company going, a thankless task with assets worth just R100,000. “In effect I paid a Ferrari’s price for a very broken Golf.” She laughs raucously.

Even with all the good intentions there were still some real obstacles. First, because of the debt they did not qualify for any form of finance, so seven years down the line Khayelitsha Cookies has to operate the business on a day-to-day cash principle. Additionally, producing handmade cookies made it impossible to compete with more industrialised companies when it came to pricing or volume. Market research further proved that even the company name was a liability.

“People had a very negative connotation to Khayelitsha because they associated it with informal settlements, so people immediately wondered if this product was safe for consumption; did it comply with safety regulations? The Khayelitsha Cookies brand came with its own set of challenges.” This led to a rebrand with new packaging and the name You Cookies to present a more neutral brand to the public.

Any decent movie demands that the hero encounter some adversity to test their mettle. In 2017 the Western Cape was hit by a strain of Avian Flu that led to a shortage of eggs due to the culling of more than two million chickens. Adri switched to quail eggs and kept production going. Then the next year they had a fundraiser to move to new premises that would increase their productivity by 30%.

Upon first inspecting the premises it was noticed that there was water running down the wall where the ovens were supposed to be installed. After a lot of back and forth between the landlord and the builder, both were adamant that all was fine and it was the result of previous water damage, so they moved in and installed the equipment. With the first heavy rains of winter, disaster struck.

“The 26th of April is a date I will never forget. The whole factory flooded from the roof downwards. We lost seven of our ovens, the PC boards blew up and the distribution boards blew up. Initially, insurance refused to pay up, but eventually they did the right thing.”

While all this was going on the business grew slowly and found a niche by supplying to the hospitality industry which eventually allowed it to break even.

Adri decided it was time to branch into retail and Khayelitsha Cookies finally landed on shelves at Pick n Pay.

Just as the company was getting back on its feet, in March 2020, the shutdown happened, and the hospitality industry which made up 65% of their clientele was no longer in business.

“It was a serious blow happening in the first month the company had been able to get all our invoices into the 60-day repayment window.”

Fortunately, Clicks, who they had already sold the product to under their own brand name, allowed them to sell the Khayelitsha Cookie brand at till points for the next several months. At the same time, Purity is currently developing a range that includes the vegetables and fruit the company is growing on site.

It sounds like this is a story with a happy ending so I ask Adri if there is a sequel. She tells me the glorious tale of a farm on the N7 highway where the price of a farm they wanted to purchase dropped from R10-million to R4-million. They plan to use the farm to continue job creation through a combined aquaponics and hydroponics system that uses 98% less water and electricity. The farm has water reserves and already has tilapia fish in tanks as well as irrigation set up.

Now Khayelitsha Cookies wants to enter the American market with the new offering of cookies that contain the various organic vegetables and fruit they grow.

Says Adri: “I never give up on dreams and the future.” DM/TGIFood