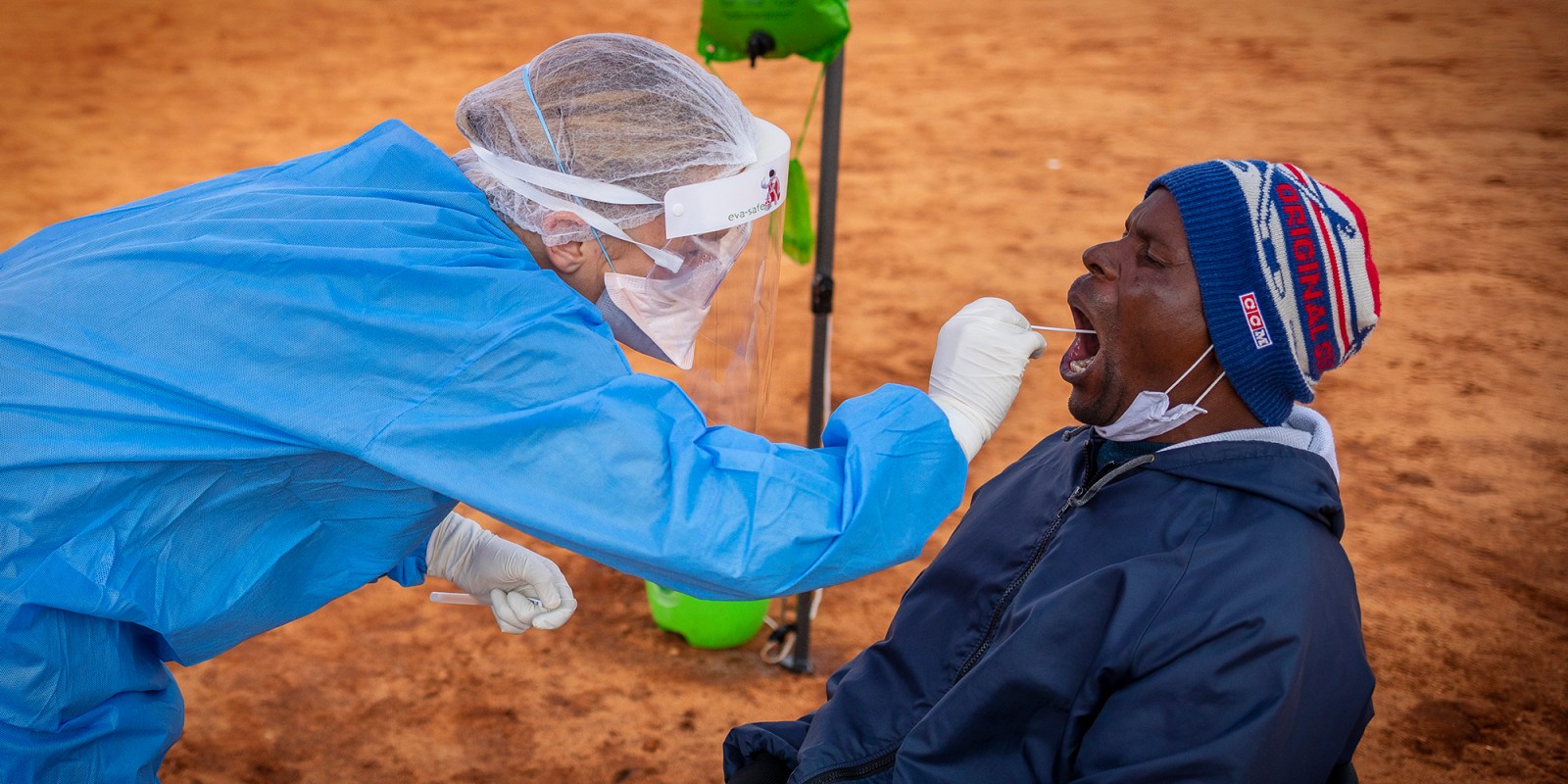 A man is tested by a healthcare worker during a local government mass testing campaign in Alexandra, Johannesburg. (Photo: EPA-EFE / Kim Ludbrook)

With the rising numbers of confirmed Covid-19 cases across SA, the National Council of Provinces heard how five provinces are tackling testing and screening. Overall, it emerged that a stumbling block was the reluctance of people to stay in quarantine facilities.

As South Africa hits the 106,000 mark of confirmed cases of Covid-19, representatives from KwaZulu-Natal, Northern Cape, Western Cape, North West and Limpopo reported to the National Council of Provinces about their Covid-19 strategies on Tuesday morning, 23 June 2020.

The national deputy minister of health, Joe Phaahla, said that one of the biggest challenges facing health workers was that those who tested positive for Covid-19 or were waiting for their results were reluctant to stay in quarantine facilities.

“Many contacts and those who have tested positive, especially in the Western Cape, are reluctant to go into quarantine sites. Even those who don’t have space to quarantine in their homes aren’t taking up quarantine facilities,” said Phaahla.

According to Phaahla, 15-20% of those who’ve tested positive for Covid-19 across the country have agreed to stay in quarantine facilities.

“Our ability to fight this won’t depend on doctors, but on our ability to persuade citizens to quarantine at home or in quarantine facilities,” Phaahla told the committee.

MECs of health and representatives from provinces presented for 10 minutes on how their provinces were doing in terms of screening and testing for Covid-19 in a plenary debate with the National Council of Provinces (NCOP). Speakers from the ANC, EFF and Inkatha Freedom Party had less than 10 minutes to speak. Their comments ranged from how well the Department Of Cooperative Governance and Traditional Affairs (Cogta) has been handling the lockdown, to DA members criticising the lockdown. No questions were directed to the MECs of health and other representatives on their Covid-19 strategies.

Limpopo is one of the few provinces recording less than 1,000 cases. So far, its tally is 582 confirmed cases. Of these, 257 people have recovered and 325 are active cases. Five people [who’ve tested positive for Covid-19] are in isolation wards, which include a two-month-old baby and a 65-year-old with comorbidities, said Phophi Ramathuba, the MEC for health in Limpopo.

Early in May 2020, Limpopo Premier Stanley Mathabatha took advantage of the lockdown Level 5 by preparing for the surge, said Ramathuba. A surge plan was launched to deal with the virus on a community level.

The surge plan involves deploying 10,000 volunteers to screen 1.6 million households in the province, with 100 doctors working closely with 1,000 nurses in communities. “Professional nurses will be assigned to community healthcare workers to support them. They are all being provided with equipment to also test blood pressure, TB and malaria,” said Ramathuba.

Another province with less than 1,000 confirmed Covid-19 cases is the largest province with the smallest population, Northern Cape. The number of confirmed cases in the province was 254 as of 22 June 2020.

The MEC for health, Mase Manopole, said that “there are notions that we aren’t doing enough testing, that is simply not true”.

The Northern Cape has about 1.2 million people living in the province.

“The fact is the small population size in the province makes it relatively manageable. For example, four weeks ago, one of our potential hotspots had an incident of 150 cases per 1,000 people, our swift response means that we have an incident rate of 0 new cases for the past two weeks,” said Manopole.

In the North West province, Madoda Sambatha, the province’s MEC for health, says that infections have gone up since mines reopened.

“62.2% of the [Covid-19] confirmed cases are in the Bojanala district and 29% are in the Kenneth Kaunda district. Added with Covid-19, these two districts are where HIV and TB are prevalent. These are predominately mining districts,” said Sambatha.

Currently, the North West province has 2,315 confirmed cases and 248 recoveries.

“[Prior to mines operating at full capacity] we had under 400 cases [and then] after 4 June, there was a surge in infection as mineworkers were going back to work,” said Sambatha.

Sambatha says that this was because mineworkers had left the province when Level 5 was enforced in March 2020.

Sambatha also attributed the rise in infections due to mineworkers living in different communities. “Mineworkers don’t reside in hostels, the majority of them reside in communities. The department of health and the department of mineral resources need to strengthen their relationship to effectively do contact tracing,” Sambatha told the committee.

Sambatha applauded Nkosazana Dlamini Zuma for her role as the minister of Cogta. “The Minister of Cogta and the National Command Council have done well up to this far. All we have to do is to consistently engage with the community with their role [in adhering to safety precautions],” said Sambatha.

The province with the fourth-highest confirmed cases – currently at 5,278 – is KwaZulu-Natal (KZN). Cogta MEC Siphosihle Hlomuka reassured committee members that KZN was doing its best to provide service delivery. “Even though there is a lockdown, there isn’t a lockdown on service delivery,” said Hlomuka.

“We have instructed all departments to ensure that basic services like healthcare and the provision of water and electricity continue as before,” Hlomuka told the committee.

Hlomuka also told the committee that the province has been doing “a sterling job” with contact tracing, but did not give details.

“The Western Cape has adopted a whole government approach because it isn’t useful for departments to work in silos,” said Mireille Wenger, the DA’s chief whip in the provincial legislature.

“We developed the Red Dot initiative, which provides transport to healthcare workers to their homes in the evenings, and transports people to and from public quarantine and isolation facilities,” said Wenger.

Red Dot has transported over 12,000 healthcare workers since its inception in May 2020.

Wenger appealed for more testing kits. “We’ve had to take the difficult approach of only testing people in hospitals and those with comorbidities. Other provinces will eventually have to do the same.” DM