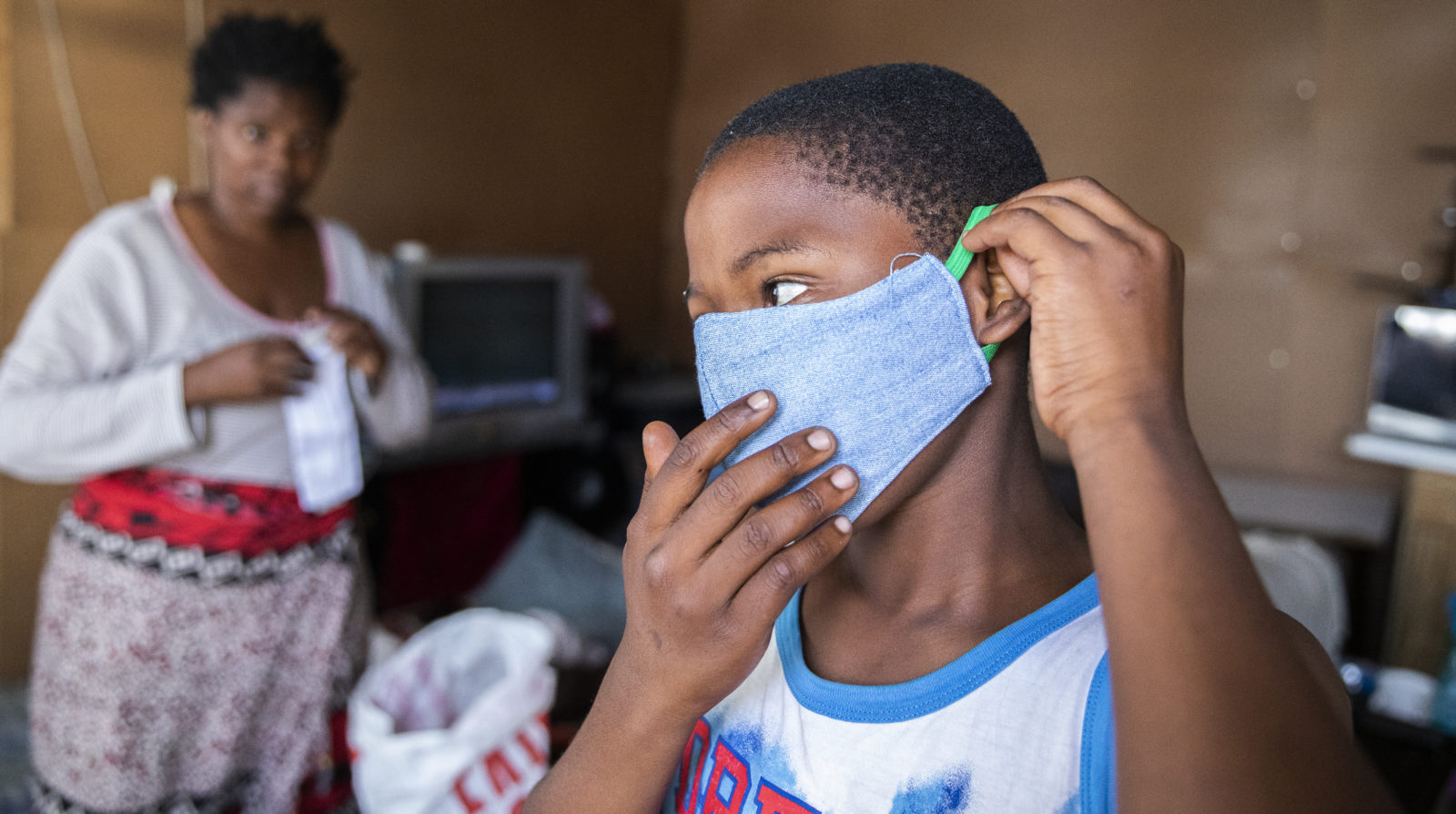 A boy fits a mask made by his mother in Masiphumelele informal settlement, Cape Town. (Photo: EPA-EFE /Nic Bothma)

On Wednesday, President Cyril Ramaphosa addressed the nation to announce that some of the Level 3 regulations were to be relaxed, but also renounced increased levels of gender-based violence. Edcon workers have been hard hit by lockdown with 22,000 jobs on the line and an unlikely Covid-19 hospital in Khayelitsha brings old friends together to fight the good fight.

Swipe through the gallery below to view the latest Covid-19 numbers at the district level. All maps are sourced from provincial health departments. Gauteng, KwaZulu-Natal, the Eastern Cape and Free State had not provided an update by the time of publishing:

Estelle Ellis reported on President Cyril Ramaphosa’s much-anticipated speech on 17 June, where he announced the easing of more restrictions under Level 3. He put a special focus on gender-based violence, saying:

“Over the past few weeks no fewer than 21 women and children have been murdered. Their killers thought they could silence them. But we will not forget them and we will speak for them where they cannot.”

Education about social distancing and the provision of food are what community leaders have asked for. But mostly, they want the government to be accountable for its promises about food relief and financial support during the lockdown, writes Suné Payne

GroundUp contacted shelters across Cape Town and found that there were few places available, despite city councillor Zahid Badroodien’s claim to the contrary.

On 1 June 2020, Christina Nomdo assumed tenure as the Western Cape’s Commissioner for Children – the first position of its kind in South Africa. Her new job comes at a critical time amid concerns for children during the Covid-19 pandemic. Domestic abuse and child hunger during a lockdown, missed schoolwork and risk associated with pupils returning to classrooms on 8 June are some of the key issues, she told Biénne Huisman

Sasha Planting reports that, as Edcon issues section 189s to 22,000 workers, mid-sized retailers warn of bigger job losses if their needs are not heard. Retrenchments are piling up across sectors in South Africa as the recession, coupled with the Covid-19 lockdown, sees the economy contract faster than a pricked balloon.

New Frame tells the unlikely story of Khayelitsha’s field hospital, where three people who found themselves marooned in Cape Town used their time and expertise to play key roles in setting up a 60-bed medical facility for Covid-19 patients in the township.

On a field in Lavender Hill, known commonly as “The Battlefield”, the lockdown has turned the former gang war zone into a place where hungry children gather daily, getting their only meal of the day thanks to good Samaritans such as Mark Nicholson. GroundUp captures the burial of the children who have died during lockdown in a stirring photo essay. DM/MC