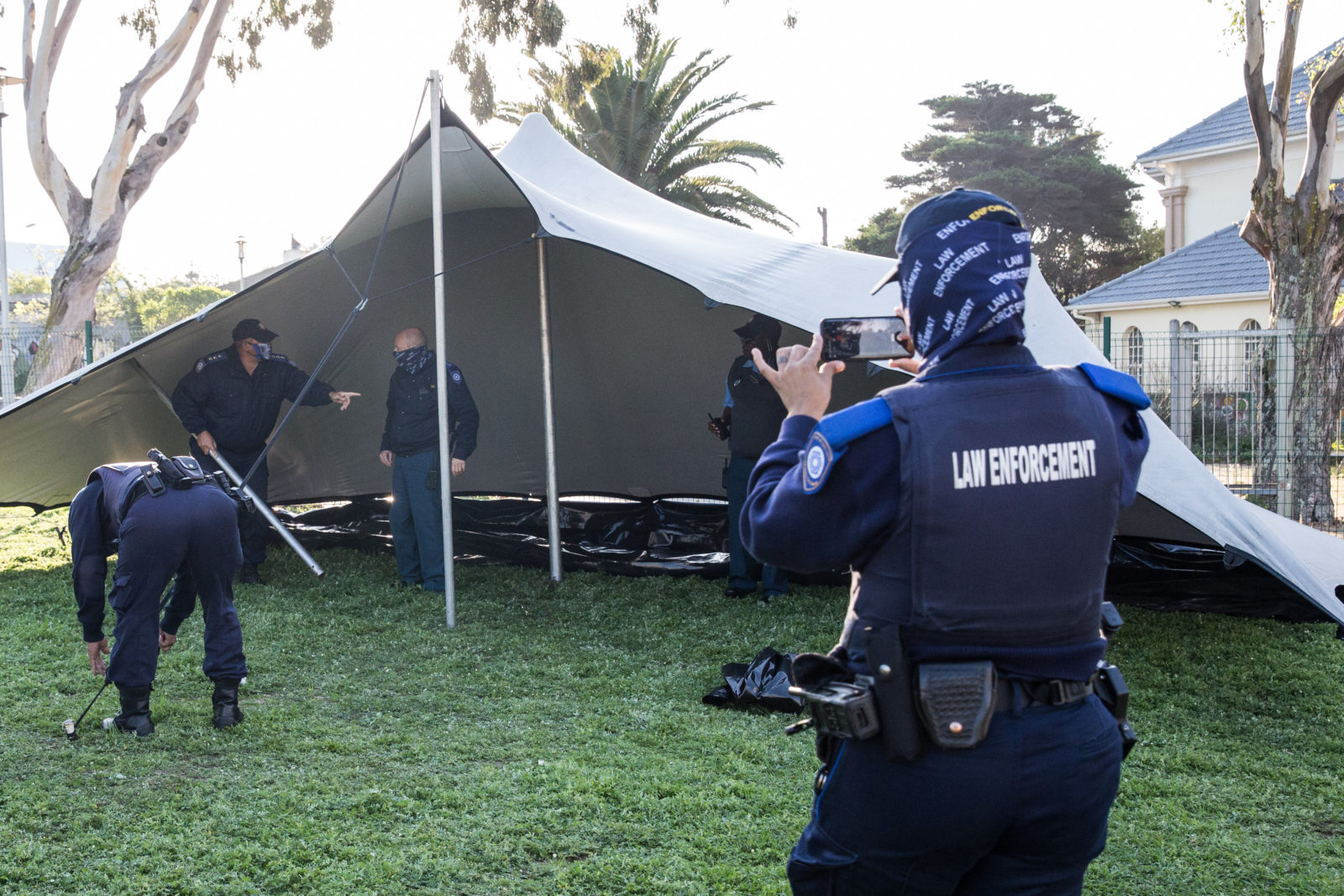 After a tent erected in Observatory to house homeless people was taken down by the City of Cape Town last week, councillor Zahid Badroodien said there was room in shelters. (Photo: Ashraf Hendricks)

GroundUp contacted shelters across Cape Town and found that there were few places available at shelters, despite City Councillor Zahid Badroodien’s claim to the contrary.

At the height of the storm which battered Cape Town last week, City of Cape Town councillor Zahid Badroodien insisted there was space in the city’s shelters for homeless people. But our investigation found otherwise.

On 11 June, following the removal by the City of a tent that had been set up to provide shelter for homeless residents of Observatory, Badroodien, who is Mayco Member for Community Services and Health, said: “Homeless shelters are available, no need for breaking the law”.

Spaces were available at homeless shelters across Cape Town, said Badroodien. “Shelters across the City are ready to welcome homeless persons. The public is encouraged to donate to these shelters or help a homeless individual to access them.”

“Together with NGO partners, care and shelter is being offered for up to 4,000 homeless persons in these trying times,” said Badroodien, referring members of the public wishing to help homeless people to the Western Cape provincial government’s directory of shelters.

The website lists 13 shelters in greater Cape Town, with a further five outside Cape Town. Of the City shelters listed, nine are run by the Haven. The Haven also runs a shelter in Bellville, which is not listed, and a number of shelters out of town.

The Street People Enumeration report lists the following ‘shelters’ which are not included in the Western Cape’s list: Youth Solutions, Beth Rogelim (Salvation Army), Culemborg Safe Space, MES (formerly Metro Evangelical Services), OASIS, Somerset West Night Shelter, ARK. At the time of the report there were 2,446 beds in these shelters.

Groundup contacted as many of the shelters on both lists as we could.

Here is what we found:

Anyone seeking entry into Culemborg Safe Space must first go to the Department of Social Development (DSD) and get a referral letter. DSD will then inform the person whether there is space at Culemborg.

In total, according to what GroundUp could find out, there were 25 spaces available in various shelters subject to the presentation of a Covid-19 negative result, and 10 spaces for men only available at the OWL Shelter in Lansdowne (seven kilometres from Observatory as the crow flies), subject to screening. It’s possible there were more spaces at the places that did not respond to us.

The City of Cape Town report found that 3,999 people were homeless in November 2018, 16% fewer than the previous count, four years earlier, and 2,084 people were in shelters.

But when the researchers drove around the city between 13 and 30 November 2018, counting people that they saw, they did not enter the following suburbs as they were ‘crime hotspots’: Manenberg, Bonteheuwel, Belhar, Delft, Kraaifontein, Macassar, Pelikan Park, Philippi, Lavender Hill, and Strandfontein. Instead, the researchers gave estimates for the total number of homeless people in all of these areas, which came to 92 people. Yet the Kraaifontein Haven shelter alone had 98 beds in its shelter, all occupied as of 31 March 2020.

Shelter after a disaster

The City of Cape Town offers “Emergency Sheltering”, usually in community halls, for people in informal settlements whose homes are inundated during storms, or destroyed in fires. But storage is not made available and Charlotte Powell from the City’s Disaster Management said: “The City’s facilities are available for emergency sheltering and will be made available if evacuation is required. However, residents don’t want to take up the offer because they don’t want to leave their belongings behind.”

According to Powell, in order to access emergency shelter, people must “make contact with their local councillors so that the ward councillor can inform the Disaster Risk Management Centre during a flood event. When a Disaster Risk Management official completes an assessment and residents need to be evacuated to emergency sheltering, this will be made known to communities.

She said residents could stay in community halls for three days after a flood and this could be extended for another three days.

“No residents were displaced during June 2020 and no emergency sheltering was required.” DM