Mbali Ntuli: The ‘Star Trek’ fan running for leader of the DA 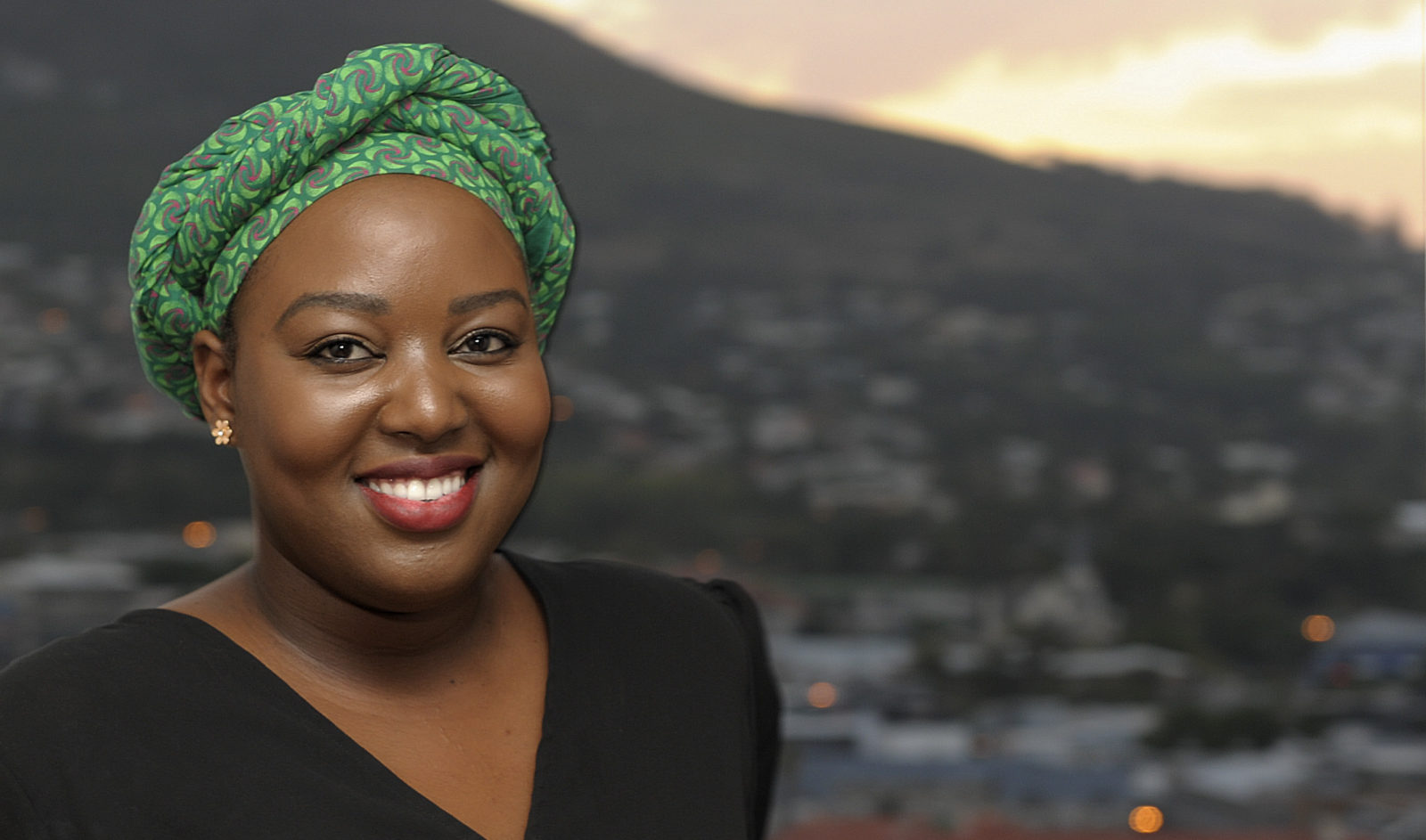 On one hand Mbali Ntuli is a Star Trek fan, with a busy travel schedule (pre-Covid) and plans to soon view the Northern Lights. On the other hand, back home in Durban, she regularly speaks to her ancestors and believes in the virtue of homestead life.

On bringing a modern lifestyle and tradition together, she says: “I think it’s what a lot of black South Africans my age have had to learn to live with, the two kinds of worlds that we occupy.”

Ntuli met her partner through Facebook in Accra, Ghana.

“It was a research trip,” she says. “I’d been having a lot of tilapia fish, which is a common meal there. So I was bitching on Facebook. I was like, what I really need now is a steak! Can someone please direct me? Then somebody tagged him. And, well, he offered to show me some places. And that was it.”

That was in 2017. Now, they are raising their one-year-old daughter named Sarabi (Swahili for “mirage”; it’s also Simba’s mother’s name in The Lion King) in line with Zulu tradition.

“We want our daughter to grow up in the same way that we did,” says Ntuli. “Around the fireplace; fetching water, running around with chickens and cows, that kind of thing. I think it’s very important that she learn her history of being Zulu. I mean, we’re both quite traditional. Actually, it turned out that his family village is across the valley from ours. So we take our family homestead lives very seriously.”

In a rented apartment in central Cape Town, Ntuli is seated in front of a window with a view of Table Mountain. Outside, Friday afternoon traffic is easing out of the city (this was pre-Covid). She’s sipping a gin and tonic to mark the end of the day, which saw her in Cape Town for a Daily Maverick panel discussion on South Africa’s future.

“Is this that low kilojoule stuff?” she asks, lifting her drink. “No, I need sugar!”

In February, Ntuli announced that she was running for leader of the opposition party, the Democratic Alliance. At 31 years old, she will be the youngest candidate contesting interim federal leader, John Steenhuisen. With a track record of building the DA’s youth base – notably in the Durban townships Ntuzuma, KwaMashu and Bhambhayi, and in rural Mkhanyakude – she presently serves on the KwaZulu-Natal Legislature, and as the DA’s provincial spokesperson on cooperative governance and traditional affairs.

The idea to run for the DA’s top job started germinating in December. “I thought we needed a new way of doing politics in this country,” says Ntuli.

“John (Steenhuisen) had been elected at that stage. And hearing him speak about stabilising the party and retaining the votes – you know, maintaining the Western Cape – this started to make me panic because my thinking is that we need to try and move towards a trajectory of expanding into new areas. Obviously you want to keep your base happy, but you also want to try and gain momentum with people that haven’t considered the party a political home.

“It doesn’t have to be the same style of politics that we’ve been doing because, well, I know I’m damn bored of it. And I think I speak for many South Africans. I certainly think I have the ideas and the ability to talk to the majority of people in this country with ease.”

Ntuli launched her website mbalintuli.com where her manifesto outlines steps to “save the DA” and to “save South Africa” in bullet points.

For example, she writes: “End the personality cults around leaders that we have allowed to creep into our organisation.”

It was controversy around ritual slaughter that led to Ntuli’s first encounter with the DA when she was eight years old.

“When my dad died in 1996, we had to slaughter cows as part of the traditional ceremony,” she says. “We had to do that at the house where we lived, which was in the middle of suburbia. We were the first black family to live there. So one of the cows escaped and ran around the road and all the white people were like: ‘Oh my God!’

“It was a big controversy. And Roger Burrows, who was at the time a DA leader, came to my mum. He asked her in a very nice way, like, ‘What is this about? What are the ceremonies about? What’s happening?’ And he was so kind about trying to bring the community and us together and to show people that we are now living in a new South Africa.

“Also, on the other side of our house lived a guy called Mark Lowe. He was a DA leader too who happened to be the deputy mayor of Durban at the time. So my mum and his mum forged a very interesting relationship. One day my mum’s goat was making a bit of a noise, and Mark’s mother peeked over the wall and said: ‘Could you get that goat to stop making a noise?’ And my mum was like: ‘Oh, I’ve been meaning to ask, could you get your dog to stop making a noise?’ They had a stand-off, and then became really good friends.”

“‘So the taxi industry was the first business that could create generational wealth – I mean real wealth – for black people,” says Ntuli. “And for a long while it was unregulated too, so there were all these multimillionaires around. My dad made it something quite honourable, in terms of how people’s families would be taken care of. He had a big emphasis on giving back to the community, building schools and cottages. So yes, my dad was a legend. Often I still meet someone who says: ‘Your dad put me through school’, that kind of thing.

“Obviously, because of the nature of the money that was coming in, it became a very contested space. So the taxi wars started and the police put a bounty on my father’s head. He left for Mozambique in 1996, where he contracted malaria and died.

“After that, his empire had to be split up. He had been very good about having a will but my paternal family started fighting: aunts, uncles, siblings from other mothers. I mean they came out and shot at our beds, in our house, chasing my mother with a shotgun. It was a huge thing.

“We had uncles trying to kill us, assassination attempts in the street. My mum was taking us to school one day when gunmen stopped us, shooting at us. My mum crashed the car, and I ran to go get help. I mean the bullets just missed my brother, who was five at the time. Because of that trauma he started stuttering; he still does.

“Then my gran tried to poison us; my paternal grandmother. She gave us food with something in it, some muti. My brother got really sick. I didn’t get that sick, I mean I have a stomach made of steel. She is dead now, we never saw her again after that.”

In the midst of the family feud, Ntuli’s mother, Thobile, kept her children grounded.

“My mum refused to leave our house, we went on living there,” she says. “Yes, she is pretty gangster. She really held it together, making sure we had all the opportunities we needed. We never felt like we were wanting for anything.

“Plus, she was so smart and worldly. Once a week she would take us to the opera, to the Playhouse in Durban. We saw most of the Andrew Lloyd Webber musicals, well the re-enactments; she was big into classical music. She would take us to all these different places, making us travel.

“I think for her it was to make sure we didn’t feel like the death of our father sort of stopped our lives. I mean, in many ways it did, but at least to a certain extent, materially, it didn’t. Later she took over his taxi business and his routes. They really bullied her and threatened her. She had to carry guns for a while. And then, when we grew up, she gave us some routes, too.”

Ntuli attended Wykeham Collegiate boarding school in Pietermaritzburg and completed a BA in social science at Rhodes University in the former Grahamstown (Makhanda). Here, campus life further cemented her DA allegiance. “Some students had been financially excluded, and nobody was really trying to help them,” she says. “The DA was the only party that came back to us to say, you know, they would see what they could do.”

Commenting on women’s rights and polygamy in KwaZulu-Natal, Ntuli says: “I think it’s interesting because you want to give people the opportunity to make their own decisions. If you want to be in a polygamous arrangement, that should be completely your choice. It’s the same thing with virginity testing. Personally I think it’s abhorrent, an outdated, archaic practice deeply rooted in patriarchy. But, in KwaZulu-Natal, there are people who genuinely believe in it – that it keeps girls, and by extension boys, from participating in unsafe sex.

“So it’s a very fine line. I will uphold women’s rights, and fight for them. But at the end of the day, I think the fight is for them to have the choice over their own decisions, rather than imposing what you think.”

Ntuli has made headlines for altercations with DA stalwart Helen Zille, but described their meeting during a coffee break some months ago as “cordial”.

Asked about a perception that black leaders are used as tokens in the DA, she responds: “People will let themselves be used if they want to; if they think it will advance their careers. I’m not sure that’s an issue of race, I mean I see people from all races being puppets. It’s politics, basically. And some people do this strategically.”

However, on a broader level she points out that issues of race are inevitable in South Africa. “This idea of a non-racial society, that kind utopia, it really is not the reality many South Africans are feeling,” she says. “We have to admit that for many people, race is ubiquitous in their lives. And I think that is something the DA skirts around a lot, and it’s exacerbated by black party leaders who end up leaving.”

The DA’s elective conference was scheduled to take place in May but was postponed with the onset of Covid-19.

Despite the gravity of Ntuli’s political ambitions, she has a flare for touching on lighter notes. She relays her love for science fiction, films and musicals. “Can’t we just bring a Disney World to South Africa?” she says, laughing. “It would be great for tourism, plus we’ll bring Timon and Pumbaa home. I bet I’d get lots of votes for that.” DM/MC