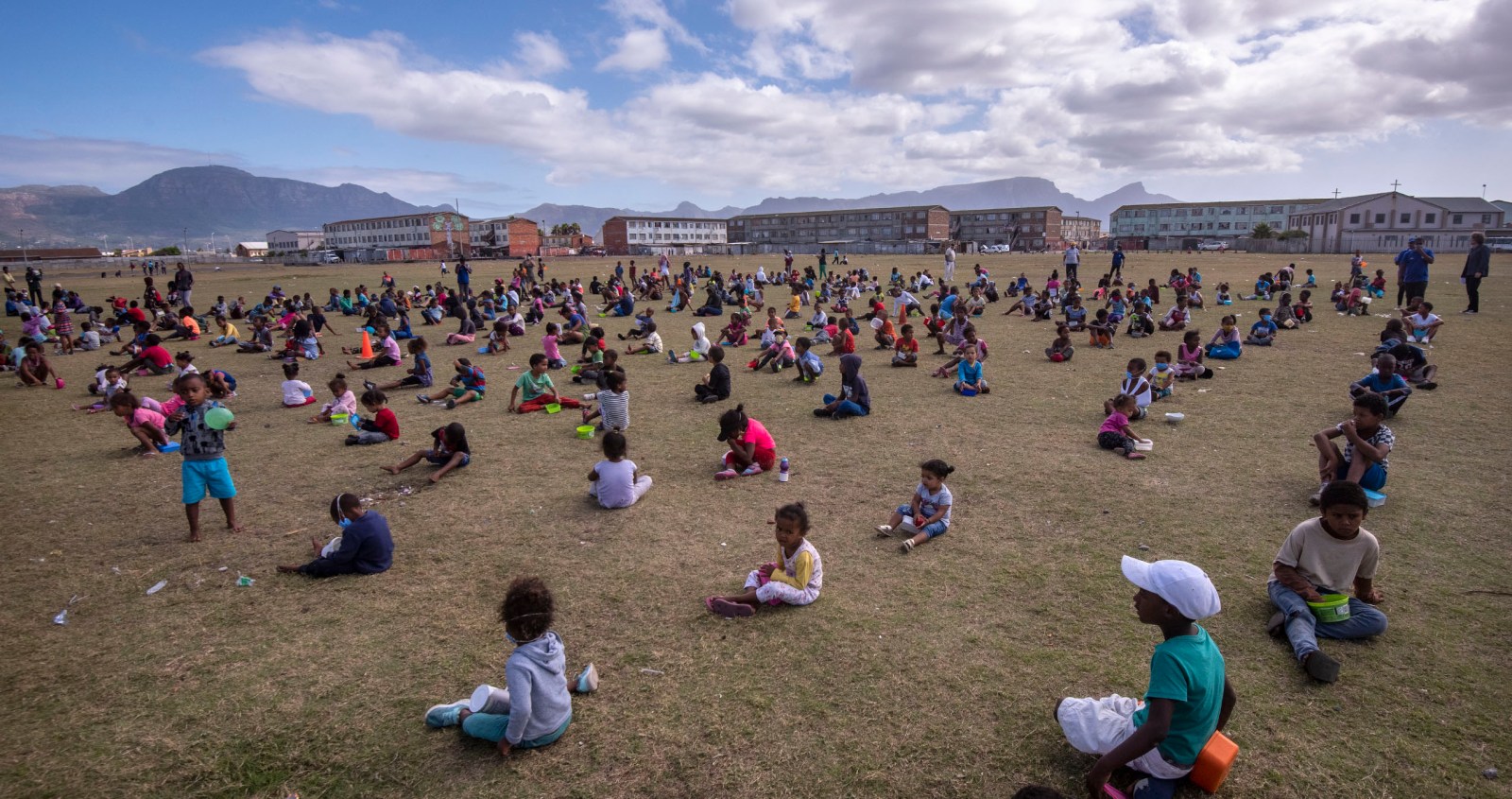 Weather-dependent, as many as 300 children at a time converge on "The Battlefield", which has become the turf of humanitarians Mark and Shireen Nicholson and their dedicated helpers, who feed the children twice daily, Monday to Saturday. (Photo: Brenton Geach)

Almost everything has been on hold during the coronavirus lockdown, including plans for a multi-purpose centre on a crime-ridden field in Lavender Hill on the Cape Flats. For a while, even gang violence subsided — but no longer under lockdown Level 3. Meanwhile, hunger worsens.

Lavender Hill is an old apartheid dumping ground, notorious for gang wars and strife. Local community members have been pinning their hopes for a better future on a tract of vacant land they hope to transform from “The Battlefield” — across which gangsters regularly fire gunshots at one another — into a “Field of Dreams”, in the shape of a multi-purpose sports, arts and culture centre.

This field brought together Ralph Bouwers and Mark Nicholson in a partnership. Bouwers was a successful UK businessman, born and raised in Lavender Hill, who returned home after being sickened by the suffering in his former community. He met Nicholson, who ran the local football club that played on “The Battlefield” adjacent to his home.

Enter Turner Adams. I was introduced to Adams, who when in prison had been a member of the 28s, more than 17 years ago. I had begun to document the tik drug scourge that was ripping apart poor communities.

Years later, in 2017, Adams was looking for a positive way to uplift his community. He said he had never been a gang member outside of prison. He got involved with a production company doing a documentary about tattoos and he shared his thoughts with producer Janette de Villiers.

The idea for a field of dreams began to take shape. De Villiers got in touch with Ruth Daniel from In Place of War, a global, UK-based organisation that uses creativity in places of conflict as a tool for positive change. The organisation will provide seed funding for the new complex.

Daniel connected with Bouwers, who in turn brought Nicholson on board.

It was a long journey, through years of red tape with local government, but in January this year the development of the field finally got the go-ahead.

Then Covid-19 put everything on hold.

With school feeding schemes having shut down, Nicholson and Bouwers turned their attention to feeding hundreds of local children on the field every day.

In the first weeks of hard lockdown, there were no incidents of gang violence. Then the government released several thousand prisoners on parole and the lockdown eased to Level 3. Gang wars sprang back to life all over Western Cape. Lavender Hill and its surrounds was among the hardest-hit, with multiple killings being recorded. One person was shot six times just across the field from Nicholson’s home.

One can only pray that Adams’s vision to transform his neighbourhood, with the help of Bouwers, Nicolson and others, will be realised. DM

Brenton Geach is a veteran photographer based in Cape Town. All the photos above and below were taken during the lockdown, except the portrait of Adams.