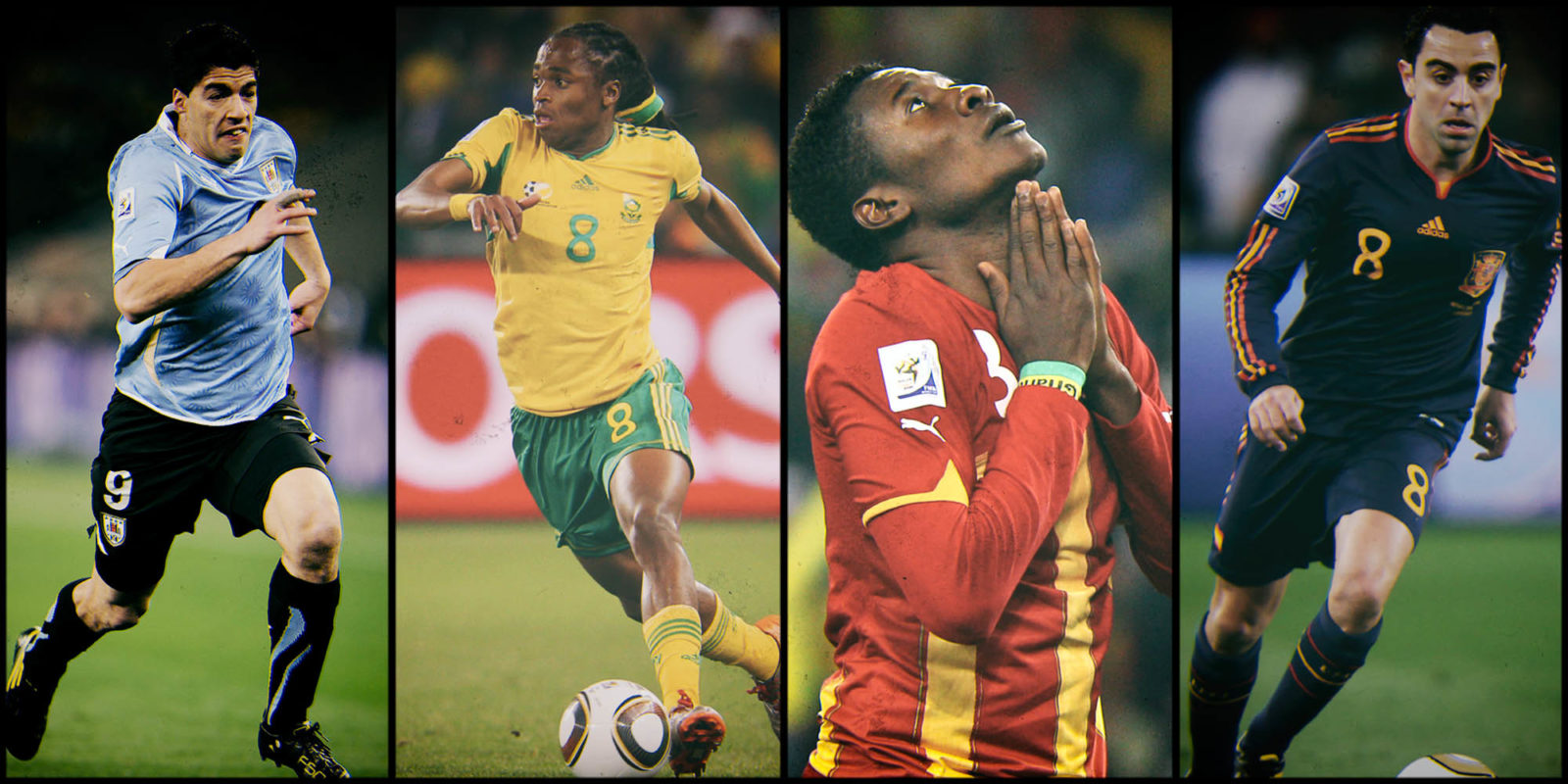 Players such as Andres Iniesta, Luis Suarez and South Africa’s very own Siphiwe Tshabalala left an indelible mark on the memories of those who tuned in to watch Africa’s first Fifa World Cup.

The 2010 Fifa World Cup was the first to be hosted on African soil. And despite predictions that the tournament would be a failure, ruined by crime, South Africa hosted the world admirably.

There was, however, the disappointment of South Africa picking up the unwanted record of becoming the first host nation to be eliminated in the group stages of the tournament.

In spite of that setback, many of the stars on show left strong impressions in the minds of the watching millions. Some with scorching displays, others with poise and yet others with villainous acts that left a bitter taste. Here is Maverick Sport’s pick of the 10 brightest stars of the tournament:

It is 11 June 2010, a Friday evening. Tens of thousands have packed into Soccer City Stadium in Johannesburg. Millions around the world sit glued to their TV screens, watching the opening match of the Fifa World Cup between South Africa and Mexico.

It’s a pretty even game until the 55th minute when Kagiso Dikgacoi spots the run of Siphiwe Tshabalala down the left wing and proceeds to lay on a delicious, defence-splitting pass. Shabba traps, looks up and proceeds to blast a rocket of a shot past a hapless Guillermo Ochoa in the Mexican goal. In the process he writes himself into football folklore – the first African to score a World Cup goal on African soil.

The Kaizer Chiefs legend, who recently returned from a spell in Turkey with BB Erzurumspor, still looks back fondly at a goal that was nominated for the Fifa goal of the season award that year.

Despite playing a more subdued role and letting his strike partners, Luis Suarez and Edinson Cavani, lead the attack during the tournament, Diego Forlan still managed to be a talisman for Uruguay and a terror for his country’s opponents in their run to the semi-finals.

He finished as joint top scorer in the tournament with five goals, including a long-range strike against Bafana Bafana in the group stages and wonderful volley in the third-place playoff match versus Germany. This latter goal was voted goal of the tournament and Forlan was also awarded the Golden Ball as the tournament’s best player.

Now retired, the Villarreal and Atletico Madrid legend is manager of his boyhood club Peñarol back home.

During the 2010 World Cup Sneijder was an integral part of the Dutch ship that sailed all the way to the final, before an agonising loss to Spain.

Coming off an industrious season with Jose Mourinho’s Inter Milan, who he had helped win a treble, the diminutive playmaker showed no signs of being jaded. Instead, he played with the hunger of a lion, even with his regressing mane. This led to him finishing as joint top scorer in the tournament, with five goals.

Sneijder, who holds the most caps for the Netherlands, has since retired from the beautiful game and is a director at Dutch club Utrecht.

Despite being level on five goals with Wesley Sneijder, Diego Forlan and David Villa, Müller was given the World Cup Golden Boot after edging his rivals in the assists. The German managed three assists while the others got just one each.

It was a commendable feat for a 20-year-old who was making his debut on the biggest stage in world football. In fact, so brilliant were his displays that people started speculating whether he came from the same bloodline as lethal German striker Gerd Müller. Of course, this was not true – the only thing the pair shared in their DNA was a knack of punishing opposition defences.

Ten years later, the German is a stalwart for both Germany and the club Bayern Munich, having scored almost 200 senior career goals.

Ever the cool head, Andres Iniesta became a Spanish hero when in the 117th minute of the tournament final he scored the winning goal against the Netherlands. He was named the Man of the Match in that game and was included in the Fifa World Cup All Star Team.

The playmaker was instrumental in the implementation of the Spanish “tika-taka” style of play. Living up to his nickname of El Ilusionista, he ghosted between the lines and popped up in dangerous areas throughout the tournament.

In 2018 Iniesta departed his boyhood club, Barcelona, and signed for Japanese club Vissel Kobe, where he currently plies his trade.

Another Barcelona old boy, Xavi was the GPS system that directed Spain to the pinnacle of world domination. His poise in the midfield, as well as the uncanny gift of seeing things others couldn’t, meant many a dangerous pass.

To put it into perspective, he provided the greatest number of accurate passes in the tournament (599), with a passing success rate of 91%, and he crossed the ball inside the 18-yard box more than any other player in the tournament.

After leaving Barca in 2015, Xavi spent some time in Qatar playing for Al Sadd. In May 2019 he announced his retirement from football. Soon thereafter he was announced as the new manager of Al Sadd, a position he still holds.

The bug-eyed creative tour de force got introduced to the eyes of the world at the age of 21. Before that, he was in relative obscurity and had gone about his business quietly, but admirably, for Werder Bremen in the Bundesliga.

After displays that saw him being called “a gift for German football” by German coach Joachim Low, Ozil left Bremen for Real Madrid — not long after the 2010 World Cup had concluded. He had marked his first World Cup with one goal, but his playmaking ability really stood out as he made three assists.

Following a three-year stay that saw him form a telepathic relationship with Cristiano Ronaldo at the Bernabeu, Ozil departed Madrid to join Arsenal in 2013. This is where he waves his magic wand currently, when he is not being criticised for being a lazy liability and luxury player by television pundits.

Regarded as one of the best wingers of all time, the Dutchman was a key team member as the Netherlands almost won their maiden World Cup trophy. After missing the first two games due to a hamstring injury, he hit the ground running, helping his team overcome opponents such as Brazil and Uruguay to reach the final against Spain.

There was that dreadful miss in the final, when he was one on one with Spanish keeper Iker Casillas. That strike could’ve clinched it for his country, and Robben knows it too. He has said that the miss still haunts him.

After a stellar career that saw him play for teams such as Chelsea, Real Madrid and, most notably, Bayern Munich, in July 2019 Robben announced that he and his iconic left foot were retiring from football.

The target man was immense for Africa’s best-performing country in the tournament. Gyan scored three out of the four Ghana goals during the showpiece. However, he will forever have the penalty miss against Uruguay in the quarterfinals at the back of his mind. This after Luis Suarez’s desperate handling of a goal-bound effort in the dying minutes of the game, with the score at 1-1.

Gyan, for his part, was unlucky. He had scored countless penalties but, with the weight of the whole African continent on his shoulders, his effort tipped the crossbar and sailed over the goal with what would’ve been the last kick of the game. It was eventually settled on penalties, Uruguay emerging 4-2 winners.

Following the tournament, Gyan signed for Sunderland in England. Since then he has played in the United Arab Emirates, China, Turkey and India. He has his fingers in many entrepreneurial ventures in his homeland.

Ever ready to play the villainous role, including sinking his teeth into opponents, the prolific Luis Suarez was one of the breakout stars in South Africa 2010. He had already been lighting up the Dutch Eredivisie, scoring for fun in the colours of Ajax Amsterdam.

He brought that form into the tournament and scored three goals. But his biggest play was the infamous handball which ultimately cost Africa a first-ever spot in the semi-finals of a World Cup. Suarez was unapologetic in the aftermath, saying he would do it again, and claiming that he had upstaged Diego Maradona’s “hand of God” incident of 1986.

Since the tournament, Suarez has continued to reinforce his legacy as both one of the most lethal strikers of his generation and the most villainous.

He joined Liverpool from Ajax in 2011, scoring 69 goals in 110 appearances for the Reds, before departing for Barcelona in 2014. This is where he currently terrorises defenders — when he is not biting them like he did Chelsea’s Branislav Ivanovic and, later, Italian defender Georgio Chiellini at 2014 World Cup. DM