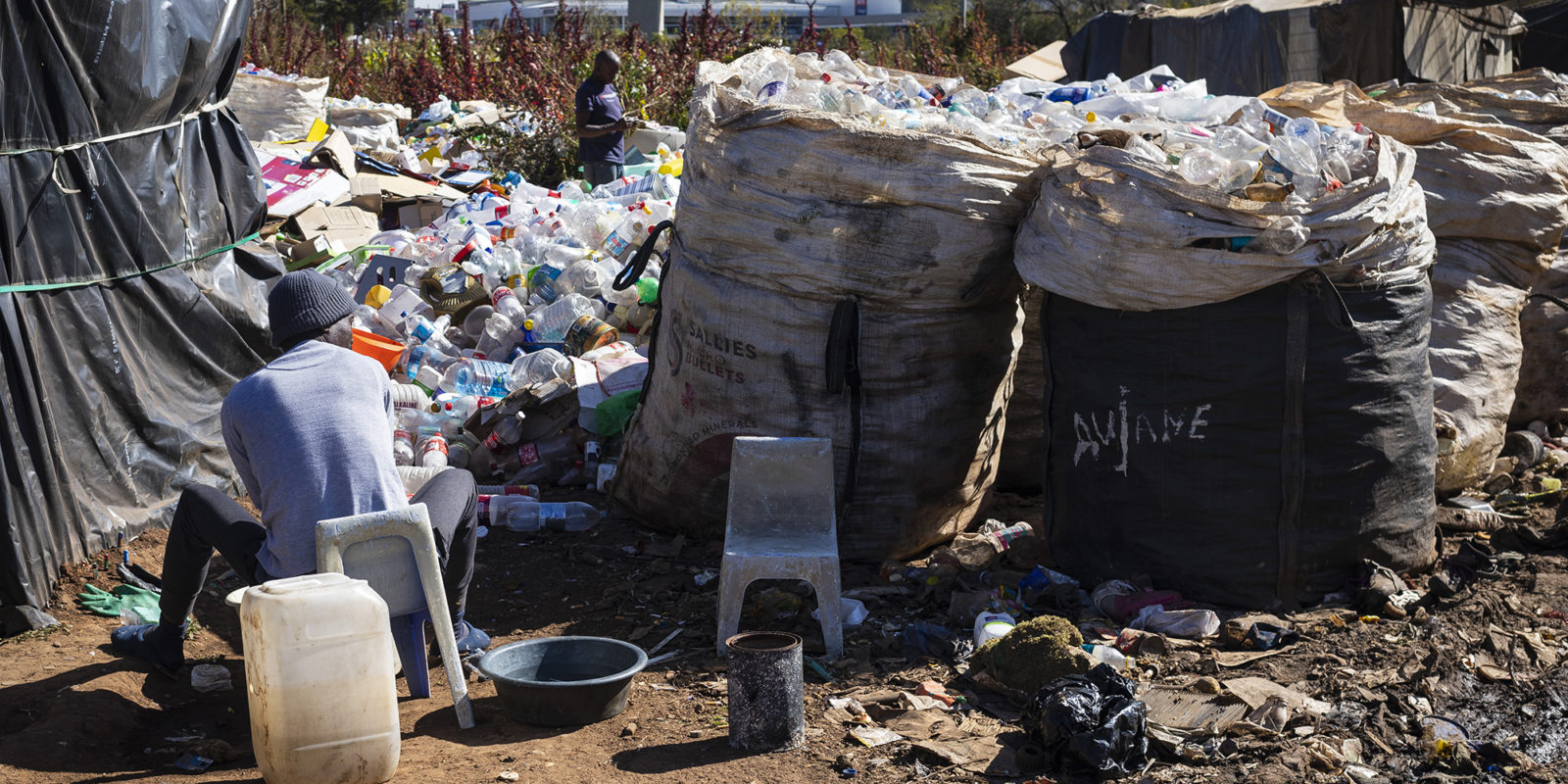 A recycler sits amongst his recycled plastic collection, Pretoria, South Africa, 27 May 2020. The recycling area is called 'Mushroom Farm' and is home to both South African and Besotho people who collect rash for recycling. The community at Mushroom Farm collect mostly plastic to sell for small amounts of money to larger recycling firms. EPA-EFE/KIM LUDBROOK

In the early days of the nationwide lockdown, two informal recyclers were arrested for breaking regulations by trying to collect plastic. They remain behind bars today as their legal representatives battle to obtain a letter to force the facility to allow them to visit the waste pickers.

Justice Shabangu and George Mphotse are both waste pickers who have been detained at Kgosi Mampuru Correctional Facility in the City of Tshwane since early April 2020. Their crime: venturing out in the vicinity of Centurion to collect recyclable materials in order to make an income.

For the past two months, their legal representatives have been unable to consult Shabangu and Mphotse to find out details of the charges or why they have been detained at the facility.

It is unclear if Shabangu and Mphotse are aware of their charges, but legally, they can’t be held without trial for longer than two full days. This was not the case with the two men.

Furthermore, under lockdown regulations, legal practitioners are classified as essential workers and thus should be allowed to aid their clients.

“We only know that they are detained in New Lock and the centre has indicated to me telephonically today that they have been instructed not to allow any visitations under any circumstance,” Thandeka Chauke, a legal counsellor at Lawyers for Human Rights, said.

“The fact that correctional centres have refused to allow inmates access to their lawyers… is a serious abuse of their rights to access to justice,” Chauke told Daily Maverick. “…We have taken issue with this in a letter addressed to the Minister and the National Commissioner and, to date we have not received any response to the letter.”

Arthur Fraser, National Commissioner at the Department of Justice and Correctional Services, responded on 8 June 2020 to Chauke’s office, stating that he would “ascertain the facts concerning the issues raised and will revert to you in due course”.

Shabangu and Mphotse were arrested on 14 April in Lyttelton in Centurion as they were moving their trolley. They were taken to Sunnyside Police Station.

Stefan van der Westhuizen, founder and director of RubiconZA, an NPO which focuses on sustainable community-orientated solutions, has known both men since 2015 when he began working with them in an effort to help waste pickers become part of his informal support project.

Van der Westhuizen also contacted Minister of Justice and Correctional Services Ronald Lamola about their detention as he thought the men should have been fined, not arrested. He has received no reply.

“We don’t even know why they were arrested or why they were not just fined,” Van der Westhuizen told Daily Maverick. “I also approached the Minister on Twitter, but got no answer.”

“We are of the view that violations of lockdown regulations should at the most be punished by a fine, and not imprisonment,” Chauke said.

Because the government would not provide Shabangu and Mphotse with food parcels as they were not eligible under the emergency fund, they ventured out to make some money to support themselves, Van der Westhuizen said. It is unclear whether they had applied for the Social Relief of Distress (SRD) grant, he said.

“They live in a compound,” Van der Westhuizen said. “They had no food — they are not from here. Justice is from the Eastern Cape and George is from Mpumalanga. So they left the compound to earn some money so they could get food.”

To add insult to injury, Shabangu is HIV positive and has TB. Since being incarcerated at Kgosi Mampuru, he has not been able to access his ARV medicine and, according to Van der Westhuizen, “he is also not getting enough food”.

When Daily Maverick sought comment from the Department of Justice, spokesperson Chrispin Phiri said: “This matter is usually dealt with by the South African Police Services (SAPS).”

Daily Maverick asked SAPS for comment, but they were unable to respond before publication.

“It is extremely concerning that most of the regulations have had the chilling effect of criminalising people in a society… plagued by extreme levels of poverty and inequality,” Chauke said.

“It is also counterintuitive and profoundly problematic that while the Department of Correctional Services has started a process to release 19,000 parolees, they are still detaining people for petty violations of lockdown regulations,” he said. DM