The South African lung – can it breathe through the surge? 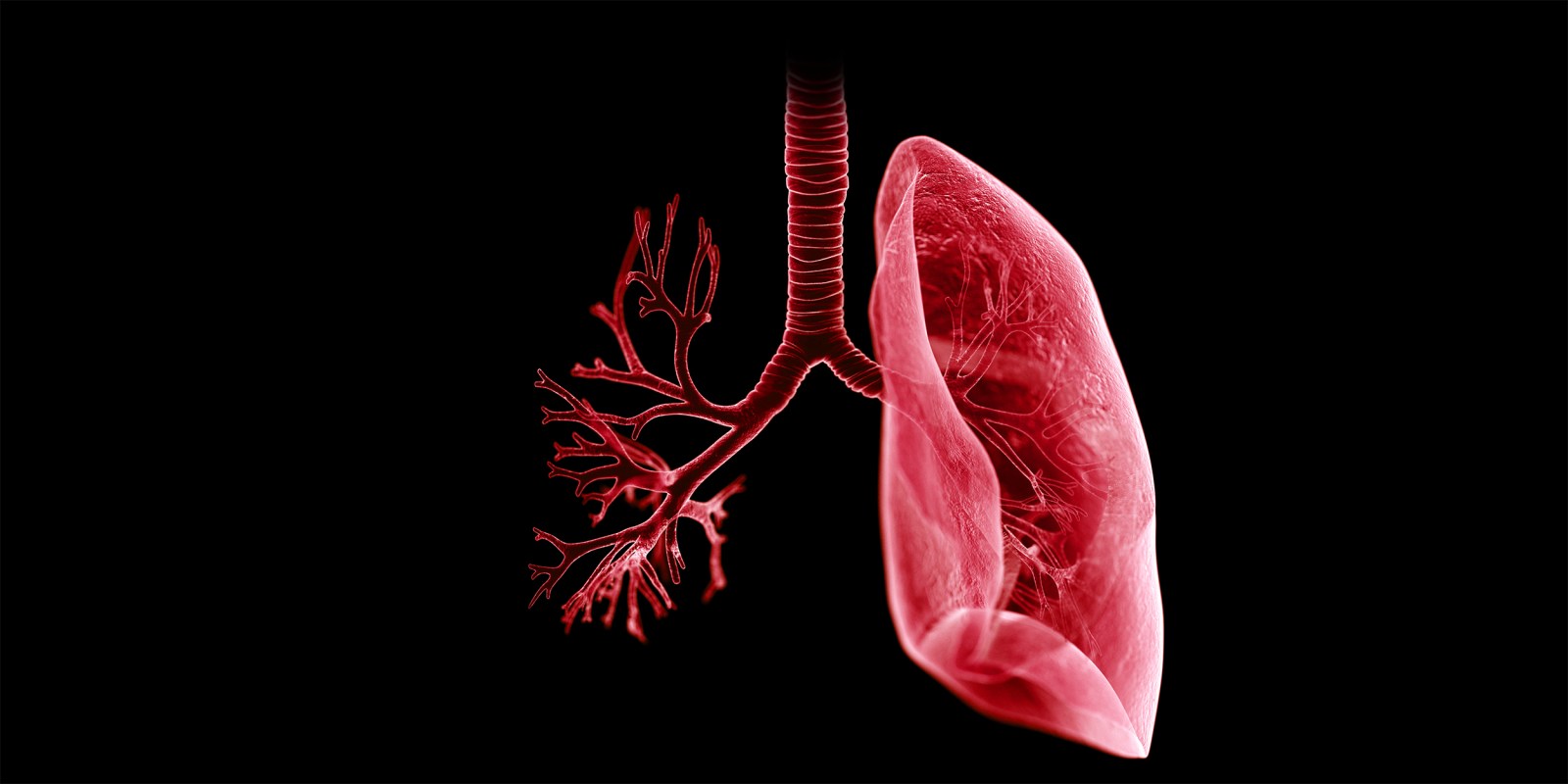 The lung struggles to breathe through apartheid’s history of apartheid mining, suffocating TB, and then HIV and Aids too. This is a story from the frontline and from history.

Breathing is turning into the story of 2020, be it about the ways in which Covid-19 shows up in the body, first as a symptom in the shortness of breath to the #Icantbreathe slogan to describe police violence in the US, the global story of the moment.

South Africa’s journey with Covid-19 is now in the phase of “surge” as cases grow and deaths creep up to the 1,000 mark.  How will we cope?  How will our lungs cope?

If the South African body bears the pockmarks of our past, then the organ most scarred is the lung, the organ of breath. In the 1800s, European colonials with consumption clicked that the sunshine and warm climes at the tip of Africa was kind to their lungs, which tuberculosis had infiltrated to cause mayhem. Resorts for their recuperation sprung up along the coasts.

Infectious as hell, consumption – (or TB as we know it today), continues to be a number one killer in our country – quickly spread to the mass black population, scarring lungs and damaging the small airways, resulting in chronic obstructive pulmonary disease (COPD). The main cause of COPD globally is smoking, but in South Africa, TB is an important cause.

“Almost 400,000 patients per annum are treated for TB in South Africa – 500 to 600 per 100,000 of the population, according to the WHO Global TB report,” says Professor Keertan Dheda, the head of the Division of Pulmonology at UCT and Groote Schuur Hospital in Cape Town, and Director of the Centre for Lung Infection and Immunity at the University of Cape Town Lung Institute.

Then came HIV and Aids in the Eighties and Nineties, which when paired with TB, wrought further damage to the SA lung, killing the human host in numbers that wiped out a generation. We are still paying the price of that loss.

South African lungs are among the most ravaged in the world – TB incidence here is among the basket of eight countries that are vectors of an epidemic that experts say can be cured by 2045 with political and financial will. Eight million South Africans live with HIV and “co-infection is therefore associated with a substantially increased risk of TB and other respiratory tract infections, including influenza and bacterial pneumonia,” explains Dheda.

The mining industry also took its pound of flesh out of the lung. Seven million South Africans smoke obsessively too.

South Africa is built on gold and by mineworkers; the process of its extraction bored up silica, a sand that penetrated workers lungs, condemning hundreds of thousands to the wasting disease of silicosis. “Mineworkers in South Africa have a high burden of silicosis,” says Dheda. And workers also suffered asbestosis from asbestos fibres, which damaged and scarred the lung’s alveoli, blocking oxygen transfer. For a long time, asbestos was used in building material.

Dheda is an encyclopaedia about the lung and especially about its pathology.

If the lung were human, it would need trauma therapy because it is, of course, now at the centre of another pandemic – this time, Covid-19 which strikes lots of places in the body but hits the respiratory system like a viral terrorist. As Covid-19 enters the phase of surge, the lung had better watch out because it has more history of abuse here than in other hard-hit parts of the world. Indeed, COPD is a major risk factor for severe Covid-19 disease and increased mortality due to Covid-19.

“South Africa has a high burden of respiratory disease due to colliding epidemics and risk factors, including COPD – structural damage to the lung due to various insults, post-TB lung disease – damage and scarring, the sequel of bacterial and viral pneumonia…” Ours are insulted lungs and the black person’s lung, in the main, suffers a greater injury and is more at risk.

In informal settlements, electricity is either not available or too expensive to be always-on, so people use wood, coal, paraffin and other fuels for light, for cooking, for life.

Dheda again: “Outdoor and indoor air pollution is estimated to cause 20,000 premature deaths per year in South Africa. It is also associated with structural lung damage, COPD and sub-optimal immunity.  Although most of the country is now electrified, there are still substantial numbers of individuals in informal settlements that use these fuels for heating and cooking, often without appropriate ventilation.”

And to round off the precarious state of the South African lung, there is another risk statistic – five million South Africans are asthmatic with five to 10% regarded as severely so and who need high doses of steroid sprays or oral steroids to keep breathing. The steroids suppress immunity.

“Not surprisingly,” says Dheda, “a large study from England and several others have shown that asthma is a risk factor for worse outcomes in Covid-19. Asthma with recent use of steroids was associated with almost a 70% increased risk of death in one large study.” As Bill Bryson explains in his book The Body: “In an asthma attack, the airways narrow, and the sufferer struggles to get air in and out, especially out.”

While it is often by the contemporary factors that we assess South Africa’s readiness for the Covid-19 surge and peak, which will happen sometime over the next months, history and the history of the lung are huge factors in making that assessment.

“There are a number of risk factors which affect a substantial part of the population that will increase susceptibility to Covid-19 and result in worse outcomes,” fears Dheda, who is already busy 24/7 with studying and treating Covid-19 as it shows up most acutely in the hospitals of the Western Cape.

“These factors are not independent and many of these factors are simultaneously present in individual patients, thus substantially increasing susceptibility and poor outcomes. For example, it would not be uncommon to find persons with a past history of TB that are also present or ex-smokers, with a significant history of exposure to both indoor and outdoor air pollution, some of whom will have obstructive pulmonary disease or underlying lung damage,” says Dheda.

“It has now been established from several post-mortem and clinical studies that between 20% and 45% of patients with Covid-19 also have blood clots in the venous or arterial system (the veins and arteries). Post-mortem studies have shown clotting in the small blood vessels around the air sacs of the lung and also around the filtration units of the kidney.” In other words, Covid-19 is complex and new, and its effects run across multiple organ systems.

The focus of news is almost always at the extreme, but Dheda points to the middle ground of the new pandemic. Most people who get infected with Covid-19 are asymptomatic with only about 20% to 40% of cases ever becoming symptomatic. There is a smidgeon of hope in how limited the extremes appear to be.

“A small proportion of all infected patients, probably close to 2% may need respiratory support.” Bear with us here to understand that range – it’s technical and complex, but important to know: “Assisting breathing either by high flow nasal oxygen supplementation, non-invasive ventilation using masks (when isolation facilities permit), or intubation of the trachea with mechanical ventilation may be required,” explains Dheda. “It is thought that for these individuals who develop severe disease requiring respiratory support, there is considerable inflammation within the lungs.”

As the lung and the body, in general, come in for a pummelling by Covid-19, are there enough doctors specialised in treating this complex organ that controls almost everything in our bodies? Dheda and his team at the UCT Lung Institute are known the world over as lung whisperers of acumen and excellence.

Number of specialist statistics by sector and sex (2019): 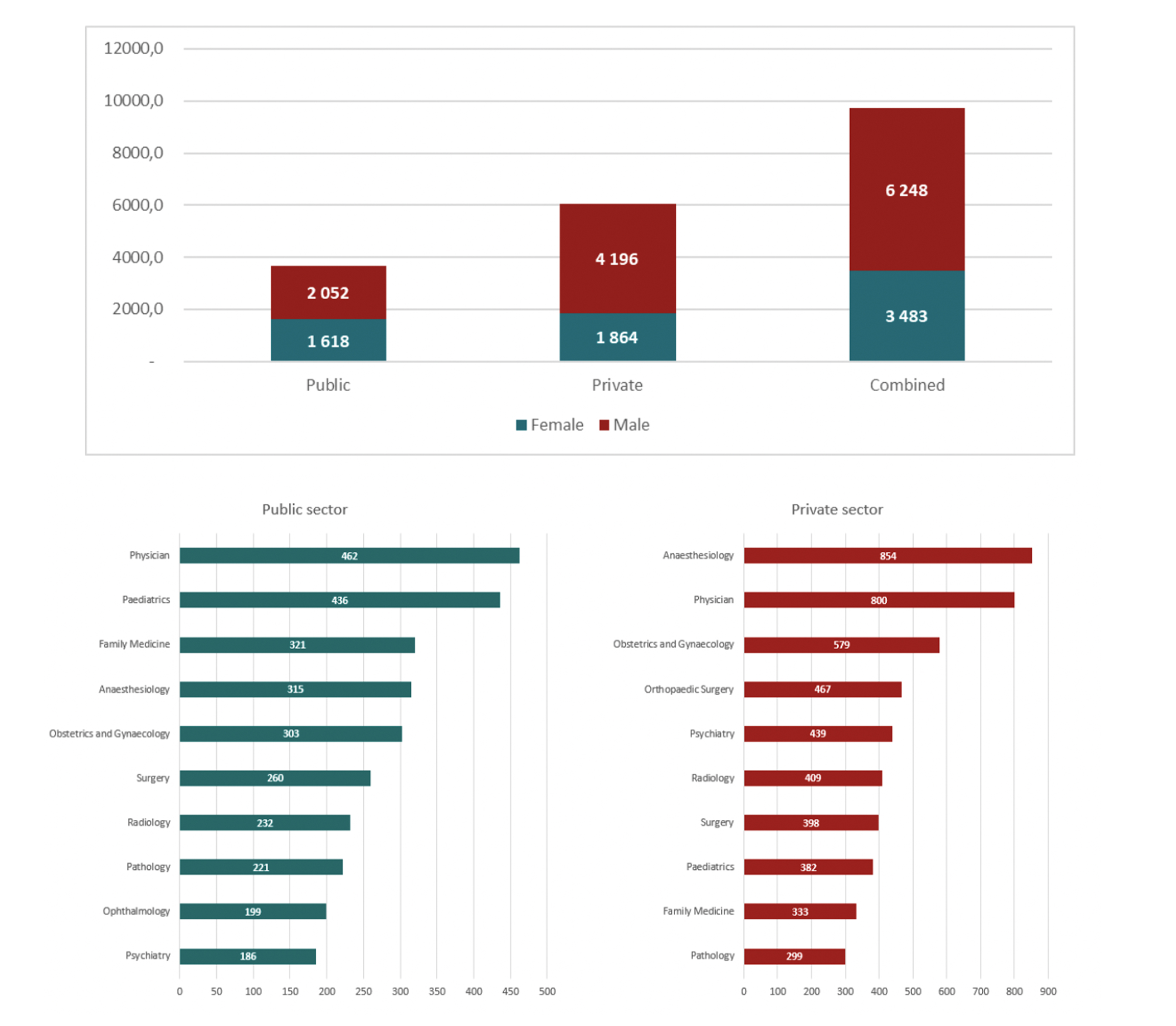 But in research done during 2019, the health actuary Shivani Ranchod produced research which for the first time in South Africa outlined the true range of available medical specialist expertise.

The numbers she found showed a smaller number than before and they revealed, as the charts show, a significant skew to the public over the private sector. “It’s not just a pulmonology story. It’s about pulmonologists and critical care specialists who run ICUs, anaesthetists, occupational health specialists, specialist physicians, palliative care specialists and a range of allied healthcare workers. We are going to have to learn to reconfigure teams in much more flexible ways.”  DM