Voices from PE townships on lockdown and Level 3 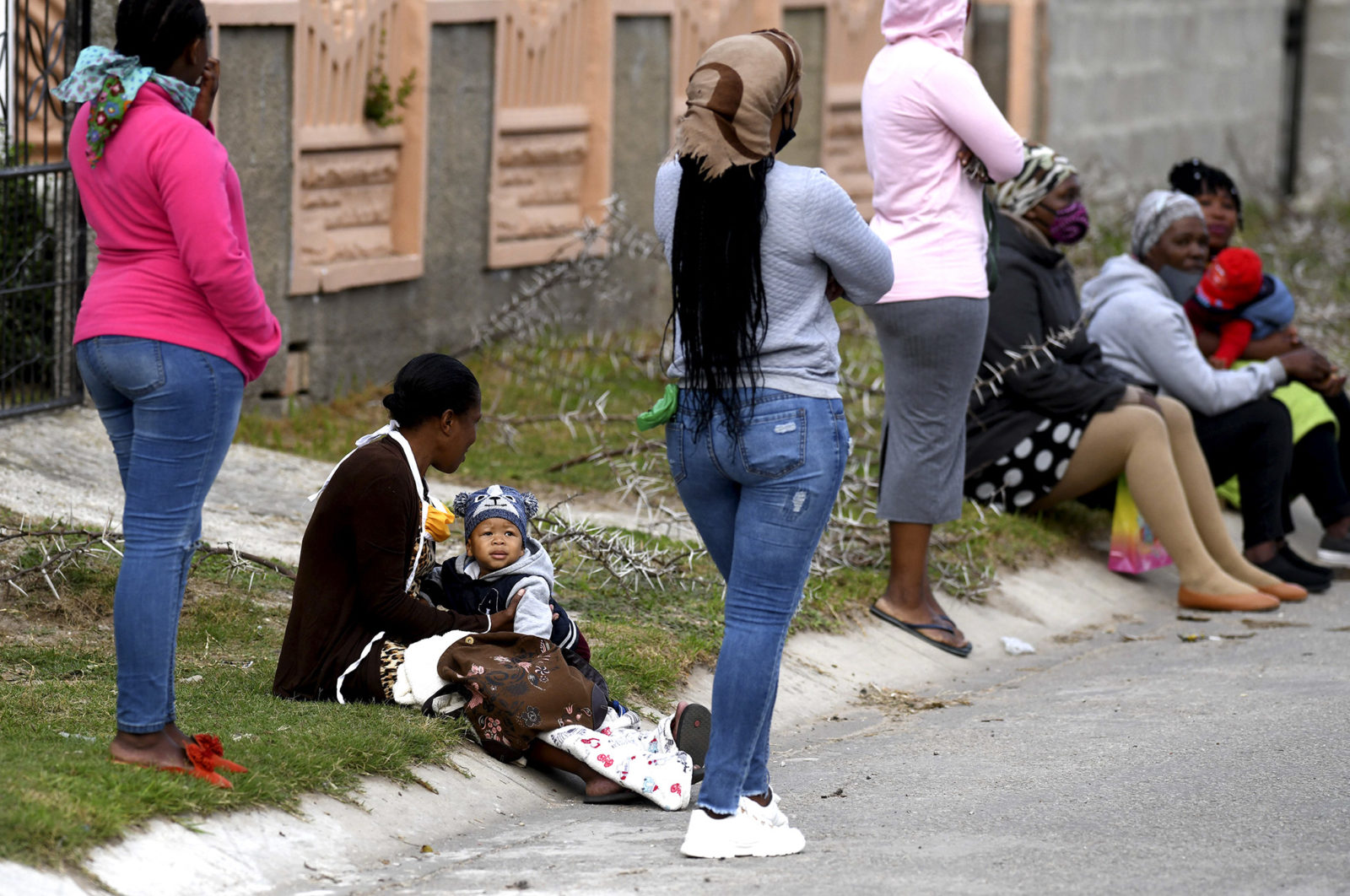 At many health facilities like Gqebera day clinic in Walmer, Port Elizabeth, the long wait for patients are the same as before the COVID-19 pandemic.( Photo: Black Star/Spotlight)

South Africa moved to Level 3 of its Covid-19 lockdown this week. In many townships in Port Elizabeth in the Eastern Cape, residents have mixed views on life under lockdown. Luvuyo Mehlwana visited some townships and spoke to residents.

Despite these numbers increasing, it has been “business as usual” for residents in many townships.

Zolelwa Wakeni, 32, from Mdantsane in East London tells Spotlight that in her area there was no sign of a  lockdown.

“People are moving freely, any time and there are no signs of either police or soldiers. This lockdown is not necessary,” Wakeni says, “because it is business as usual.”

She says only a few people bother to wear masks when they move around the township.

“Township people are not used to staying at home doing nothing for a week, so two months of lockdown is too much for them.”

Choosing between safety and hunger

Nonceba Faye, 65, wishes it was business as usual.

Faye runs an informal business selling chickens at Njoli Square in Port Elizabeth. Based on Statistics South Africa’s Labour Force data released last year, Faye is one of over three million people surviving on jobs in the informal sector.

“I don’t know how I feel about this lockdown because one has to choose between safety and hunger,” she says. “Sitting at home means no income, again going out to trade I’m running a risk of contracting the virus.”

Faye says in the early stages of lockdown, her business took a dip.

“Bear in mind I relied on making an income on a daily basis by selling chickens. For the past 36 years the stall has been my only income up until I started receiving my pension when I was 60 years old. I’m not saying life was easy before the pandemic, but at least I had a guaranteed income. And even though business was already suffering I knew that I would be able to feed my family,” she tells Spotlight.

As a pensioner, Faye is among those most at risk of getting severely sick from Covid-19, but it is sustaining her livelihood that worries her most.

“Even though lockdown has affected me badly and making it difficult to make ends meet, I’m happy that government relaxed [the] regulations. It means there is light at the end of the tunnel and I believe business will pick up once again,” says Faye.

At a clinic in Zwide in Port Elizabeth, Zanyiwe Tose, 48, a resident, blames the clinic for not having a clear strategy on how to deal with patients during this time of lockdown. She says the clinic was closed once before after a staff member tested positive.

“Since then, coming to the clinic is a waste of time because we are standing outside the gates for a long time and wait for our names to be called. We are often turned back without any help,” she says.

Tose says she is concerned.

“There is no social distancing. People are queueing along the clinic’s fence and we are only sanitised when we set foot on the premises. But outside, people are ignoring social distancing principles and no one seems to care about that. Even clinic staff – they don’t care. I think it is high time that government introduce a new system of distributing chronic medication to reduce exposure to the Covid-19 of people who suffer from chronic illnesses.”

Tose hopes she will get her medicine.

“But there is a possibility I might not get my pills today after standing in this long queue the whole day and that alone is discouraging me to collect my medication. We queue as early as 5am to be the first in the queue but we will sit in this queue until late. When we ask them questions about their poor service delivery, they’ll say they are doing their best. But it is us who sit the whole day.”

When asked if the province is considering alternative ways to distribute medicine to chronically ill patients, the head of medical services in the province, Dr Mthandeki Xamlashe, said the department has a central chronic medicines dispensing distribution (CCMDD) programme but it has been “disrupted by Covid-19 at some collection points”.

“We also have a challenge of patients who do not want to use this service because of stigma, but we are working around the clock to educate our people about this programme that is aimed at reducing the number of patients flocking to clinics and hospitals and reducing waiting times.”

Xamlashe could not at the time of publication say how many patients in the province are registered for the CCMDD programme but undertook to provide Spotlight with the number.

On the day of Spotlight’s visit people at some facilities brought their own chairs and were sitting in close proximity to each other in front of the gates at some clinics. Others were crowding next to the fences.

When asked about this, Xamlashe said people wait outside the gates to allow a few patients in at a time.

“A limited number would be called inside to ensure there are not too many people in the clinic,” he said. “It is everyone’s responsibility to practise good hygiene and prevent the virus from spreading. In our buildings it is  standard practice to sanitise everyone entering the clinic.”

Not returning to church – yet

Julia Carelsen, 61, from Gelvandale in Port Elizabeth believes that South Africa will never be the same again after this lockdown. She says the pandemic has exposed so many things, especially the “weakness of government”. Carelsen considers government “weak” for relaxing lockdown measures while numbers are increasing.

“I only go out to collect my medication from the local clinic and my social grant [old age grant/pension].” Carelsen says despite being an avid churchgoer herself, allowing worshippers back to church is a huge risk. Under Level 3, church attendance is allowed under certain conditions.

“Social distancing and isolation from family and friends causes loneliness, especially for me because I’m used to socialising with other women in church meetings and at our stokvel. Being cooped up at home is a bit challenging, but after my grandchildren explained to me that us elderly are the most vulnerable to this virus –  that alone made me to quit smoking.”

An off-duty nurse, Nikita Jenneker, 33, also has some reservations. Jenneker says Level 3 is “going to kill a lot of people”.

“I don’t see why people are rushing back to work while numbers are like this. People are not taking this virus seriously and I smell trouble. People need to take care of themselves.”

Other residents, like Aneal Jantjies, 41, believes lockdown has “benefited [residents] a lot”.

“It is a good idea because [the] numbers of infection are controllable. To me, it doesn’t matter what level we are, as long as we are taking care of ourselves on each level and adhere to lockdown rules.”

Lubabalo Menziwa, 36, stays in Motherwell where many of the Covid-19 cases for the Nelson Mandela Bay area have been reported. He is concerned about the impact of the pandemic on his social life.

“Lockdown is a bad experience,” he says. “[The worst] I ever had in my life because it kept me away from having proper fun with my friends, I felt like I was living like a prisoner without having my favourite beer. When the lockdown was introduced, taverns were forced to go underground and sell alcohol to their regular customers at higher prices. For a bottle of beer I used to pay R18 but it became R30. For a litre of beer I used to pay R22 but ended up paying R50.”

Under Level 3, since Monday, alcohol sales are permitted under certain conditions.

“We used to call to make orders and then we collect it with backpacks,” Menziwe recalls life under Level 4.

“When the prices became unbearable people ditched that and turned to homemade beer [imbamba].”

Imbamba is a street name for illegal homemade beer sold in the townships. This brew is made with maize malt, yeast, pineapples, sugar, bread and water.

“People usually sell it at R20 per two-litre,” says Menziwe.

Menziwe says unlike people who under lockdown decided to stay indoors “watching boring TV repeats and eating or sleeping the whole day” he found the best way to pass the time is with friends.

“We spend the whole day socialising and drinking, we are hardly ever at home. Imbamba is cheap and dangerous but I was drinking it because I’m used to drinking every weekend. Now that Level 3 allows buying and selling of alcohol, I’m going back to my regular stuff.”

For Ricardo Gallant, from Missionvale in Port Elizabeth, life is difficult as a smoker under lockdown. The 32-year-old father of two has to dig deeper in his pocket to buy cigarettes that are still banned under level 3.

“I’m paying a whopping R5 for a R1 cigarette. Demand is high since the start of lockdown. The dealers are exploiting us with unreasonable prices and I have no choice but to buy from them.”

How does he get cigarettes?

Gallant laughs when asked this question. “Cigarettes are more accessible in the township, more than alcohol, but one has to pay these ridiculous amounts. It is no use lifting the alcohol ban and leave tobacco, because the two cannot be separated. Alcohol and tobacco are always going together because there are people who only smoke when they are drunk,” Gallant says.

The ‘blaming game is over’

Police Minister Bheki Cele during a press conference of the Justice, Crime Prevention and Security cluster last Thursday said that 243,146 people had been arrested for violating lockdown regulation since 27 March.

“These were contraventions that included liquor and cigarette-related offences, illegal gathering, failure to confine to a place of residence, cross border and inter-provincial movement and business-related offences. Of these, 241 had been fined while others were granted bail. While 41,491 cases have been finalised, over 20,000 cases are still under investigation,” said Cele.

“If we don’t contain the spread of the pandemic in the province, within no time Eastern Cape will surpass Western Cape. The blaming game is over; we need to double our efforts to contain this virus in our province.” DM/MC

Peter Luhanga for GroundUp • 1 hour ago