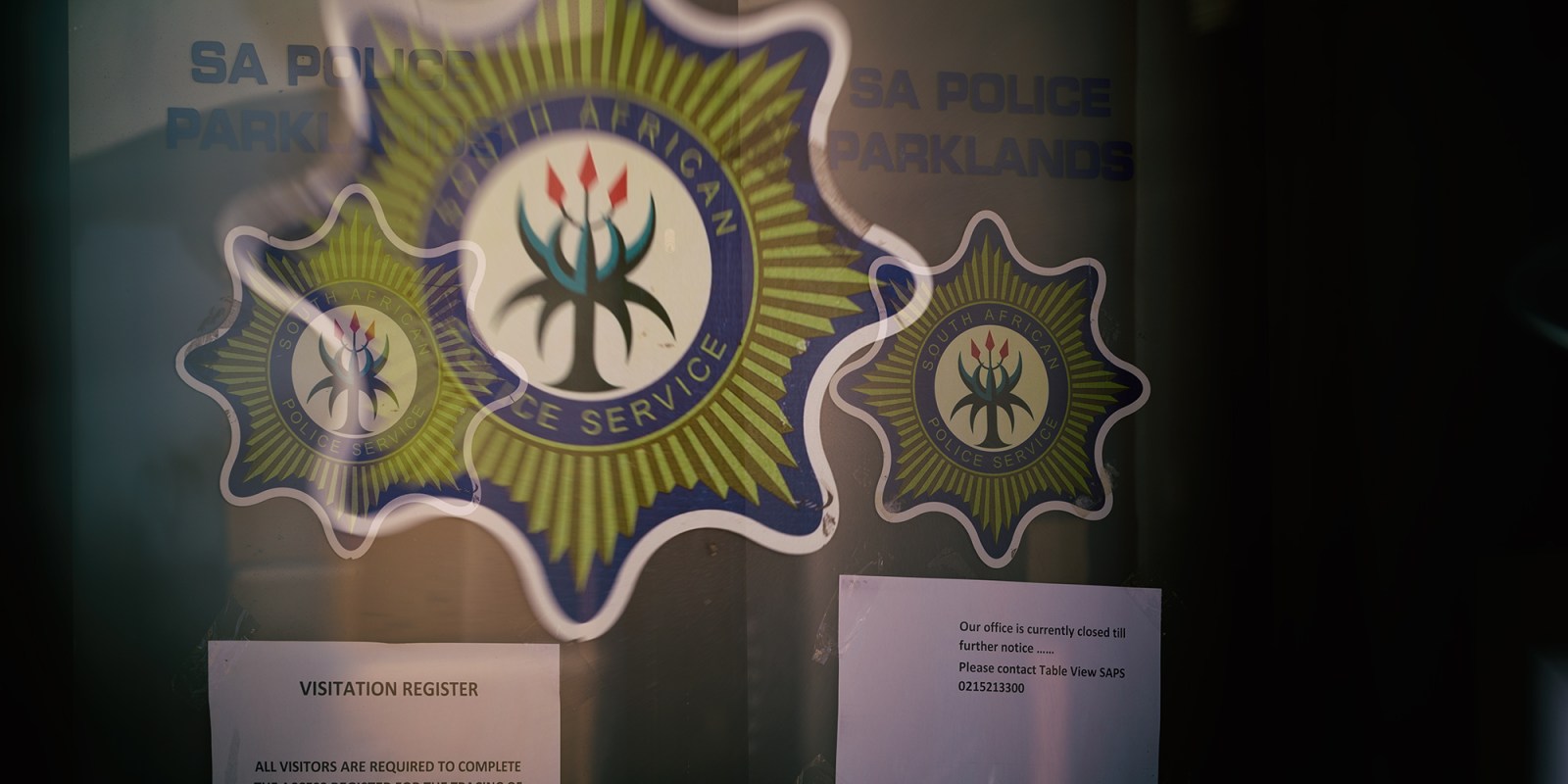 A general view of Parklands Police which has been closed until further notice during national lockdown level 4 on May 14, 2020 in Cape Town, South Africa. (Photo by Gallo Images/Misha Jordaan)

Eight SAPS members, including a former Lieutenant-General, as well as six “citizens”, have been arrested in a dramatic pre-dawn raid in Gauteng. The arrests mark the first significant swoop on corrupt high-flyers who have thrived within SAPS ranks.

The arrests, effected by a Special Anti-Corruption Task Team led by Brigadier Tony Perumal and supported by a prosecution team from the NPA’s Investigative Directorate, headed by Hermione Cronje, come after an extensive investigation initiated in 2017 by National Commissioner Khehla Sitole.

The bust will hopefully send a chill in the direction of the many who, for years, have flown under the radar, costing the state billions in endemic fraud, corruption, theft and money laundering.

“I am confident that the cases against the arrested suspects are watertight,” said Sithole.

A statement issued on 4 April by Brigadier Vish Naidoo, spokesperson for the national commissioner, set out how the task team had “been conducting a widespread intensive investigation into tender fraud related to the marking of police vehicles”.

The investigation turned up nine members of the SAPS, including senior officers, private company directors and employees, who “are alleged to have been involved in an elaborate act to defraud the State”.

The arrests follow a recent North Gauteng High Court judgment freezing the bank accounts of several companies implicated in a R56-million tender fraud for the branding of police vehicles.

That judgment was delivered on 15 May by Judge AJ Barnard in an application brought by the National Director of Public Prosecutions for the civil forfeiture of property in terms of Chapter 6 of the Prevention of Organised Crime Act.

In his media statement, Naidoo named the following suspects netted in the raids:

The pending arrest of a Lieutenant Colonel will bring to 10 the total number of police officers arrested.”

IPID has for many years been investigating tender fraud and other serious corruption within the ranks of SAPS, including cases linked to the current arrests.

Prior to his exit as head of IPID, Robert McBride spearheaded another key investigation into an attempt by Crime Intelligence to illegally procure a listening device – known as a grabber – for R45-million, days before the ANC’s elective conference in Nasrec in 2017.

McBride had, before Police Minister Bheki Cele intervened to prevent him serving a second term, been locked in a legal battle with SAPS and the Directorate for Priority Crime Investigation (DPCI) for the release of the procurement dossier which had subsequently been “classified”.

Both the Inspector-General of Intelligence, Setlhomamaru Dintwe, as well as McBride, have insisted the documents should be declassified as they pertain to procurement issues and not “national security”, as has been argued by SAPS and the DPCI. Their classification, McBride and Dintwe have argued, cannot be used to “cover up criminality”.

On 13 December 2017, three days before the ANC’s 54th elective conference, a secret meeting at the Courtyard Hotel in Arcadia took place and was captured by the hotel’s CCTV cameras.

IPID said the meeting had taken place with Inbanathan Kistiah, owner of Brainwave projects 1323CC, trading as I-View Integrated systems, from whom the R45-million “grabber” was being sourced. The grabber sells for around R2-million on the open market.

Sithole, after being tipped off by IPID, stopped the deal.

Parliament’s Standing Committee on Public Accounts has previously directed Sitole and the DPCI to declassify the documents and have them sent to IPID for investigation. McBride spent months meeting with Sithole in an attempt to access the documents, but with little success.

The R45-million grabber investigation should, at this point, be a top priority for Sitole and the task team, along with ongoing corruption investigations involving Keith Keating’s Forensic Data Analysts.

Keating has been linked to alleged corruption and procurement irregularities in the South African Information and Technology Agency (SITA) and the SAPS, amounting to about R6.1-billion.

The arrests on 4 April are the first to include high-ranking SAPS members and, as Sitole, stated, will not be the last.

“We cannot rule out the possibility of more arrests being effected in this matter. Corruption within the SAPS will neither be condoned nor tolerated”, said Sitole.

The suspects were expected to appear in a court “yet to be determined” later this week. DM