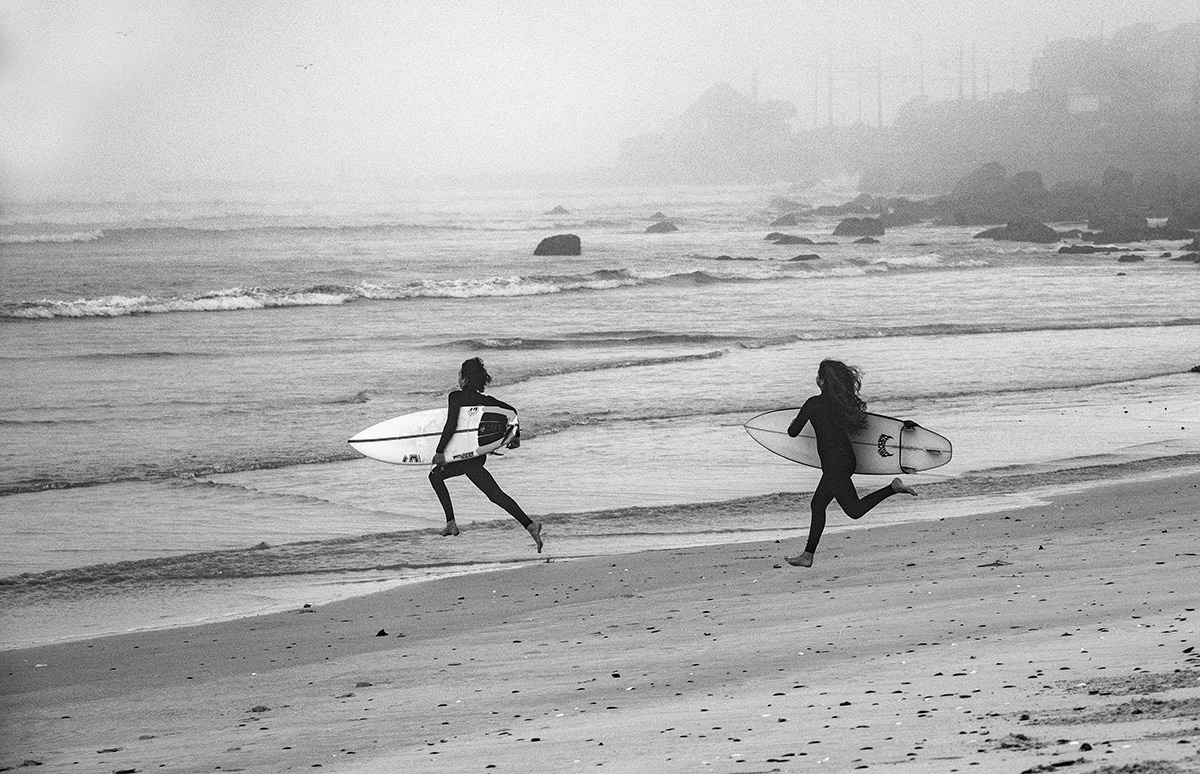 It was a weird Monday on 1 June 2020 as a cosmic Takealot delivered a neatly wrapped package from Neptune that had the raptured hordes rush into the sea.

While hundreds, if not thousands, of South African surfers went surfing in the bright blue on Monday, 1 June 2020, it remained wrapped in a grey area, a ham-fisted land of schizophrenic interpretation and mind-numbingly incongruous application of Level 3 laws.

On one hand, you have this scenario – “they jammed us up at Spot X big time. Put a full on lockdown there with roadblocks in and out of town. They had eight vehicles there one day just for one bloke. It’s a joke. The banks have been the best in five years.” This was according to an embittered local on the KwaZulu-Natal South Coast.

On the other hand, you have hundreds enjoying a magical day 1 of lockdown Level 3. At Surfers’ Corner in Muizenberg, near Cape Town, the bipolar nature of the new regulations manifested itself in the conduct of the cops themselves. With sirens and comical fanfare, two young foreign surfers were arrested early in the morning and taken to Muizenberg police station, but were released on a warning later.

However, they were the only ones arrested during a jam-packed day of surfing that saw 150 out at Surfers’ Corner in the morning, with probably 500 people collectively liberating themselves from lockdown over the course of the day.

The floodgates opened as more and more surfers paddled out in clean 2-4 lines with perfect light offshore and deep blue skies. You sensed that the police were increasingly reluctant to clash with people brimming with joy. I overhead one jovial law enforcement officer amicably tell a small clump of onlookers that access to the beaches was not allowed, but surfing was. “You do what you have to do. I have to do what I am told.”

A surfer walked up to him and asked the cop to zip up his wetsuit. He obliged without hesitation, then politely watched the surfer walk across the forbidden sands to paddle out. It was a wondrous sight. I felt like going up to him and giving him a hug. Oh wait. Covid-19. What a screwed up world this pandemic has brought.

And then we saw a momentous shitshow erupt in the land of the Orange Thug, who stokes the fires with xenophobic calls to arms. The only thing I can latch onto are the moments of redemption. Like when protestors shielded a policeman from other protestors. Like when police – from New York to Minnesota – took a knee in solidarity with the outpouring of anguish and anger over the death of George Floyd.

When you hold this against the bleatings of a few surfers in South Africa, it sinks home how silly it all sounds, righteous as many of us feel. Perhaps the silly will now slow down on social media, while this burning and truly horrifying conflagration, erupts over the pond.

But back to our little endless bummer reality. At other places around South Africa, there were arrests, notably at Kalk Bay reef earlier in the week when a big storm brought in a gang-busting south swell. Up in KwaZulu-Natal, a few crews have been surfing the quieter spots on the North and South coasts each day, but there is a lot of enforcement at all the main beaches, including the Bluff. The police presence has kept folks out of the water. With such high visibility “people are just too nervous to push things”, said a surfer from Durban.

All in all, surfers who have surfed as their way to “embrace” the new Level 3 have been relatively unmolested. Spots around False Bay all had waves, and they had surfers. On the other side, and up the West Coast, it was absolutely going off. In a nature reserve on the Cape Peninsula, surfers walked in to surf. Several were accosted by rangers, but managed to get in and out of the water.

While some police empathise with surfers, others literally apply the law to the last letter. This is the DNA of officialdom. Sometimes, you’ll just get a warning when you park on a red line. Other times, you’ll be handed a fat fine. But both personality types of cops have been told to stop people, and arrest some.

Now that the dam has burst, it will be harder to police, and the police themselves are not taking action, perhaps because they believe the regulation is about to change. One surfer said that the police at Muizenberg believed that by the end of the week, the beaches would be open.

However, a source from organised surfing – a perceived oxymoron (certainly from those who try to engage with surfing with its bizarre duplexity in voice and action) – said he believed this to be unlikely: “The government is worrying about saving the country from economic meltdown while trying to stem a pandemic that is modelled to wreak major medical havoc on our nation. They don’t see minority sports as a priority.”

Also, with Nkosazana Dlamini Zuma’s unwavering crusade to prohibit us into the shape of a carton of Camel filters, beaches look set to stay shut. But there are grey areas galore. The official said that people should surf if they want to surf, but it was foolish to defiantly rant on social media about it, telling all and sundry where and when they were going to go surfing.

“Most of us break the law, but we don’t brag about it. If you bust the speed limit, do you take a photograph of the speedometer, and post it on Facebook?”

The revolution will not be televised

Thankfully, the revolution will not and has not been (entirely) televised. The thumping of chests on social media is a relatively small number compared to the many people quietly surfing all around South Africa anyway, and have been since day 1 of Level 5.

The techniques vary, but all aim to avoid detection when entering or leaving the water. Some people stash their gear in the bushes, or hike into a remote area where there are no roads. Others use boats. Others paddle in or out in the dark. Some have been known to hitch a ride with a nuclear submarine. Okay, not that one.

For some in small surfing towns, or in rural locales such as farms and small-holdings that abut surf spots, it’s a matter of walking out your front door. One cop at Muizenberg even jokingly said we should use helicopters.

It’s all a bit of a crazy, noisy show, like a thrash metal gig manned by maniacal groupies chucking live grenades on stage just as a cartoon-balled melee on the mixing deck seesaws between the squeal of the lead guitar and the crescendo of the drums – all set to the screech of a drug-addled band screaming the chorus simultaneously at the wrong pitch.

For surfers who think surfing is the only sport that has been wronged, have a thought for golf, tennis and canoeing, to name a few. Golfers are suffering. They have been shut down in a similarly irrational fashion, given that physical distancing is easy on a golf course, if not a prerequisite. Only allowing professionals to practise, and cutting out all the recreational users, will result in the closure of golf clubs all over the country.

Our stadium is the ocean and beaches are closed

Many sports clubs are haemorrhaging. While professional athletes can train at their fields and in their stadiums, where do pro surfers train? Our stadium is the ocean and beaches are closed. This pro athlete thing is also full of red tape, with the requirement of a 14-day quarantine, and more paperwork required from government and hoops your administrative body must jump through, making it next to impossible to manage, let alone decipher.

Robin de Kock of Surfing South Africa is part of a collective network of non-contact sports which have been trying to secure a meeting with the Minister of Sports, Arts and Culture, but it’s been hard to attract Nathi Mthethwa’s attention via just one line in a tangled mess of crossed wires within a convoluted spaghetti factory of bureaucratic discombobulation.

They’re seeking clarity on training venues for so-called professional athletes. They are allowed to practice their sport, but where? What about ocean-related sports if beaches remain closed? They also want to open up the Level 3 law to recreational practitioners (take note graduates of the University of Facebook who vent before they verify). But the non-contact collective is one voice in a crowd clamouring for the minister’s attention.

A peculiar anomaly is that even recreational fishing is allowed under the lockdown, which is great – people need to eat – but it is another reason that makes the continued closure of beaches more difficult to police. Recreational fishing is not seen as a sport anymore and is now managed by the Department of Environment, Forestry and Fisheries.

“All fishing, including recreational fishing, is permitted with the exception of charter fishing,” Minister Barbara Creecy told the media, provided fishers had a valid permit – and practised all regulations relating to physical distancing, health protocols, movement and the prohibition of groups and gatherings.

The tide is turning. The dam is bursting. The floodgates are open. The cliches are flowing

As for surf shops and surf schools offering “permits” to surfers so they can surf, just be aware that this is illegal, and could result in you and the source getting arrested. The only permits that the SSA can issue are coaching permits.

I know we’re trying to make sense of the nonsensical and maybe even help each other, but some of these smacked of a PR stunt. But not to worry people. The High Court in Pretoria recently handed down a judgment that declared Covid-19 lockdown alert Level 3 and Level 4 as invalid, and unconstitutional, although this declaration was suspended for a period of 14 days, and government, while noting the decision, says Level 3 remains in force.

Fear not. The tide is turning. The dam is bursting. The floodgates are open. The cliches are flowing. Simply put, the authorities are not focused on surfing right now, so if you want to surf, go surf for heaven’s sake, but just don’t be doff about it. The law is on our side … every now and then (hopefully when the surf is cooking).

Just time it right. Like a gap between sets. And wear your big-person pants if you get bust, but here is a little tip: DO NOT sign an Admission of Guilt, rather fight it in court. You won’t lose. DM

This article by Steve Pike (aka Spike) was first published on Wavescape.