This is a summary of the trending, highest impact, and most active themes and their narratives related to social cohesion and division in South African public-domain social media conversations on 1 June 2020.

The reopening of schools, concerns about the impact of alcohol sales and an expected spike in Covid-19 cases were dominant topics on social media on the first day of Level 3.

While National Minister of Education Angie Motshekga explained that many schools were not ready to reopen, and 3,000 of them had not yet been supplied with water, the Western Cape Education MEC’s decision to reopen schools in the province anyway drove most of the conversation, with close to 500 retweets and over 1,000 likes by this morning.

Twitter users expressed frustration over Minister Motshegka’s late announcement that schools would not open as planned. One user asked: “But did you not know at Sunday morning 9am that you would not be ready? Why wait until 6pm?”. Minister Motshegka and the government received strong criticism as people called for greater consistency in these uncertain times.

In an interview on eNCA Professor Salim Abdool Karim clarified that two children had died of Covid-19, not four as had been reported. He said it was not clear whether other medical conditions caused the death of one child. Interviewer Sally Burdett commented: “if you die with the virus, you don’t necessarily die of the virus”.

The @eNCA video at 19:16 was viewed close to 10,000 times by this morning. The tweet reads: “Medical experts are warning South Africans to expect huge increases in coronavirus cases as the country enters lockdown Level 3”.

As alcohol sales resumed after two months of prohibition, a video tweeted by @TeamNews24’s tweet showing people standing in line and dancing outside the Makro Liquor Store in Silverlakes, Pretoria was viewed more than 18,000 times.

Expressing less excitement, EFF leader Julius Malema highlighted the dangers of alcohol in the fight against the pandemic: “Alcohol contributes nothing.” This tweet  included Malema saying “comrades, lose votes on principle” received over 2,000 likes and retweets and the video had been viewed close to 40,000 times by this morning.

Health Minister Dr Zweli Mkhize urged the public not to panic buy and over-indulge in alcohol. Excited members of the public tweeted videos of themselves happily drinking beer. One tweet, posted just after bottle stores at 09:00, depicted a drinker downing “My first Corona” – it was retweeted more than 1,000 times and viewed more than 200,000 times. 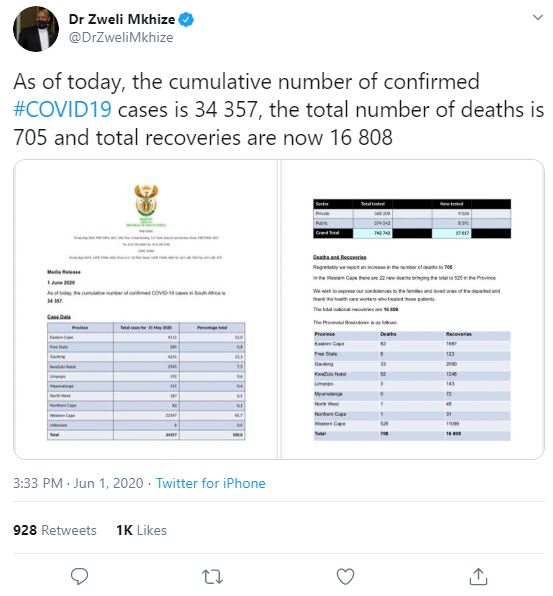 As international outrage over the killing of George Floyd grew, president of the Open Society Foundation and former US ambassador to South Africa, @patrickgaspard,tweeted: “To my friends in South Africa, Thank you for your solidarity in the upheaval following the murder of George Floyd. But please know that I stand with you as you mourn Collins Khosa and others who have been brutalised by police in your lockdown. Injustice to one is injustice to all.” The tweet generated 1,000 retweets and over 3,300 likes.

CEO of Ditshego Media and Vice President of PRISA @TebogoDitshego was among those who showed appreciation, retweeting with the message “Thank you Ambassador, much appreciated”.

South African social media and news outlets were dominated by conversations around incidents of SAPS and SANDF brutality, sparked by the global protests over Floyd’s death at the hands of police in the US.

One retweet by the Claude Leon Foundation Chair in Constitutional Governance at the University of Cape Town, @pierredevos, shed light on the history of police violence in South Africa: “Unfortunately, police violence did not start with lockdown. IPID Report 2018/19 states: * number of deaths in police custody 214 * number of deaths resulting from police action 393 * number of rapes by police officers 124 * number of reports of assault and torture 4,105.” This tweet gained traction, with 269 retweets and 293 likes.

Chairperson of the EFF @Adv_Dali_Mpofu retweeted a post from 28 February 2020 which depicted the Marikana Massacre. Mpofu’s retweet said: “I have new found respect for our African American brothers & sisters for taking to the streets even in these risky times of Covid-19. Here we had 34 George Floyds in one day! People just went on with their normal business..& later rewarded one of the killers & made him President!” This tweet generated over 2,900 retweets and 5,800 likes.

On Day 67 of lockdown, many conversations on social media discussed the mental and emotional costs of lockdown. “Mental Health” was the fourth topic by burst, indicating an emerging trend. “Global Pandemic” was the ninth topic by volume, with 1,065 mentions.

The combined impact of the coronavirus, economic losses and lockdown regulations is taking its toll on mental health. Difficulties people faced in 2020 trended. @NobsMathaba tweeted: “We are fighting racism, a global pandemic, online learning. Our mental health. Our childhood traumas. YiFILM.” By this morning the tweet had been liked 4,200 times and retweeted 1,600 times. Responses to the tweet tended to be supportive. 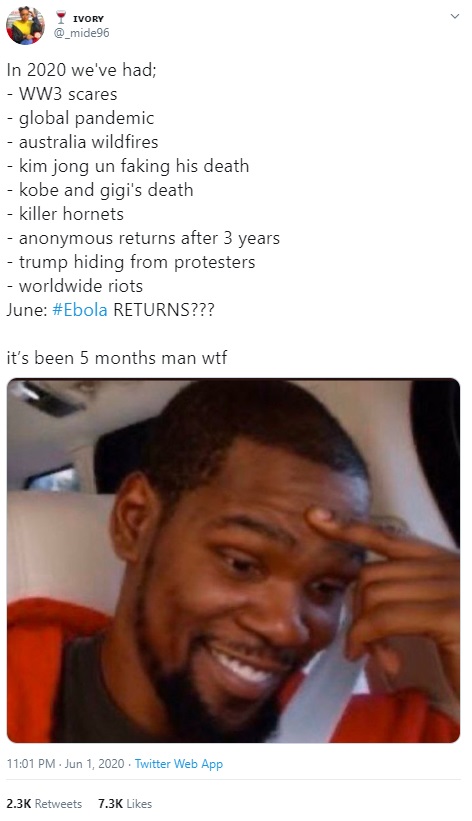 Linked to concerns around mental health and stress over Covid-19 is a growing online sentiment that people are already “over” 2020, just halfway through the year. Some joked that they would like to start over, or cancel the year altogether. @_mide96 tweeted: “In 2020 we’ve had; – WW3 scares – global pandemic  – Australia wildfires – Kim Jong Un faking his death – kobe and gigi’s death – killer hornets – anonymous returns after 3 years – Trump hiding from protesters – worldwide riots June: #Ebola RETURNS??? it’s been 5 months man wtf”. This tweet, at 23:00, was retweeted 2,300 times and liked 7,300 times in the next 10 hours: the 84 comments included shock, horror and a good measure of sarcastic agreement. DM