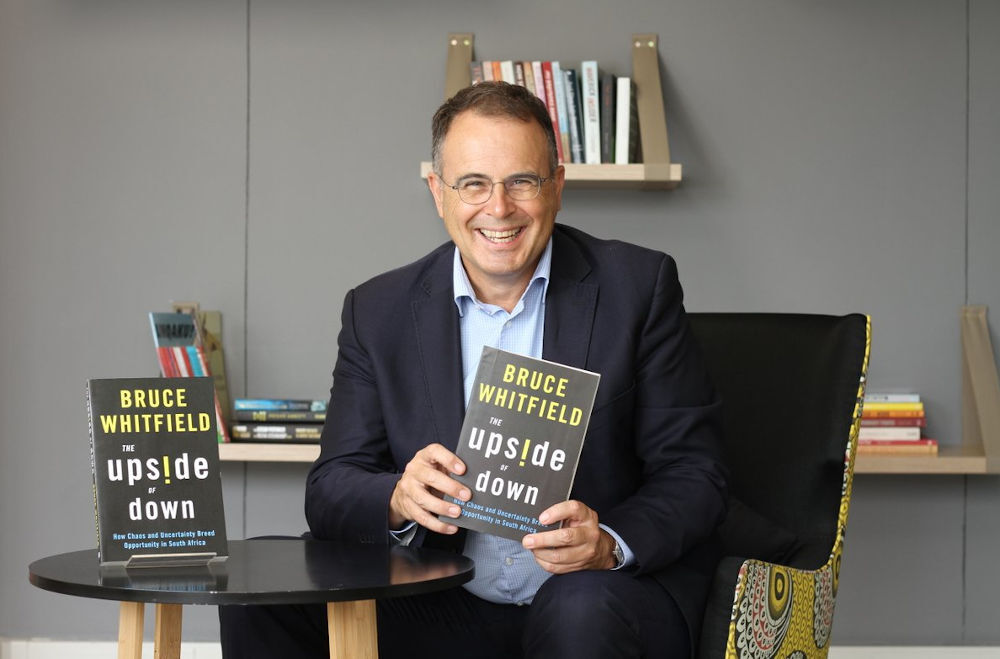 South Africa is a land of crises. But within the crisis in which the country finds itself today lies an enormous opportunity for renewal, growth and optimism, says Bruce Whitfield in his new book.

In a world of fake news, deep-fakes, manipulated feeds of information and divisive social-media agendas, it’s easy to believe that our time is the most challenging in human history.

But, according to Bruce Whitfield, that’s just not true.

In The Upside of Down, the business broadcaster extraordinaire lays out his belief that a time of chaos and uncertainty is a time of uncommon opportunity, if you have the right mindset.

The Upside of Down was released just before the coronavirus pandemic took hold, but the advice Whitfield offers and the stories he shares are especially relevant to a South Africa seeking to emerge from the Covid-19 crisis.

You may encounter many defeats,
but you must not be defeated.
– Maya Angelou

I look at it now: an extraordinary array of books detailing the failings of South Africa and its corporate and political leaders over the last decades. The titles stare malevolently from the shelves. There’s Jacques Pauw’s The President’s Keepers, Rob Rose’s Steinheist, Pieter-Louis Myburgh’s Gangster State, RW Johnson’s How Long Will South Africa Survive? … and a slew of many other similar doomsday books, whose rate of publication has escalated in recent years. Together they tell a story of a country on the verge of self-destruction. It’s a wonder there is a country left to speak of.

What in fact has ensured that South Africa has not collapsed in on itself?

For one thing, civil society has been pivotal in fighting for the rights of citizens, especially the marginalised, and forcing the hand of government, often through the courts, to acknowledge its responsibility, its duty of care, and its obligations under the constitution. The judiciary too has been crucial in steadfastly upholding the rule of law and ensuring that the hard-won Constitution has remained the lodestar of our society. Moreover, without a free media highlighting some of the worst excesses of public- and private-sector malfeasance, the South African story would be very different too.

But there is another story to tell as well. It’s about the role that many companies and some of their bosses play, often unseen in the public domain, in guiding, cajoling and influencing the country and its leaders in the pursuit of a sustainable future.

This is often derided as a new form of State Capture, but as delegates to the 50th World Economic Forum gathering in Davos in January 2020 were reminded, there is a complex inter-relationship between government, business, labour and civil society which creates a series of checks and balances that occasionally do veer out of kilter, but generally serve to keep all interest groups in hand. Just as business requires political stability and policy certainty to thrive, governments need profitable businesses to keep creating jobs that provide the growth that pays the taxes that can service the needs of voters. Straddling all of the vested interests is a range of civil society bodies, acting for a multitude of interest groups, all seeking to influence the way in which nations develop and striving to keep key role players honest. It’s imperfect. But it’s the best system developed so far.

The political settlement of 1994 not only brought democratic rights and freedoms in South Africa, but it also provided the conditions in which the economy could flourish and businesses could contribute to the economic growth of the country and the building of a better life for all. Foreign investors, who for years had shunned South Africa because of the apartheid ideology, began to return and to invest; while local conglomerates, which had been built up by virtue of the fact that they had nowhere else to invest their capital, began to unbundle and spread their wings internationally. There was a groundswell of optimism and fresh energy as bold entrepreneurs saw new opportunities in both the domestic and global environments and created new enterprises which contributed to job creation and overall economic growth. For the first decade or so of the democratic era, there was a strong sense of hope that South Africa might just make it.

But that sense of optimism has been eroded in recent years and South Africa is now running out of time and money. The ANC-led government is stuck in an invidious position in that it has made big promises to an increasingly frustrated electorate and, unless it can conjure up growth quickly, it will not have the financial resources to make good on its pledges to voters. Unemployment has risen to unsustainably high levels. Service delivery at local government level is failing. Most provinces find themselves in a dire financial state and national government has borrowed almost to the hilt. Not one district in Free State received a clean audit in 2019 nor did one of the 15 largest state-owned entities in the country. You can’t fix it if you can’t measure it.

As I write this, rebellions have welled up in Chile, a resource-rich, deeply unequal society much like South Africa. In Lebanon, too, people from all walks of life have taken to the streets in a highly organised protest movement. Following the events of the Arab Spring which saw the overthrow of the likes of Mubarak in Egypt and Gaddafi in Libya, it is not unlikely that a similar scenario could play out here.

South Africa is a deeply challenging place in which to live and work – especially if you are poor, have little education and live in an under-serviced community. But it’s in the very crisis in which South Africa finds itself today that there lies an enormous opportunity for renewal, growth and optimism.

Although this came to me third-hand and I cannot vouch for its provenance, the founder of an Israeli start-up is supposed to have told a recent gathering in Johannesburg: “You can make a lot more money out of solving misery than you do out of providing comfort.”

It doesn’t really matter who said it. If entrepreneurs in South Africa can find ways to alleviate the suffering of people who are otherwise helpless and unsupported, so as to make them productive members of society, then there is a better-than-even chance that the great democratic experiment begun more than 25 years ago in 1994 might just be fulfilled.

Because, if you want problems, you have come to the right place. South Africa is a land of crises. With pervasive inequality and too few opportunities for people to dig themselves out of the poverty trap into which they have been born, the country has the potential to sleepwalk into disaster. Business confidence is at multi-decade lows, the tax base is shrinking, migration is on the rise, and unless today’s start-ups can be encouraged to grow and invest in this market, then the grim prognosis of many of the books on my shelf may just come to pass.

Yet it doesn’t have to be that way.

At least part of the answer lies in the latest book on my shelf. It’s by the Nobel Prize-winning economist Robert Shiller, called Narrative Economics, and it is all about how popular stories drive economic events. In a world of disinformation and internet trolls, where (certainly in the digital world) the loudest voices appear the most compelling, “narrative economics” has extraordinary power. It can improve our ability to predict, prepare for, and mitigate the damage of financial crises, recessions, depressions and other economic disasters.

Ideas move markets. The Bank of England made it someone’s job to monitor Donald Trump’s Twitter feed after he became president because his musings did move markets. It doesn’t matter whether they are true or not; if they gain traction, they have influence.

Shiller says the stories we tell ourselves about the world drive our behaviour, and if enough people buy into the same stories they will impact on the world at large. Stories influence the way we think and behave and, at scale, influence markets, affecting whether you invest or divest, and shaping your view on the long-term sustainability of a country.

Imagine if we told different stories.

In line with this kind of thinking, my book will tell you some of the stories of the extraordinary entrepreneurs who built globally competitive businesses in South Africa despite the upheaval, uncertainty and negativity prevailing at the time.

It will also introduce you to a new generation of courageous young people creating businesses that seek to solve the myriad problems South Africa faces today. These are the rebels, renegades and problem-solvers who, rather than allowing themselves to be caught up in the pervasive negativity, get stuck in to create solutions for the future.

They are considerably more useful to follow than the rascals, reprobates and problem-causers who litter the pages of most non-fiction titles about South Africa today. The latter do nothing for your sense of well-being and feelings of optimism for the future. Many of them should be in jail but are fighting tooth and nail to remain free so as to continue their career of looting and plunder.

There is a note just under the light switch in my children’s music room at school. It reads:

While you were arguing about the level of the water in the glass,
I drank it.

Upside of Down: How Chaos and Uncertainty Breed Opportunity in South Africa by Bruce Whitfield is published by Pan Macmillan South Africa (R310).