By Centre for Analytics and Behavioural Change• 28 May 2020 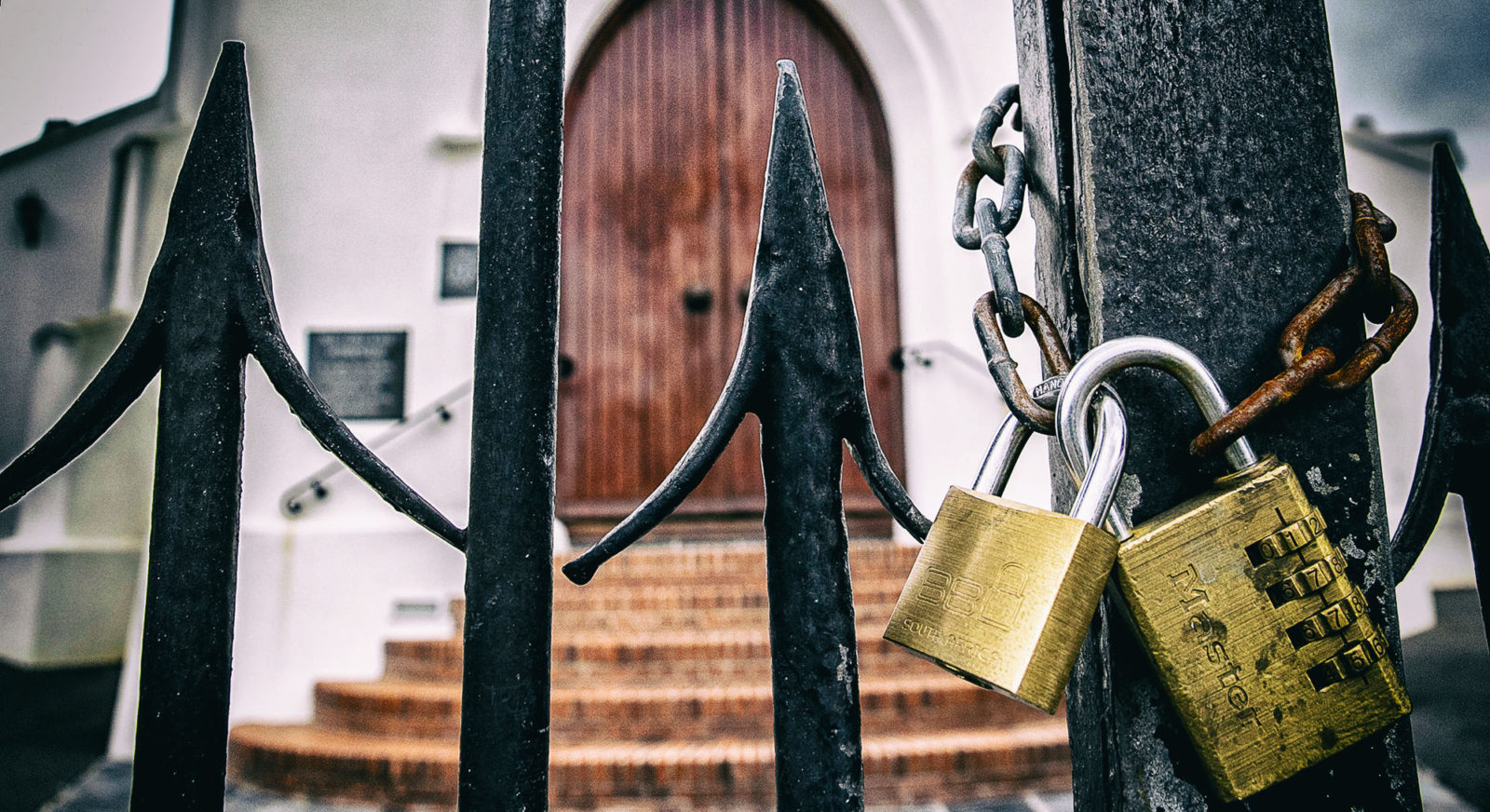 CAPE TOWN, SOUTH AFRICA – MAY 27: A general view of Durbanville Gemeente on May 27, 2020 in Cape Town, South Africa. President Cyril Ramaphosa announced on Tuesday, 26th May 2020 that places of worship such as churches, synagogues, mosques, temples will be able to re-open once the country moves to Level 3 on 1st June 2020. (Photo by Gallo Images/Jacques Stander)

This is a summary of the trending, highest impact, and most active themes and their narratives related to social cohesion and division in South African public-domain social media conversations on 27 May 2020.

The resumption of religious gatherings under Level 3 dominated social media and news conversations for the second day in a row. Twitter posts about gatherings dominated three of the top 10 posts by reach and impact yesterday.

Lockdown regulations were the 8th biggest topic of the day by volume, driven by SA Zionist Church Bishop Bheki Ngcobo’s view that 50 people were too few for his gatherings  – and his request for compensation over lost revenue during lockdown.

Bongani Bingwa, host of the 702 Breakfast Show posted Bishop Ngcobo’s viewpoint on Twitter. It quickly became the top post by reach and impact for the day, with nearly 2 000 likes, retweets and comments.

The EFF’s Mbuyiseni Ndlozi tweet from 26 May “what’s next? Gyms, restaurants, sports, clubs & concerts?” gained massive momentum as likes, retweets and comments grew to over 7,000.

The DA questioned the rationale behind why one can go to church but cannot get a haircut.

Social commentator Tumi Sole’s post from 26 May continues to gain traction, reflecting public sentiment. This post refers to South Korea and states “I’m just reminded of #Patient31 Also, have we not learnt anything on churches being epicenters of Covid-19?”. The post received almost 3,000 likes, retweets and comments. 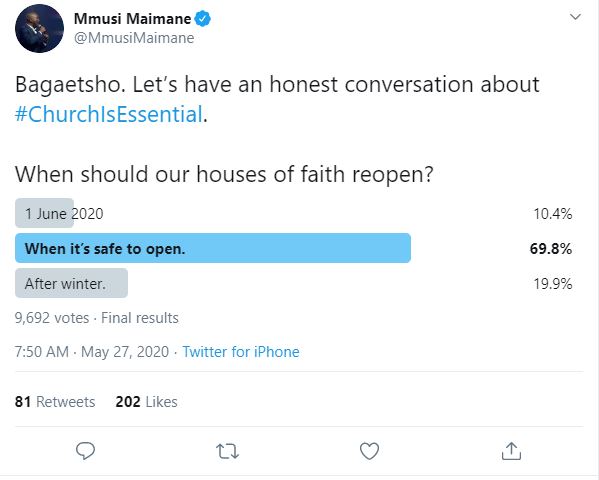 Mmusi Maimane, former leader of the DA, sought public opinion on #churchisessential, asking “When should our houses of faith reopen?”. The poll received nearly 9,700 responses: 69.8% said “when it’s safe to open”, compared to only 10.4% supporting the planned opening on1 June.

@MorningLiveSABC ran a similar poll and received over 180 comments by this morning, making it the 2nd top post for the day by reach and impact.

Radio 2000’s poll received over 400 responses:. nearly 50% of respondents answered with “Big Mistake”, around 12% were happy churches would finally open, and about 27% said: “Let’s open everything now”. 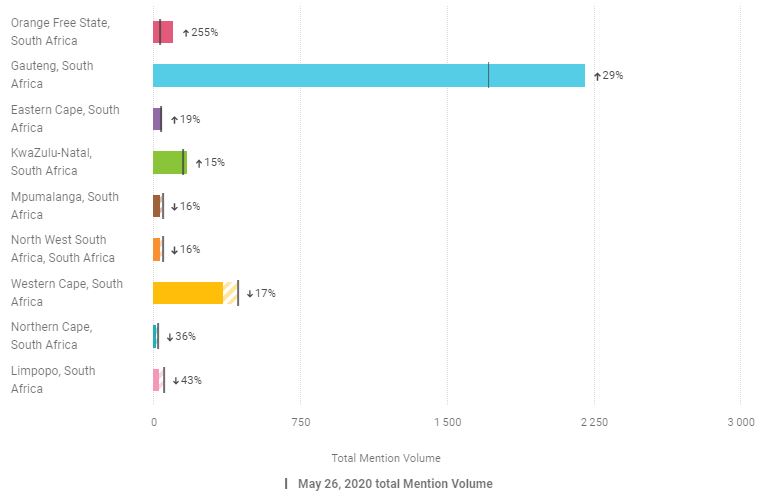 Breaking local and international news trended as the 5th biggest topic by volume and the10th by burst, indicating the public’s desire for new information to address ongoing anxieties over the pandemic.

Locally, Health Minister Dr Zweli Mkhize’s announcement to Parliament that South Africa was likely to see a peak in infections around mid-July or mid-August was widely shared.

As the number of Covid-19 cases climbs, the impact is being felt by hospitals, frail care centers, prisons and schools.

@Tshidilee tweeted at 21:31 that Netcare Sunward Park in Boksburg had closed theatres and diverted ambulance emergencies after staff members had tested positive. The post has already been retweeted 172 times. A News24 article about Health and Safety at Groote Schuur Hospital drove conversation within the topic “tested positive” after 69 staff members tested positive. News about an outbreak at a frail care centre in Port Elizabeth was tweeted by several Twitter account holders, including @pierredevos and @ferialhafajee, after 29 tested positive for Covid-19.

A tweet by News24 contributed to the conversation, saying prisoners in Mpumalanga feared for their lives because of the virus. Tweeted at 16:45, the post has been retweeted more than 50 times and includes close to 100 comments.

International news about the rising global death toll drove conversation: a tweet by @goodable went viral with over 60,000 retweets and close to 300,000 likes. It shows the smiling New Zealand Prime Minister Jacinda Ardern: “This is what winning looks like”, it says, announcing that the country no longer has any patients being treated for coronavirus in hospitals. 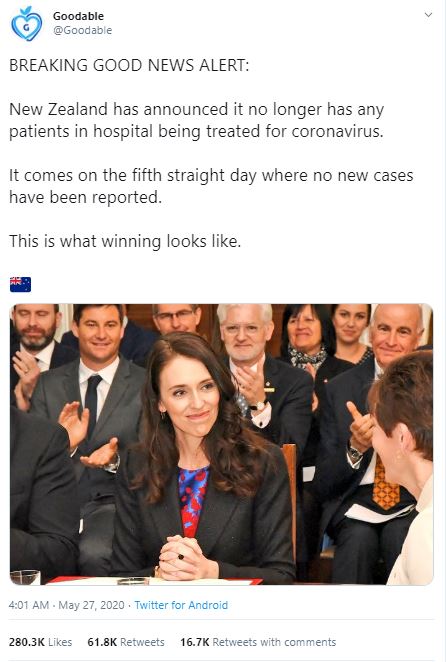 At 23:50 @AFP tweeted that the US coronavirus death toll had topped 100 000. Brazil followed in 2nd place with 25 000 deaths and 400 000 cases. @ZBCNewsonline tweeted that Zimbabwe had recorded 76 new cases, 75 of whom were people returning from South Africa and Botswana. Tweeted at 18:06, the post has already been retweeted 245 times, sparking conversation about Zimbabwe closing its borders to South Africa and Botswana.

As the impact of the coronavirus pandemic on South Africa’s economy deepens, with more people seeking economic relief, Sassa has been criticised for its inefficiency in paying out grants.

@AdvoBarryRoux tweeted a photo of people wrapped in blankets outside the Mdantsane City SASSA offices, waiting from 18:00 the previous night for the offices to open at 08:00. The tweet was retweeted 115 times, with comments expressing sympathy for their plight. 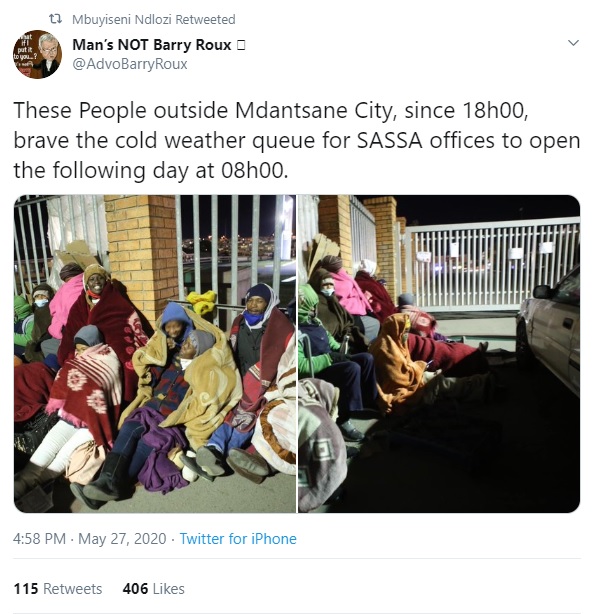 Kwaito star L’vovo Derrango released a video pleading with President Rhamaphosa for financial relief. @eNCA tweeted the video, which was aired on national news. L’vovo explained that he would be fine, but there were many in the media industry who were struggling and needed financial support.

Minister of Co-operative Governance and Traditional Affairs, Nkosazana Dlamini Zuma, briefing to the National Council of Provinces on Tuesday became a big online topic yesterday: she said unemployment was expected to reach 50%. DFA quoted the Minister: “Our economy has declined, not only because of the lockdown but because we have been downgraded and we have about a thousand companies whose employers have applied for UIF. The tourism sector in particular will be the hardest hit because we have closed the borders of the country and we have closed tourism in the country. Some of the businesses will not survive and vulnerable households have lost a lot of income.”

Minister Dlamini Zuma also featured in online conversations after her motivation behind maintaining the ban on selling tobacco was submitted to the high court in Pretoria on Wednesday. Minister Dlamini Zuma came under extensive online criticism for her prohibition of tobacco sales at Level 3.

@karynmaughan quoted the minister saying that many South Africans would quit smoking because of the increased prices and lack of availability during lockdown, especially young and poor South Africans.

@News24 tweeted about Minister Dlamini Zuma’s documentation supporting the smoking ban. Of the 85 comments on the tweet, the majority were critical of the government’s continued ban of tobacco products. The tweet was retweeted 36 times and liked 62 times.

The Commissioner of the SA Revenue Service, Edward Kieswetter, featured in online conversation yesterday after saying that the coronavirus pandemic provided South Africans with an opportunity to reimagine our economy and to address historical inequalities. @News24 summarised Kieswetter’s webinar talk hosted by Investec: “we have not been successful at addressing the inequalities. We are still the most unequal society in the world. In times of crisis the poor are the most vulnerable”. By this morning the tweet had been liked127 times and retweeted 72 times. Of the 114 comments on the tweet , some criticised the ANC government and spoke of increased corruption and financial losses, while others welcomed Kieswetter’s comments and believed economic redress was an unresolved issue in South Africa.

The day’s 2nd biggest topic by burst was “police brutality”, driven mainly by a tweet made @PrettyboiiDB-9 about the killing of George Floyd, a black man, by police in the United States.

@PrettyboiiDB-9’s tweet went viral with over 200,000 likes. Twitter users were unanimously angered by the news of Floyd’s death: “Pandemic stopped everything but racism and police brutality” said one. Responders commented that they did not understand hatred, and this killing was not even police brutality, it was cold-blooded murder.

@MbuyisenNdlozi tweeted: “They have done it again, Killed another black man… Anti-black racism is a global permanent pandemic”. His tweet was liked more than 2,000 times and has been retweeted close to 700 times, making it the third highest by reach on the day. DM

Lucas Nowicki for GroundUp
Save 2 mins