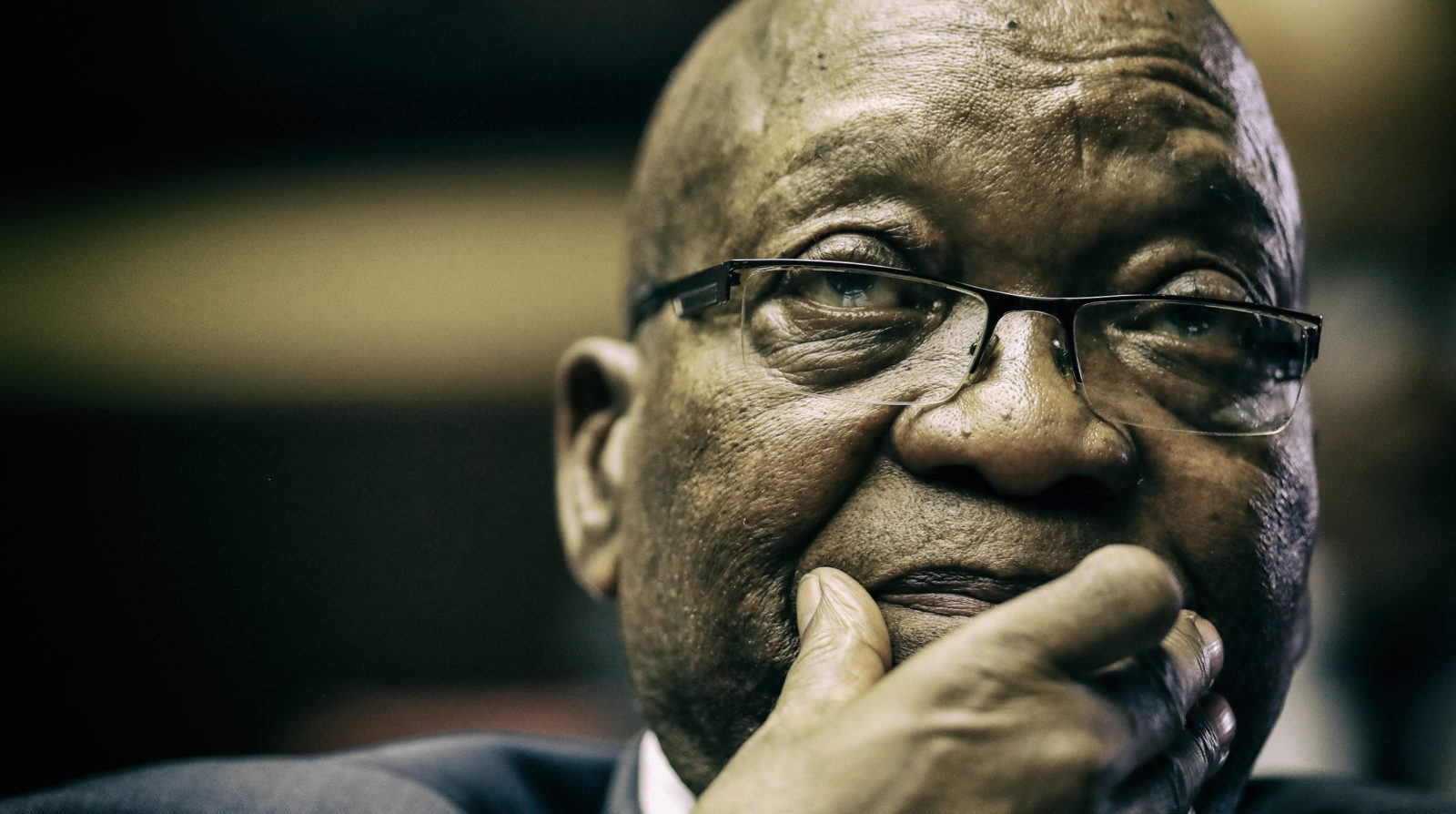 Less than a week after former president Jacob Zuma pegged the country’s judiciary alongside that of the apartheid state, the former president is attempting to direct when his corruption trial should be heard.

While Jacob Zuma was making his “feelings” on the judiciary public in episode seven of the ongoing YouTube “reality” series, Zooming with the Zumas, the prosecuting team for The State v JG Zuma and Thales South Africa (Pty) Ltd was preparing to amend the original Indictment to include further charges against the former president.

Correspondence between the deputy director of public prosecutions, Billy Downer, and the judge president of the KwaZulu-Natal Division, Achmat Jappie, dated 21 May 2020, indicates that a number of payments from the Shaik/Nkobi group had been discovered during a review of the evidence.

That’s the one upside of long court delays. The prosecution team, and Downer, in particular, had years to go through evidence while the target fought street by street, building by building.

“It is correct, as you suspected, that the State will apply that the Indictment be amended to include a number of payments from the Shaik/Nkobi group to Mr Zuma that FTI discovered during their review of the old KPMG report and the production of the new report that was handed to the defence in 2019. The amendment essentially entails the replacement of the schedule to the Indictment to include the new figures,” Downer informed Jappie.

Downer was writing to Jappie to firm up the court allocation and dates for what will be Zuma’s final run of a legal gauntlet he has navigated for most of his career as a senior politician in democratic South Africa.

While the State wishes the matter to be set down for pre-trial in October 2020 and trial in February 2021, Zuma, through his legal representative, Musi Sikhakhane, has indicated that he will “probably not move from his position that a trial date later than October will not suit him”.

Advocate Barry Roux, for Zuma’s co-accused, Thales, however, was flexible and “would find suitable either an October 2020 or February 2021 date”.

Downer said he would draft a pre-trial minute for Zuma’s appearance on 23 June 2020 where it would be indicated “that the State wishes the matter to be set down for trial in February 2021, with a further pre-trial in October 2020 to confirm the progression of the outstanding pre-trial issues…”.

Zuma has been paddling legal rapids at almost every turn, as he has done so ably for more than 20 years.

Just as Downer was ready to set a court date and get cracking, the Derek Hanekom “enemy agent” “spy” tweet by Zuma surfaced like a U-boat and back into the news cycle.

The tweet by Zuma that Hanekom was an “enemy agent” is still up on the platform despite a high court ruling that Zuma should take it down. It was a ruling later upheld by the Supreme Court of Appeal.

(Now Zuma’s lawyers are taking the matter to the Constitutional Court. Go figure. Must have lots of socks to sell.)

That the former president even bothers with the courts is surprising though. This, given his “feelings” on the judiciary which he shared with the nation and his son, Duduzane, in Zooming with the Zumas.

“I have a feeling, which I think is correct, that there are certain courts that when my matter appears, their attitude is almost the same as what I went through as a freedom fighter during apartheid, and now as a free man during democratic time,” said the former president of the Republic of South Africa.

Before the Hanekom matter and how he “feels” about the judiciary, it was journalist Karyn Maughan who pointed out that Zuma, in his application to stay his trial, let slip “one very damaging admission that may be used against him if and when he goes on trial”.

“For the first time, Zuma has revealed why he chose not to testify in the trial of his former financial adviser Schabir Shaik, who was convicted in 2005 of corrupting him with multiple payments and benefits and facilitating a R500,000 a year bribe for him from French arms company Thales,” wrote Maughan.

Msholozi has always maintained he should have stood trial with Shaik. However, he revealed to the Constitutional Court that he would have only taken the stand if he were granted immunity.

In his submission to the Constitutional Court Zuma said, “Absent an unequivocal grant of immunity by the NPA to me it would have been ill-conceived and highly risky for me to testify for Shaik without waiving my guaranteed constitutional rights, including rights to silence and against self-incrimination.”

(The wheels of the bus go round and round.)

Downer told Jappie he hoped that apart from the matter of the court dates, there would be more clarity “on the state of lockdown and the extent to which we can try to run criminal cases timeously and efficiently”.

Sikhakhane and Roux, said Downer, had both indicated that “a trial commencing in the fourth term of 2020 would suit them, that being October 2020”.

But this date, said Downer, would bring with it “too many uncertainties”.

“In the result, we will request a trial date commencing in the first term of 2021,” said Downer.

“As to the duration, I indicated to you that the trial will last at least two full terms, depending of course on what points the defence raise during the trial.”

There are 207 state witnesses on the list, said Downer, but neither Sikhakhani nor Roux “is yet in a position to indicate what formal admissions will be made, although both have indicated that they will consider making such”.

An earlier trial would also not be a good idea, for while Sikhakhane and Roux had indicated they would be requesting further particulars from the State, “neither side has directed such formal applications yet.”

Add to this Zuma’s appointment of a new attorney, Eric Mabuza, in May 2020 and you see Downer’s point.

Former lawyer Daniel Mantsha, said Downer, had, in 2019, been handed electronic copies of the docket and the forensic accountant’s report.

“Mr Mabuza was apparently unable to obtain such copies from Mr Mantsha. In the result, Mr Mabuza asked the NPA to provide him with copies directly. This was done on Monday, 18 May 2020. In the circumstances, Mr Zuma’s new defence team has only had access to the docket and report since 18 May 2020,” Downer told Jappie.

“This includes an application for the police’s entire database of all material seized or otherwise obtained by the former Scorpions, that is, not only the docket that was handed to both sides in 2019.”

In other words, they wanted it all.

This, said Downer, the State had done, but only after rehiring a forensic consultant, Johan van der Walt, who had done the original imaging and downloading, to transfer it all onto CDs.

“Given the old technology that applied when the original downloading and imaging was done, this is a long process that is still underway. The Covid lockdown interrupted the forensic consultants’ ability to travel to their offices and the task was thus interrupted.”

Because Thales had applied for ALL the information this meant that the old forensic report Van der Walt had done for KPMG had become “redundant.:

And so FTI Consulting is ploughing its way through the evidence, said Downer, coming across more payments to the former president which will form the added charges he will face.

Other difficulties were the Covid-19 lockdown and the restriction on travel, all of which had affected “the State’s ability to consult and make travel and accommodation arrangements for the witnesses from around the RSA and globally”.

Just the other day, chatting with Duduzane, Zuma remarked, “People who hate you, who have agendas against you, I have found that the law, the judiciary, the system, some people are using it.

“In essence, much as I am happy and free, but I am pursued almost like a criminal and I’m not. All the money that has been spent to find something wrong that I have done, nobody has shown me what it is that I have done.”

Well, the thrilling news for the former president, now Accused No One, is that this existential pea under his mattress will soon be resolved in high court.

There Jacob Gedleyihlekisa Zuma can finally sit long enough in the dock to go the distance, to find out exactly what he is being accused of having done, to defend his innocence, and probably, as he has threatened, to take down with him, much of the ANC house. DM