Phumelela Gaming & Leisure temporarily lays off most of its workforce 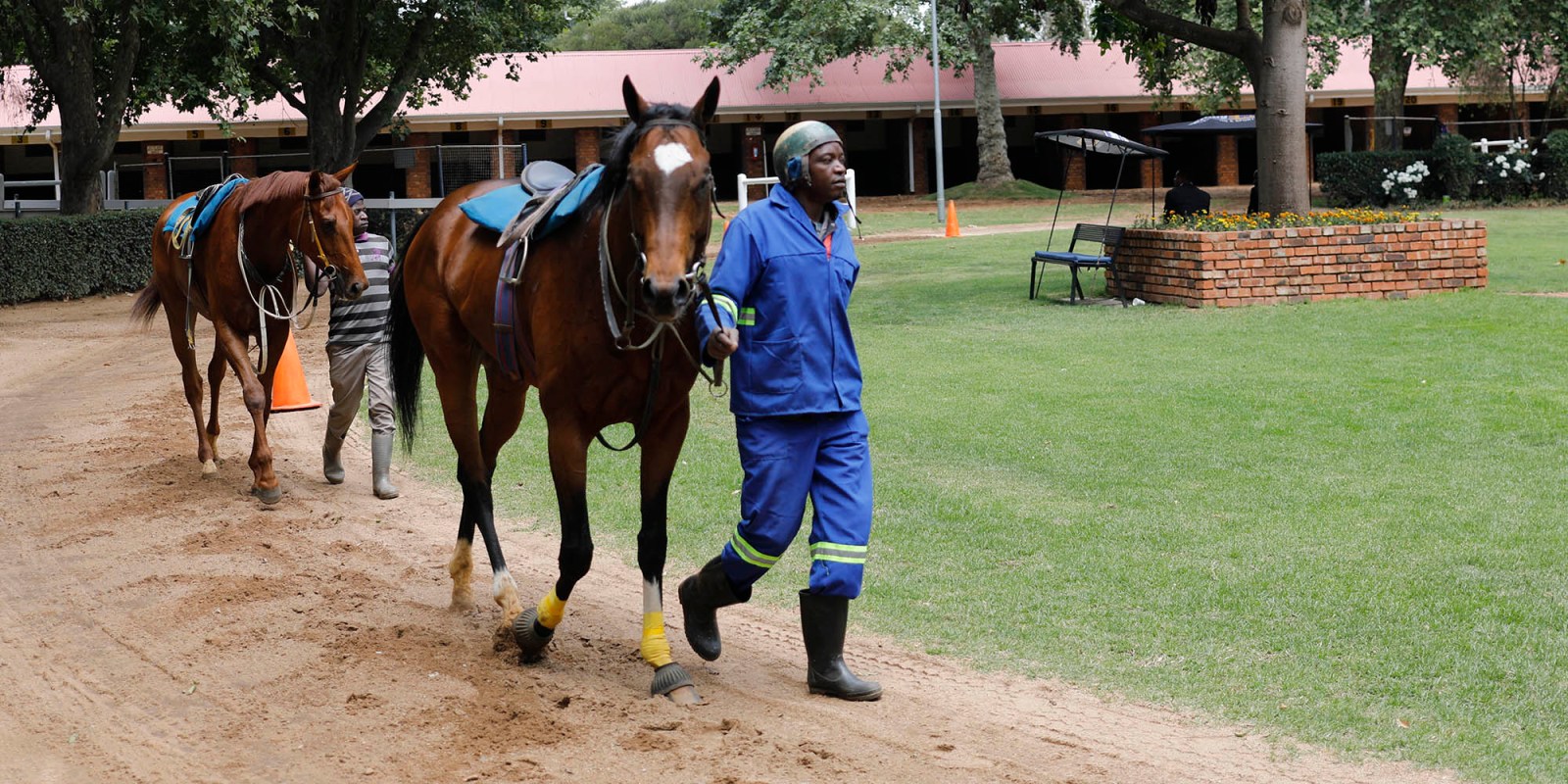 Grooms lead horses around the stables area before an event at Turfontein Race Course in Johannesburg. (Photo: EPA-EFE / Kim Ludbrook)

Phumelela has furloughed about 85% of its 1,600-strong workforce from May because the company is not generating revenue after a nationwide lockdown suspended activities in the horse racing industry. This is despite the R100-million grant from the Oppenheimer family, which will support the company for only about five months.

Phumelela Gaming & Leisure, SA’s largest horse racing and betting group, has temporarily laid off a majority of its workers and not paid them full salaries as the company’s financial crisis deepens due to the lockdown.

Phumelela, which is in the throes of voluntary business rescue, has furloughed about 85% of its 1,600-strong workforce from May because the company is not generating revenue after a nationwide lockdown suspended activities in the horse racing industry.

Furlough is a labour mechanism through which financially distressed companies temporarily lay off workers to save costs – similar to the no work, no pay principle.

Phumelela has furloughed workers of its operations that are not allowed to operate by the government during the nation-wide Level 4 lockdown including four racecourses, more than 200 betting outlets and telephone betting centres.

These people-interfacing operations have been closed since March to enforce Covid-19 social distancing measures, making workers redundant during the lockdown.

Workers who have not been furloughed are those involved in Phumelela’s care and maintenance operations such as taking care of racecourses and premises in which racehorses are kept.

UIF comes to the rescue

Furloughed Phumelela workers are only paid benefits under the Unemployment Insurance Fund’s Covid-19 Temporary Employee Relief Scheme (Ters), which was recently put in place by the government to assist financially distressed companies to pay salaries of workers who have been temporarily or permanently sent home due to the lockdown.

Phumelela applied for UIF benefits under the Covid-19 Ters scheme, which doesn’t pay out full worker salaries. Depending on their monthly salary, workers will be paid between 38% and 60% of earnings, with the lowest-paid workers paid at the top end of this scale.  There is an expectation for Phumelela to top-up any shortfall, but the company isn’t able to do so because of its financial problems.

Asked how long Phumelela is prepared to not pay full salaries to affected workers, the insider said it depends on how long the government continues with the Level 4 lockdown, which prevents the horse racing industry from operating.

“The company is not generating much revenue during the lockdown. Its financial position and ability to pay back debt is getting worse with each passing day of the lockdown. What will allow us to bring all workers back at work and on full salaries is if the lockdown is lifted.”

The insider referred further questions to the appointed Phumelela business rescue practitioner, John Evans, who now assumes both the authority of the board and the executive management. This is because, on 8 May, Phumelela submitted itself for business rescue, which is provided for by the Companies Act and is an attempt to restructure the affairs of financially distressed companies.  Evans has not yet responded to a request for comment.

On Friday 22 May, Evans held the first meeting with Phumelela creditors, which is required by the Companies Act 10 days after his appointment as the business rescue practitioner.

At the meeting, he told creditors, who have claims of about R700-million (early estimates) against Phumelela, that the company has reasonable prospects of rescue. This is because Phumelela’s suppliers have agreed to continue supplying the company while it’s being restructured.

A business rescue plan was meant to be published on 15 June but Evans has asked for an extension to 31 August because Phumelela is a “complex business and a review [of its operations] will take some time”. Creditors are yet to formally vote on whether the plan’s publication should be extended.

The business rescue proceedings cannot be protracted because the R100-million lifeline, which was thrown to Phumelela by the Oppenheimer family to stabilise the company, could be depleted within “three to six months”, according to Evans.

Of the R100-million from Mary Oppenheimer Daughters, the family office for Mary Slack, daughter of the late mining magnate Harry Oppenheimer, Evans and his team has drawn down R20-million to fund Phumelela operations. The next drawdown will be in July. BM