Mr President, let us help you keep the vultures at bay 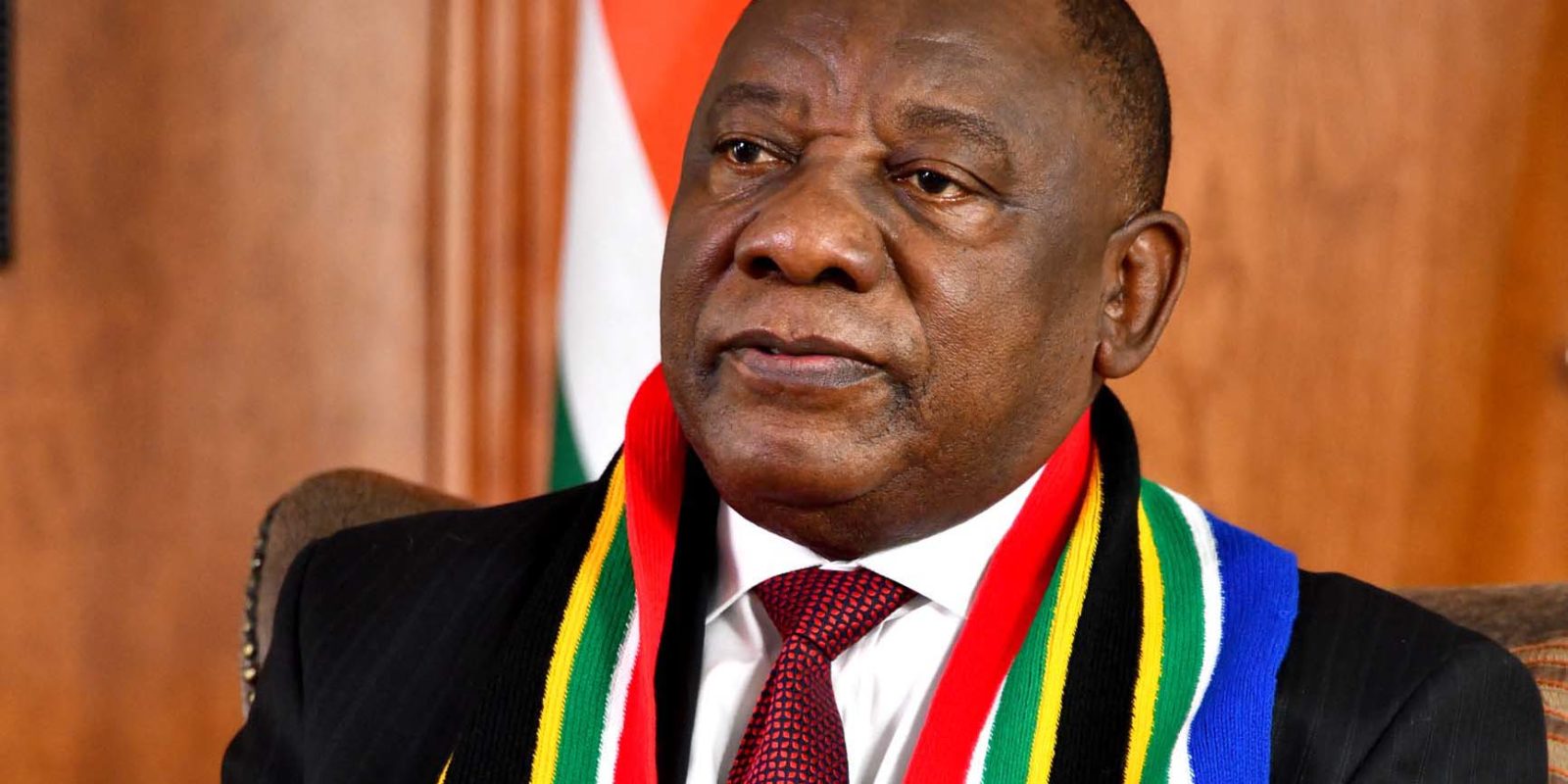 In this letter to the president, organisations raise concerns about corruption during the Covid-19 crisis.

We, the undersigned organisations, commend you for the decisive action taken over the last few weeks in dealing with the Covid-19 crisis.

We note the efforts of the state in placing the health and wellbeing of people at the forefront of decision-making.

However, we are acutely aware of the dire financial straits in which many find themselves. The snaking queues of people who turn up at food distribution sites and the daily reports of starving families is something that troubles us deeply.

It is becoming notably clearer that many find themselves simply unable to comply with lockdown measures, as they try just about anything to make a few rands and put bread on the table.

The impact of the lockdown has shown up South Africa’s stark historical inequalities. This virus is a raw reminder of inequality and how, when crisis strikes the poor, it does so with a different strain of severity.

The lockdown has made apparent the deep schism that exists between those who have access to data and those who don’t. It has allowed existing social tensions, such as xenophobia, to be reasserted, as the margin to access resources becomes smaller.

Yet we are also aware that, over the period of our democracy, if the interests of the people had been put above self and political interests, communities now in severe distress would have been better buffered against the socio-economic impact of the virus.

It is in this context that we write to you, expressing our concern about how the government’s stimulus package will be used and what measures are in place to monitor emergency spending.

The announcement of the R500-billion relief package was a welcome one, even though some have subsequently been critical of its effectiveness in stemming the economic crisis. In your recent address, you committed to ensuring that funds dedicated to combating the coronavirus response “are not wasted and are not stolen”.

While we note that a portion of this money will be going directly to recipients in need, we are extremely worried that as money is allocated at different tiers of government – to various departments and municipalities – tracking expenditure becomes more complex. We can ill-afford the diversion, looting and capture of funding meant to rescue the country from economic collapse. We cannot allow what is really the only chance left for millions of South Africans to weather the economic storm to be squandered at the hands of thieves, rent-seekers and political thugs.

Already in communities, there have been numerous reports of how simple food parcel distribution processes are being manipulated – not by hungry people who desperately need food, but by political actors who want to use humanitarian aid as a bargaining chip.

Already there are questions being raised about the illogical decision to put up a fence along the Beit Bridge border post, that is reportedly being cut through by Zimbabweans who cross into South Africa as a lifeline to purchase food. This was at a cost of a tremendous R37-million!

Already there are concerns about the prices at which, for instance, personal protective equipment is being purchased and whether this is reaching our hospitals and others on the frontline in time.

We’ve heard about the controversial purchasing of blankets at R22-million in KwaZulu-Natal and a R160-million e-learning contract that’s being questioned in Eastern Cape. Recent stories about the Department of Human Settlements, Water and Sanitation firing and rehiring officials, underscored by accusations of corruption and political battles, leaves us nervous about what the next few months could entail.

What assurances do we have in future that money intended for water tanks in communities will not be stolen by a state official, or that the price of sanitisers for reopened schools will not be highly inflated?

Local and international experience shows that emergencies increase the risk of corruption and broader supply chain failure. The lack of transparency in government’s current emergency procurement processes enhances these risks.

Problems in procurement, if not engaged with openly and sincerely, will serve to undermine trust in government. Trust is a very fragile concept, especially if one takes into account how reports of police and army brutality have eroded citizen’s own trust in the state in recent weeks. Failure to curtail corruption during this period, will simply “put the nail in the coffin”.

During this crisis, trust is a vital element in government’s ability to co-ordinate society towards a comprehensive and collective response. If we get it right now, it presents the country with an opportunity to ensure that, on a long-term basis, a culture of transparency and zero tolerance towards corruption is adopted.

It is in this context that we request that the following measures be considered as a matter of urgency:

– We believe government can draw in civil society organisations active in the fight against corruption to play a monitoring role and be granted access to information in order to do so.

– We would like to understand any current measures being proposed by government for ensuring appropriate oversight and transparency.

– Treasury must publish information about reprioritisations within the existing Budget.

– Decisions about securing funding from institutions such as the International Monetary Fund require broader consultation and transparency. The South African public needs to fully understand what the implications of such loans may mean in the long term.

– A detailed and regularly updated report of how the R500-billion stimulus package is being used, especially how monies are being allocated to municipalities, must be made publically accessible.

– A detailed and regularly updated report of how monies collected through the Solidarity Fund are being used should be made publically available.

– The Office of the Chief Procurement Officer operates the eTender Publication online portal. The purpose of this portal is to make supply chain management information easily accessible to the public, but information is not always uploaded timeously. If used correctly and efficiently, it provides a ready-made infrastructure through which the transparency of emergency procurement can be rapidly improved, allowing for civil society and others to monitor processes in real time.

– The Auditor General’s offer to send in experts to monitor how the R500-billion is spent by government departments and municipalities should be accepted.

– National Treasury regulations, instructions and the procurement policies already provide for a wide range of documentation and reporting requirements. These are often directed to relevant provincial treasuries and municipal councils. For the duration of Treasury’s Covid-19 procurement dispensation, reporting should in all cases also be directed to the Auditor General and Treasury.

– Information about who is tendering for contracts should be made public, as well as the vetting process to verify their credentials. Items being tendered for must be costed per unit, and civil society should be able to access this information so that the public can monitor if prices are being inflated before a tender is awarded.

– Information about procuring entities, the process followed and written reasons for undertaking deviation from ordinary processes should be made public, as well as details around delivery times/date of completion of contracts. Entities not complying with reporting requirements should be included on a published list of non-compliant entities.

– The Department of Public Service and Administration’s newly conceptualised central disciplinary database to monitor, track and record public servants under investigation for misconduct, corruption and fraud should be put to use. The impact of the pandemic will be with us for an extended timeframe, which means that public procurement in relation to the virus may not just be a once-off occurrence. Public servants who appear on this database should, at a minimum, be prevented from handling emergency spending.

– Parliament should exercise its powers of oversight over the executive more effectively. The institution was rightly criticised for shutting down and abandoning its oversight role during a period which called for far greater monitoring and oversight.

– Perks for government officials should be cut to minimise frivolous expenditure.

– Government should establish in conjunction with civil society an anti-corruption hotline/online service, specifically in relation to Covid-19. This platform should allow ordinary people to report, for instance, food hamper and municipal corruption.

– Political parties should sanction members found to be involved in food hamper corruption.

– The Health Sector Anti-Corruption Forum and other oversight bodies should be sufficiently resourced to effectively monitor and investigate corruption specific to the sector in relation to the Covid-19 crisis.

– Special corruption tribunals could be established to ensure that any suspected corruption related to Covid-19 emergency spend is dealt with swiftly.

– The Special Investigating Unit’s request for a national proclamation to go after corruption cases related to Covid-19 should be supported.

– Corporate sector corruption needs stringent monitoring. Companies who are not tax compliant, or who are found guilty of corruption, should not be receiving state bailouts and loans. Forensic capacity at SARS and Treasury should be specifically activated to investigate possible cases of corruption during this period.

– Government should make accessible information related to its agreements with the banking sector who, with government, stand guarantee to R200-billion of the stimulus package.

– Civil society, business and labour need to be taken into government’s confidence. Participation mechanisms need to be developed to improve how the country’s overall response is being handled and whether the stimulus plan is effective or has significant gaps, such as aiding those in the informal sector.

Honourable President, this period will no doubt test the tenacity of our country. It presents challenges unlike any we have faced before. Yet we cannot allow our response to these challenges to demobilise the public from effectively participating in our hard-won democracy.

To the contrary, it should allow us to strengthen our commitment to the Constitution. It should empower us to ensure the measures taken and the allocation of resources are, in fact, for the benefit of the people.

Yet, we are cognisant that State Capture can well manifest itself in new ways. We remain wary of the vultures waiting on the sidelines to use the suffering of people to steal, loot and manipulate policy procedures and democratic processes for their own benefit. These vultures do not care if the economy collapses, if we head towards a kleptocracy, if repression and disorder indeed become the order of the day, or if millions of children go to bed hungry. Their sole interests revolve around securing a power base from which to operate and stuff their greedy pockets.

If we fail in our duties to protect the public from these corrupt vultures during this time, we lose the last fragment of hope that we can offer to people.

We implore you, Mr President, to consider our appeals to not only defend justice during this period but to strengthen the hand of the public in ensuring that their own justice is not trampled upon. DM