Once the pandemic is over, we must fight for the freedoms we have lost in the crisis 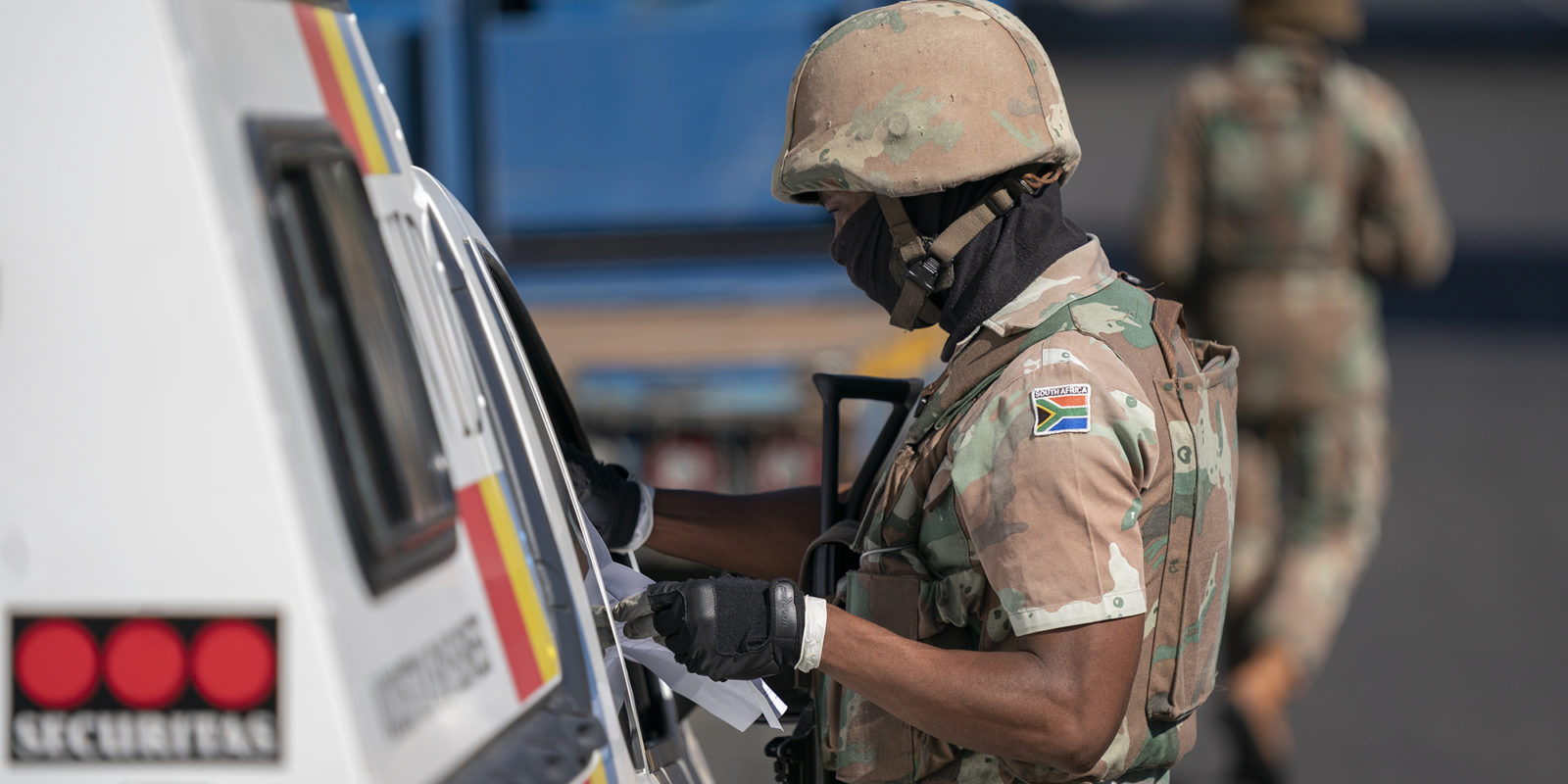 A soldier checks movement documents of a driver at a roadblock in Cape Town during the national lockdown. (Photo: EPA-EFE / Nic Bothma)

This too shall pass, and when it does we need a thoughtful, rational national debate about drafting emergency powers for future crises.

During this pandemic, and the resulting lockdown, certain ideas and concepts are being introduced and accepted by many citizens in a very short period of time. Almost all of these concepts are introduced by the government during the National State of Disaster. And yet, lockdown itself, levels of lockdown and the regulations (whether or not you can buy a T-shirt, etc) might be with us for some time to come. Worryingly, there has been no public consultation on any of it, a bad omen for a democracy.

The biggest trick the devil ever pulled was to convince people that he did not actually exist, said the fictional character Keyser Söze. By convincing people he did not exist, the devil had a lot more freedom to commit evil. In some ways, the biggest, most important move involving the regulations under which we currently live, is that the regulations spell out what people are allowed to do, rather than what they are not allowed to do. Just that switch, subtle to most, could spell evil in the future.

And the importance of this is massive. It forces groups and individuals to have to motivate why they need to be allowed to do something, whether it be to cycle at 9.02 in the morning, or to buy alcohol, or to sell T-shirts; rather than just knowing what’s not allowed and enjoying the freedom of making up their minds on what’s best for them and their closest.

Yes, dear reader, that is how the laws of the Soviet Union and its satellite states were written. Not what you cannot do, but what you are allowed to.

In a country in which we are told we prize freedom (and there is plenty of evidence that we do), this does not make sense. As Business Unity South Africa’s CEO Cas Coovadia said on Thursday morning on SAfm, the onus, particularly for business, should be the other way. The government should have to prove the case against doing something, rather than citizens or businesses having to argue the case for it. That is what has been accepted up until now.

Certainly, in normal times, we should demand that those in government explain why a freedom is being taken away through the form of a regulation, not why we deserve to have that freedom.

The way in which this has happened is simple. The first cases of the virus emerged in Wuhan. China’s officials implemented a lockdown. This was seen as a success. And so, many other countries followed. In democracies, this is always controversial. But, as these lockdowns were implemented not many people objected. There seemed, at the time, to be no other options.

There were probably two reasons why this was accepted so easily. The first is that no one knew what the virus was, no one wanted to die from it, and no one wanted anyone they knew to be in danger. The danger was also unquantifiable. It was hard to know what measures were appropriate and which measures were not.

Secondly, it seemed that this would only be for a few short weeks. It does not feel like that anymore.

In the meantime, the idea of being “under lockdown”, of soldiers on the streets, empowered with regulations and aware that they can kill someone and not be suspended, can exact a grip all on its own. It can become, some will worry, the new “normal”.

This is not exactly the same as claiming that we could become a military state, or see freedoms being taken away.

To avoid this, a whole new rethink of our framework is necessary. Even more importantly, it must be created and discussed during a period of normality, during peacetime, not during a pandemic.

It is about a mindset that becomes accepted, but has never been properly discussed or accepted by those citizens who prefer not to be treated as subjects.

The longer-term risk is not so much that as the virus danger dissipates – as it must do at some point – the government does not roll back the lockdown. The lockdown will be rolled back, because people will either go to court to remove the lockdown or simply ignore it (although the costs to society of an increase in the use of the illicit economy should not be ignored.)

The real cost of this could lie in the future. When something else happens, perhaps a new virus, or an economic meltdown, or a freak series of accidents or incidents, the structures of the lockdown and the regulations we are using now will remain. On the books, in the Government Gazette and in our minds. We will return to the National Command and other military solutions for the peacetime problems.

The reason all of this has happened is because of the speed of events. Not many expected a pandemic like this. Ministers and other officials have been under huge pressure, and probably have done what they thought was the right thing to do.

So, for example, despite much of the outrage around the regulations specifying which clothes can be bought and sold, those involved started with a noble intention. They wanted to ensure that no factories or shops could be prosecuted by police officers for selling the wrong thing. And so they created a list of what could be bought and sold. To those within the process, it all makes sense.

To those outside it, defining how closed-toe shoes can be sold, but not open-toed shoes, is just plain lunacy. We must understand and never forget that this is not normal and it should never be considered as such.

To avoid this, a whole new rethink of our framework is necessary. Even more importantly, it must be created and discussed during a period of normality, during peacetime, not during a pandemic.

When people sit down to create and hammer out a new Constitution, they often spend much time on the emergency powers section. History, including our own, tells us how easy it is for those in power anywhere to abuse a State of Emergency. Here, we have not gone that way (although it is on the books), but rather declared a State of National Disaster.

It may be that this entire act needs to be rewritten. There needs to be a big debate around how it is that ministers can issue regulations, in effect make law by fiat (although there is a huge technical argument around whether these regulations create offences). The national debate about this should be as long, as careful and as thoughtful as any debate around the emergency powers section would be.

More importantly, it needs to be conducted when emotions and passions have calmed down, not when we are feeling under threat as we are now.

This means that the lessons that are available to use now cannot be ignored. They must be properly understood, and when the time is right, properly applied. DM