Ladles of love and food for Cape Town’s homeless 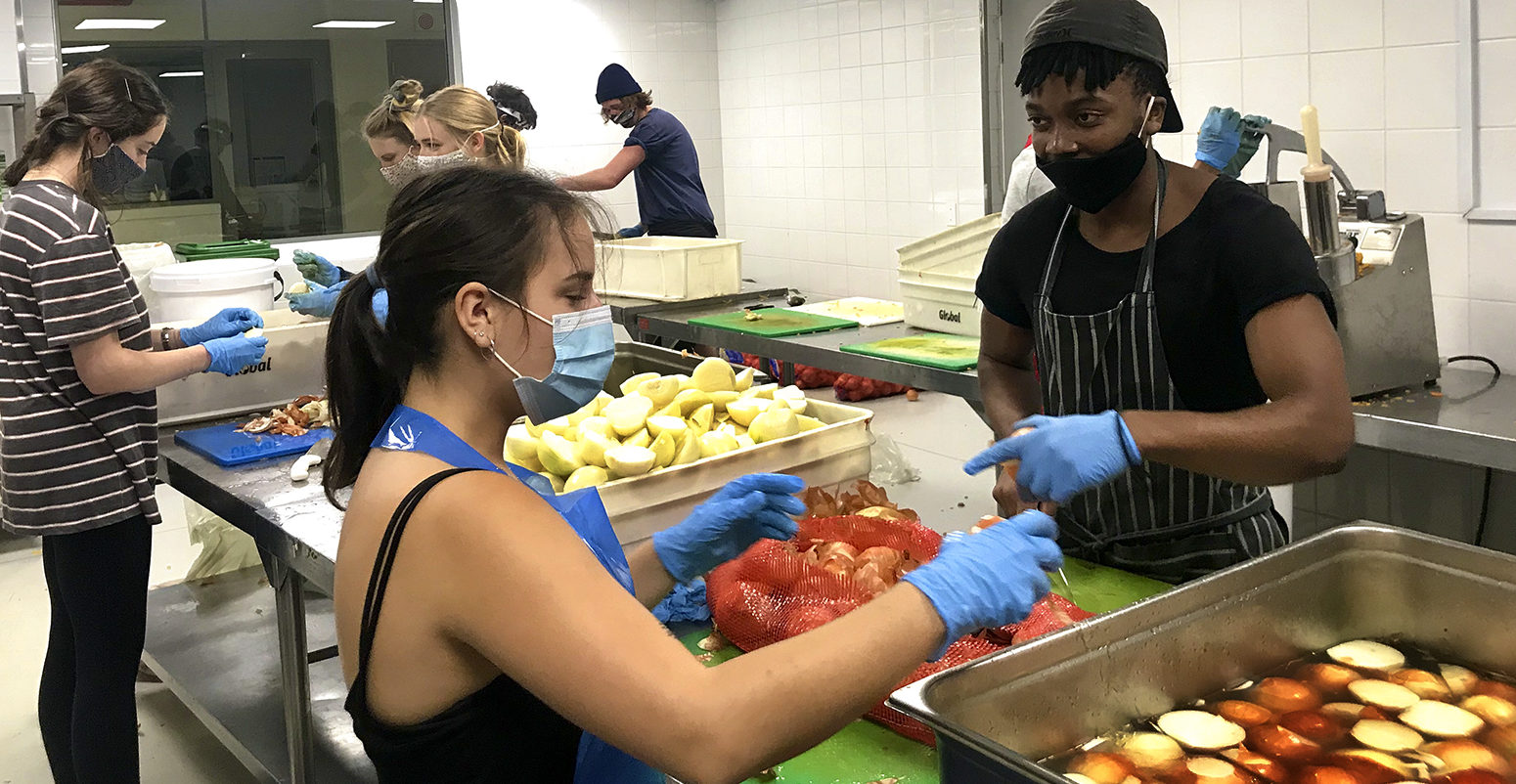 The Cape Town Convention Centre has become the heartbeat of an extraordinary endeavour, one that brings dignity, relief – and love – to those hardest hit by the crisis caused by Covid-19.

Chef Liezl Odendaal is known for whipping up unusual dishes – such as octopus drizzled in strawberry and mint – at Cape Town fine dining restaurant Janse & Co.

Now, with her restaurant closed under lockdown regulations, Odendaal can be found in an industrial kitchen underneath the Cape Town International Convention Centre, preparing food for the city’s vulnerable and homeless.

“Our own restaurant has been closed for two months,” Odendaal tells Maverick Citizen, speaking inside the convention centre’s kitchen. “There’s no point in panicking, we [her partner is fellow chef Arno Janse van Rensburg] thought we might as well do something useful.”

Odendaal is working six days a week, at the head of 17 kitchen volunteers. During Maverick Citizen’s visit, the kitchen is abuzz preparing vegetable soup, sandwiches and chocolate muffins for children at four schools in Khayelitsha’s Site B, among others. The operation feeds the children from Monday through to Friday.

Also in the kitchen throng is Guy Bennett, executive chef at hip inner-city hotel Gorgeous George. Bennett is stirring soup with a ladle longer than his arm.

“Yes, this certainly is the largest quantity of soup I’ve ever made,” smiles Bennett.

Indeed, the convention centre has become the heartbeat of an extraordinary endeavour. While many South Africans are thrashing and rebelling against stringent lockdown regulations, a growing group of volunteers are channelling their energy into bringing relief to those hardest hit.

Not-for-profit organisation Ladles of Love moved into the convention centre on April 27, after chief executive officer Taubie Motlhabane donated the premises. This includes a 1,651m² hall where food supplies are stored and sorted; and a state of the art industrial kitchen, where soup and sandwiches are made.

The operation has grown from three initial staff members to 60 volunteers, who stride around purposefully among stacks of non-perishable foods. Inside “Hall 5”, donated food items are sorted and designated to vetted NGOs around the city, based on each organisation’s needs.

“We get it ready for our NGOs,” says campaign manager Alison McCutcheon. “We profile each one.”

Speaking from behind a mask, longtime Ladles of Love supporter Samara Stern says they distribute 25,000 sandwiches with peanut butter or jam, and 1,200 boiled eggs daily. Stern heads the project’s sandwich drive, which has seen hundreds of civilians across Cape Town make and donate sarmies.

If Ladles of Love had a magic ingredient, it would be Danny Diliberto, the organisation’s founder. Six years ago, Diliberto, then owner of eatery Doppio Zero in St George’s Mall, had an epiphany after attending a course through the Art of Living foundation.

“I grew interested in the Sanskrit word ‘Seva’,” he tells Daily Maverick, during a tour of the operation. “It means giving of yourself, wanting nothing in return. Not even a thank you. It really resonated. I realised how easy it is to make a pot of soup and to feed the homeless.”

At the time, walking the streets of Cape Town, Diliberto was struck by a homeless man wrapped in a dirty duvet, shouting abuse at passersby. When Diliberto approached the man to hand him a cup of soup, the man stopped swearing. The restaurateur realised then that he had the power to restore dignity – even if it was just for a moment. And so his soup kitchen in Roeland Street near Parliament was born.

Now their output has swelled, with the convention centre’s kitchen producing nine tons of cooked food a week. His eyes sweeping across the warehouse-sized hall, Diliberto admits that it’s all a bit surreal.

“I walk around in a bit of a daze,” he says. “It is unbelievable how we have gone to this, in just three weeks. But I guess the groundwork was done over the years.”

“Ladles of Love has always been about cooking nutritious food, made with love and dignity. We see all people as the same; homeless or not, and from whatever race. Way back, two things struck me about the Sanskrit teachings. Which was that ‘as you need, so will be provided’. And, ‘as you assume more responsibility, your shoulders will grow’. This is why we have expanded like this.

“When lockdown started, it was almost like a deep knowing in me that we had to get food to as many people as possible. I had no idea where the food would come from, or the volunteers. But I just knew it would all come together.”

Diliberto leads the way into an elevator, along shiny corridors and into the downstairs kitchen. Here he introduces Odendaal, as the scent of simmering soup hangs in the air. He hands Maverick Citizen a tub of soup to taste. Then points out a room where rows of people are chatting, bent over chopping boards busy dicing onions, butternut and carrots. Inside a large adjoining cooler room, chopped vegetables are kept in knee-high containers.

Work has been around the clock, Diliberto says. He keeps logistics flowing with his phone ringing off the hook and admin demarcated to late evenings.

Outside Hall B, in a parking lot, cars are lined up.

Next to a Corsa bakkie, loaded with 500 loaves of bread, Abdurachman Muhamed says he is picking up bread to be distributed in Mitchells Plain.

“I’m just the driver, I’m not so sure of the details,” says Muhamed. “This is going to Mitchells Plain though, to Tafelsig. A house where people will make sandwiches for the hungry people. Parents there don’t have food for their children, hey. It’s hard.”

Next to him another white bakkie is parked, with Veronica Nokwaduza perched in the back. Behind her, food is stacked: bags of apples, bread and cartons of eggs. She is from a Delft NGO called Women for Action, which provides meals to about 200 people every day.

“We are specifically serving old people and kids,” says Nokwaduza. “And we also take food for the dogs, about 30 dogs. Oh, we are so grateful that God gave us this place.” She lifts a hand, gesturing at the convention centre.

Next to Nokwaduza, the bakkie’s driver, Charles Fortune, also from Delft, nods. Fortune is providing his transport services to Women for Action for free.

On Friday May 15, Ladles of Love is launching a major call to action campaign, seeking further public assistance. DM/MC