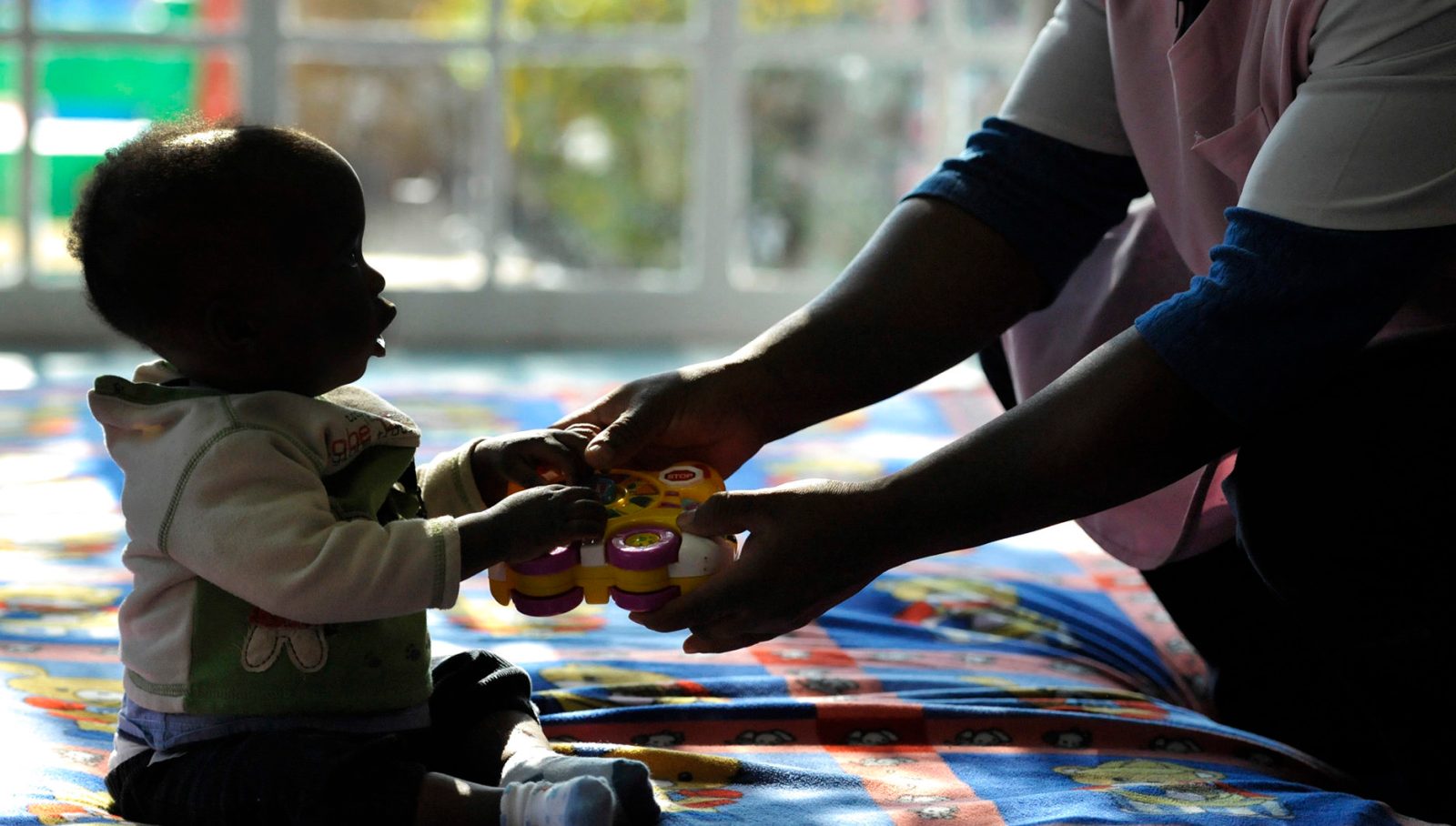 JOHANNESBURG, SOUTH AFRICA – MAY 23: One of the caregivers at Princess Alice Adoption Home plays with one of the children on May 23, 2013 in Johannesburg, South Africa.(Photo: Gallo Images / Foto24 / Lucky Maibi)

Covid-19 emergency relief child support grants are tied to a ‘primary caregiver’ model of childcare. But in South Africa, where family relations are often fluid and childcare negotiated, this imposes a rigidity which is creating tensions within families.

Caregiving is essential to sustain human life. It is emotionally and physically demanding and it can increase economic pressures on the household. In South Africa, like most places around the world, women, including grandmothers, aunts and great-grandmothers, are the main caregivers.

For most children in South Africa, childcare arrangements are made in a context of low rates of marriage, high rates of HIV, poverty, unemployment, (female) labour migration and, now, Covid-19. So, does the emergency relief grant linked to the child support grant recognise and support care?

The South African Social Security Agency (Sassa) explained that in May 2020 the child support grant (CSG) would be R740 per child, while from June to October 2020 it would go back to R440 per child but each caregiver would get an additional R500 per month, regardless of the number of children they receive a grant for.

Various groups and organisations spoke out about how this condition would provide much less relief to the burden of caregivers – predominantly poorer women and women of colour who are carrying the cost of care during the pandemic.

This cost is real. In 2018 the cost of providing a diet at the minimum required level for a child ranged from R541 per month for a child aged 3-9 years to R682 for boys aged 15 and older. These amounts show that the emergency relief increase in CSG is not even sufficient to cover the costs of feeding two children from June, especially if older children are residing in the house.

But the cost of caring also includes a social cost. One of the main principles of the CSG in South Africa is the “follow-the-child” principle, where the CSG is paid to the child’s primary caregiver. Many groups have voiced concern that the R500 top-up per caregiver and not per child diverts from this important principle. However, fewer people have spoken about the social cost of drawing on the “primary” caregiver principle, especially during a pandemic.

The model of child care put forward through the grant system does not discriminate on the grounds of gender or biological relation and this has been applauded. However, it does require that a single person, the “primary caregiver”, takes primary responsibility for meeting the daily care needs of that child. This condition is an expression of a particular model of child care and one that is at odds with how many children in South Africa are cared for.

Families in South Africa are characterised as fluid. Care is negotiated within families and the decision about who cares for a child is influenced by normative expectations but also social and economic factors such as who is available to provide care and who may need to earn money.

The label of “primary” caregiver positions an adult in a role of the ultimate and, to a degree, exclusive bearer of responsibility for a child. For many, this will mean renegotiating care that was more fluid and provided by multiple people, so as to fit the model of a primary caregiver and avail of the additional emergency relief.

Following Covid-19, the children were asked to stay more permanently in the mother’s house as it had a more reliable income which could sustain the children. The mother, who has two younger children with a second partner, has subsequently lost her income. If she is listed as the primary caregiver for the four children, she receives only one R500 supplement. If she allows the father to be listed as the primary caregiver, the two households will both receive the R500 supplement, making the two households better off. But she has to trust that the father will transfer some of the money to her to cover some of the costs of the children. There is tension regarding who should be listed as the primary caregiver and who should receive the R500 extra CSG supplement.

The label of “primary” caregiver positions an adult in a role of the ultimate and, to a degree, exclusive bearer of responsibility for a child. For many, this will mean renegotiating care that was more fluid and provided by multiple people, so as to fit the model of a primary caregiver and avail of the additional emergency relief.

In the example above, both households need the extra relief, despite the introduction of the social relief grant. The emergency relief being linked to a primary caregiver is leading to conflicts as multiple caregivers are forced to decide who among them would assume the role of “primary”.

Moreover, in many cases, this means that where care had previously been shared by many it now becomes the responsibility of one – something that many are finding overwhelming. The emergency relief associated with the CSG which is tied to a “primary caregiver” model of childcare is imposing a rigidity to care relationships which is creating tensions within families.

Recent research in a pre-Covid-19 era outlined the tensions that arise over the management and use of the CSG in the case of maternal labour migration. In many cases, the CSG was contested by three parties: the head of the household (grandmother), the labour-migrant mother and also older teenage children who understand that the grant is for their benefit. As the socioeconomic conditions of families change during the Covid-19 period (through both loss of income but also the introduction of a R500 supplement for a primary caregiver), intergenerational tensions ensue from the pressures resulting from these changes.

The debates thus far have not included a discussion of how the State’s adoption of a R500 supplement per primary caregiver may exacerbate these tensions. Despite the welcome relief for many primary caregivers, especially those who have one child — this relief comes with a significant real and social cost when there are multiple children and multiple co-caregivers. DM

Elena Moore is an associate professor in the Department of Sociology at the University of Cape Town.