The Cry of the Xcluded: We want a radical new deal that provides three million jobs 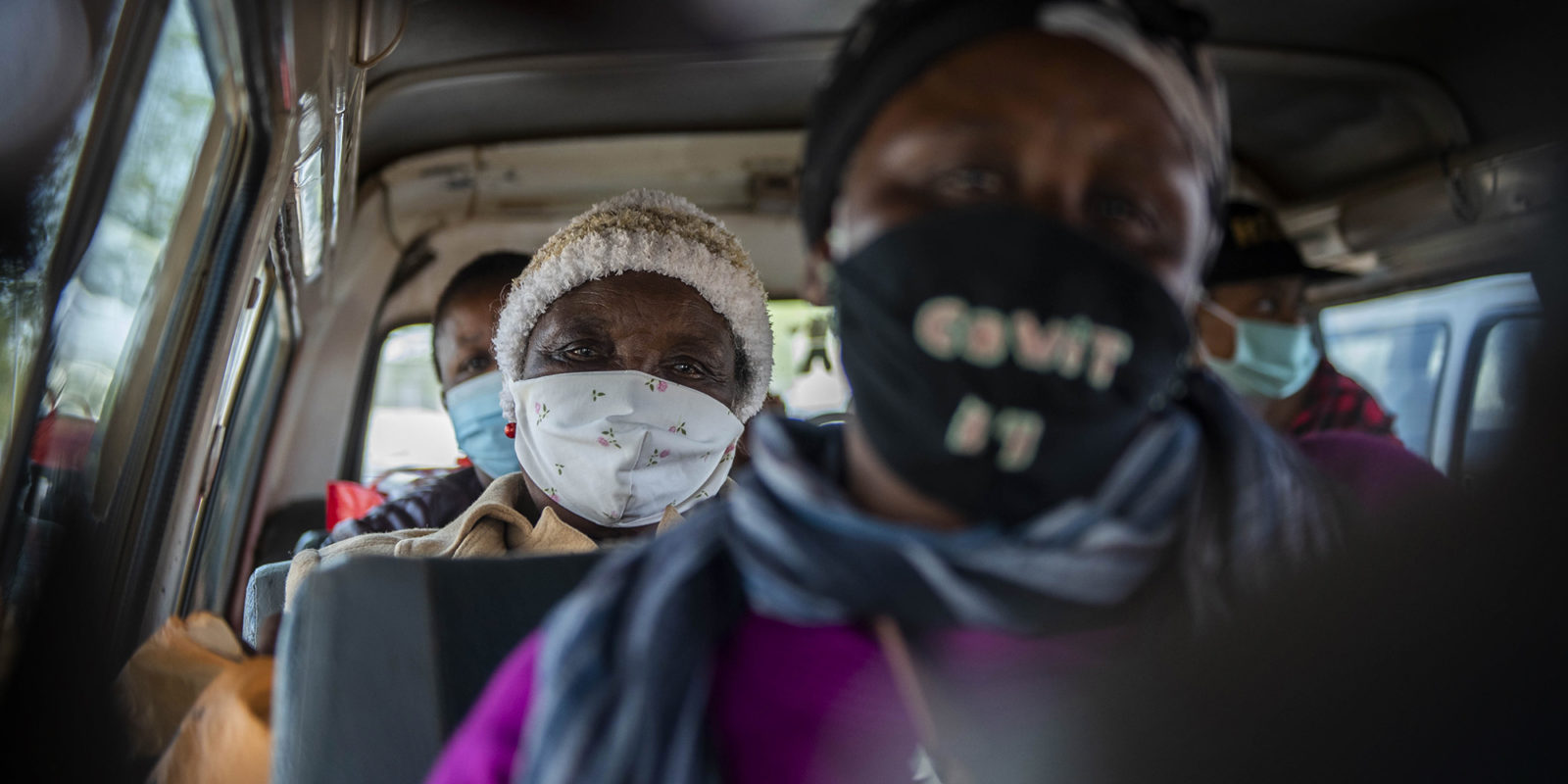 Commuters with masks in a taxi on May 12, 2020 in Tshwane, South Africa. The cry of the excluded is the cry of the majority of humanity, say the writers.(Photo: Alet Pretorius/Gallo Images/Getty Images)

We will emerge from the Covid-19 pandemic into a global economic crisis and mass unemployment. South Africa was already in an economic recession before the pandemic. We have had mass unemployment for years. We have had more than 14 million people going to bed hungry. Now, everything is set to get worse. A tragedy of huge proportions is unfolding and only by standing together can complete catastrophe be averted.

In South Africa, and every other country in the world, a great debate is underway. What can be done about the looming economic crisis?

One answer is to give vast sums of money to banks, hedge funds, mining houses, airlines, oil companies and so on – and, while not explicitly stated, cut public spending on all human needs. This is what’s called a stimulus package.

So who and what do we rescue? Banks and corporations, or people and our planet?

When must this happen? Now. Because we are suffering right now.

The pandemic has been a searchlight in the dark, picking out every injustice and inequality in South Africa. It is these inequalities that show us what needs to be done.

There are so many people living in shacks without enough space, without clean water, without proper sanitation. They are completely defenceless in the face of a crisis.

We need to build decent, spacious housing near parks and places of work. We need clean water, sanitation and sewage lines. And we want to break the neo-apartheid segregation of the rich and poor. New homes must be built in the centres of our cities and towns.

There are tremendous opportunities for employing young people in ‘building brigades’, where they can be trained to be the bricklayers, plumbers and electricians our mass housing programme will need.

Obviously we need a decent health service for all, so that the poor and people living in rural areas get the same standard of treatment the rich get now.

Our community health workers have been heroic, and this is a foretaste of a better future. But they work on a casual and precarious basis. They must have contracts, permanent jobs and a living wage.

The lockdown has exposed the scale and number of people living hand to mouth, day to day, in the informal sector. The lockdown saw people go from being waste-pickers scratching in bins one day, to having no income the next.

Never again. People need work. So do the over 11 million people who were jobless before the pandemic. This includes those who have given up looking for work and those who Stats SA counts as homemakers – mostly women.

Apart from the crisis of unemployment, there is the sheer barbarity of some, the collapse of our social fabric, the violence against women and children, the xenophobic attacks. Jobs will not solve all our problems, but we cannot begin to solve anything while so many are without work.

The lockdown has exposed how millions of South Africans go to bed hungry every night. This will continue as long as food production remains in the hands of fewer than 40,000 commercial farmers and four major supermarket chains.

We need local food production and local food markets supplied by small-scale farmers who can raise animals and crops in ways that use traditional knowledge and preserve the soil. It must include the thousands of farmworkers still living on commercial farms.

This is why we need land redistribution. Many farmworkers face eviction – they need security of tenure. Two million small-scale farmers need land and support far more than the new layer of black commercial farmers who do nothing to break the hold of industrial agriculture.

The unemployed movements are demanding a basic income grant. Government says all it can afford is a R350 per month disaster-related grant lasting for six months – enough for an extra loaf of bread a day and nothing more. We need a grant ten times that amount – as close as possible to the national minimum wage.

We also need jobs relating to climate change. Jobs that can help stop global warming. Jobs in the renewable energy and transport sectors. Jobs that involve rehabilitating land damaged by mining. We have begun to see what climate change means. The long droughts, the storms, the floods across southern Africa. And much worse is to come.

We have long supported the campaign for One Million Climate Jobs. That is why we call for a Just Transition to a Green New Deal. These jobs must include building enough solar and wind farms to meet our energy needs. We must have jobs manufacturing wind turbines and solar arrays in South Africa. Otherwise we will only have jobs monitoring and cleaning wind farms and solar panels. This will need radical changes to our trade policies.

Workers in fossil fuel industries fear that green energy will cost them their jobs. It won’t – not if the transition is publicly driven, phased in and managed in all aspects of the shift. We must be absolutely clear what a ‘just transition’ means. Anyone who loses a job in the transition will have a decent, permanent government job in the Green New Deal, or a lifetime grant based on their current pay, for those unable to take up suitable alternate jobs.

Perhaps a million jobs will be provided in renewable energy, transport and other climate-related work. Perhaps two million will be created to meet other needs. We can debate this. We hope to bring together working groups from every sector of society. These groups will draw up plans for what jobs the three million workers could do. And for what kind of a society we want.

We have done this before in South Africa, assembling alternative plans and economic visions of a nation of equals. This is what we fought the freedom struggle for. We come from a long tradition.

But this is not an alternative economic vision we’d like to see realised some day. We are proposing a fight for three million new public sector jobs now. We want government to provide those jobs, or be replaced by a government that can and will do it. The measure of our success will not be words, or promises, or come from members of this or that party. The measure will come when three million people are doing those jobs.

We are now trapped in a minerals, energy and finance-driven economy focused on export. It’s this economy that built apartheid. It made the great mining houses rich and created many millionaires. This economy is now declining at increasing speed. The mining houses grow ever more desperate for foreign investment to survive. The government grows ever more focused on finding foreign investment and currency. That money can, and does, pour out again, leaving us in a financial panic with mounting debt and fewer jobs. It’s a bankrupted strategy.

We remain, as we have been for more than a century, the playthings and a source of value for the financial empires of Europe and North America, and now China too.

We cannot stop this decline without equality in South Africa. We can only move away from dependence on foreign exchange if our working people have enough income to buy what we make. We need a steel industry again, to produce the steel that will be needed for housing and other vital infrastructure – for wind turbines and a new electricity grid. We need the long-promised but never delivered integrated public transport system providing cheap, convenient, regular and safe mobility for everyone. We need a renewables industry to kickstart many other industries. We need plants making electric vehicles of every kind, that can run on electricity from renewable sources.

If there is anything that the Covid-19 lockdown has taught us, it is that we can change the way we work. We can work remotely. We don’t need our cars that much. We don’t really need the fossil fuels that our cars burn. We don’t need planes and trains all that much. What we do need is greater information and communication technology infrastructure. We need state-owned ICT that can provide free internet and cost-effective remote communication to our people. We need free education programmes on the internet. We need webinars that can teach us and our children without putting a burden on the planet.

In short, we need a new green industrial sector.

We cannot solve our suffering in South Africa on our own. Were we to confront the power of global capital alone, we would be helpless. But the discussions we will have in South Africa will now be had in every country in the world.

And we need to think of not rescuing airlines so that foreign tourists can visit. We need to ask instead: When can people from Khayelitsha swim in the ocean, walk in the mountains, and stand in awe of our wildlife?

How can we pay for this? South Africa is not a poor country. It is a rich country full of poor people. We have resources on a global scale. We also have obscenely rich people who care nothing for the majority of their fellow citizens.

Many economists say that we cannot afford three million new jobs. We can. All we need to do is tax the incomes and wealth of the rich. Yes, the details of economic and tax policies are more complicated than that. But they are also simple. We will need dramatic changes to economic policies to give us the power to implement our financing plans.

Yet, it is understandable that our economists and ministers worry about foreign exchange and the rand. They are afraid of the power of the world economy, and that power is real, implacable and cruel. But there is another power in the world.

We cannot solve our suffering in South Africa on our own. Were we to confront the power of global capital alone, we would be helpless. But the discussions we will have in South Africa will now be had in every country in the world.

In every country there are people saying, “We are not going back to normal, because normal was the problem.” We need to meet human needs. We need jobs and to get the economy moving again. We need to save our planet. This means we will have to fight the corporate polluters, the financiers, the big banks. It probably means a fight with our government, which refuses to break with these elites who brought us to this point.

Fights for Green New Deals around the world can make us stronger in each country. In this, lies one of our greatest strengths – that the cry of the excluded is the cry of the majority of humanity. DM

This piece is published in the name of the Cry of the Xcluded. The following have pinned their names to it: