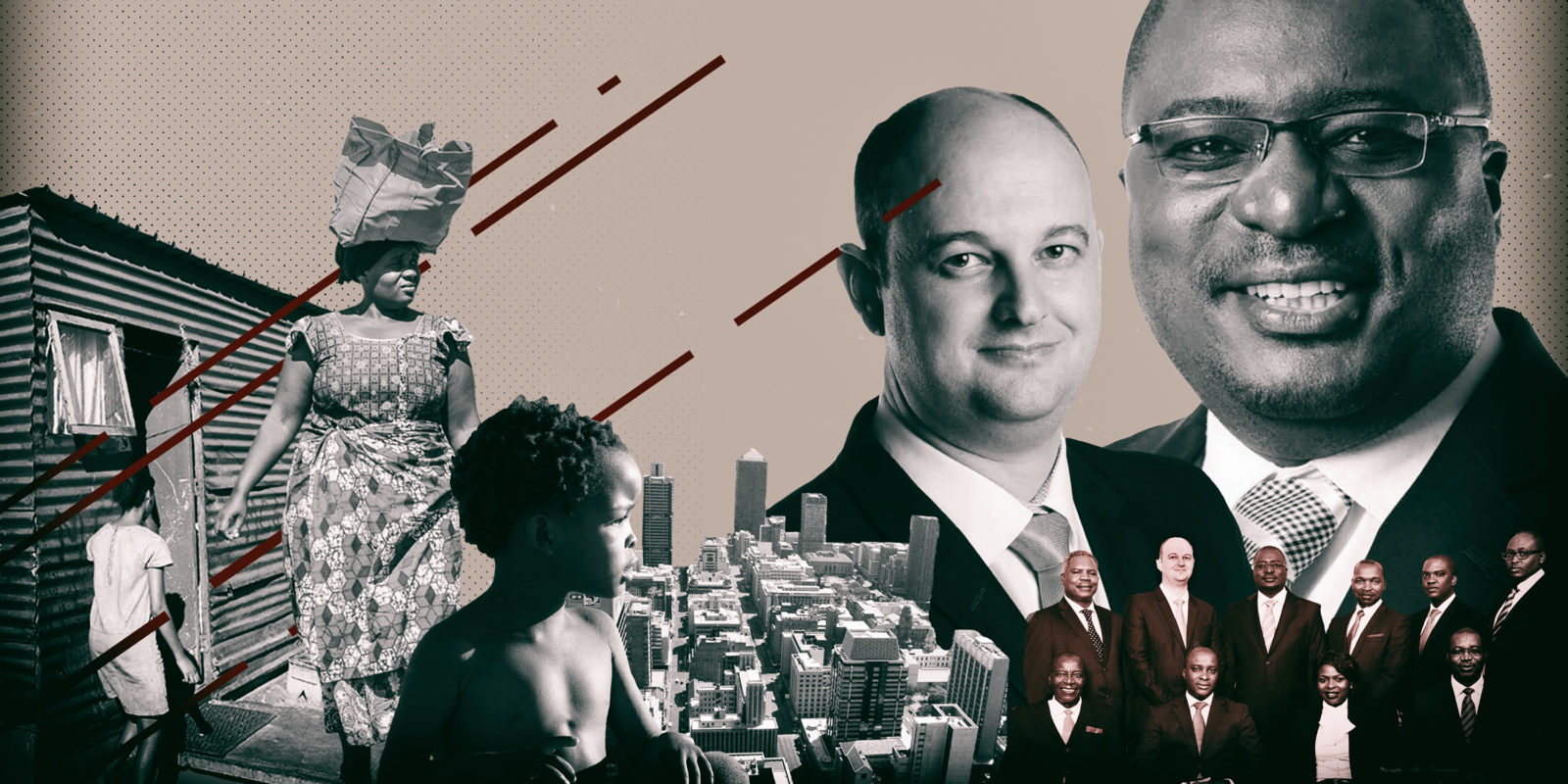 An important figure in SA law enforcement’s VBS Mutual Bank investigations is former VBS CFO Philip Truter, who played a central part in the robbery. Truter’s testimony seems valuable in tying KPMG auditor Sipho Malaba as well as VBS alleged robbers-in-chief Tshifhiwa Matodzi and Phophi Mukhodobwane to the scene of the crime. In this Bank Breaker series, Scorpio will analyse new information about the R5.8-million in stolen VBS money that Truter received for participating in the cover-up of the bank robbery, what his never-before-seen WhatsApp messages tell us about the anatomy of the VBS robbery and how his testimony may aid the case against his fellow robbers.

Philip Truter was an important cog in the robbery of VBS Mutual Bank. As the bank’s Chief Financial Officer (CFO), his primary duties included the financial and risk management of the bank. It was his fiduciary duty to report all irregularities he had suspicion or evidence of to the authorities.

The “buck ultimately stopped” with Truter, a KPMG auditor testified before Advocate Terry Motau and law firm Werksmans during a 2018 investigation, probing what then seemed to be a VBS “liquidity crisis”, at the behest of the SA Reserve Bank (SARB). From Motau’s investigation, it transpired that under Truter’s watch, the bank was actually robbed into insolvency. About R2.7-billion in poor people’s stokvels and municipalities’ money was funnelled to bankers, auditors, lawyers, politicians and businesspeople, liquidator Anoosh Rooplal later found.

Because Truter, the sentinel, did not sound the alarm, thousands of poor depositors, including municipalities and the people they serve, are now impoverished.

Between 2015 and 2018, former VBS chairman and alleged architect of the robbery, Tshifiwa Matodzi syphoned at least R325.8-million in VBS money to himself and parties related to him. His egregious acquisitions with stolen VBS money included a helicopter, a Ferrari and several properties.

Former KPMG audit partner for VBS Sipho Malaba received at least R34-million for being a team player. Malaba worked closely with Truter, and assisted the cover-up by lying to the SARB and deliberately signed off on fraudulent annual financial statements.

Evidence and testimony before Motau suggest all this was at least in part facilitated by Truter, or that he had knowledge of the money flows.

Truter testified before Motau in May 2018, saying that he did not know the full “extent” of the robbery. This seems questionable, especially seeing that Truter was instructed by Matodzi at one stage to wipe the overdrawn balances on about 34 accounts held at VBS in the name of Matodzi and various associates and companies in which he held an interest. Matodzi instructed Truter and Mukhodobwane to credit these accounts with a fictitious amount totalling close to R250,000. (More about this in the third instalment of the Bank Breaker series.)

Mukhodobwane also declined to answer questions. Matodzi’s latest telephone number has been switched off and Malaba’s number is not in operation since Motau’s VBS report was published.

Officially, Mukhodobwane was Truter’s second-in-command and direct report. In reality, WhatsApp messages between Matodzi, Mukhodobwane and Truter suggest that Mukhodobwane had pulled Truter’s strings and that he acted as Matodzi’s right-hand man. This is clear in the way Matodzi and Mukhodobwane discussed illegal payments to associates, in the way both men scrambled to ensnare higher net worth depositors in order to hide the ever-growing hole in the bank’s finances and in the way Mukhodobwane suggested to Matodzi that Truter would be satisfied with only R5-million in bribe money. Truter allowed it, at least in part, because he seems to have been perpetually short of cash.

Truter was what one may call a VBS lifer. He was employed at the bank in February 2005. He qualified as a young accountant who finalised his articles at PWC in 2003.

In 2014, Truter was elevated to the position of CFO at the bank, around the same time that Matodzi started scheming about turning VBS around from a modest bank to a profitable black-owned bank to “outshine” all competitors. This despite Truter’s highest qualification being a Bcom Honours in accounting as opposed to the industry standard qualification of chartered accountant or an MBA with a focus on finance.

Four years after his appointment as CFO, Truter in his testimony before Motau often claimed he didn’t feel “comfortable” with what Matodzi or Mukhodobwane discussed with him or wanted him to do.

For most shenanigans not permitted by the Emid system, Truter was consulted on how best to create illegal transactions or on how to circumvent the system.

WhatsApp messages between Matodzi and Mukhodobwane suggest they needed Truter as he knew how the banking system worked.

During 2017, at the height of the robbery, the bank managers resorted to keeping track of some of the bank’s money on spreadsheets rather than the Emid system, as it allowed them a greater “freedom” with the millions of rands running through the bank.

The comparatively modest amount of R5.8-million in stolen VBS money which made its way to Truter is not indicative of the appalling nature of his actions.

On his own version before Motau, Truter committed fraud when he misrepresented VBS’ 2017 annual financial statements, submitted fraudulent deposit insurance returns (DI returns) to SARB and may be guilty of contravening the provisions of South Africa’s Prevention and Combating of Corrupt Activities Act (Precca), when he received large bribes in exchange for his silence and essential participation in the manipulation of the banking system.

In the first instalment of Daily Maverick’s Bank Breaker series, we look at what Truter has done with his share of the VBS bribe.

A collection payment of R15 for the NG Kerk in Louis Trichardt, Limpopo, was one of the first payments recorded on Truter’s VBS bank card stuffed with stolen money. The payment is labelled “NG Kerk Offergawe”, dated 5 May 2015.

Between this date and 1 June 2018, Truter received at least R5.8-million in cash, bonds and vehicle finance from VBS bank.

Legally, the most problematic for Truter will most likely be the R2-million in bribe money Matodzi and Mukhodobwane ordered to be paid into a company solely owned by Truter.

These three payments were paid from Vele Investments, a company used by Matodzi to illegally move money around, including to pay bribes. There are no invoices for these payments, Truter delivered no service to justify these payments and it was not linked to his performance at VBS. The origin of these was simply because Mukhodobwane wanted Truter inside the robbers’ circle of trust rather than outside of it with a view looking in.

Truter continued, saying “I understood it to be payment from Vele because I cooperated in this whole scheme, to make it work and execute a lot of… because in my capacity as CFO and Director of the bank there was a lot of risk that I placed myself under in doing certain transactions, and my understanding was that it was some kind of compensation for risks that I took… essentially gratification for executing certain transactions…” (sic)

Defining the payment, evidence leader in the Motau investigation Advocate Ross Hutton SC stated: “Yes. It was a bribe. It was the payment of a bribe or a reward for bending and breaking the rules for Vele; for facilitating Vele’s acts of dishonesty, fraud and theft. Correct?” (sic)

The bribes came about after Mukhodobwane and Matodzi on 5 October 2017 in a WhatsApp discussion planned to steal another round of VBS money by simply moving large sums towards bank accounts they themselves controlled.

Mukhodobwane then warned Matodzi that Truter “is seeing this movements”. (sic)

“Put 20 in your acc and explain you are holding [R10-million] for him”, Matodzi replied.

Testifying about the incident, Truter said the payments meant he “would now be entitled to R5-million as some kind of allocation. I was of the understanding that [Mukhodobwane] himself was also allocated a R5-million allocation.”

WhatsApp discussions show that Mukhodobwane told Matodzi off for allowing an illicit R10-million money flow to Truter, saying that “I think even 5m could work for him”.

Truter eventually received only R2-million in cash, paid in two tranches on 20 November and 15 December 2017 to a company he was the sole director of, named Shangri-La Investments Pty Ltd.

Truter thanked Mukhodobwane “for the assistance”, in November after the first R1-million in bribe cash was paid into the account of his private company.

In December, Truter requested the second bribe from Mukhodobwane because he “just need(ed) something for the holiday”.

This “something” was clearly cash, as the next WhatsApp to Mukhodobwane again contained Shangri-La Investments’ FNB account details.

Truter testified that he used the bribe “essentially just to come out of the red”. He settled some debt after which he bought about R600,000 in Bitcoins (to be sold later against a huge loss), and pushed the rest into investment accounts and shares through PSG.

The access to millions did provide Truter with some peace of mind about his financial position, it seems. The very next day after being promised a bribe by Matodzi on 6 October 2017, Truter signed a vehicle finance agreement with VBS for the acquisition of an Audi A5 Coupe 2.0 for R613,593.

The curator sold Truter’s vehicles and property in attempts to recoup some of the lost money, a paper trail suggested, which was confirmed by a source. Truter declined to comment on the sale of his assets seemingly funded by VBS loot.

The Hawks, the National Prosecuting Authority and the South African Revenue Service are looking closely at the eight bankers, auditors and lawyers identified as the guiding hands behind the robbery, six sources with direct knowledge of the matter said. These include Truter, Matodzi and Mukhodobwane. Arrests, at this stage, are only spoken of.

This month, National Treasury warned that the combined effects of South Africa’s existing fragile economy and the effects of the Covid-19 lockdown may result in the country losing a projected 7 million jobs, which will translate into a record unemployment rate of up to 50%. The pandemic and its effects are a second severe blow to the people who lost their pension and savings, which were deposited at VBS. DM