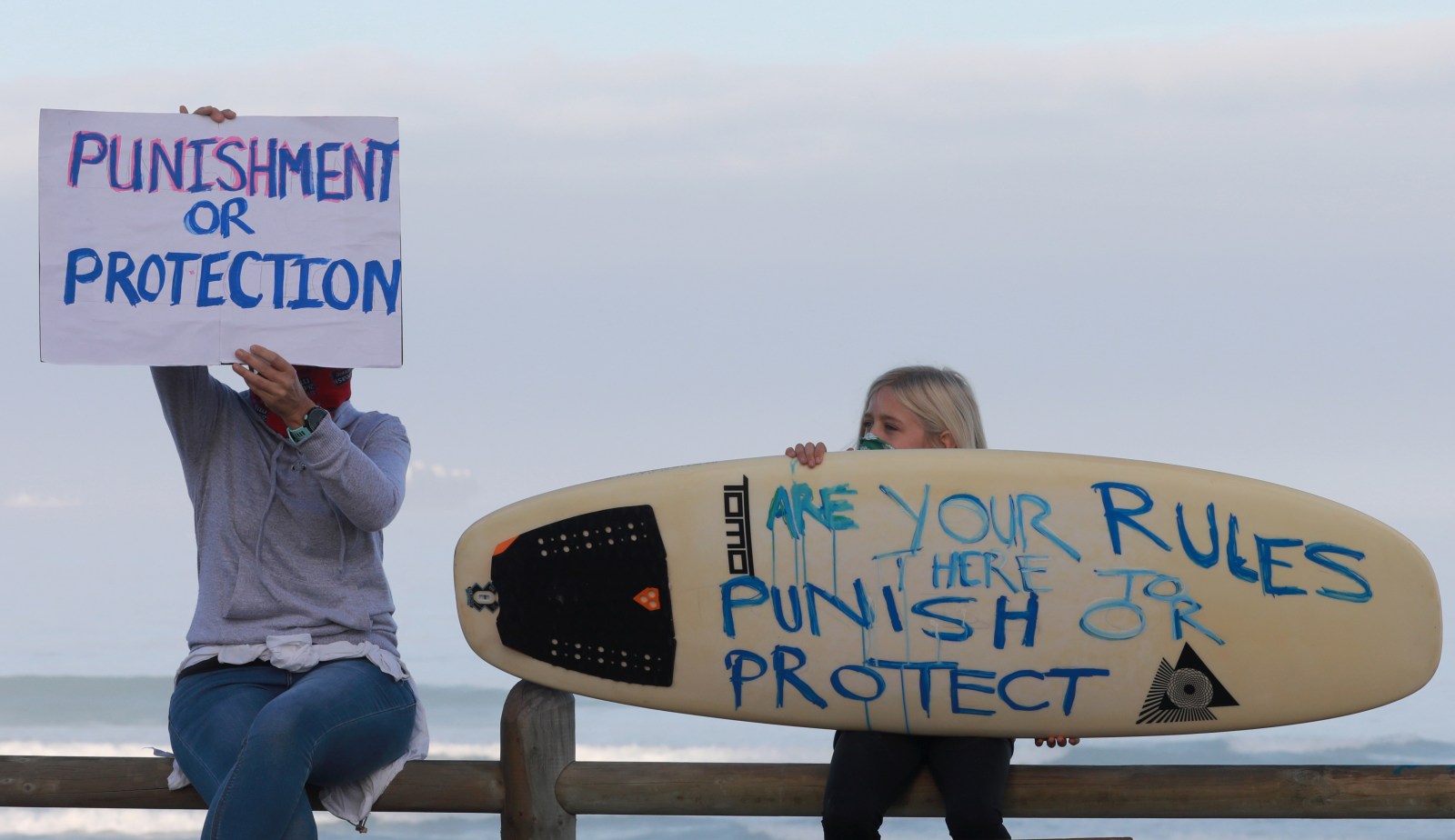 CAPE TOWN, SOUTH AFRICA - MAY 05: Surfers seen at a protest to get back in the ocean at Blouberg beach in Cape Town, South Africa, Tuesday, May 5, 2020. South Africa started a phased easing of its strict lockdown measures in a continued attempt to contain the increase of coronavirus cases. Beaches and national parks remain closed. (Photo by Gallo Images/Nardus Engelbrecht)

This is a summary of themes and narratives trending in South African social media on 5 May 2020.

Stories about citizens pushing back against lockdown measures were scattered throughout the top 10 posts by reach: stories about cigarette producers threatening legal action, an aviation petition and a surfer protest were widely shared.

Conversation about tobacco by organisations and individuals continued throughout the day, achieving a high reach.

By 09:00 on Tuesday, people were retweeting a Cape Talk post about a man who was arrested after his toddler ran onto the beach. The post showed his masked fiancee breastfeeding their child, outraged that the police vehicle her fiancé was taken away in did not have a safety belt and the police officer was not wearing a mask.

Conversation about Muizenberg grew after a News24 report about surfers who were arrested at the #Backinthewater protest in Muizenberg.

The videos shared on social media depicted white protesters only. Some tweets referred to the surfers as “entitled Europeans”. One surfer was caught on camera telling the police off after he was caught breaking the law – he made a daring attempt to flee the scene and evade arrest on his bicycle. He was caught.

@Angela74741994 and @RuanLotter debated which solo sports and activities should be allowed and why.

A group of citizens involved in aviation are calling on government to reopen general aviation in South Africa.

Some posted a link to a petition created by Safomar Aviation Operations two days ago, addressing the South African government and civil aviation authorities.

The petition seeks 35,000 signatures, and had just over 28,000 on Tuesday. The petitioners say that one person in a small aircraft poses a low risk of spreading Covid-19, and a small number of operational staff was required to coordinate the flights.

The petition uses an image of a hangar filled with small private aircraft, owned mainly by a privileged wealthy minority in South Africa.

Citizens are beginning to raise their voices and air their thoughts about lockdown measures.

@KwaMhlanga123 got the conversation going with a post that was retweeted more than 350 times: she compared the situation in Tanzania with the South African experience.

Another trending post was created by @JoedeBobski: after following orders for the 21-day lockdown and the two week extension, South Africans are now completely “gatvol” because of the confusing and inconsistent messages they are receiving. DM

The Centre for Analytics and Behavioural Change (CABC) is a non-profit organisation incubated at the Graduate School of Business at the University of Cape Town. The CABC stimulates positive social change through engagement, dialogue and advocacy.www.cabc.org.za