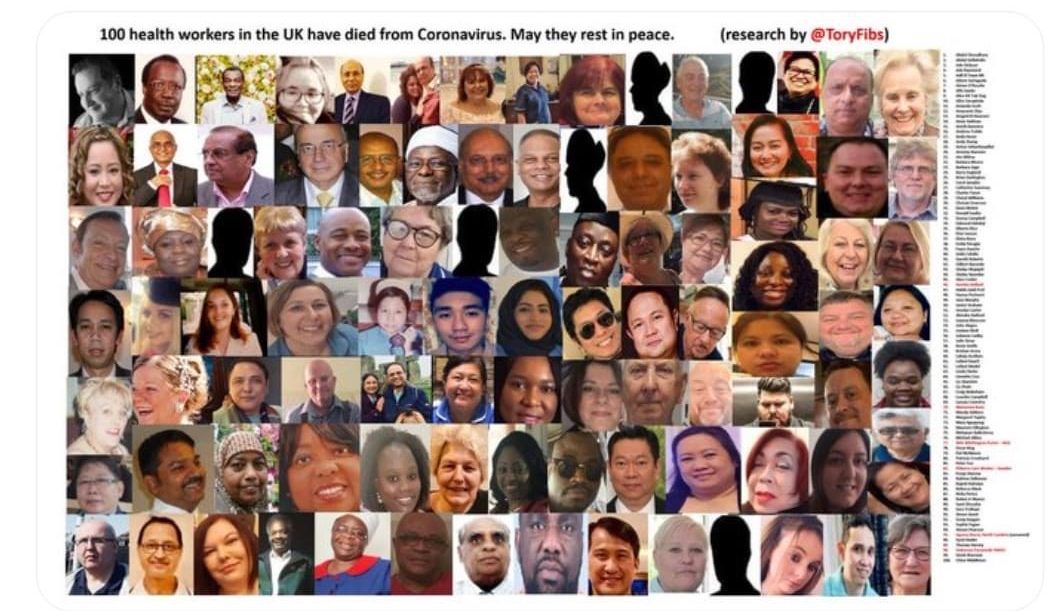 A social media post remembering the UK health workers from across the world who have died.

Covid-19 is the great leveller. Or is it? As a friend of mine said recently, “With Covid-19, we’re all in the same storm – but not the same boat.” Veteran health and gender rights activist, Robin Gorna, continues her reportage from the UK – now with 30,000 reported deaths – and asks why Covid-19 is having such a devastating effect on ethnic minorities, especially those who work in the National Health Service.

The latest UK statistics on Covid-19 show the unrelenting climb in deaths – and with every weekly update we hear a more complex story. We now have over 10% of the global caseload: 29,427 recorded by 5 May (possibly well over 30,000 by the time you read this). Remember, this is mostly hospital deaths – we still don’t tell the truth about people dying of Covid-19 in residential and other homes. If  we counted them, the death toll would shoot even higher.

A South African friend reassured me, “That’s not so bad”, until she realised that this is tens of thousands of people dead since the start of the year – not cases detected. We have five to eight times as many deaths as South Africa has confirmed cases (and 200 times as many UK deaths as people recorded to have died from Covid-19 in South Africa).

Our confirmed cases are rising, and that’s a good thing. It means that at last people are getting tested. The system is still a mess, with government officials playing slippery number games. Only a select group is allowed to order a test online, and if you’re one of them, well, good luck – in the first three minutes the full stock of test kits ran out and the website crashed. The alternative is to drive to the army-staffed drive-through centres in distant towns. No contact tracers are in place yet to help manage the results, so we only have half of the ‘test and trace’ strategy in place.

On 5 May, we recorded 194,990 confirmed cases – and that must be an under-estimate. Even basic maths skills tell you we can’t have 5% of the global caseload and over 10% of global deaths.

Doctors know that Covid-19 raced silently around London in late February and early March. That was the time my son told me I was overreacting as I sent him into isolation with ready meals, a thermometer and fresh linen to change the bed sheets dripping from his wild night sweats. It will be a long time before those thousands of Londoners get antibody testing to reveal that they had Covid-19 rather than some other nasty flu bug.

Two short months after the virus ripped through our capital city – sending the middle classes and royals rushing into exile in their holiday homes and castles – we’re starting to breathe a little, step back and look at what is really going on.

The latest statistics are horrifying, not just because of the overall numbers, but for the inequity lurking below the surface.

Our first glimpse came a week ago when newspapers printed montages of the 100+ healthcare workers known to have died from Covid-19. It didn’t take exceptional skills to notice that nearly every doctor, nurse and care worker who succumbed was black or brown (known in the UK by the acronym BAME: Black, Asian and Minority Ethnic).

The explanations started to fly around: No, it could not be a genetic issue, but maybe it’s all about underlying health conditions. Rates of diabetes, cancer, heart disease and obesity (known to be confounding factors) are high in Britain’s BAME communities.

No one really thinks the risk factors are medical– we can see that they are behavioural and social.

The pay is so wretched in our beloved National Health System (NHS) that staffing structures have shifted dramatically – workers are actively recruited from other countries; 20% of all NHS workers are from a BAME background, as are half of all London doctors.

If you’re a BAME worker, it’s quite likely you are at the front end of the onslaught – providing day to day care to hundreds of people – and on the receiving end of massive doses of the virus while struggling to get access to the precious short supplies of PPE.

The British Medical Association (BMA), an august, establishment organisation, rang the alarm bell a couple of weeks ago, surveying 6,000 doctors and finding that, “Almost double the proportion of BAME doctors (64%) have felt pressured to work in settings with inadequate PPE where aerosol-generating procedures are carried out exposing them to risk of infection. This compares with 33% of doctors who identified as white.”

PPE does not fit easily over the beards that many Sikh and Muslim doctors have for religious reasons – but that doesn’t explain the full story. As an aside, the culturally simplistic vision of a normal face also explains why women are over-represented among healthcare deaths: PPE is designed for a standard male face and body.

Among those heartbreaking photographs of victims are many of the people whose jobs are the least well paid – the ones whose daily labour requires repeated contact with patients, going the extra mile, doing the toughest jobs.

Things have got so bad now that NHS managers have written to hospitals telling them to conduct risk assessments and consider pulling BAME workers from frontline duties if they don’t have the right equipment – but that all comes too late.

The day we went into lockdown, on 23 March, Burmese specialist in neuro-rehabilitation Dr Peter Tun wrote to the Royal Berkshire hospital pleading for access to PPE for all doctors, not just for people working in the ICU. Dr Tun died in his own hospital on 13 April, one week after being diagnosed.

He wasn’t the first. Five days before British lockdown, Dr Abdul Mabud Chowdhury pleaded with the government for more action. Addressing the Prime Minister on FaceBook, he wrote:

It was just a few days after Johnson had been cheerfully boasting that he was still happily shaking hands with hospital patients. The 53-year old urologist reminded the PM that healthcare workers have a “human right like others to live in this world disease-free with our family and children”. Three weeks after writing this, on 9 April, Chowdruy was dead from Covid-19 and Johnson was in intensive care being pumped full of oxygen. We presume the PM’s health carers had access to all the PPE they needed (of the four who were named, all were white and at least half were not British).

Prime ministers, princes, famous Hollywood actors and rock stars are all succumbing to the virus. Does that mean Covid-19 is an equal opportunities virus? The great equaliser?

In the early 1990s, in my book Vamps, Virgins and Victims: How can women fight AIDS,  I railed against “the UK[’s] central public health message… which slips into the facile phrase ‘HIV Is an Equal Opportunities Virus’”. I’ve worked in global health for nearly four decades and I haven’t yet tripped across an equal opportunities virus. Viruses and diseases follow the fault lines in our societies. Covid-19 is no different. HIV has consistently tracked the lines of hatred, discrimination, criminalisation, poverty and race.

With Covid-19 it’s the latter two – again. It usually is.

As a colleague put it recently, “With Covid-19, we’re all in the same storm – but not the same boat.” It’s tempting to think of this one as the great leveller. All countries are affected and we are all finding ourselves taking extreme and unexpected measures. In the same discussion, another wise thinker pointed out that, “Covid has reminded us that we are all equal”, adding the rider:

“Everyone is born equal, but our practices and the systems we have, do not give the same opportunities and treatment to all humans.”

The most recent figures from the UK Office for National Statistics show that Covid-19 is tracking deprivation. Almost twice as many people with Covid-19 live in the 10% most deprived places in the UK, compared with the 10% least deprived places.

The highest death rates are in the poorest inner-city London boroughs: Newham has 144.3 deaths per 100,000; Brent 141.5; Hackney 127.4 – very high rates are also found in the north of England in cities like Liverpool, Middlesbrough, Birmingham and Coventry (ranging between 77.5-81.8). It’s a massive contrast with the national average of 36.3 deaths per 100,000 – and 25.3 deaths per 100,000 people in the least deprived parts of the country.  If you are curious or questioning, as you should be, for the data sets see here.

I’m currently sweating out the lockdown in Hackney, in East London – where five times as many people are dying as in my usual affluent home by the sea in Brighton (27 per 100,000). It’s pretty easy to see why.

I’m one of the lucky ones – I’m staying in a spacious flat. I bite my tongue when friends tell me of their stressful weekends, stranded in their gardens. I have no outside space, and when I sit on my doorstep I look up at the 20-storey tower block. They have no balconies and the windows open very slightly, inward. Many days I hear children wailing, especially as the warmer weather approaches. And there are children in the street in the morning heading to schools that are open (only) for vulnerable kids and those whose parents are key workers; the children who can’t be home schooled on family computers.

The social housing estates I live next to are full of the people who still have to go out to work. They keep supermarkets open, drive our Amazon orders and Ubers, care for people in homes and hospitals.

As Sir Michael Marmot explains, these are not the middle classes who can move their work on to a laptop on the kitchen table. Marmot is the author of the landmark 2010 review “Fair Society, Healthy Lives” that pushed the UK government to take seriously the social determinants of health. His 10-year update of the report came out at a crucial moment and he is much called on to explain, patiently, how Covid-19 “exposes inequalities and amplifies others”.

The parts of the UK where Covid-19 deaths are highest are the places where people cannot afford to shuffle work laptops off their kitchen tables to make space for the organic food delivery. These are the places where obesity runs high – the least nutritious pre-packaged fare is cheapest – and where zero-hour contracts abound. They cannot benefit from the generous government “furlough” schemes – or remain trapped in underpaid frontline roles stocking supermarket shelves, working on construction sites (sneakily starting up again) and providing direct care without enough PPE.

Robin Gorna is an AIDS activist and feminist who has led global and local campaigns and organisations.