Mining-affected communities to be included in government talks about safety 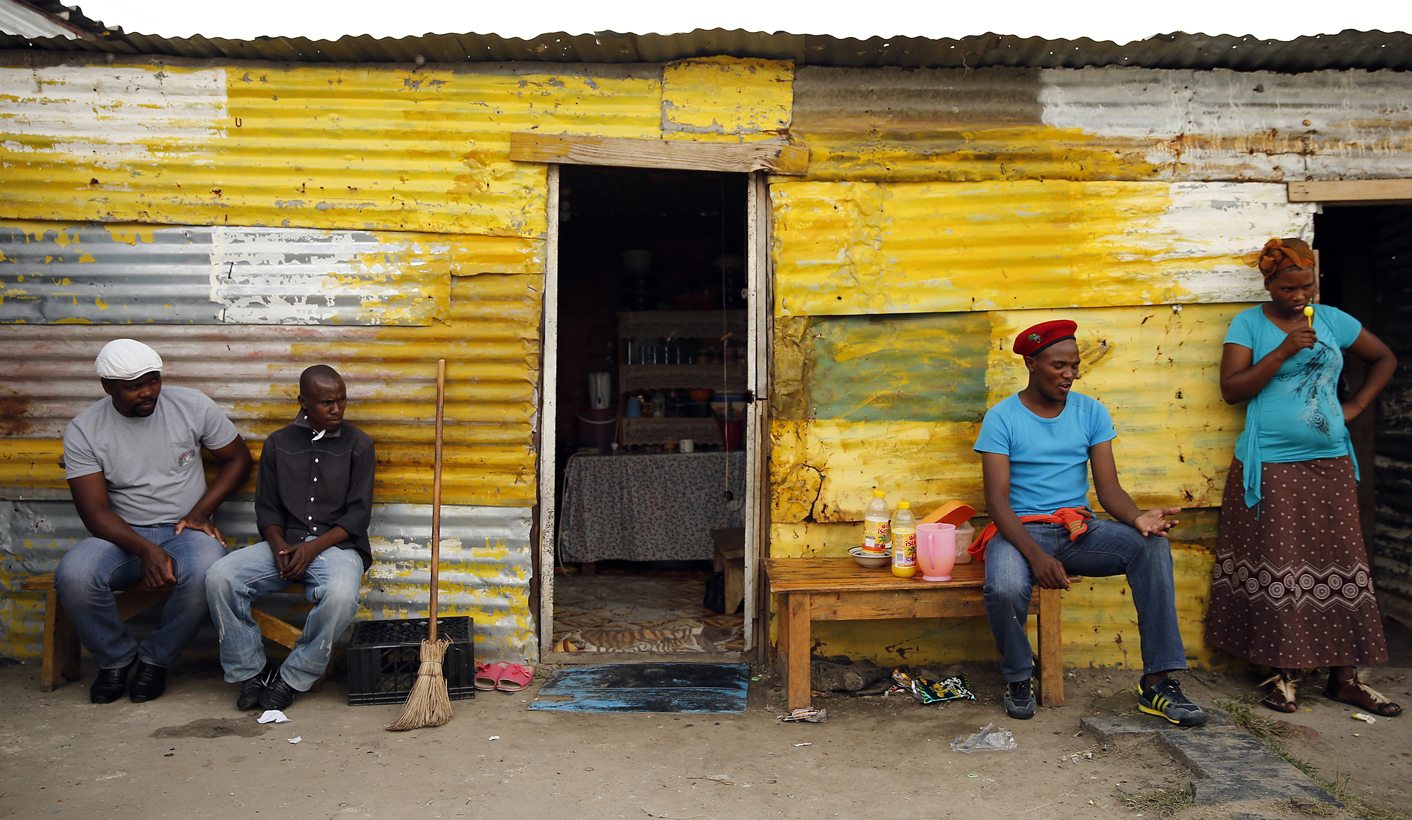 Residents outside their shacks in mining community Nkaneng near Rustenburg.

After weeks of advocacy and litigation, civil society organisations won a significant victory in the Johannesburg Labour Court after the judge ordered that mining-affected communities must also be consulted before the Department of Mineral Resources and Energy publishes guidelines on safety during the Covid-19 pandemic. Community organisations have raised their concerns that host communities face a catastrophe, especially given their lack of access to water and crowded housing situation.

Mining-affected communities and especially women face a “humanitarian catastrophe” if they are also not protected against the Covid-19 pandemic. This was the warning to the government from several human rights organisations in papers before the Johannesburg Labour Court last week as communities asked to be included in consultations on measures to protect mine workers against Covid-19.

On Monday 4 April, mining-affected communities claimed a significant victory following an order handed down on 1 May 2020 by Judge Andre van Niekerk, that government must have a “meaningful engagement” with communities before publishing a new notice setting out how mines must protect workers.

In his order, Van Niekerk set aside a decision by Minister of Mineral Resources and Energy Gwede Mantashe, not to require employers to draw up a code of practice dealing specifically with Covid-19 or issue guidelines.

Mantashe was further ordered to publish a notice containing both by 18 May. Before doing so, Van Niekerk added that he must consult with a number of experts, labour unions and mining-affected communities.

The current housing situation on mines and the lack of water to wash hands were highlighted in papers before court, drawn up by the organisation, Mining Affected Communities United in Action (MACUA), that were permitted to act as a friend to the court.

MACUA in a joint statement with another organisation said on Monday that they welcomed the decision by the court, but also asked for Mantashe to “be held to account”.

“But having to constantly run to the courts to access our rights, raises important questions about the democratic intent of the [department] and the minister and we call on the Portfolio Committee on Mineral Resources and Energy to urgently bring the executive and the minister to account for their continued violation of our constitutional rights,” said MACUA.

Last week, several civil society organisations wrote an open letter to the government expressing their concern over the exclusion of mining-affected communities from deliberations over safety measures and a lack of plans to have them protected.

Several mines have started ramping up production again, following the move from lockdown level 5 to level 4.

On 16 April 2020, Mantashe announced the amended National Disaster Act Regulations, including that there will be rigorous screening and testing of returning employees, quarantine facilities, the submission of testing data and transport arrangements for both national, and international employees. A further directive also noted that there must be consultation with labour unions over a start-up procedure.

Mesheck Mbangula, the national coordinator of MACUA, said in papers before court that historically, the mining sector in South Africa has been regulated and operating without any consideration for mining-affected communities both as sending and host communities.

“There was a lack of interest to avoid the potential negative gender impacts of mining projects. Over the years, communities have become significantly poorer as a result of mining operations around or on their land and have lost land, graveyards, and water streams and are sick as a result of pollution that they get from mining operations. Consequently, there was a growing need for the voices of oppressed and often overlooked mining communities to articulate their interests or face their continued exclusion and impoverishment. This could be achieved through a context analysis which recognised the impacts of mining on communities, and the active participation of communities in the decision-making processes that affect them.”

He explained that mining-affected communities would be left in a particularly vulnerable position as the phased re-opening of mines will vastly increase the exposure of host communities in particular to Covid-19 infections.

“In many cases, mine workers live in the same communities hence if they are infected, their neighbour, spouses and children in the community are also very likely to become infected. Secondly, even where mine workers are from other areas and mainly live on the premises of mining companies, they will use the same transport, services and shop at the same food markets as the broader community. The phased reopening will lead to far more interpersonal contact, not only on the mine site but also in mining-affected communities,” he added.

He said that despite a well-meaning legislative framework that has been put in place, many mining-affected communities continue to experience significant levels of poverty and systemic inequality.

He added that there were several factors that made it extremely difficult for mining-affected communities to practice handwashing and physical distancing to protect themselves against Covid-19 infections.

“Large scale mining, especially where labour is not recruited locally, often leads to a significant housing backlog, as is notorious in an area such as Rustenburg. As the case of Marikana has shown, the social and labour plan housing obligations in order to offset these impacts are often not complied with. The result in many mining-affected communities is crowded settlements exacerbated by the lack of water and services.

“At a time when physical distancing and staying at home is required to prevent the spread of Covid-19 infections, the lack of adequate access to housing and the necessary water, and sanitation is a recipe for a humanitarian catastrophe.

“Of particular concern during the Covid-19 pandemic and the exposure due to the reopening of mining, are limited access to health facilities (to treat patients), compounded by transport challenges.”

He said a lot of the domestic tasks, and especially accessing water, falls on the shoulders of women in mining-affected communities. “[T]he burden on women is likely to be compounded. Further, they will be exposed to the virus as carers of family members who are infected. Unless targeted prevention measures are put in place and health facilities are scaled-up in mining-affected communities, black working-class and poor women in communities are likely to suffer the worst of this pandemic.”

In a joint statement following the order by Van Niekerk, MACUA and WAMUA welcomed the decision.

“It has been a consistent practice of the Department of Mineral Resources and Energy (DMRE) to exclude communities from participating in the decisions that directly affect them, but we are pleased that court after court has affirmed our constitutional right to be recognised as interested and affected parties that must be ‘meaningfully engaged’. At the start of the lockdown, in what we described as a ‘diabolical conjuring of the dark arts of authoritarian governance, the Minister of Mineral Resources and Energy, published new amendments to the Mineral Resources Development Act (MPRDA) without proper consultations with mining-affected communities.

“This deeply undemocratic bent of the department has been consistently rejected by the courts and we are currently considering our legal options should they continue to exclude mining-affected communities and act in an authoritarian manner towards them.

“We hope that after yet another court pronounced on the constitutional injunction to include mining-affected communities in meaningful consultations, that the minister will put the interest of the country and its most vulnerable and marginalised citizens first, before that of profits and greed,” the statement reads.

Van Niekerk is expected to hand down a full judgement later this week. DM/MC