#LockedDown: Workers rights on the Covid-19 May Day 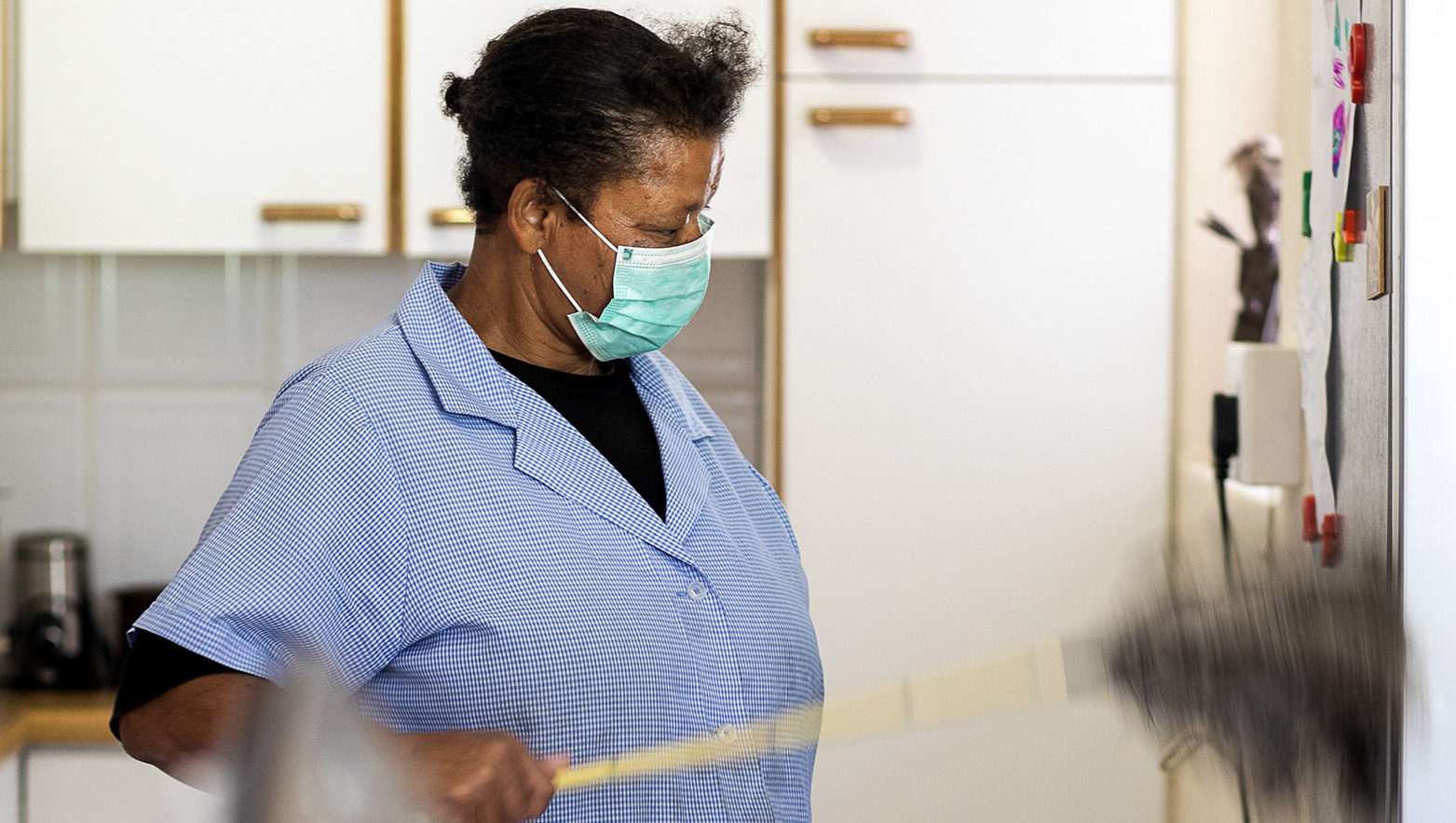 CAPE TOWN, SOUTH AFRICA - MARCH 18: A general view of a domestic worker washing her hands amid the coronavirus outbreak on March 18, 2020 in Cape Town, South Africa. It’s been reported that it’s the duty of employers to ensure that employees have a safe environment to work in – and they have a duty to inform each employee of the risk of catching coronavirus. (Photo by Gallo Images/Jacques Stander) (Photo:Gallo Images/Jacques Stander)

The government needs to recognise that all workers are essential if South Africa is to stand a chance of rebuilding its battered economy once the pandemic is over.

At the 5th national congress of the Congress of South African Trade Unions (COSATU) in 1994, President Nelson Mandela said, “The kind of democracy that we all seek to build demands that we deepen and broaden the rights of all citizens. This includes a culture of workers’ rights.” Mandela’s words signalled unequivocally the importance of workers for the sustainability of the project of democracy the country was embarking upon.

Workers’ Day falls on 1 May and is observed globally. It is recognised as a result of the struggle of trade unions for the realisation of workers’ rights in factories, shops and society as a whole. Last week, South Africa commemorated Workers’ Day in the midst of a lockdown, preventing celebrations or demonstrations from being held. Nevertheless, 1 May this year was perhaps more significant than in previous years.

This year the role of ‘essential workers’ is critical. They are needed in order for us to survive the Covid-19 pandemic as a nation. Medical practitioners, community health workers (CHWs), sanitation labourers, farmers, food retailers, petrol attendants, the SAPS, SANDF,  drivers of all forms of public transport and, of course, journalists are seen as pivotal in heeding the president’s call to be on frontline duty.

Because of the unprecedented impact of the coronavirus, never has the role of the humble worker been so lauded as key to the survival of our people and the economy. Yet, the spread of the virus has simultaneously put millions of people’s health and jobs at stake. Essential workers, particularly in the health industry, have been called on to keep working despite the risk to their lives and the lives of their families.

On Thursday 30 April the C-19 People’s Coalition issued a statement demanding that the safety and security of all health workers be protected. A day later, to mark 1 May,  a number of trade unions, the Treatment Action Campaign (TAC) and CHWs picketed outside Chris Hani Baragwanath Hospital. The statement cited incidents of healthcare workers not being given the requisite personal protective equipment (PPE) to protect themselves. Among other things, they called for the government to ensure that all medical practitioners have the necessary PPE when caring for patients, whatever the cause of illness. They also called for the proper training of CHWs and that all frontline healthcare workers be screened and tested for Covid-19 as a matter of priority.

The signatories to the statement warned that should this not be acceded to, there would be “industrial action”.

It may well be that strike action is the last thing we need in the middle of a pandemic. We should ask, however, are their demands for the government to provide a safe working environment unreasonable? Perhaps the real question is, what would the consequences be of medical practitioners not having the adequate protective measures?

Therefore, while we implore health workers not to disrupt healthcare services at this critical time, we also implore the government to be absolutely transparent about its plans to provide PPE, testing and other assistance.

On the flip side of the coin, there are many people suffering from the stress of possibly not having jobs to go back to after lockdown is lifted – and of having no food during lockdown. According to a Nedbank group forecast, an estimated 1.6 million jobs are likely to be lost as a result of the lockdown.

What do we say to these men and women?

These are the less celebrated workers, yet they are equally vital to maintaining the precarious economic balance in our country. They are the painters sitting outside Builder’s Warehouse with handmade cardboard signs – people you’ll hire for a few hours or maybe a day or two. They are the gardeners who prune our hedges twice a week. The construction workers who crowd onto bakkies in the hope of laying bricks for a week to earn some income. The domestic workers who clean our houses and look after our kids.

Who is speaking up and helping to organise these informal workers, already living on the breadline?

The struggle for the protection of the working class should not be divided between those in formal and informal employment.

According to a statement published by 10 organisations representing the informal sector, five million workers are likely to be impacted by the pandemic. The statement says the informal sector accounts for 30% of South Africa’s employment. However, most informal workers are not registered with the Unemployment Insurance Fund (UIF), nor do they have access to the Compensation for Occupational Injuries and Diseases Act (COIDA).

While the government is making relief funding available for formally employed workers, such as those represented by trade unions at NEDLAC, it remains uncertain what becomes of the informal labour force.

According to the 10 organisations, “This means that in the current coronavirus crisis, where our jobs are at high risk, we have no social security to fall back on. And most of our employers ignore the law with regard to paid annual and/or sick leave. We have little or no expectation that our employers will follow either the Covid-19 Advisory or the Workplace Preparedness Guidelines published by the Employment and Labour Department …”

The problem is that the relief offered outside of employment will also be insufficient. Government has announced a number of relief package interventions, according to a statement by the Budget Justice Coalition (BJC), but these are ‘insufficient and inequitable”. They say the grant is exclusionary – the criteria required includes having a South African ID, proof of residence and banking details. This immediately rules out millions of people, most of whom are in the informal sector and live in informal settlements.

According to a recent survey by the Human Sciences Research Council (HSRC), “More than half of residents in informal settlements and townships have run out of money for food. This equates to around 15 million people in South Africa right now who are experiencing hunger.” While the government has announced that it would be making 250,000 food parcels available, this is clearly not enough.

There is no ‘right to work’ clause in our Constitution. Yet we all know that being able to work and earn an income gives people a sense of purpose and dignity. Even before Covid-19, millions of South Africans were denied this opportunity. Now that millions more are in the same predicament as a result of the pandemic, it’s even more important for the state to recognise the rights of workers now and in the future.

After all, it will be the workers – essential or otherwise – who will rescue and then rebuild South Africa as we emerge from this dark chapter. DM/MC

Zukiswa Pikoli is a Maverick Citizen journalist based in Johannesburg.